No, not Adelaide comfortably winning games. I’m all for that to continue ad nauseum, thanks very much.

But it could become a tad tricky to maintain the required degree of despondency in these weekly missives if the Crows continue to win well week in and week out – and particularly if Port keeps chipping in with gallant defeats to boot.

With any luck, their gallantry will taper off as their year unravels.

Also, what’s the deal with Dan Houston? For the second week in a row, he has cost some poor bloke $1000 courtesy of the Match Review Panel for being on the receiving end of some rough treatment. Now, I’m not about victim blaming or anything, but I don’t think it’s a stretch to see the common denominator here. Houston, we have a problem…?

Anyway. Port aside, I’m nonetheless wary that it will become harder to convey the herculean burden of supporting a team that has not genuinely challenged for a premiership in almost two decades through this emerging tone of smug triumphalism.

Perhaps the way to mitigate this is to feign complete nonchalance about it all.

Which should be straightforward enough. 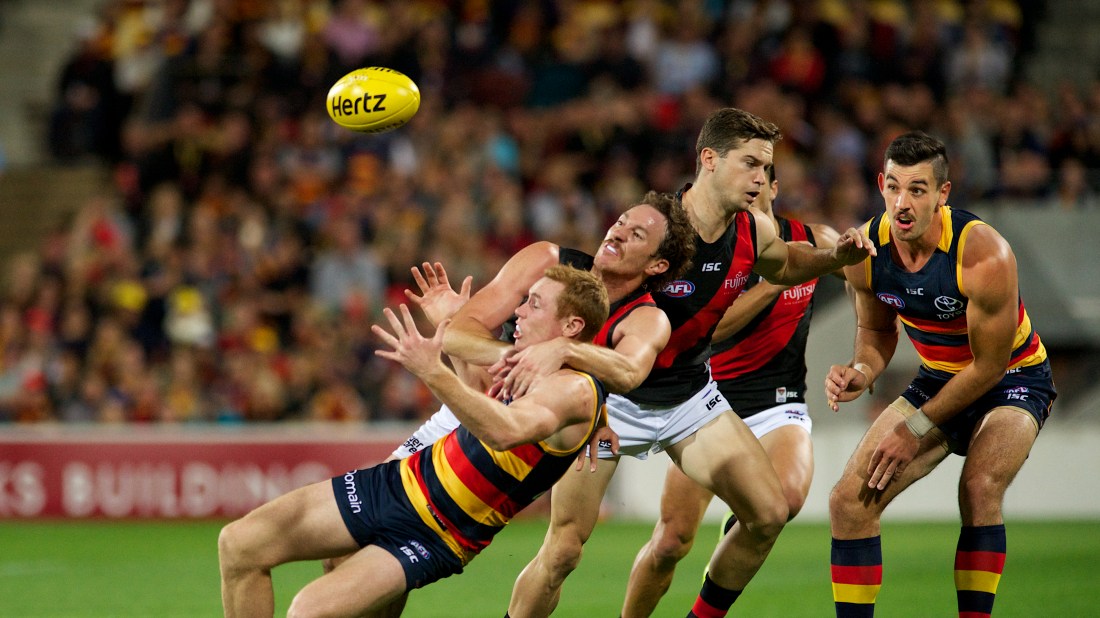 The trick is to feign nonchalance. Photo: Michael Errey / InDaily

After all, I may be a one-eyed supporter but I’m also a strangely half-assed one.
For instance.

I am currently holidaying on Queensland’s Sunshine Coast, an engagement that prompted me to miss the Crows’ relative demolition of Essendon on Saturday.

As luck would have it, though, they happen to be playing Gold Coast this Saturday, at a venue only a couple of hours’ drive from where I am currently staying.

Which would all be very serendipitous. Were it not for the fact that I am flying back to Adelaide the previous day.

Unlike Harley Bennell, my trip to the Sunshine State was uneventful and passed without incident

Whereas some football supporters structure their annual peregrinations to ensure they coincide with their team’s away fixtures, mine seem almost painstakingly calculated to avoid any such scheduling symmetries.

Which makes a bit of a mockery of the lengths to which I otherwise go to ensure I watch my team play.

A few short years ago, this would have involved seeking out the only pub on the Sunshine Coast with both the means and inclination to broadcast an AFL game involving neither Queensland-based side.

Fortunately, these days one’s effort need extend no further than hunching over one’s iPhone for an evening, extricating oneself only to refresh one’s beverage or to update one’s long-suffering companions on proceedings with the approving utterance of a single word: “BETTS.” 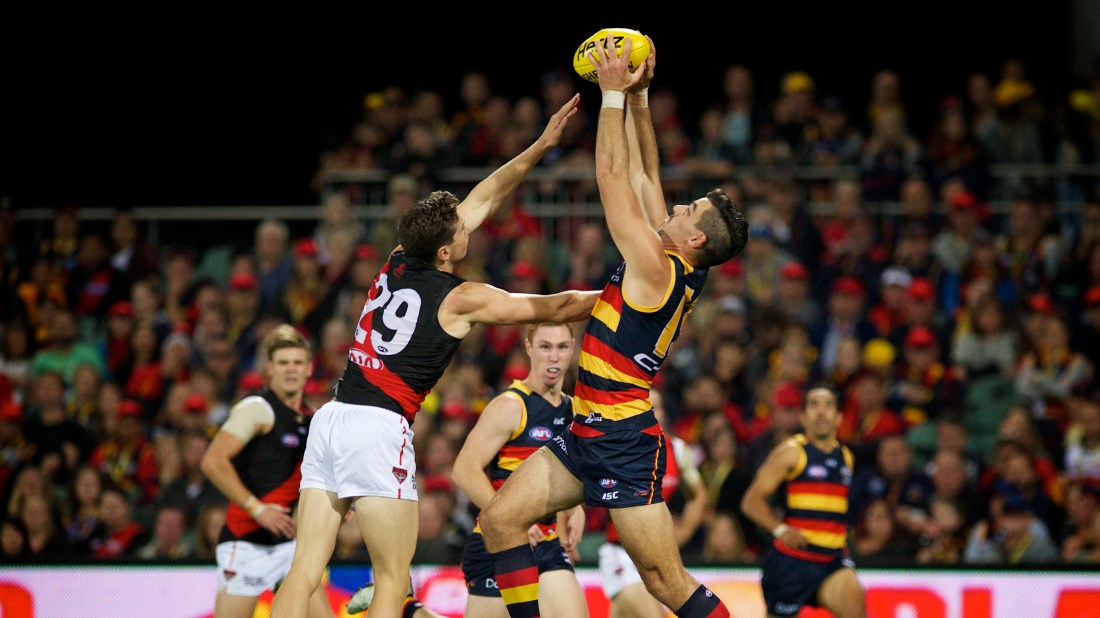 Eddie and Tex managed 11 goals between them, which was almost as many as Essendon managed in total.

The Bombers’ 88 points was, in truth, a decent enough tally, but one the Crows still managed to better by almost another 11 goals.

Funnily enough, as I’ve mentioned before, 88 points is a bit of a recurring theme in our history with Essendon.

In 2005, for instance, we smashed them by exactly that margin – 151 to 63 – which felt like a pretty impressive trouncing at the time.

Two days shy of a year later, however, we played them again, and it turned out that 88 points wasn’t really such an impressive margin after all.

And then Adelaide went ballistic with a 10 goal-to-one final term, in which Trent Hentschel – alas, poor Hentschel – kicked four straight (of his eight for the game) in one particularly inspired burst, as we buried the Bombers by 138.

Why do I remember this? If nothing else, because it could well be the last time it genuinely felt like we could be on our way to a flag. Which is as good a reason as any to continue keeping a lid on things after four rounds in 2017.

Three months later, of course, in the midst of a nasty three-round losing streak, Hentschel did his knee in a horrid outing against Port Adelaide.

He wouldn’t play again till 2009, and only managed another ten games.

Hentschel was a sort of cult hero (or anti-hero?), the likes of which we have not seen since

I have written in these pages about how it’s difficult, especially in hindsight, to truly relish games – even the most euphoric of victories – because understanding their true context only reveals them as another step along the annual path to heartbreak and mediocrity.

One exception to this, though, was Hentschel’s comeback match in Round 20 of 2009. He had first returned to the game in Round 1 of that year, but lasted only two rounds (or part thereof) before his troublesome knee flared up, once again cruelling the best part of yet another season.

So there was a lot riding on his eventual return against Hawthorn. Not least because, with three rounds to play, the club was still searching for its 12th win of the season that would more or less ensure it a finals berth.

Thus, when we found ourselves down five goals to one by the end of the first quarter, it’s safe to say we weren’t feeling all that good about life in general.

And then Hentschel came back to life.

It wasn’t the four goals in almost as many minutes that he had so effortlessly dobbed against the Bombers three years and 10 rounds earlier.

But, after everything, it was perhaps the best four-goal game a Crows forward has ever produced.

It was one of the most feelgood wins I can recall; so much so, that the fact we were suddenly finals-bound seemed almost an afterthought.

Hentschel played every remaining game that year – three more big wins and then that bastard of a loss to Collingwood – but he only managed to take the park for the first three rounds of the following year before his injury woes forced him out of the game for the final time. Regardless, that one win against the Hawks felt like a lone oasis of vindication, like Jason McCartney’s comeback/surprise farewell against Richmond.

As the dismal 2010 season sputtered out, Hentschel stood on a motorcade for a farewell Footy Park lap beside three fellow retirees – a dual-Norm Smith medalist, a premiership star turned club captain and probably (at the time) our most exciting forward since Modra. But I’m quite certain the cheers that night were every bit as loud and warm for the kid they used to call “Potential” as they were for McLeod, Goodwin and Burton, two of whom represented the final passing vestiges of our premiership era. 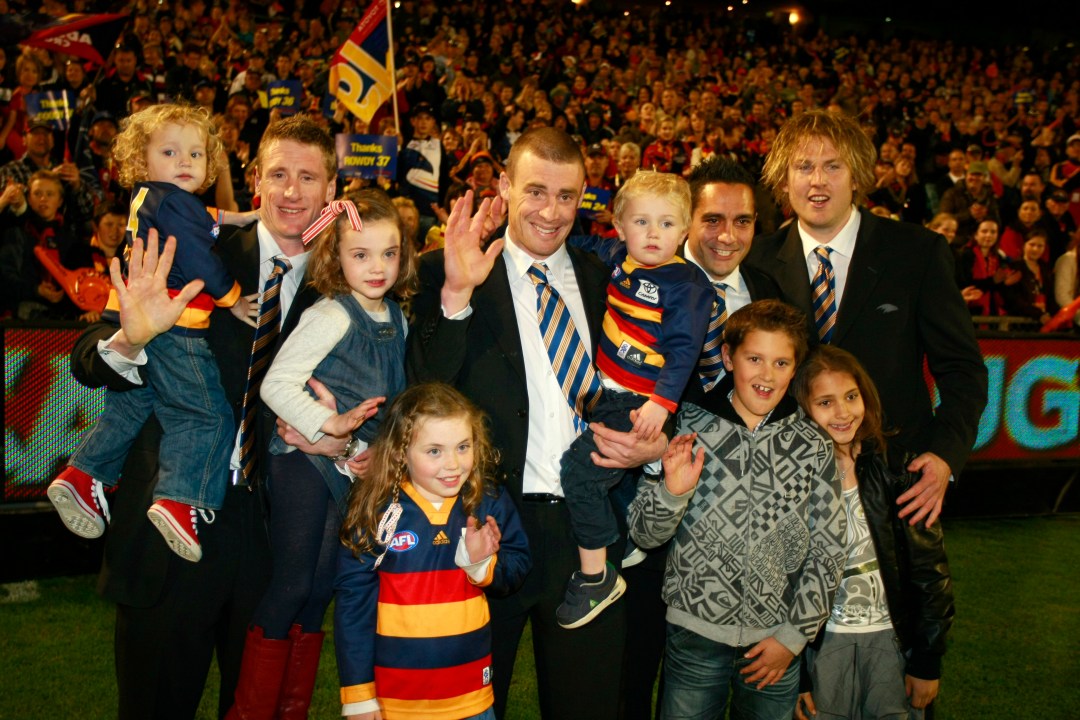 ANTI-HERO: Hentschel (right), with Burton, Goodwin and McLeod on their retirement in 2010. Photo: James Baker / AAP

Hentschel was a sort of cult hero (or anti-hero?), the likes of which we have not seen since. At least until Eddie Betts, albeit for entirely different reasons. Eddie is sort of like the yin to Hentschel’s yang.

While we love Eddie for the freakish things he can do, and the effortlessly incandescent way he does them, Hentschel was clutched to the proverbial bosom of football fandom because of the things he could no longer do, despite his fruitlessly dour determination that it could be otherwise.

Perhaps it was apt that he was in some ways the symbol of that post-‘06 era, that promised so much but fell away into grim futility.

And perhaps, moreover, it is apt that Betts is the symbol of our current heyday, if that is what it is.

Certainly, there has rarely been a time when this club has hummed along so tunefully, and with such vim: a premiership to the Women’s team, two tight wins to leave a talent-laden reserves side undefeated in the SANFL and the senior side without loss a month into the AFL season. 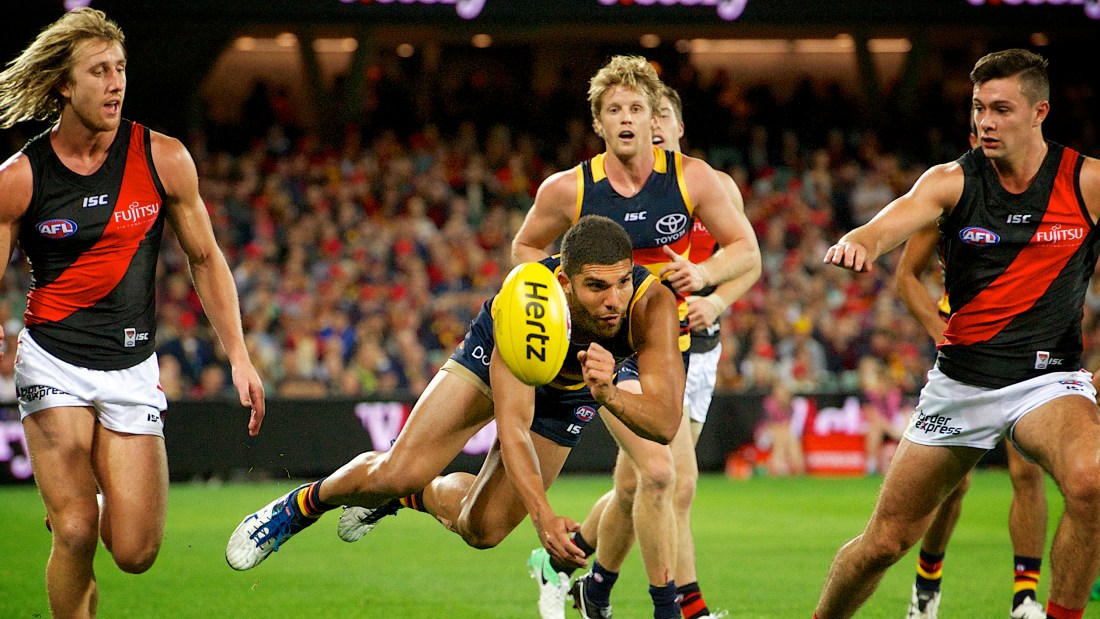 The logo on the football sums up how Curtly Hampton will feel when he hits the deck after this handball. Photo: Michael Errey / InDaily

Much has now been written and said about the various incarnations of racism that reared their foul heads at and after the Showdown, and no doubt many casual supporters reached the point where, like Tex Walker last year after Eddie McGuire joked about drowning a woman in an ice bath, they were simply sick of hearing about it.

It was just a few idiots, they might argue, and it was over a week ago. Move on.

And all the other dozens of indigenous players in the AFL, and every other football league around the country, and all their teammates, friends and families.

They’re all sick of it too. 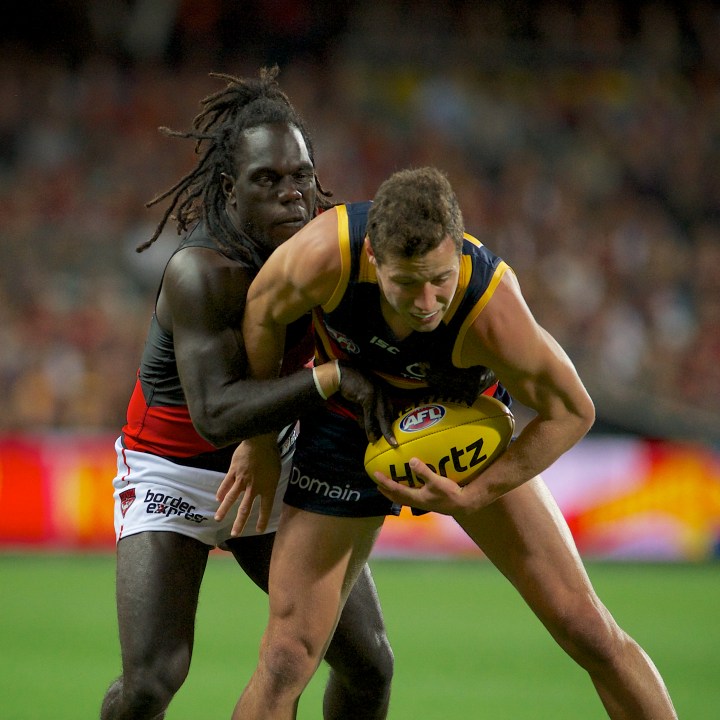 Anthony McDonald-Tipungwuti, one of Essendon’s best against the Crows, is also sick of it. Photo: Michael Errey / InDaily

Human Rights Commissioner Gillian Triggs (not to be confused with Steven Trigg, albeit both tend to elicit similarly strident responses in certain niche circles) recently got vilified by the Oz (as she is wont to do) for suggesting it was unfortunate that people were entitled to be bigots in their own homes.

“Sadly, you can say what you like around the kitchen table,” she lamented during a speech in Hobart.

Last week, a certain 31-year-old western suburbs dweller – a Port supporter, although we shouldn’t hold that (of all the things) against her, and certainly not against them – decided the kitchen table was too narrow a forum and decided to vent her bigoted spleen in a more public milieu.

She probably should have paid more attention to Gillian Triggs, because that decision has since landed her with what Harold Macmillan might have described as “a little local difficulty”.

The prime target of her bile, however, did what he is wont to do; quietly stood in defiance through the week’s off-field circus, and then took the Adelaide Oval stage and lit up the arena with his brilliance.

None of which I actually saw. Being in Queensland and all. 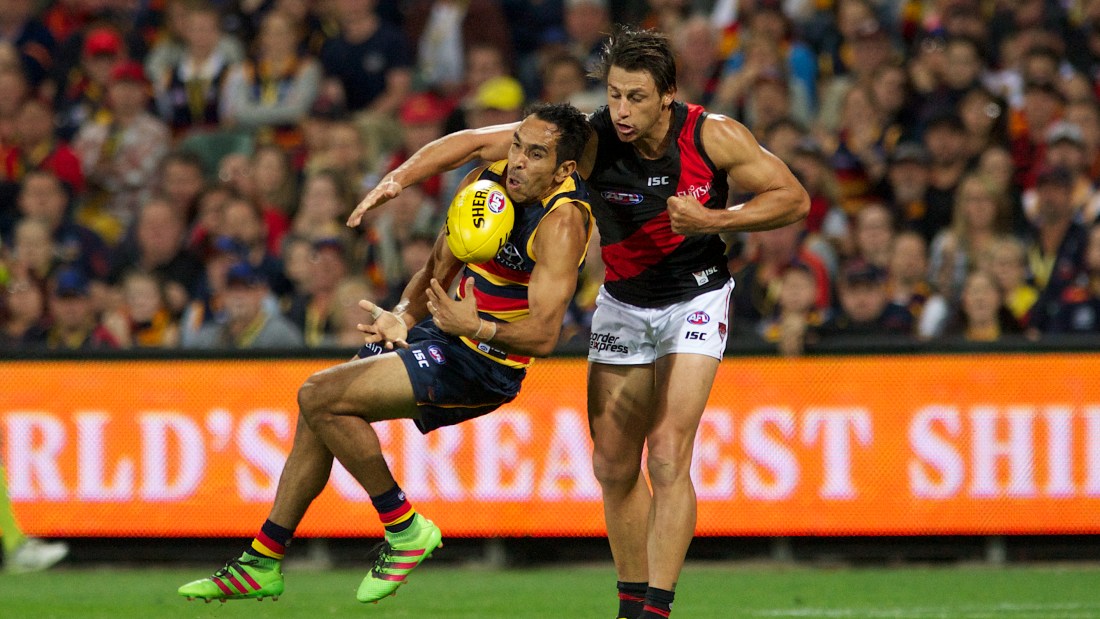 Fortunately, unlike Harley Bennell, my trip to the Sunshine State was uneventful and passed without incident.

Nonetheless, whenever you travel by plane – and despite being well aware that statistically you will almost certainly arrive at your destination safe and well – you tend to spend a disproportionate amount of time envisioning the opposite fate.

And so it is with football.

Even though intellectually I know that the odds of us losing to Gold Coast this week are astronomical, I will still, regardless, spend several hours over the ensuing days fretting about all the things that could possibly go wrong.

After all, it would hardly be the first time, would it?

But at the very least, if and when it does, I won’t be there to see it in person. Not this time, anyway.

Touch of the Fumbles is InDaily’s weekly AFL column, usually published each Monday during the AFL season. Yes, it’s shamelessly biased. Even up the score in the comments section below.