After all, there was plenty of precedent.

There was the yarn in The New Daily about Mark Latham being appointed the federal government’s Free Speech Commissioner.

Then the TV Tonight blog broke the ‘news’ that Kochie had been locked up in Honolulu over visa irregularities (I’m assuming the Port team actually took this to be genuine, which would explain why they were so buoyant yesterday).

And thus it appeared in the same spirit when match reports started appearing from the Saturday April 1 arvo game at the MCG, detailing how the Crows managed to haul in the Hawks, thanks in large part to the game-breaking magic of David Mackay.

Now, if you’ve been paying close attention you may have noticed the odd occasion on which this column has been Less Than Fulsome in its praise of the Crows’ Number 14.

Perhaps it was the fact that he followed his breakout game in 2009 (that hideous final against Collingwood whose very mention is wont to trigger a catatonic lapse into the fetal position) with almost a decade of not-very-breakout games.

Sure, once a year or so he’ll pop up with a solid outing; his 23 touches and 13 tackles against the Dees in 2015 is one that springs to mind. After that game, the late great Phil Walsh even singled him out for his “ultimate toughness”.

“I said to the guys at three quarter time: ‘Did you see what D-Mac did? If you all emulate that we’re not going to lose this game’,” Walsh revealed after the win.

Unfortunately though, one would be safe to say the phrase ‘Did you see what D-Mac did?’ has been more often than not uttered in dismayed bemusement than awestruck admiration over the years.

He has, at times, drawn the kind of crowd commentary that used be reserved for the likes of David Gallagher.

And, yes, there have been times when his highlights reel better resembles a cautionary tale of what not to do to avoid losing games. Passing backwards over the head of the only teammate between you and the opponent’s goals, for instance.

But, after 164 somewhat frustrating games, the Adelaide Football Club coaching staff’s seemingly-inexhaustible patience in the David Mackay Project was finally vindicated at the MCG on Saturday.

Indeed, I’d go so far as to say that he is now probably The Greatest Crows Player Of All Time. 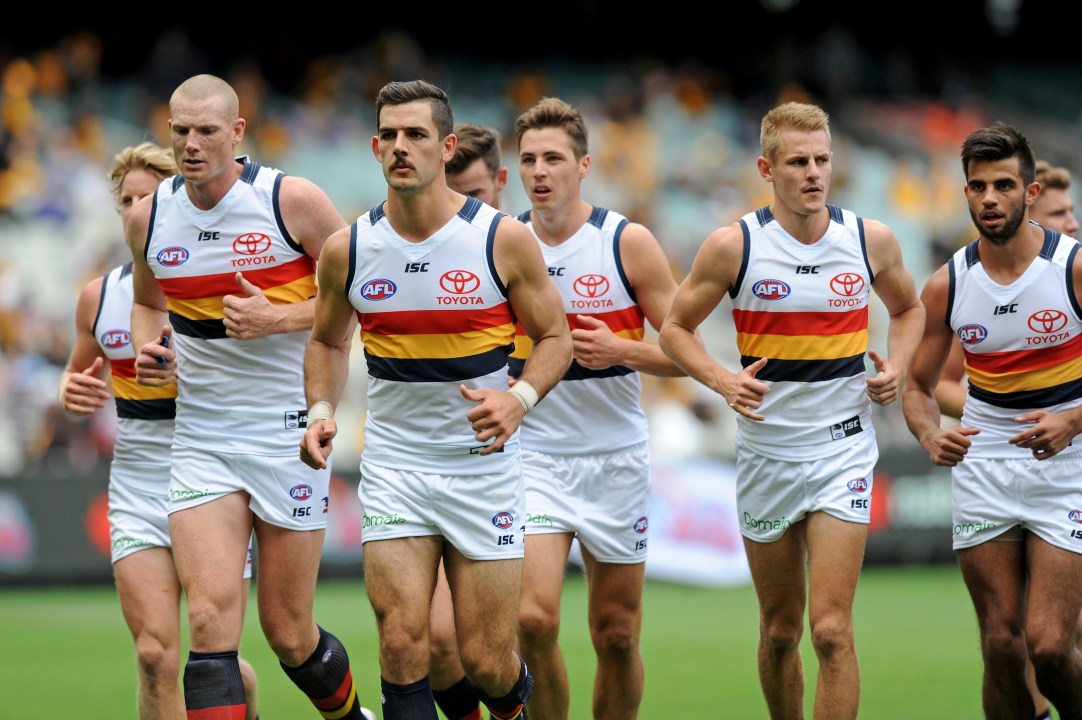 His three goals, including two that broke the game open in the last quarter, were match-defining.

And even though he also managed to hand a fourth goal off to the opposition, I think we’re all agreed that free kick for in-the-back to Puopolo was more a case of the umpires struggling to accept the passing of the Hawthorn era than a genuine faux-pas on D-Mac’s part.

In all seriousness, Mackay has now strung two very solid matches together this year, which either means he’s due a shocker in the Showdown or, just possibly, that his game is beginning to flourish now that he’s no longer the only player with enough pace to play on the wing.

Over about three years, through some very deliberate recruiting, the Crows have gone from a team for whom pace was their Achilles Heel to one for whom it is their… what’s the opposite of Achilles Heel? Tennis Elbow? Green Thumb?

Anyway, we have gone from being a notably slow side to a notably fast one.

And we’ve done it notably quickly.

There was a point, in the latter days of Sando The Snake Oil Salesman, that I put the befuddling riddle of Mackay’s continued presence in the side (not to mention the club’s eagerness to lock him away on a half-decade contract) down to the fact that he was the only midfield type with a higher gear than “lumber”.

But now, with the likes of Cameron, Milera, Knight, Hampton and at least one of our glut of Rories in the side, perhaps the D-Mac is enjoying being liberated from his role as the token fast guy in the slowest team in the league.

We should probably sign him up for another seven years right now.

He wasn’t however, best on ground, nor even the most influential.

That honour probably goes to Sam Jacobs, albeit that for most of the match he appeared to be trying to explain to Ty Vickery how to ruck. 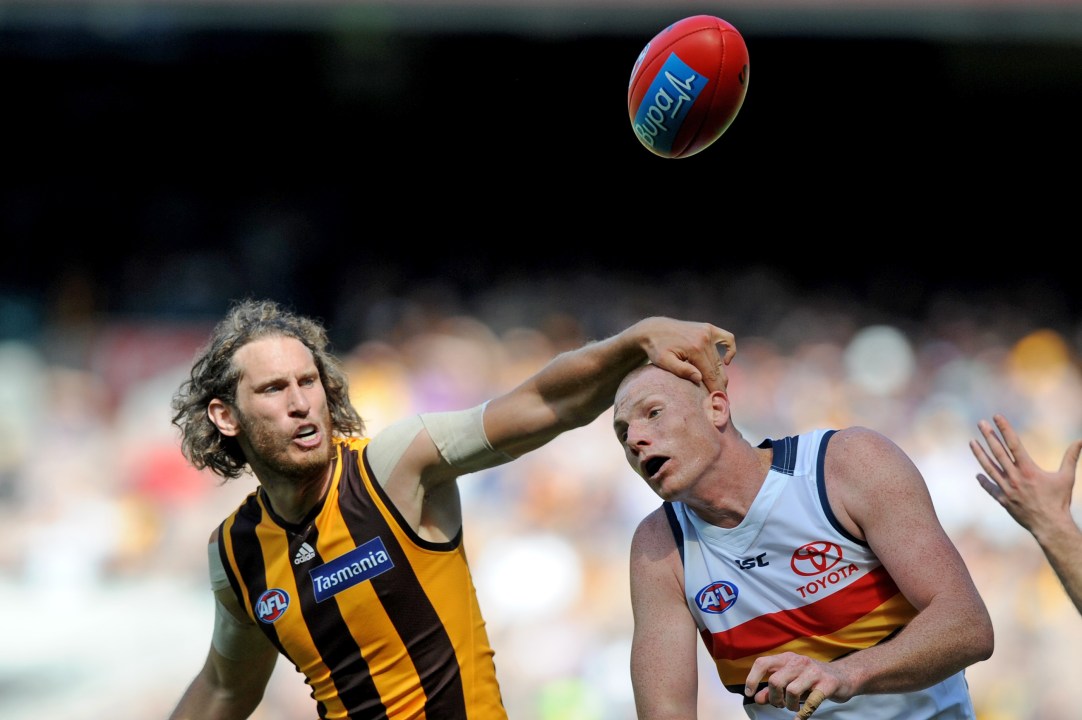 I know that lots of things have changed for both Hawthorn and Richmond since last season ended, but it still seems entirely possible that the sole factor separating the Tigers’ 2-0 start and the Hawks’ winless fortnight is Tyrone Vickery.

Jacobs’ effort was all the more worthy given his fellow tall Josh Jenkins left the field early in the first quarter with what appeared to be a serious medical emergency. Luckily, scans eventually ruled out any broken bones or punctured lungs, and the injury was downgraded to a far less serious condition known in the medical fraternity as ‘Sore Tummy’.

Been a long afternoon but took great pleasure in watching my 21 team mates get the job done. Great stuff fellas! #GoCrows pic.twitter.com/ovJl22xVB9

Eerily enough, last time we beat the Hawks (six years and as many coaches ago) we also lost a player to injury early in the first term, although Jason Porplyzia did at least manage to kick a nice goal before popping his shoulder.

That was somewhat more than Jenkins managed before the hulking 200cm, 108kg ruck/forward fell foul of Hawthorn debutant Teia Miles (180cm and 70kg, just FYI) – although to be fair his one handball was delivered at an impressive 100 per cent disposal efficiency.

Still, back in 2011 we ended up losing Porps for the season, whereas JJ is currently still in the frame to play this week’s Showdown, so we can’t complain.

And if playing Port needed any more spite, they also managed to knock us off top spot on the ladder with their homeground romp over the hapless Freo.

Luckily for Dockers fans, the club recently had the foresight to lock in Ross Lyon on a contract of David Mackay-esque proportions, so they only have another four years of this type of display to look forward to. 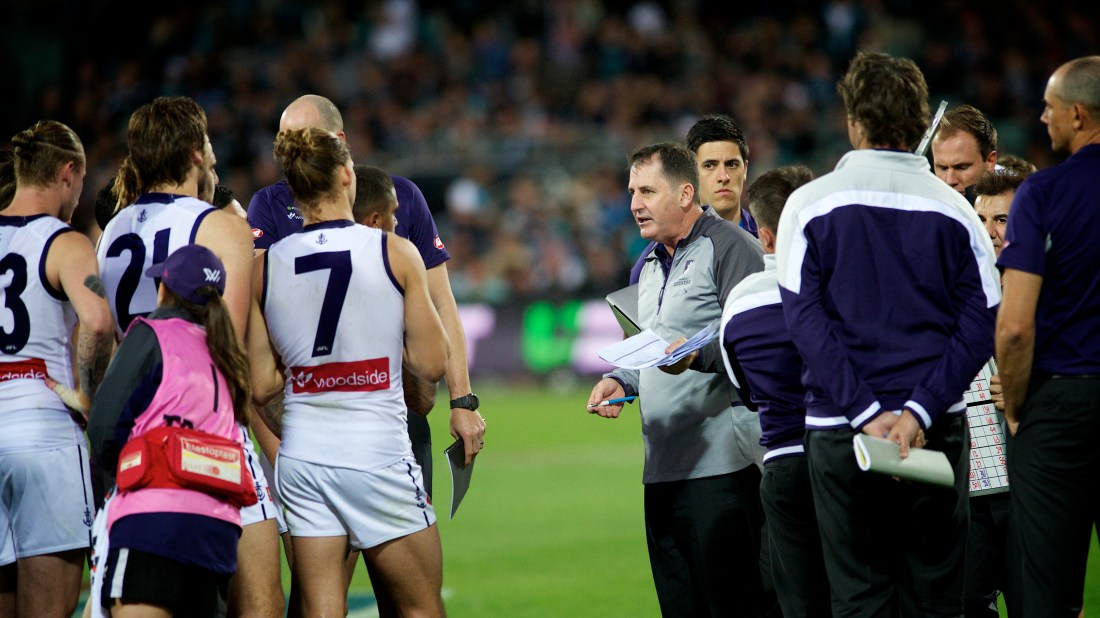 Much as it’s hard to get a reading on a team doing training drills around proverbial witches’ hats, the Power, it must be said, looked good. Ominously good.

And with Paddy Ryder back in the midfield and Charlie Dixon finding form up forward, it’s possible they could finally recapture that elusive lost mojo of their infamous 2014 season (when, of course, neither Ryder nor Dixon was actually on their list). 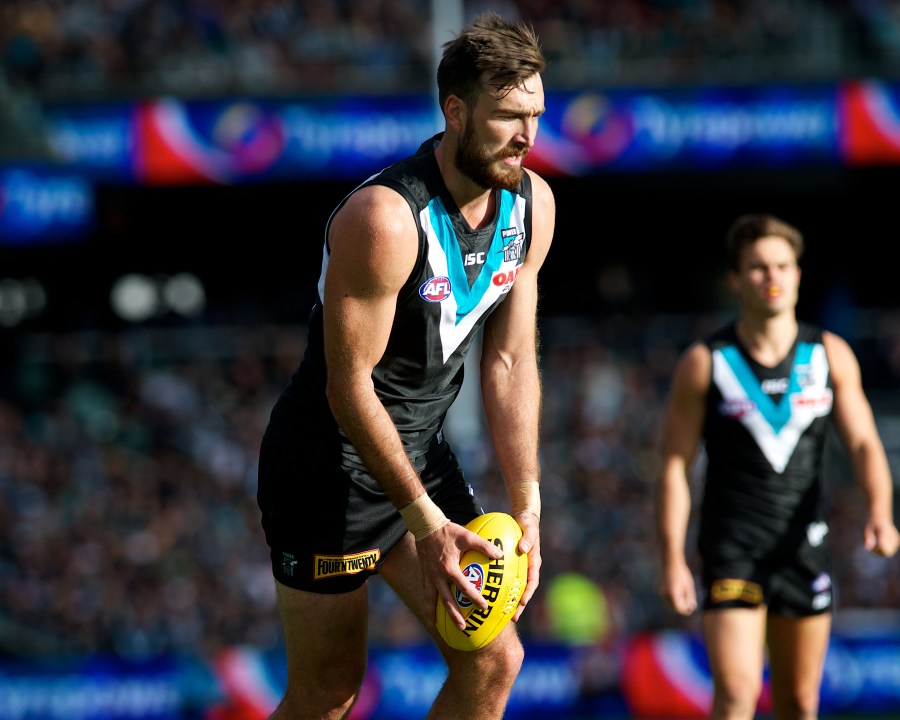 Dixon, recapturing the form of 2014, when he didn’t play for Port Adelaide. Photo: Michael Errey / InDaily

Ollie Wines may be a dead-ringer for Joffrey from Game Of Thrones (and be just as irritating) but he’s far less inclined to run from a battle, while Sam Powell-Pepper plays more like a grizzled 200-game veteran than a second-gamer.

It’s probably too much to hope that his first two AFL games have been some kind of career aberration, and that his star will dim considerably, ideally before this weekend. But that prospect currently appears about as likely as Matthew Lobbe getting a senior recall. 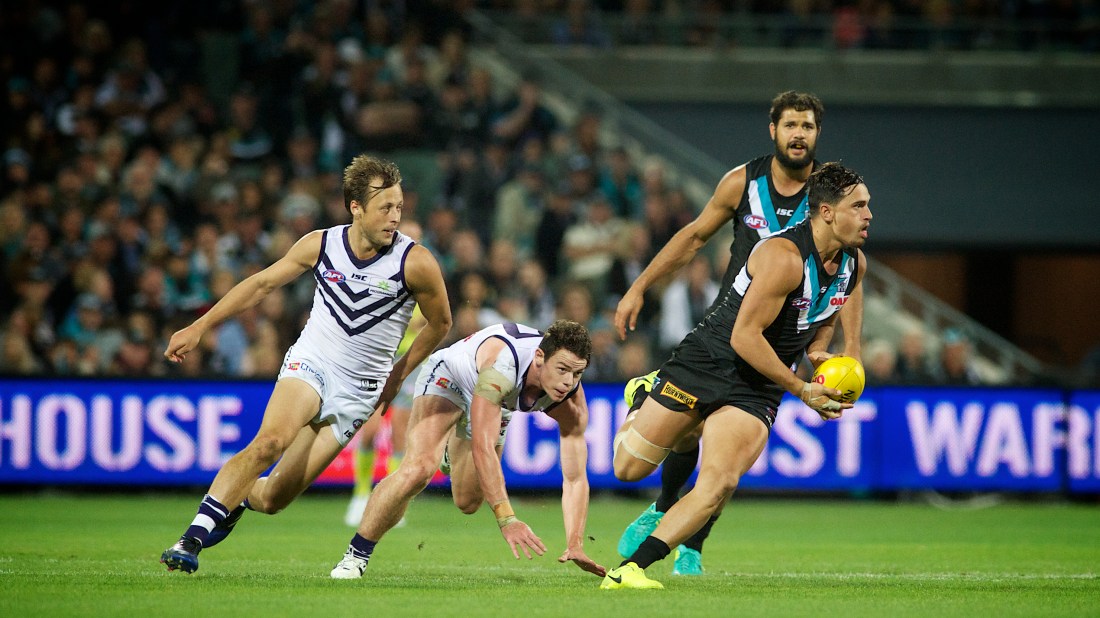 Jarman Impey played his first game since a Certain Unfortunate Vehicular Incident – which I am far too diplomatic to mention here.

Anyway, he quickly put it behind him, accelerating across Adelaide Oval with the hapless Freo players looking like parked cars in comparison.

Oh sorry, that was probably a poorly-chosen analogy.

At any rate, his first-quarter set-shot goal dented the Dockers’ pride as their afternoon quickly degenerated into a car-crash. 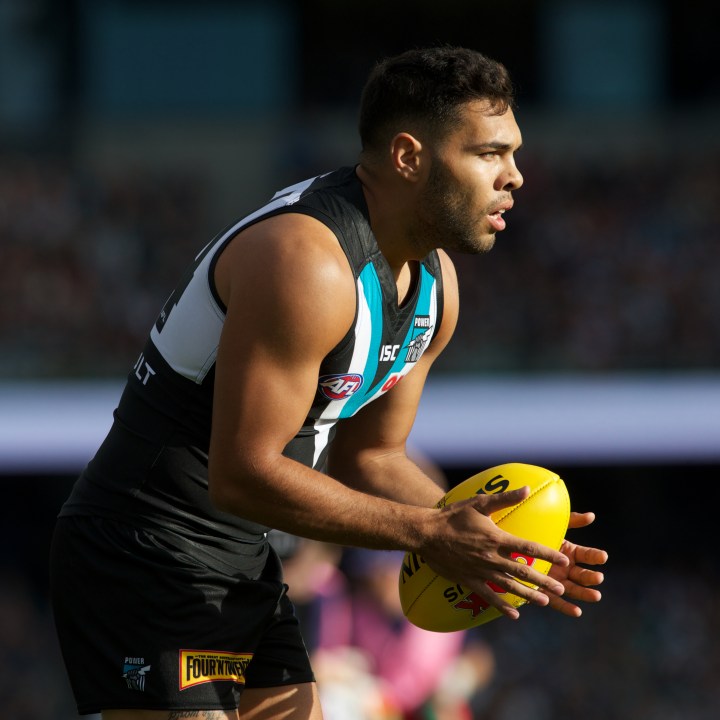 Anyhoo, Port aside, t’was a splendid round of football; even Paddy Dangerfield leading Geelong to a comeback one-point win didn’t put a dampener on my weekend (NOTE: It actually did – it ruined it completely and I stewed about it for the rest of the afternoon).

But it was only two years ago that we were in a similar position after two rounds, and we soon fell back into the waiting pack, in part on account of a particularly annoying Showdown loss.

So it would probably pay not to get too far ahead of ourselves.

But we can only hope that this week, when we use the inevitable phrase ‘Did you see what D-Mac did?’, it’s spoken with that newfound and strangely appealing sense of approval.

I could yet get used to it.