It seemed like the right moment to check in.

Anyway, I hope you’re still loving life in Sydney, Kurt. It’s a great place to live. I hear the power mostly stays on when it rains, which is a huge bonus.

Hey, here’s a good one for you: why is South Australia’s electricity supply like the Sydney Swans? They both switch off under pressure.

I just thought of that one, Kurt. You might get a laugh with it during the off-season (or maybe not).

But anyway, as Andie MacDowell said to Hugh Grant at the end of Four Weddings and a Funeral (while similarly standing beneath a downpour): “I just wanted to check you’re okay…?” 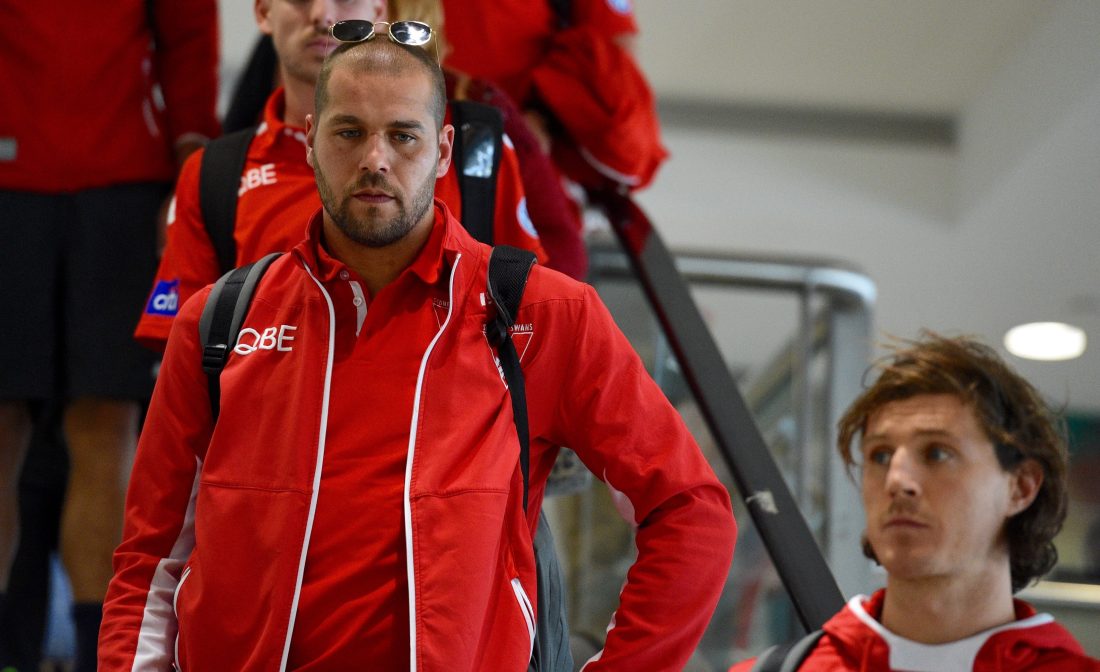 “At least I kicked a goal…” The Swans’ ‘Bondi millionaires’, Lance Franklin and Kurt Tippett, arrive back in Sydney after another Grand Final loss. Photo: Mick Tsikas / AAP

Because I’m sure you’re well sick and tired by now of all the moving and lyrical reflections on the Bulldogs’ incredible triumph.

Even I thought it was great, and there was a period there in the late ‘90s when I disliked the Bulldogs almost as much as Port Adelaide, which is really saying something.

But (and here’s the rub, Kurt) as with all things, there comes a time to let the hatred go; a time when you realise you’ve held a pointless grudge just a little bit too long.

And, with the Bulldogs, that time arrived when it dawned on me that their most objectionable villain was so long retired that his son was actually one of the current team’s better players.

Still, at least the elder Liberatore humoured us by re-living one of the great finals moments on the weekend – jumping into the arms of the nearest person to celebrate a goal that turned out on closer inspection to be a behind. 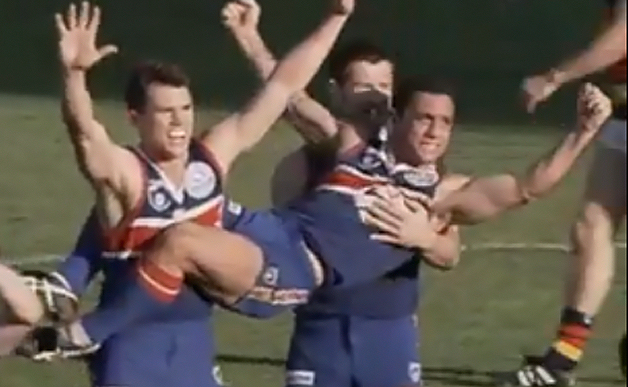 Tony Liberatore has a history of premature celebrations.

This time, of course, it was Jason Johannisen – the guy whose goal on the siren in Round 15 delivered one of the Swans’ more unlikely defeats this year – who kicked the most cathartic goal ever in Grand Final history, only for it to be overruled on video review.

Still, he did end the day with two medals round his neck – instead of one giant millstone, Kurt.

If you’d told me at the start of the season that the Norm Smith would be won by the bloke who had the most clangers of the game, I’d have naturally assumed you were talking about Paddy Dangerfield taking best on ground in a routine Cats premiership.

Thank God, there was nothing routine about this one.

A team, as you’ve no doubt heard ad nauseum, that has not won on Grand Final day since the Menzies era.

A team with no key forward to speak of; a team for whom random, horrific injuries were like a rolling contagion, first through the backline and then the midfield. A team that finished seventh on the ladder and whose percentage of 115.4 was the lowest of any premier in 40 years.

A percentage, indeed, only comparable in recent memory with the Swans of ’05 – perhaps, ironically, the only other premiership team – at least, since the Crows of ’97 – whose journey through September seemed so unlikely to yield a flag.

But enough of that, Kurt.

For, as I say, you’ve heard all about the drought-breaking Bulldogs triumph, and how all of Australia (except for those who cheer the red and the white) celebrated along with the Footscray faithful, because everyone loves a Cinderella premiership.

But I agree, Kurt, it’s annoying.

Let’s not forget, the reason the Bulldogs have had so little success is largely because they don’t have much money, and that’s because, by and large, everyone hates them.

Or, at best, is supremely indifferent to them.

Or at least, they were until about two years ago, when they started winning games against the odds and everyone got caught up in the rags-to-riches poetry of it all.

And that’s not really fair, is it Kurt?

I mean, why should everyone want to Doggies to win just because they’re a historically luckless club with a marginalised constituency?

After all, it’s said that when the Bulldogs played their last Grand Final, 55 years ago, public sentiment was with their challengers, Hawthorn, then yet to win a flag.

The Dogs, conversely, had claimed the cup seven years earlier and were seen as the team to beat.

The Hawks won that day, and then won 12 of the next 54 premierships (including in 2014, Kurt – you’ll probably remember that one.)

So it’s probably worth bearing in mind that while we’re all in raptures over the Doggies’ fairytale, we may be well sick of them in about ten years’ time.

And the Swans, meantime, have now played in five of the past 12 grand finals, for two narrow wins.

(Not that we can scoff from our Adelaide vantage point of two successive semi-final drubbings and almost two decades without a genuine premiership tilt, Kurt; I’ll give you that.)

But when life gives you lemons, Kurt, you need to learn how to taste the lemonade.

And watching you trudge off the MCG was an effervescent treat sweeter than any Sprite I’ve ever imbibed. 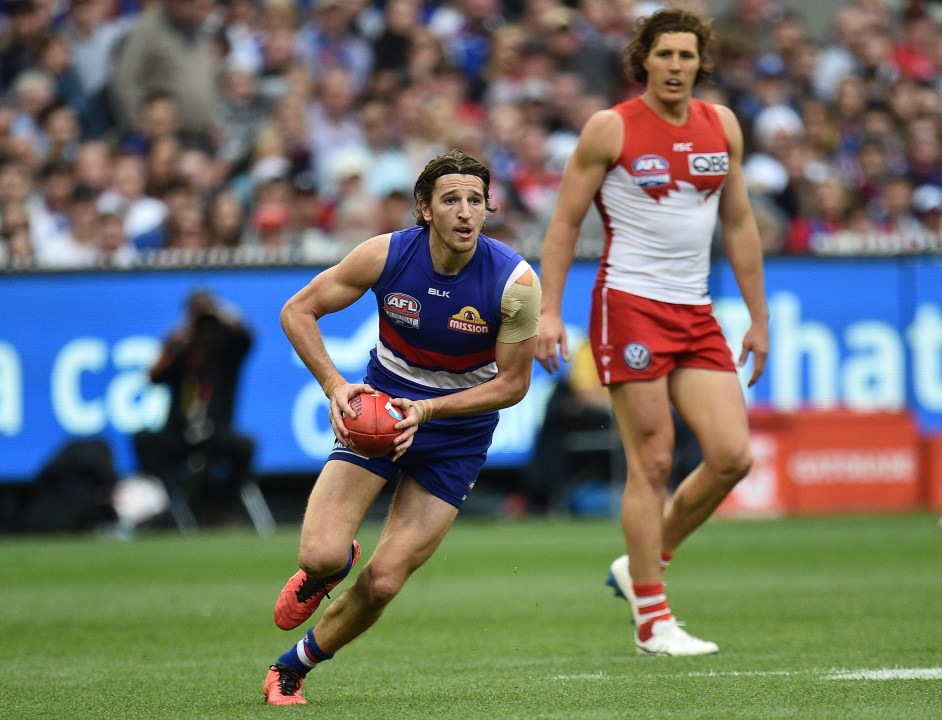 “Should I chase him? Nah…” Marcus Bontempelli leaves Kurt in his wake as the Dogs power their way to a premiership. Photo: Julian Smith / AAP

The only thing that made it better was reading Paddy D’s Herald Sun column the next day, wherein he theorized on how the Dogs had won because they’d played like themselves instead of copying anyone else, and how everyone else should now copy that.

Ah yes, you ask, but how can I hold such scorn for the likes of you and Paddy. And Gunston. And Davis… without seeing the irony of my deep and abiding love for Eddie Betts, still relatively recently arrived from Carlton (and joining his former teammate Sauce Jacobs in the process)?

But I do see the irony, Kurt. And I welcome it.

As I’m sure someone once said (and if they didn’t they should have), one man’s traitor is another man’s patriot.

And any handy player is welcome to quit a club that has invested heavily in them and come and play for the Crows, and I’ll happily sing their praises.

Is that hypocritical? Yes indeed.

For lamenting Betts is, to be frank, the lot of Carlton supporters.

Our lot is in taking an unedifying amount of schadenfreude out of your lop-sided ‘salary to Grand Final performance’ ratio. 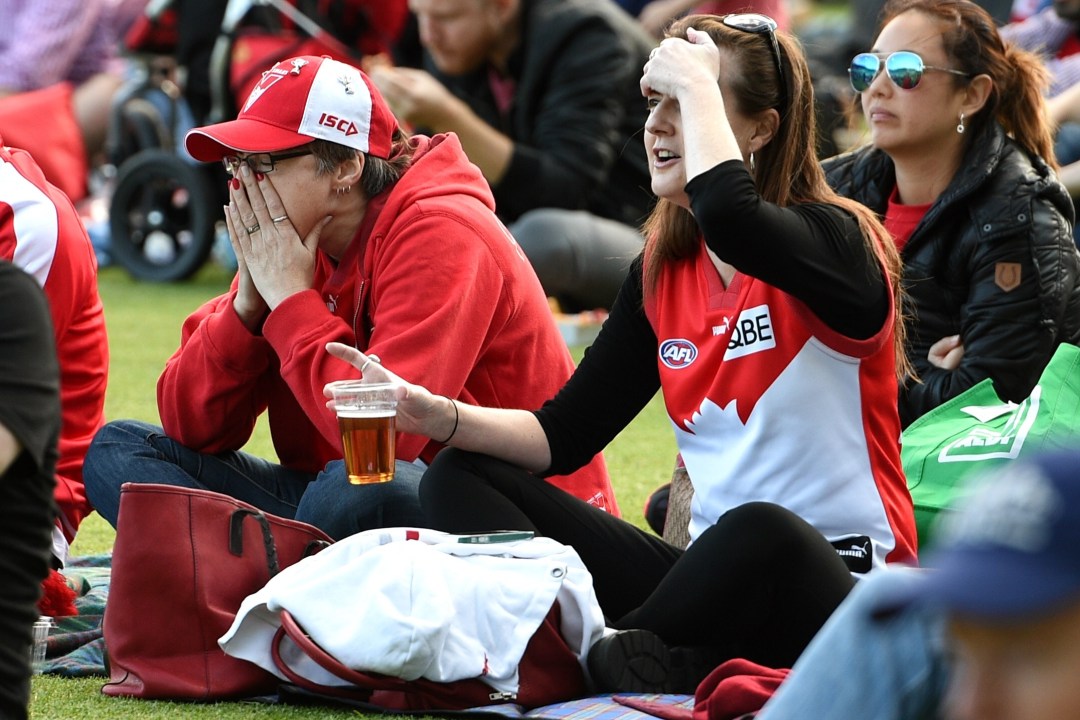 “We pay him HOW MUCH?!” Swans supporters watch in disbelief on the big screen at the SCG. Photo: Dan Himbrechts / AAP

Don’t get me wrong, I have nothing against guys getting overpaid per se.

I mean, I was genuinely pleased for Tom Boyd, with a Grand Final breakout game to rival Tom Hawkins’ in 2011. 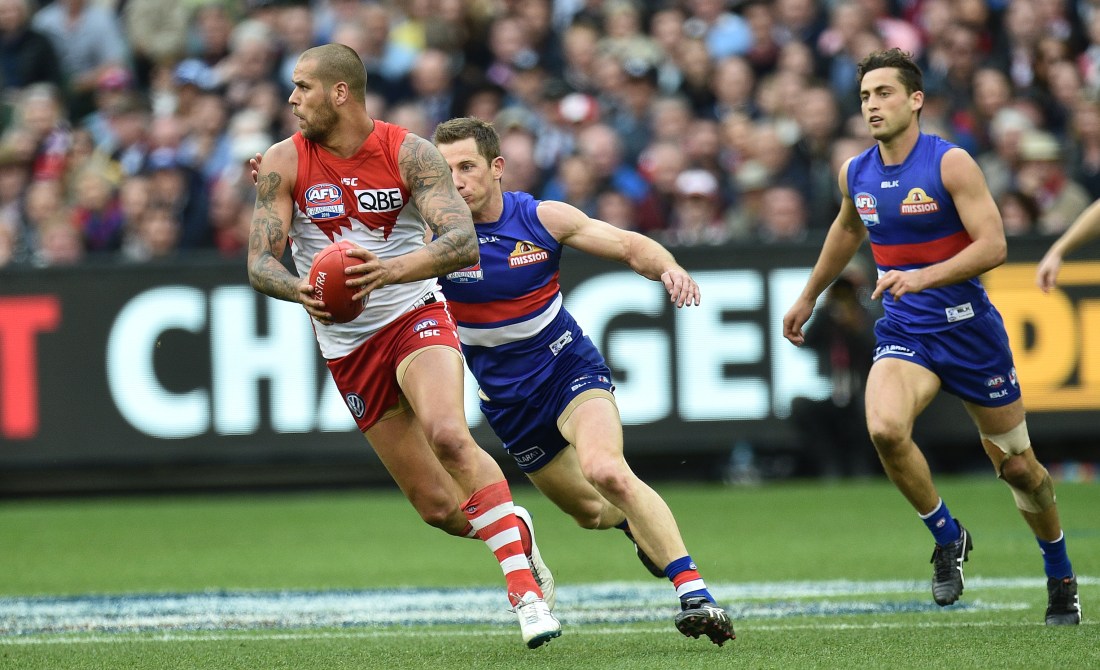 THE MOMENT: Dale Morris chases down Swans star Lance Franklin as he surges forward, laying a crunching tackle (below) that allowed big-man Tom Boyd to bomb the ball forward for the goal that all-but sealed the match. Photos: Julian Smith / AAP 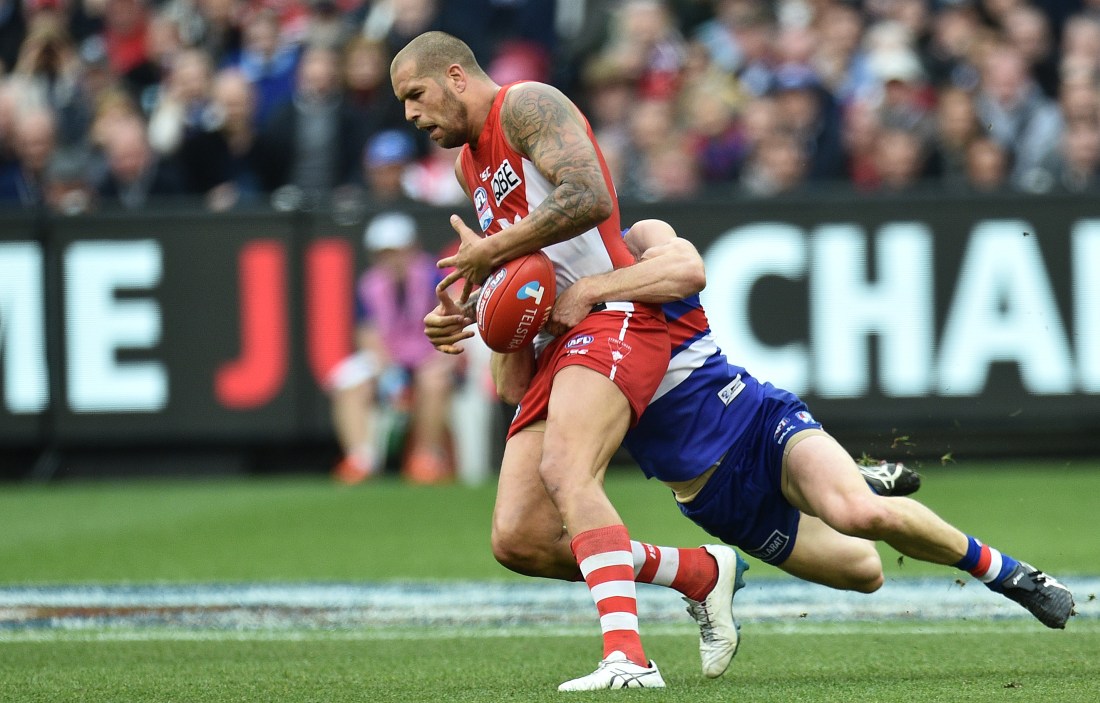 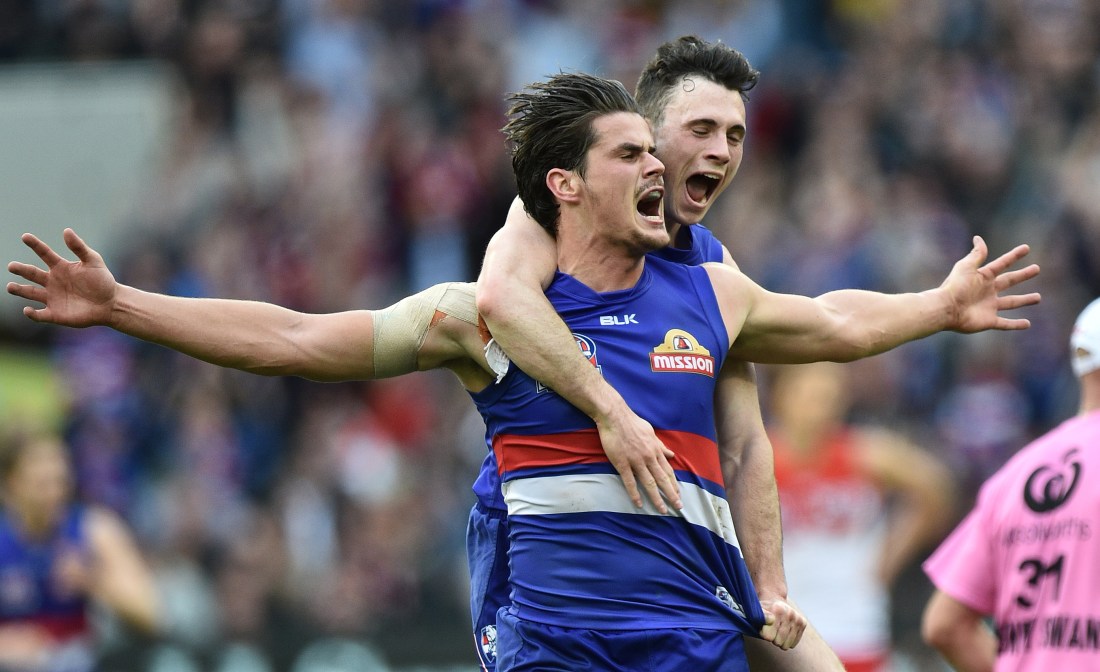 But for you, to play poorly in one grand final may be regarded as a misfortune; to do it twice… well, you know where I’m going with that, don’t you?

True enough, Gary Rohan has now turned in two Grand Final shockers as well; still, he at least preceded each with a barnstorming preliminary final performance.

But I’m starting to think the Crows may have dodged a bullet by never making the big one when you wore the tri-colours.

It’s possible grand final day is just Not Your Thing.

Last year, Wayne Carey said you should be traded. After Saturday’s performance, it was Matthew Lloyd’s turn to suggest it.

(You’ll be sorry to hear, Kurt, that we already paid overs on a ruckman/forward who goes missing in finals, so we’re not really in the market, but I’m sure you’d find someone keen to keep you in the lifestyle to which you’ve become accustomed, as they say.)

But, Kurt, as they say in France, ‘Tout comprendre, c’est tout pardonner.’ To understand all, is to forgive all.

And I just wanted to say, all is now forgiven. 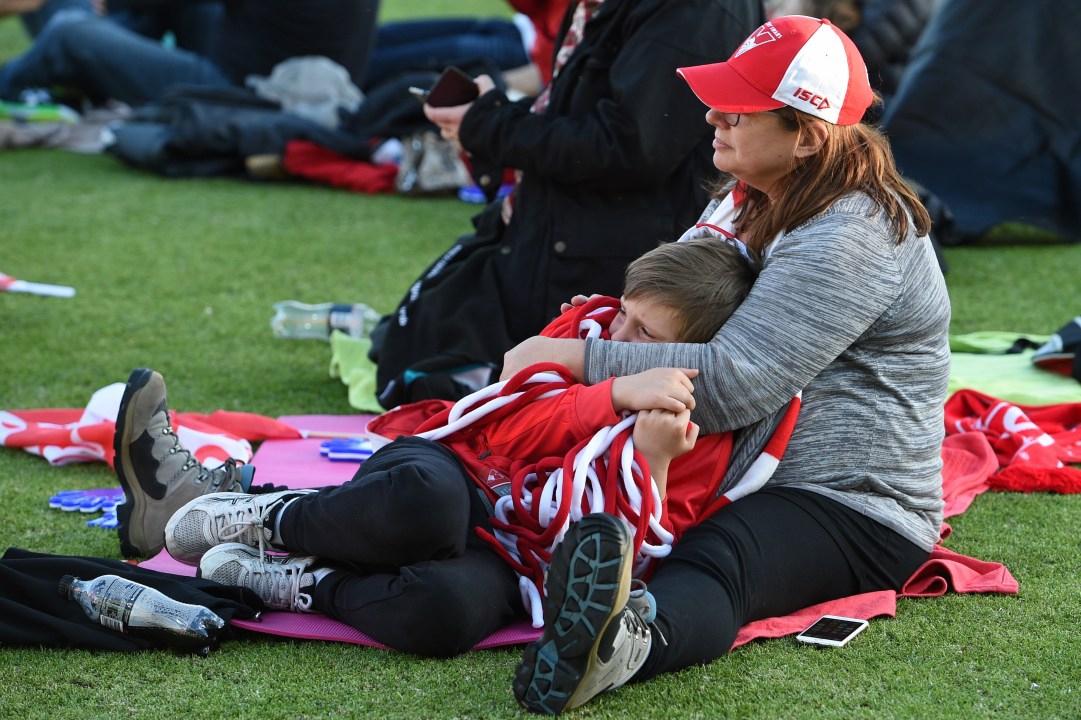 A young Swans fan breaks down as he realises Tippett has activated a two-year extension clause on his Swans contract. Photo: Dan Himbrechts / AAP

Yes, we’ve had a few differences over the past few years.

But I now realise this was all part of the journey.

Perverse as it sounds, I doubt the Bulldogs faithful would now relinquish their decades of toil and trouble, for the failure and futility only made Saturday’s victory the sweeter.

And I realise now that your two Grand Final appearances have given us infinitely more joy than you ever would have provided if you still wore the Crows’ Number Four. 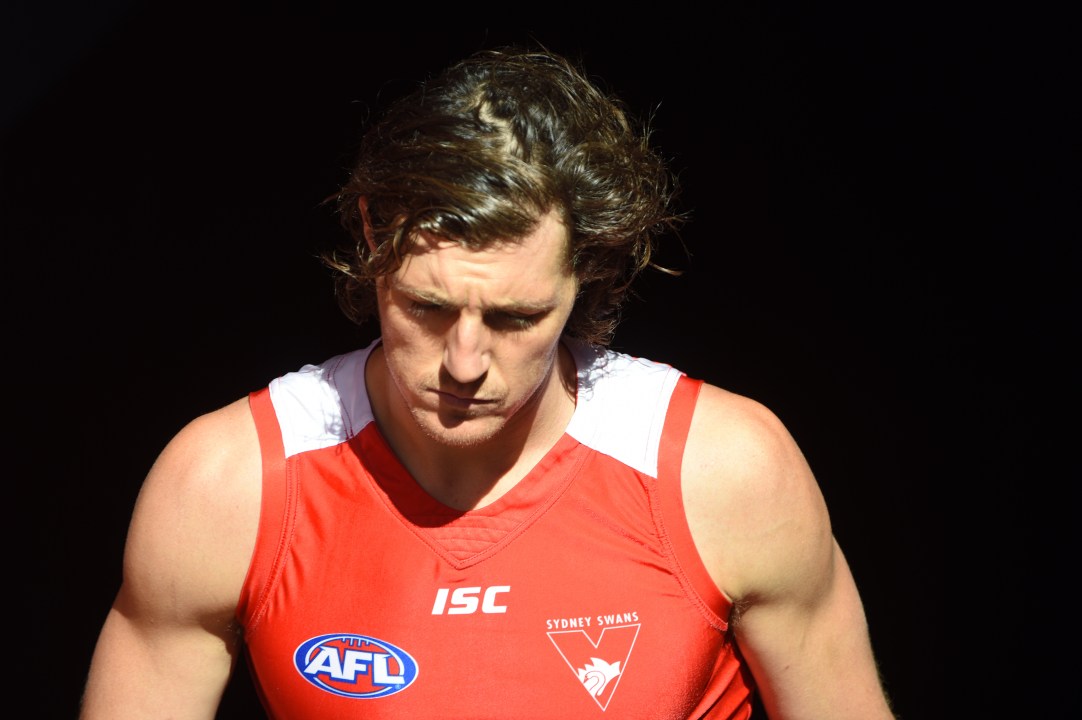 Kurt Tippett at training, dreaming of what could be. Photo: Mick Tsikas / AAP

Football needs its heroes, and on Saturday it had 22 of them, and a few more besides.

But it wouldn’t be much fun without its villains either.

So, Kurt, this is really just a little note to say thanks.

Thanks for being the guy we love to hate.

And thanks – really, truly thanks – for doing what villains are wont to do in the denouement. That is, losing to the good guys.

You’ve really gone above and beyond, old mate.

And, as Luke Beveridge would say: you deserve this more than anyone.

See ya next year, Kurt.

This was Tom’s final Touch Of The Fumbles for 2016. Yes, it’s shamelessly biased – and a bit mean – but you can even up the score in the comments section below. And if you can’t wait for next season, you can visit the Fumbles archive here.