There I was, all geared up for an afternoon of beer, barbie and some incidental football when disaster struck in the form of a herculean torrent of sick that made Linda Blair’s effort in The Exorcist look like a casual hock in a spittoon.

My one-year-old, displaying a sense of timing to rival Jack Darling going for a chest-mark in front of an open goal, had fallen victim to a gastro bug, which quickly began to spread around the household. So I reluctantly cancelled my leave pass for my mate Cakes’ Grand Final shindig and quarantined myself grumpily on the couch, from where I had in any case already watched so much of the passing season.

I sat through the pre-match entertainment marking the occasional backing tape mishap by muttering amusing asides to no-one in particular. My mood only darkened further when the main event kicked off and it quickly became apparent that not only were the bad guys going to win, a la The Empire Strikes Back, they were going to do it in the most tedious, turgid way imaginable, a la The Phantom Menace.

The only Eagle not making gaffes was, ironically, Gaff, and the Hawks were always going to run out the game strongly after having that week off against the Crows a fortnight earlier.

But, to be fair, Hawthorn are a pretty good football side, all things considered (that may be something of an understatement, but I figure they’ve won enough accolades this week not to need unsolicited plaudits from the Fumbles).

After last week’s missive suggested something less than enthusiasm for their inevitable ‘three-peat’, a Hawthorn-supporting friend sent a perturbed text asking “what’s wrong with the Hawks winning three in a row?” and pointing out that they are, after all, “a good team that plays well”.

Which is, of course, true. And caused me no small amount of consternation.

Why did I wish ill on the Hawks? And since when did I have Hawthorn-supporting friends?

The obvious rationale is that the AFL is a competition geared towards failure, or at least finite success, in a country whose collective mindset is predicated on Morrissey’s mellifluous meditation that “we hate it when our friends become successful”.

The Hawks have had their share, goes the refrain, and it’s time to share the wealth. Which is, of course, foolish.

Even more foolish, the “us against them” mentality that we must automatically barrack for a non-Victorian side when the chance presents, a theory whose logical extrapolation is that we must support Port Adelaide over 10 other clubs. Which is clearly ridiculous.

By this point my Grand Final moral compass was wavering, so I pointed out that Hawthorn smashed – nay, obliterated – my team not two weeks earlier, whereas we ran away with our best win of the year against West Coast in Round 22, and therefore I am of late more kindly disposed to the Eagles than the Hawks. And furthermore, the Hawks have bundled us out of finals in 2012 and 2007, whereas West Coast haven’t bundled us out since 2005 and 2006, so the animosity should rightly be rawer … right?

It’s fair to say this wasn’t the best year to be trying to write an affectionate piss-take of my football club; it’s kind of difficult to maintain the correct dose of aloof cynicism when questions of making finals or retaining our best player (or not, as the case may be) suddenly give way to questions of, quite literally, life and death.

It’s a tad hard to retain that despondent pessimism when you’re just so unabashedly proud of the way your team has carried itself. 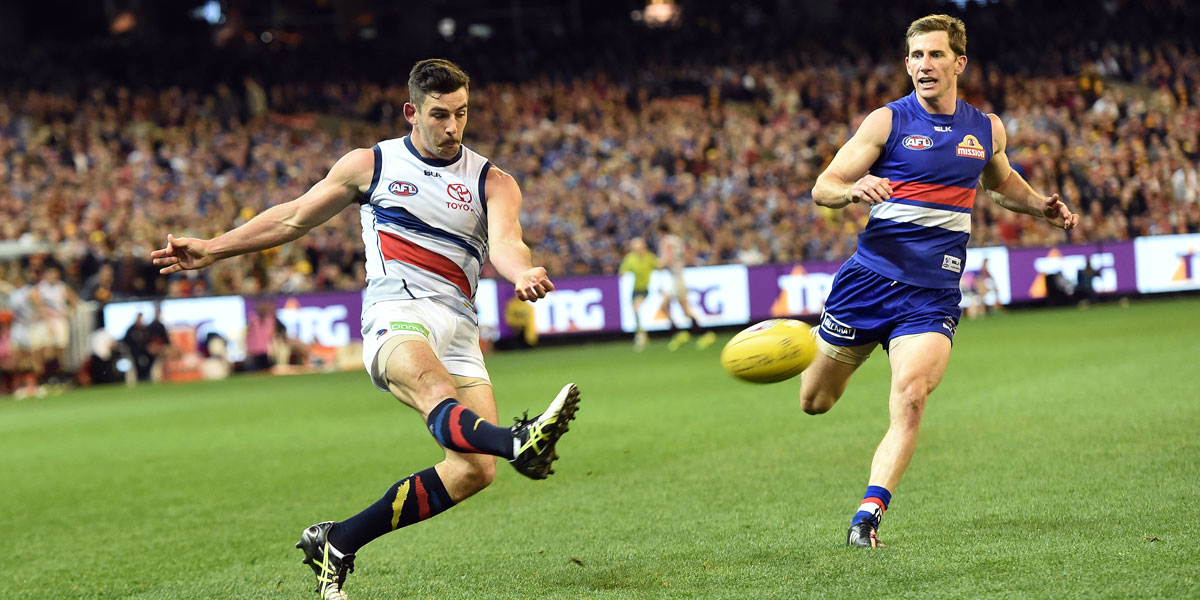 Crows captain Taylor Walker sends the ball on its way to Charlie Cameron in the dying moments of the elimination final. AAP photo

After a season that’s been anything but, it does make you wonder what was it all for? Did we really have to go through all that just to see Hawthorn waltz away with it in another of the dreariest Grand Finals ever played?

But we’ll always have those moments. That opening game against North Melbourne, when we dared imagine it might be us getting pantsed by the Hawks on Grand Final day. The second Showdown. The match against West Coast (yes, both of them). That giddying run to the finals, and that breathless win over the Bulldogs, capped by Tex’s graceful gallop down the wing.

And of course, Port losing to Carlton.

And now we gear up to do it all again.

Sometime, perhaps today, we’ll appoint a new coach, as soon as the Crows can find someone who considers living in Adelaide more palatable than coaching a side facing a collective two-year drug ban.

And even then, the signs are good. Our two most prolific Brownlow vote-getters were Paddy Dangerfield and Scott Thompson, both of whom will be playing at the club for years to come (NOTE TO SELF: double-check this.)

We were recently so desperate to secure an early second round draft pick that we happily offloaded a guy who just won a club best and fairest (albeit with Melbourne), and yet we now apparently consider pick 14 neither here nor there, and would happily eschew it altogether on “principle”.

But these are all problems for another day, and another year.

Having not succumbed to the gastro bug by halfway through the third quarter of the Grand Final, my mood lifted. Hawthorn were running away with the game, while I was stuck on the couch, but it mattered not. If this season hasn’t taught us to be somewhat philosophical about such minor misfortunes, nothing will. But moreover, I realised that my predicament was, in its own little way, the most fitting finale to a season in which we made big plans and dreamed big dreams, and saw them cruelled by the most unpredictably brutal twist of fate.

One day though – soon, I hope! – when fate finally aligns our way, I’d like to think of Walshy having his Man Conversations with the Man upstairs, and gazing down on his team like he once gazed on those sunflowers in Amsterdam.

Touch of the Fumbles is InDaily’s weekly AFL column. Barring something extraordinary, this will be the last ‘Fumbles’ for the year.