Thirteen years ago the late Matt Price, noted journo and Freo supporter, wrote him an open letter to thank him for eschewing truckloads of cash and the allure of family in Adelaide to stick it out with the Dockers, a move which has probably cost him a million dollars and a premiership over the ensuing time.

“But you’ve done us a great service by following your heart and not your wallet or family,” Price wrote.

“There’s an eleven-year-old boy in Canberra whose face lit up when he learned ‘Pav’ was staying put. Multiply that by tens of thousands.”

Unfortunately Paddy Dangerfield won’t be getting an equivalent letter from the Fumbles. Not that he would have anyway, since my eldest kid is only four and has no idea who he is, let alone cares where he lives or who he plays for.

But needless to say, his old man doesn’t share this blissful ignorance.

Not that we all didn’t indulge in some collective ignorant bliss this year, holding on to that vain hope that Paddy was somehow just stringing us all along because he’s a bit of a joker, or has a poignant sense of timing or enjoys suspense.

But by mid-week, a day that will henceforth be known in our footballing lexicon as Black Wednesday, it was official. It was over.

You could almost hear the collective groan (all except the bloke who designed the Crows’ 2016 calendar, who no doubt allowed himself a silent celebratory fist-pump).

And the problem, among many problems, is that this ain’t some one-month dalliance we can simply brush aside. This is the sporting equivalent of a kick-in-the-guts, it’s-not-you-it’s-me (but it’s actually you), knock down, drag out divorce, complete with custody battles and fights over the furniture.

If you genuinely wish Paddy well in his new endeavours you are probably the type of person that thinks we should barrack for Port when they make the finals and we don’t, and not at all the type of person I ever wish to encounter again.

Hopefully we don’t do anything stupid like drunk-dial Paddy after a few too many and beg him to come back, or accidentally call out his name in years to come when some other player bursts out of the pack to kick a goal on the run from the 50 metre arc.

For, as with those hideous bust-ups where you have to see your ex immediately sidling up alongside their new squeeze (a more successful, better adjusted version of yourself), we have found ourselves unable to just move on and forget he was ever in our lives.

But then, inevitably, came the Blight Medal. The club champion. And there he was. A turncoat in a golden jacket.

At the very least, one might hope it bolstered his trade value.

He was eloquent and impassioned enough, although a simple moon to the crowd would have conveyed the tone of the week more effectively. I’d have preferred him to just go up onstage and say: “I’ve got to go now, my planet needs me”, before simply vanishing into thin air. That would have been cool.

But if we were being consistent, we’d have just disqualified him from eligibility on the grounds that he didn’t represent the club’s standards, as we did with Gunston. Or relegated him, to forever sit as a perpetual runner-up, like Essendon sitting ninth in 2013, with an asterisk denoting the fact that he got there on points but didn’t really deserve it.

A Brownlow tonight would complete the trifecta, the Festival of “Eff You, Adelaide” that Paddy has embarked upon with such gusto this week.

Winning the club champ was awkward, but not as awkward as Paddy discovering a guy at the airport wearing the same shirt as him.

Of course, there are those that say we should be mature about this.

That he is a well-meaning, articulate lad who played his heart out for his club and now wants to go home to play for the Moggs Creek Moggies and start a family, and that we should bid him thanks and farewell with good grace.

To which my considered response is: nah, screw that.

There can be no flying as one when one has flown the coop.

If you genuinely wish Paddy well in his new endeavours you are probably the type of person that thinks we should barrack for Port when they make the finals and we don’t, and not at all the type of person I ever wish to encounter again.

And it’s not about the fact he’s walking out just as he’s hitting his career peak, abandoning the club who plied him with faith and cash to the insulting consolations of free agency. Or the fact that he’s off to help prop up an ageing Victorian heavyweight just as we appeared, finally, to be prising our premiership window back open.

Actually, it is about those things a bit. Quite a lot, in fact.

But it’s mainly about the fact that we like to think, huddled on the terraces as we watch our side gift visiting teams three-goal headstarts and throw away match winning leads, that there is something noble about the struggle.

That the pursuit of sporting greatness is somehow removed from the petty realities of real-life, in which individuals make decisions to benefit themselves and their families, rather than the institutions that employ them. 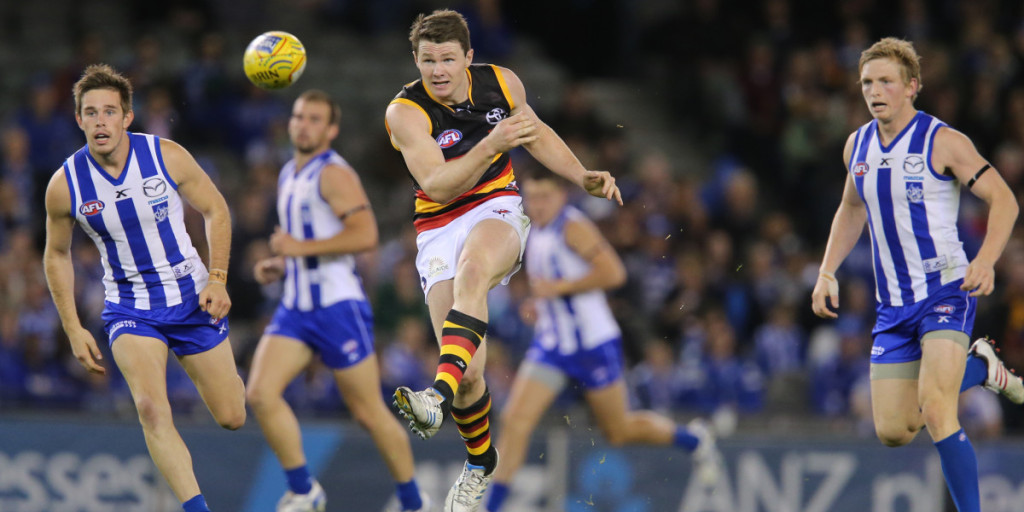 Patrick Dangerfield no doubt turning the ball over.

When Simon Black won the Norm Smith for the Lions in 2003, he said: “This bunch of guys I play with, I’d absolutely die for.”

Dangerfield obviously couldn’t say that as he donned that hideous yellow jacket on Saturday night.

He can’t even bring himself to live in the same city as his (former) teammates, let alone die for them.

But here’s the thing. Most of those teammates Black was referring to were eventually traded, or walked out, or were ‘moved on’ by the club to free up space in the salary cap, or were told their time was up even though they wanted to fight another year.

The Lions have only made the finals once, in 2009, since that glorious era under Leigh Matthews, and in that series Daniel Bradshaw kicked five goals for his club as they came back to beat the Blues by seven points.

A few weeks later, he walked out after his former teammate Michael Voss conspired to put him up as tradebait for Carlton lunkhead Brendon Fevola.

Despite all the stirring speeches, and supporters’ fervent hopes, loyalty and self-interest are indistinguishable in football, just as they are in any profession.

You’d be hard-pressed to find a professional footballer who wouldn’t jump at the chance to play for more money or better conditions, or go somewhere they liked better or where they might have more success, if the chance presented. Just like anyone else. Except Pav.

And Dangerfield, like Tippett before him, has pricked the bubble of our collective self-indulgence that so fervently wants to believe otherwise.

And for that, he can take his ugly yellow jacket and prospective Brownlow, and sod right off.

After all (looking on the bright side), given his propensity to turn the ball over and his knack for winning heaps of possessions, his continued presence basically equated to the opposition having one extra player anyway. Right? 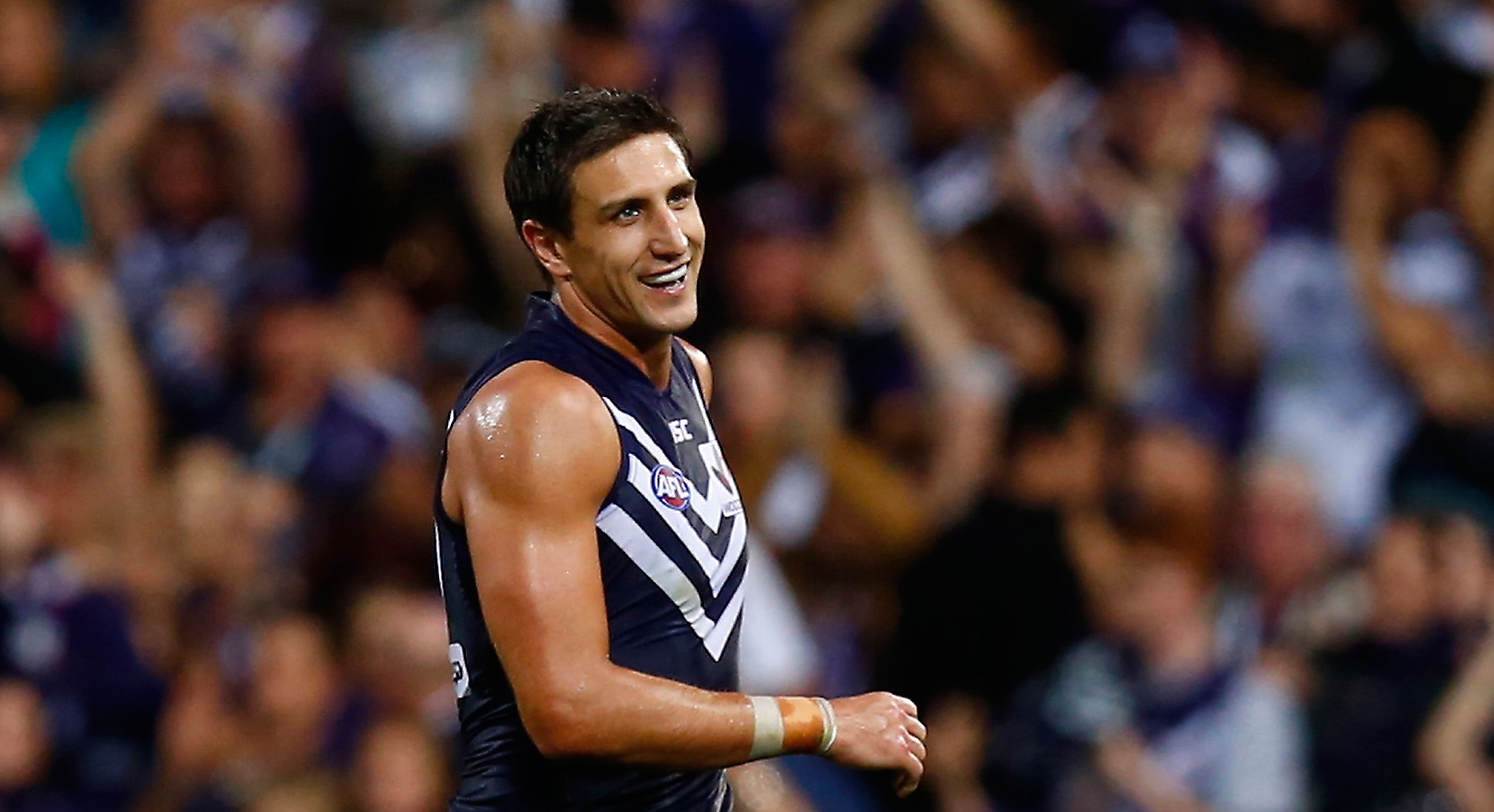 As for Geelong, snaring Dangerfield guarantees they will play finals next year, just as Adelaide have done for each of the past eight seasons (if I recall correctly).

The Dangerfield debacle caps off a fairly tortuous week as the Crows began off-season in their usual chaotic fashion, with the Talia brothers at the centre of allegations they traded match-day gossip over the phone (although I have it on good authority Daniel didn’t hear a word Michael said anyway, as he was distracted by his cat noisily vomiting in the background).

Then John Worsfold gave a glowing endorsement of the club’s future direction by announcing he’d rather coach a team that may not have any players available for the foreseeable future.

And CEO Andrew Fagan, having deftly handled all of the above, was dragged into a controversy involving a land deal he’d brokered while overseeing the ACT Brumbies. Which came as a shock for most South Australians, who thought the Brumbies were a successful baked-goods franchise.

At any rate, it reminded us yet again that few clubs can do off-season crises like the Adelaide Football Club.

Between all that and the new documentary, it was quite the weekly bonanza for Port supporters. (If you haven’t seen the doco yet, here’s a SPOILER ALERT: they don’t make the finals.)

As Matt Price wrote in his letter to Pav, “loyalty, character and commitment are rare and worth trumpeting”. Too rare, as it turns out. But at least we still have schadenfreude. Despite all their recent success, I’d always found Geelong pretty sympathetic. It will be nice to have another team on which to wish all the ill in the world.

NB: There were apparently also two finals played this weekend, whose results were as unpredictably shocking as Dangerfield’s defection. Although the AFL did enhance its multicultural aspirations by allowing them to be officiated by people who had evidently never seen the game before.

It is now safe to say, in the words of Kevin Rudd, that the greatest moral challenge of our time is stopping Hawthorn from winning three consecutive premierships on Saturday. Godspeed, Eagles.