My mate Simon obligingly picked me up from Melbourne airport three hours before the first bounce, and we retreated to his home to await our fate, drinking beers and talking of all things other than the impending final against Hawthorn.

We didn’t know it then, clouded with nervous excitement and – yes – hope, but we were already doomed, condemned men waiting on the vicious whim of a sentencing judge.

At one point, I returned to the kitchen to refresh my drink; Simon’s almost-seven-year-old son Ben was in the adjoining room, playing his computer game on a large-screen TV. Ben is sometimes a Gary Ablett obsessive, sometimes a Minecraft devotee. Today it was Minecraft.

“Are you winning?” I asked in the hapless way one does when trying to permeate the intergenerational permafrost.

Confused, I conveyed this peculiar concept to Simon, who looked at me as if I were a simpleton.

“No, there’s no winning and losing,” he agreed.

Maybe the Crows had taken the Minecraft mentality to heart ahead of their clash with Hawthorn, for from the outset they played as if winning or losing was neither here nor there. Sadly though, football is not Minecraft. There are winners. There are losers.

And we lost. Big-time.

The Hawks scored early, which was fine, accustomed as we are to conceding our famous three-goal headstart. Jenkins got one back from a crazy angle, a good sign given he was all thumbs last week, and then Paddy got another from an even crazier one, and wildly gestured to the reputedly 30,000-strong Crows contingent to fire up. But if the crowd was full of life, not so the team it had come to support. Adelaide was flat, listless. At each break, the players returned with seemingly less resolve, conceding early goals that pushed the hope of a turnaround further into the realms of fantasy. 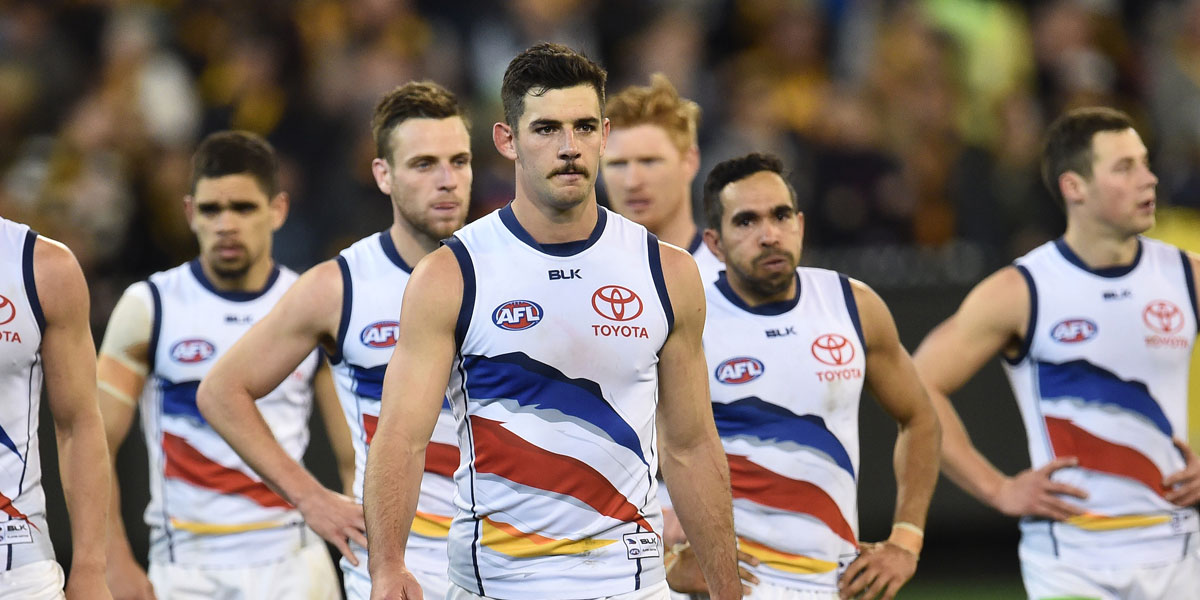 The beaten Crows leave the field after the match. AAP image

Eddie Everywhere was nowhere, or at least nowhere near the ball. He was without a touch at the quarter, during which time Hawthorn had already built a six-goal lead.

He was nowhere, but he wasn’t alone. This side was spent.

After that loss to Geelong, whenever I contemplated the logistics of an unlikely Premiership, I thought of Bruce McAvaney’s famous commentary on the siren of the 1998 Grand Final: “They’ve been to Perth, to Melbourne, to Sydney, to Melbourne … and they’ve come back!”

But not this time. It was our third week on the road, and there would be no coming back.

Brodie Smith was hesitant, stilted; a muffed opening-minute kick-in gifted the ball to Luke Hodge for Hawthorn’s first goal, which seemed to both bolster the skipper’s confidence and collectively dent the Crows’.

Jarryd Lyons was back in his usual shade of green, having been dropped last week after a conversation I imagine began with Scott Camporeale saying: “Jarryd, I’ve got good news and bad news; the good news is I can guarantee you won’t be wearing the subs’ vest this week…”

He came on for Mackay, who last season inexplicably signed a 60-year contract extension but who now must be considered very much on the cusp.

Last week’s heroes, Big Tex and Little Charlie, seemed in no danger of gaining a possession. And speaking of Danger and possessions, Paddy’s no doubt packing up all his as I write, preparing himself for that awkward chat with Steven Motlop about who gets to wear the Number 32 guernsey.

He was our best – again – on Friday, Danger. Surely he’ll take out his first club champion award on Saturday. And then we’ll have to work out how to carry on without him.

Because if this year has taught us anything, it’s that fairytales are complete and utter bollocks.

That, and that Dangerfield hails from Moggs Creek. I reckon we’ve heard that one loud and clear.

But at least we’re not sitting here this week wondering what could have been, as the Bulldogs were last week and will be for years to come.

Because we didn’t kick ourselves out of it on Friday night.

We didn’t fumble ourselves out of it.

We were never in it. 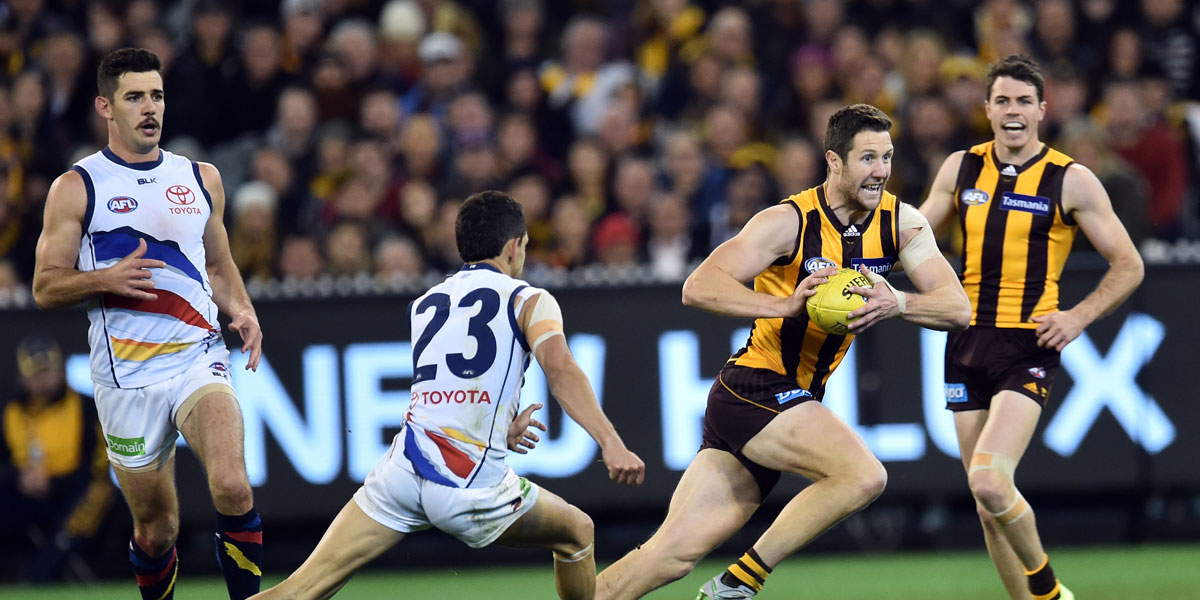 Taylor Walker (left) and Charlie Cameron (no. 23) didn’t get near it against Hawthorn. AAP image

At least we can be happy for the long-suffering Hawks supporters, who had just endured a horror one-match losing streak, which is about as bad as it gets for Hawthorn.

By midway through the third I was getting text messages from Port fans who had conveniently forgotten the fact their side failed even to qualify for the major round.

It made me feel perversely better though; it felt normal. I don’t think I could have remained friends with them if they had offered sympathy.

I hadn’t visited the MCG, I realised, since the 2002 preliminary final, during which I picked a stoush with a lippy Collingwood supporter, and finished up with him shaking my hand warmly on the siren because “I stayed till the end”.

The MCG has changed a fair bit since then. Seven clubs have won premierships there. But not us.

And again, I stayed to the end, despite a flock of fans flying as one to the exits at three quarter time.

But you had to stick it out, right? After the year we’ve had?

On Saturday night, the Roos beat Sydney. Kurt Tippett was in career best form, but his side still lost.

And with it, North secured a top four finish, a prospect that seemed faintly silly when we annihilated them back in Round One, as Phil Walsh’s tenure began with such promise.

How long ago that seems. How much has changed.

But we have glimpsed it, that masterpiece Walsh spoke of. We saw it taking shape against Essendon, Brisbane, West Coast, the Bulldogs.

Not to rationalise away a horrid defeat for a team that looked as if it had nothing left to give, but 2015 was a bit like my mate’s kid’s game of Minecraft: “There’s no winning and losing … you just create worlds.”

It was about loss, more than winning and losing.

And we have seen a side create, if not a world, then at least a new prism through which to view it.

Regardless of how it ended, they made us proud this year.

They can breathe now; they have that at least. And that, at least, they can appreciate this year more than most.