Hey Port, tell ya what. We’ll trade you your 2000 extra members for a spot in the finals? No?

In truth, I was slightly relieved that the Crows had fallen behind the Power on the “official” membership table, as my general predilection for backing hapless underdogs has always felt a bit indefensible when it came to supporting one of the biggest, brassiest clubs in the league. Ironically, I reckon being the second-biggest football team in town now makes us more sympathetic.

But the fact we kicked eight goals to none in yesterday’s opening term against the bandwagoner’s premiership favourite was pretty good too.

I took my almost-four-year-old along to the Oval for his first AFL game yesterday. He lasted until about halfway through the first quarter before deciding it was time to go home, thus still managing to outlast West Coast.

After the game, a mate of mine was helping to stimulate the Small Bar economy when he spied a well-to-do Eagles supporter buying four cigars “to hang on to for the Grand Final”. Confident bunch out west, aren’t they? Surely safer to invest in a nice Bordeaux?

I don’t want to jinx anything here, but it might be time to consider the outside possibility that … (whisper it) … we’re actually pretty good.

Once upon a time our leading goalscorer was Graham Johncock, who kicked 30 in a year we played finals. This year, we have six guys who have kicked 20 or more. The J-Pod has kicked 20 in two games in the SANFL and is still next to no chance of getting a senior call-up. Tough crowd!

Guernseys were discarded, exposing more flesh than a game of women’s football as envisaged by Graham Cornes, while punches flew amid violence not seen since Alastair Clarkson visited Adelaide Oval.

Tex Walker, for all the flak he’s copped (mostly from me) over his inaccuracy, is tied with Betts on 54, and that’s without that cancelled game against Geelong.

It seems fitting, then, that we finish the home and away season at the Cattery, albeit not for the sudden death finals qualifier that we long envisaged. Not that I’m complaining, but it was a little surreal having steeled ourselves for these last two games, to make the finals before either of them by dint of a match in which we played no part whatsoever.

Not to mention having to genuinely celebrate a solid Collingwood victory.

But the spirit of 1997 still shone through Friday night’s game in the form of Geelong defender Andrew Mackie, whose apparent determination to ensure a Magpies win suggested that deep down, he’s still that 13-year-old kid cheering for the Crows. 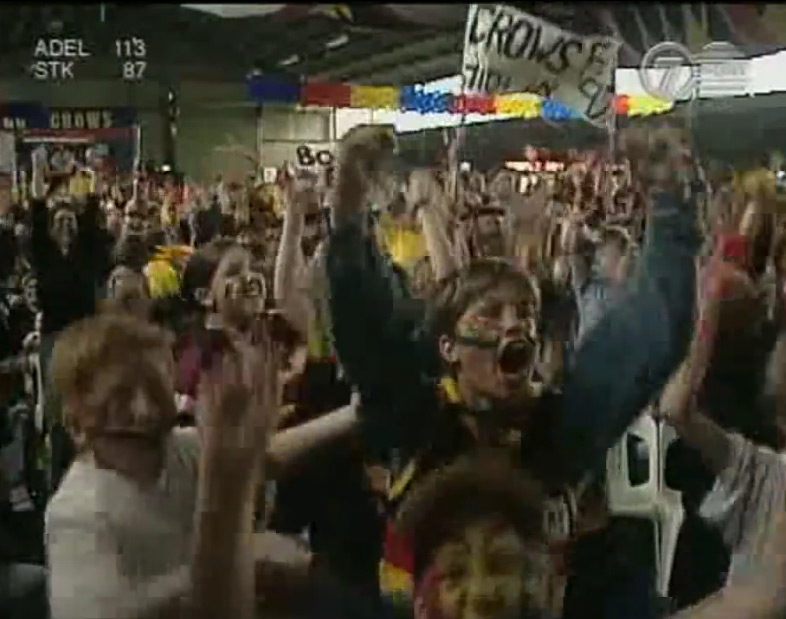 A kid who looks a lot like a young Andrew Mackie cheers on the Crows in the ’97 Grand Final.

I suppose Collingwood owed us for that semi-final in 2009, which ended one of only two finals campaigns we’ve played in the past six years.

Though it would have been helpful if Essendon could have got their shit together against Richmond; you’d think it’d be the least they could do for us after we helped them get rid of James Hird.

We now require North to beat the Tigers (or Brisbane to pip the Bulldogs, which seems monumentally unlikely) to pave the way for a home final. Of course, we still need to trump the Cats at home, in a game that could now be an emotion-charged farewell for a swag of premiership stars (theirs, not ours; we don’t have any). For Paddy Dangerfield, that would be a bit like going to an open inspection only to find the current occupants still packing their bags. But then, maybe Paddy is more of a home renovator; he certainly seems to enjoy re-building. Why else would he contemplate leaving the Crows just as the toils of a long five years start to bear fruit, to join a club on the verge of putting a quarter of its starting squad out to pasture?

Maybe Doc Clarke should sit him down and tell him about that time he joined Adelaide just after their two straight flags, from Brisbane just before their three? Or as I call it, a “Reverse Martin Pike”.

Let’s be serious for a moment, though, to ponder that the fact this Adelaide team is already ensconced in the finals (and now, broadly considered an outside premiership threat) is actually kind of amazing, given the year we’ve had.

When the players walked in tears into that circle of grief in the middle of Domain Stadium a week after Phil Walsh’s death, they had fallen to West Coast by 56 points. The winning margin yesterday, a mere seven weeks on, was 57.

Of course, Sod’s Law dictates that even despite the herculean effort to rebuild confidence and enthusiasm around the Adelaide brand, someone will always bob up to tarnish it. Last week, it was Graham Cornes and his weird boob preoccupation (he kept digging this week, incidentally, lamenting with no apparent irony that there was “very little rational debate” in the many critiques of his opening gambit). This week, though, he was trumped by good ol’ Matty Jaensch, whom the club revealed was caught drink-driving on Friday night.

I imagine he’ll give consideration to the “Vomiting Cat” Defence, with its proven track record of success in traffic-related offences.

Jaensch is, of course, on layoff with a knee injury, and his nocturnal peregrinations predictably prompted some outcry.

What do people expect, though? Players NOT to drink-drive just as their team qualifies for its first finals series in three years?

Fortunately, in the context of the weekend, the wayward defender’s actions were about as relevant as Port’s game against Gold Coast. The enthralling battle for ninth place, in the northern drizzle, was such a dour, dreary affair the players had to resort to an all-in mêlée just to break the tedium. Guernseys were discarded, exposing more flesh than a game of women’s football as envisaged by Graham Cornes, while punches flew amid violence not seen since Alastair Clarkson visited Adelaide Oval. 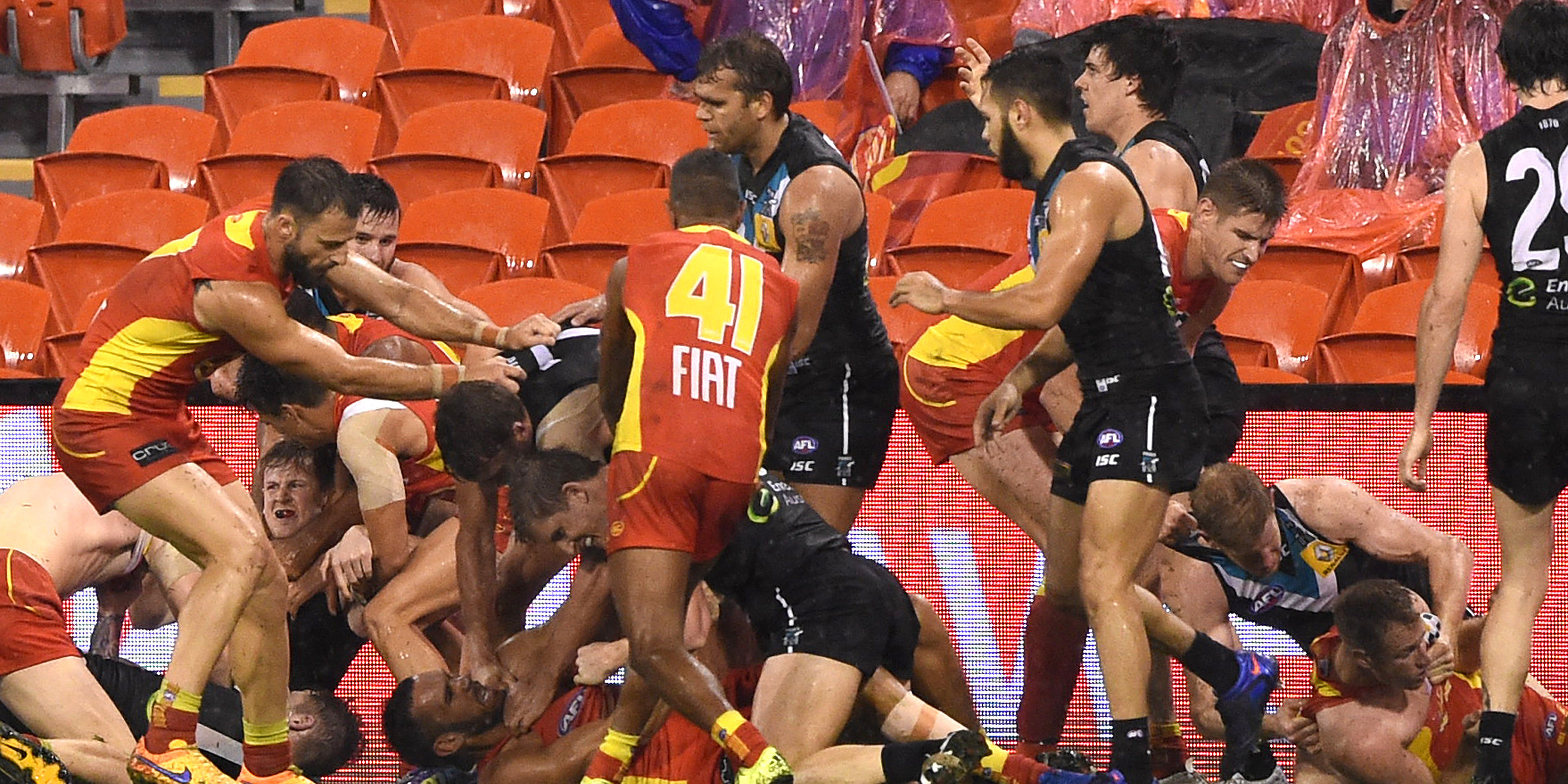 All capped off by Ken Hinkley’s bombshell revelation that if Port had played the type of football that beat the Suns more often, they might have won more games this year. The fact they didn’t play Gold Coast every week was also a contributing factor to their season’s lack of success.

Ironically, Port probably played their year’s best football against Freo in Round One … and lost. Their season comes full circle when they host the minor premiers on Saturday. Given Ross Lyon’s penchant for mass restings, we can expect a nasty outbreak of General Soreness in the Dockers camp, giving the Power yet another chance to prove their worth and ponder what might have been.

The Crows, though, are off to Kardinia Park to finally face the Moggs Creek Seniors, who can console themselves that their season was sacrificed serving a cause far greater than their own.

Touch of the Fumbles is InDaily’s Monday AFL column. For new readers, yes, it’s shamelessly biased – if you feel the need, even up the score in the comments below.