It was a big week in football, what with James Hird falling on his proverbial sword at Essendon. If it’s any comfort to the AFL’s former golden boy though, his demise could not have been helped. It was fate. And he now finds himself in illustrious company.

For Hirdy has become the fifth AFL coach to have euphemistically “parted ways” with his club after a hefty defeat at the hands of the Adelaide Crows.

Count ‘em: five. This is now officially a ‘thing’.

So, now that we’ve established this as a bona fide football phenomenon, it behoves us to give it a name. One interlocutor suggested “Curse of the Crow”, but that seems a little close to the fabled Crows Curse that we all know doesn’t really exist. I’d argue instead for “Adelaide Shellacking Syndrome”, although that involves a somewhat unfortunate acronym.

Happily, the Crows did their best on the weekend to unseat Justin Leppitsch as well, but I suspect he’ll coach on, since Brisbane (unlike Carlton) have the self-awareness to recognise a poor list when they see one.

Still, the 87-point margin against the Lions was all the more impressive given the Crows players’ Enterprise Bargaining Agreement stipulation that they don’t have to turn up to play until the second quarter. 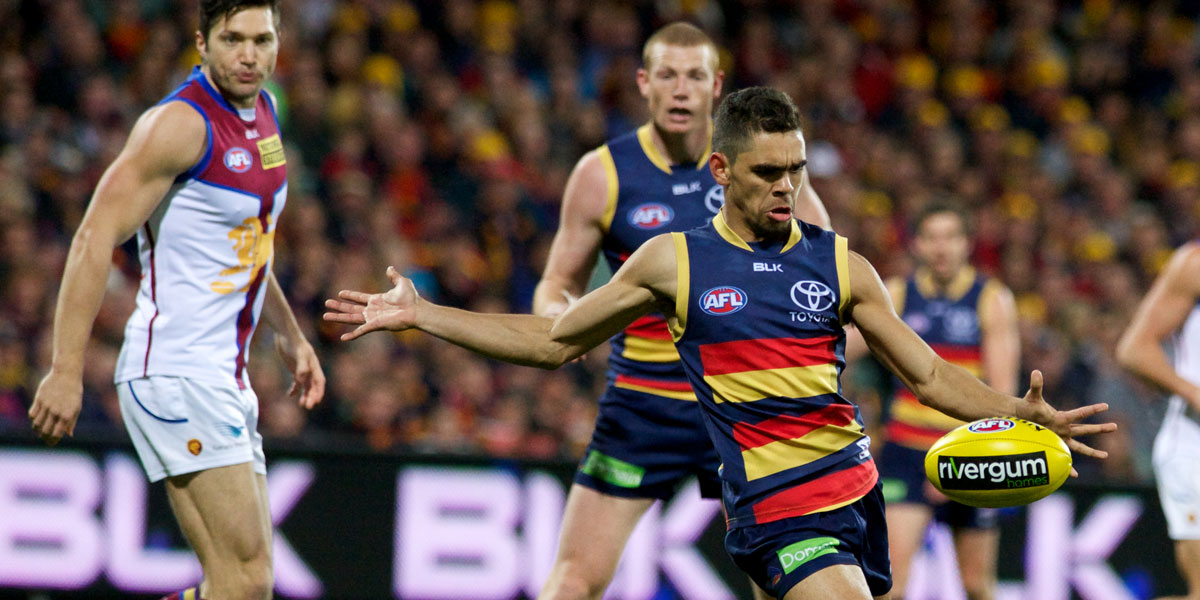 Charlie Cameron has a snap at goal. Photo: Michael Errey/InDaily

In years to come, future AFL teams will study and emulate Adelaide’s patented “lull the opposition into a (hopefully) false sense of security” technique, one of the most effective tactical manoeuvres in the modern game. Apart from all the times it didn’t work.

Nonetheless, I’d probably caution against using it against West Coast on Sunday, given what they managed to do to the formerly high-flying Bulldogs in a single quarter yesterday. If we thought the Eagles were vulnerable given their injuries and recent trouble at the tribunal, with key midfielder Chris Masten suspended for biting, we thought wrongly. Parenthetically, it was amusing to see Masten’s sympathisers rail on social media against Freo’s Nick Suban for dobbing him in, which they declared a “dog act” with no apparent irony.

Still, “Masticating” Masten was given two weeks on the sidelines to chew things over, which could come back to bite him if we manage to roll his team on the weekend. (Alright, I’ll stop now.)

It was Dangerfield’s 150th-game milestone against Brisbane, so appropriately we all spent it obsessing about Geelong. The Cats’ concurrent match against St Kilda was proving to be the night’s more tantalising fixture, as a looming Saints victory promised to leave us unassailable in the top eight. Unfortunately, St Kilda evidently learnt their goalkicking technique by studying a recording of Adelaide playing Richmond a fortnight ago, and they kicked 14.13 to the Cats’ 15.7 to tie the game instead.

When the score went up on the big screen at Adelaide Oval in the middle of the final term, I cheered stupidly for a few minutes, before I actually did the maths and realised I was cheering … well, stupidly. The draw doesn’t change the finals equation one iota, other than in the unlikely event that we also manage to tie with West Coast. Our healthy percentage may be a comfort, but it’s as useful to our qualifying prospects as having a cold carton of Heineken and no bottle opener.

At the very least, Geelong play Collingwood to kick off proceedings this weekend, so we’ll know well in advance of our Sunday game what our equation is; but the most likely is that we must win one more game.

Even the slim hope that North Melbourne would drop their final three matches to allow us a wildcard entry was swiftly erased with the Roos’ comeback victory over Freo. But I’ll forgive them that, as it also finally put paid to that slim mathematical possibility of Port forcing their way into the eight. 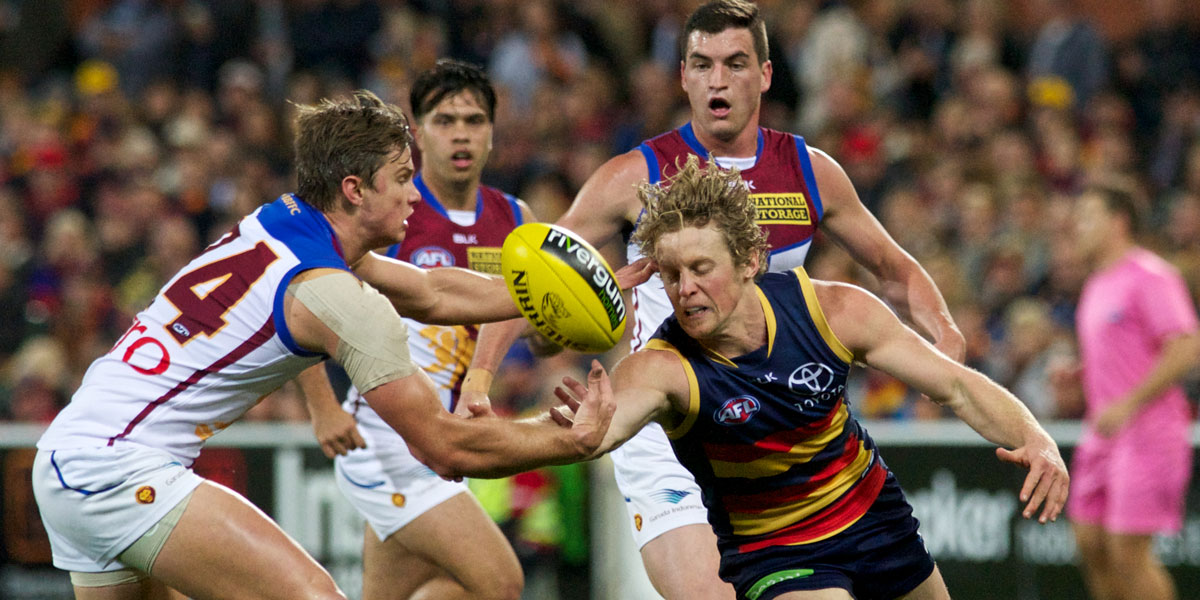 The Power proved on Friday night against Hawthorn that they can match it against the best in the competition as long as there’s nothing else to play for. The Hawks appeared to have bought into the hype that they don’t need to bother turning up again this year, other than to collect the cup on grand final day. Their supporters clearly have, with only 28,657 deigning to show up under Friday night lights to see their side supposedly cruise down the final straight towards a third consecutive flag. Seriously, they get the result they deserve with that attendance. But if their fans were thin on the ground, the Hawks were consoled by some vocal cheerleaders in the commentary box, whose considered match analysis convinced me that Hodge actually came nowhere near Chad Wingard at any point and that Cyril Rioli had the greatest 10-possession game in AFL history.

I was flicking back and forth from the evening’s other dead rubber, the fifth Ashes test, so I initially missed the most egregious bit of barracking, when the umpires at length adjudged a Hawthorn goal despite the ball deflecting off Cyril’s arm. Which at least ensured Adam Voges wasn’t responsible for the night’s worst review decision. 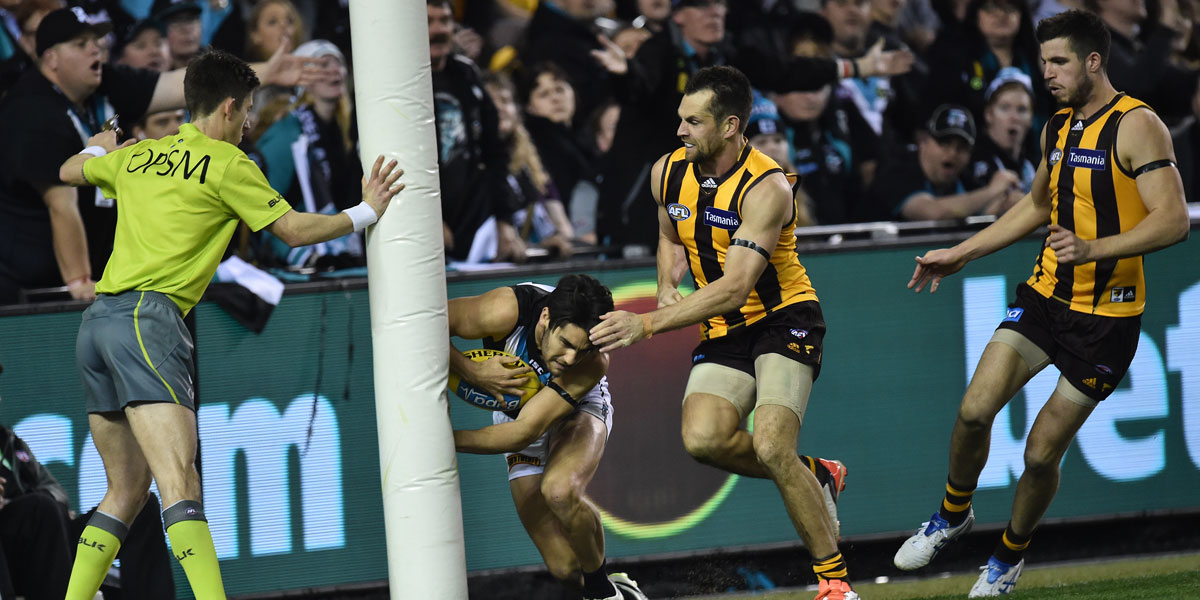 But the Power nonetheless held on for a relatively comfortable victory that the commentary team nonetheless assured me was a nailbiter.

It was a great result, which saw Port slip from seventh to ninth in the national draft pecking order and relegated Hawthorn to third place on the ladder, ensuring there will be no downside whatsoever when we beat the Eagles next week.

Unusually confident, you say? Well, there’s one more incontrovertible truth about Adelaide Shellacking Syndrome: in every year that we’ve managed to get an opposition coach sacked, we’ve also made the finals. Thanks Hirdy!