It’s that time of year again.

The time when, with four rounds to play, we routinely have to pick a new, otherwise objectionable team for which to barrack each week.

It’s one of the travails of following a side perennially on the cusp of making finals (and generally failing to do so) – our fate, to some degree, rests in the hands of the teams playing our fellow contenders for the final eight.

It almost (almost!) makes one wistful for those early seasons under Neil Craig, who refused to countenance any talk of finals until the Crows had the requisite 13 wins, which we managed by Round 15 in his second year.

These days, however, we languish in that other camp – those with “Mathematical Possibilities” of September action. Those whose every win is said to have “kept their season alive”. Those who need others to fail that we might succeed.

Thus, yesterday, we briefly became Melbourne supporters. It didn’t last very long and I don’t recommend it to anyone.

Annoyingly, instead of just getting comprehensively rolled and allowing me to get on with my afternoon, the Dees rallied for the middle quarters and genuinely looked as if they could all but knock North Melbourne out of contention. They didn’t, of course. 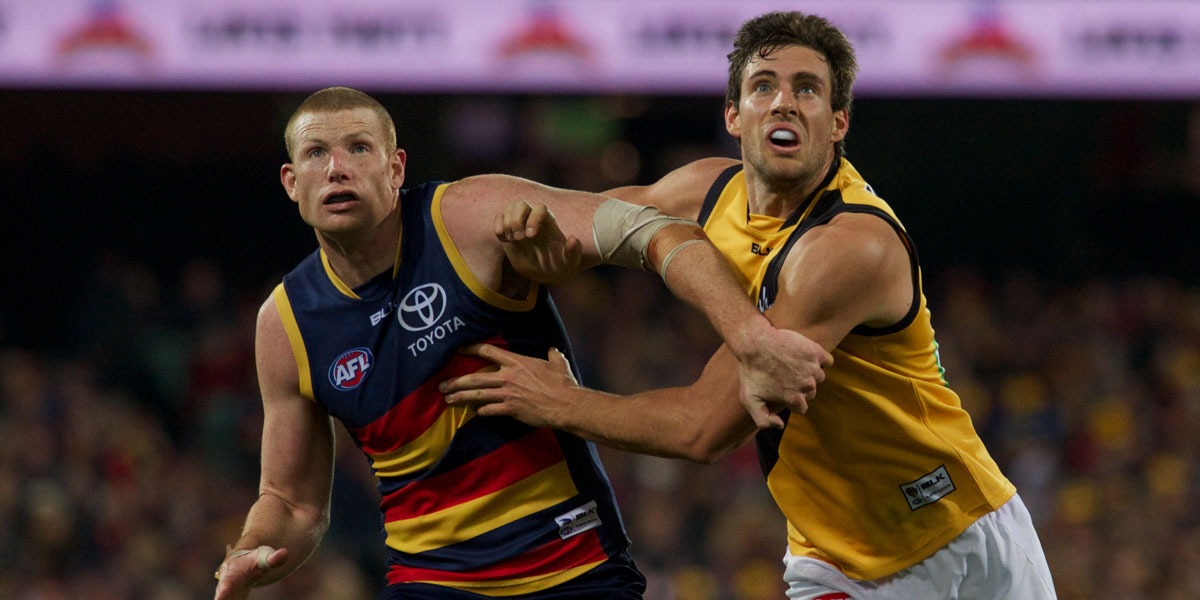 Turns out the game was but a microcosm of the Demons’ season; glimpses of great promise but ultimately leaving you feeling foolish and embarrassed for getting too carried away.

Still, spare a thought for their bona fide supporters, who have to endure this behaviour every week!

But given the euphoria that greeted Adelaide’s comprehensive dismantling of the Kangaroos way back in round one, when the all-too-brief Walsh era began in such emphatic style, it would be seriously annoying if they end up nudging us out of the eight come season’s end.

There were glad tidings to celebrate though, for while we remain a distinct chance of finals action, the Power remain a Mathematical Possibility only if the mathematician in question is incurably optimistic or stoned.

I recall one significant game we played against North Melbourne wherein both sides had the same number of scoring shots (30), but Adelaide ran away with a 35 point win. The Crows kicked 15.15 to the Kangas’ 8.22. The game was the 1998 Grand Final, by the way, so the errant kicking was reasonably significant.

I don’t recall this merely to gloat (although that is an incidental benefit), but to ponder the possibility that while Adelaide’s shocking (shocking as in bad, not shocking as in surprising – it was more routine than surprising) conversion rate on Friday night did not cost us the game against Richmond, it may yet cost us the season.

The Crows scored 11.22 to the Tigers’ 8.4 – 33 scoring shots to 12 – to run out modestly comfortable 36-point winners. It should have been a shellacking, but we were all just pleasantly surprised to have knocked off the team that had just beaten the rampaging Hawks.

And it was a resolute win, especially coming off that debacle in Sydney. Sauce Jacobs was about our best on ground, happily ensuring we weren’t beaten by two of our ex-ruckmen in successive weeks. 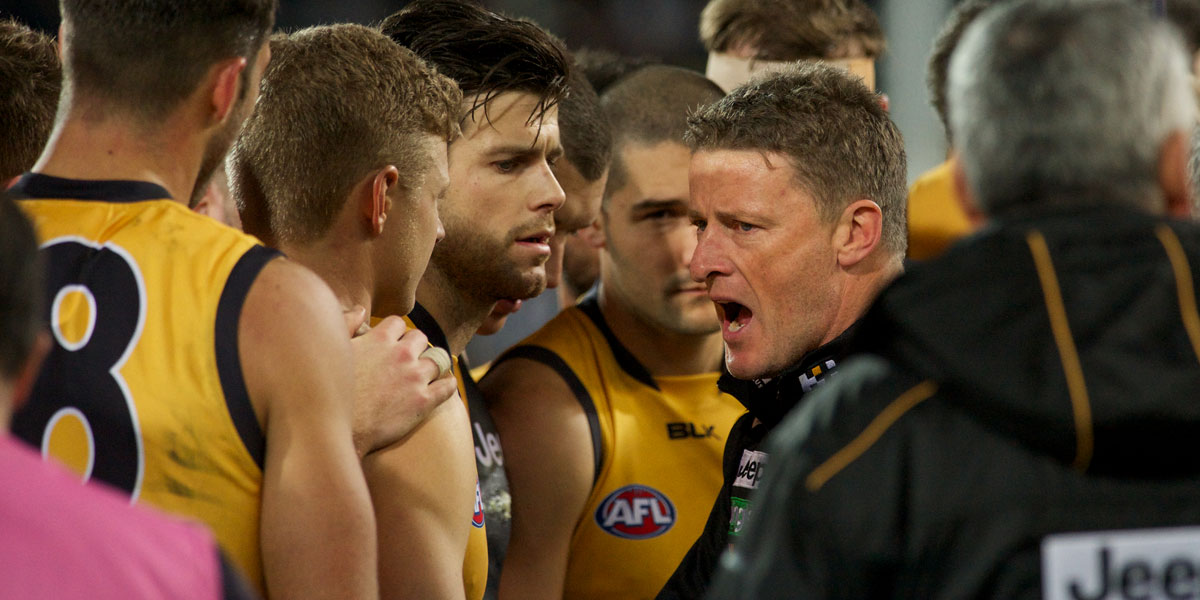 The AFL, evidently aware the Fumbles had just returned from the Hellenic Isles, kindly arranged to have the match broadcast in Greek on its website (although this might also have had something to do with its Multicultural Round). In any case, it mattered little, as the only local language I mastered was how to order a beer, and even then I still relied on the international sign-language for “bill, please”. I certainly didn’t learn the local lingo for “the Crows are kicking themselves out of this contest!”.

Thankfully they didn’t, but as the weekend wore on, the poor conversion became more costly.

Geelong beat Sydney and bolstered their percentage to 104.56 per cent, just shading Adelaide on 104.51 per cent. Had just one of those goals sailed through, our percentage would be 104.84 per cent, and we’d be sitting in the eight. Just.

And, of course, our fortunes are intrinsically entwined with the Cats’, since we play them in Geelong in the final round, likely to determine which side proceeds to the play-offs.

Obviously, we’ll all feel very sorry for them if they lose, after their lean run of success in recent years.

But it seems an apt finale: the two teams that were denied the chance to play one another through the cruelest twist of fate only last month (was it really only last month?!).

In the normal run of things, whichever side had taken the four points that day would now be a game clear in the eight, a mere four points shy of the double chance and breathing relatively easier.

Instead, the Crows and Geelong split the points, and are now locked in a bizarre no-man’s land on the cusp of the finals. The Cats are seeking their ninth straight campaign, as we hold our breath for only our second major round appearance in six years.

And, of course, at the end of it all our most prolific player may run off and join them. Happy days. 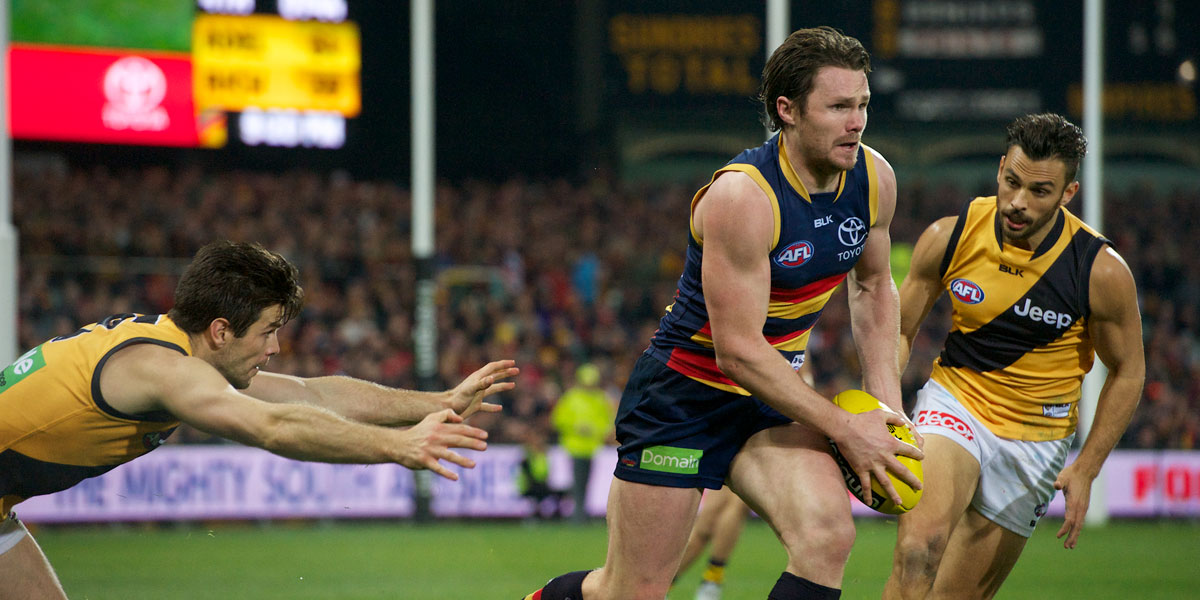 There were glad tidings to celebrate though, for while we remain a distinct chance of finals action, the Power remain a Mathematical Possibility only if the mathematician in question is incurably optimistic or stoned.

The Bulldogs doubled their score on Saturday, in a game Port literally had to win to have a hope in hell of graduating to the major round.

If Melbourne’s stop-start effort against North neatly summarised the Demons’ season, there was a moment that encapsulated Port’s: when Jasper Pittard fumbled the ball over the line mid-kick-in, and in the resulting ball-up Paddy Ryder – the boom recruit who was supposed to be the missing piece of the premiership puzzle – deftly tapped it back for a behind. Which, given that strategy was fairly unequivocally banned by the league some time ago, resulted in a free kick and goal to the Dogs. It was a minute or so of lunacy that seemed to sum up 2015 for Port Adelaide: the right personnel delivering a diabolically wrong result.

The good news for Port supporters is that we know how you feel, and it’s quite possible you can recover from this fall from grace to play finals again within three years. Maybe four, if you don’t kick straight.