It was about something more than footy.

Thousands of supporters, decked in the colours of both Sydney and Adelaide, streaming into the SCG on a Saturday afternoon to make a statement. The booing would end today. They would stand with Kurt.

No more would they accept the angry jeers that regularly greet the lanky forward-cum-ruckman whenever he misses a goal from close range or handballs straight to Cyril Rioli during a Grand Final.

In the end, it’s not really about the football.

It’s about an affluent white man being paid a sum disproportionate to his variable output, who left one club in a shambles citing homesickness only to go to another club far from home.

Some supporters say they’re just booing him because he’s annoying and a bit crap and it’s not about the money, but of course it is. It always is.

But gloriously, it wasn’t just other rich white males that spoke out in solidarity – as the week wore on, Australians from all walks of life were Standing With Kurt.

State premiers offered national leadership, while even Prime Minister Tony Abbott said while he hadn’t heard of Kurt Tippett per se, anyone who had managed to annoy people in South Australia deserved “a basic amount of respect”.

Social commentators weighed in, presenter Stan Grant penning a moving piece empathising with Tippett’s plight, as someone who had also left a commercial organisation in controversial circumstances.

The Adelaide players put past grievances behind them, celebrating their occasional goals by performing the three-quarter-time-OTR-dance-off, while his Swans teammates recognised Tippett’s naked mercantilism by wearing a “specially designed guernsey featuring the names of those who have pre-ordered the guernsey from the Swans Shop”.

Their supporters, meanwhile, rallied the faithful in support of their Number Eight, by standing in unison in the eighth minute of the first quarter to applaud warmly (although that might have been because he had just kicked one of his side’s many goals).

And in one particularly poignant tribute, Josh Jenkins – the man who now wears Tippett’s discarded Number Four Adelaide guernsey – paid a respectful homage to his predecessor by shanking a sitter from 10 metres out.

Yes, this was truly a game that was about something more than football. Which was a relief, given the lousy standard of football on offer from the visitors.

We play football’s ultimate middling team on Friday night, with Richmond set to pass us the symbolic baton; if we lose, we will likely cement ourselves in the Tigers’ traditional ninth place on the ladder, with Port closing the gap on us for a finals berth.

There was, at least, something novel about the Crows turning up to such an emotion-charged event and, for the first time in several weeks, not being the sentimental favourite.

Even the video review system was barracking for Sydney, not only denying Matthew Wright an obvious goal, but also erasing about the only noteworthy thing he’s done all year.

There’s an old saying: be careful what you wish for.

Last week, the Fumbles lamented that ol’ mate Kurt had been ruled out for a fortnight with a broken hand and thus couldn’t take the field against the Crows.

Not only did he take the field, he kicked three first quarter goals (none of which was even overturned on review, despite all being entirely legitimate). So that didn’t go very well, then.

He then proceeded to out-ruck Sauce Jacobs for much of the game, as I grimly recalled the words of Admiral Isoroku Yamamoto after the Japanese attack on Pearl Harbor: “I fear all we have done is to awaken a sleeping giant and fill him with a terrible resolve.”

By half-time I was working up my best Maxwell Smart impression: “Hey there, Kurt … I hope I wasn’t outta line with that crack about the eight possessions a week.”

This game, after all, was meant to be the football equivalent of running into your ex-girlfriend on a night out: you want to be at your best, a picture of success and self-fulfilment, leaving her wondering why she ever left you.

And instead we delivered the football equivalent of your ex discovering you weeping face-down on the footpath in a pool of vomit.

I had long hoped any future Adelaide encounters with Tippett would carry the wounded spite of a post-2008 Geelong-Hawthorn game, with the wronged side unwilling to bow in defeat.

But alas, we are no Geelong. Though, to be fair, the Swans are no Hawthorn either, as they established in last year’s Grand Final.

And at least we could appreciate the rich irony that we were finally playing the big man into form, something we rarely managed for much of his time in Adelaide.

Luckily, he took us on a wistful trip down memory lane as the game wore on, spraying regulation shots past the behind posts. Ah, the memories.

At the end of it all though, Tippett did play a decent game with a broken hand, while most of the Crows, including Tex Walker in his 100th game, were ordinary despite all their phalanges evidently being in full working order. (Remember the good old days, when Tex used to kick straight and Kurt didn’t?)

So I hope his former teammates, in this week’s spirit of sportsmanship, all went to him on the final siren and shook his hand. Very bloody firmly.

And, of course, a crap weekend is always compounded by Port winning. That’s a given.

There were two more ironies of note around the grounds this weekend: Bernie Vince, who we traded to try and get back into the upper echelons of the draft after Tippett left, was best on ground in Melbourne’s shock win over Collingwood.

And Jesse White, who Sydney originally tried to offload as compensation for a Tippett trade, was dropped by the Pies after continued poor form.

So, swings and roundabouts.

Sadly, the Crows were more Jesse White than Bernie Vince, playing with a palpable listlessness and lack of intent. It’s hard to know what to make of any of this; have the preceding weeks drained the squad’s collective emotional reserves? Or are we just a middling football team?

We play football’s ultimate middling team on Friday night, with Richmond set to pass us the symbolic baton; if we lose, we will likely cement ourselves in the Tigers’ traditional ninth place on the ladder, with Port closing the gap on us for a finals berth.

And even then, I can’t quite bring myself to wish ill on the Tigers (or as much ill as normal, in any case) after their altruistic gesture of wearing their Indigenous Round guernsey in support of Adam Goodes. The dual Brownlow medallist eschewed his side’s humiliation of the Crows after weeks of incessant heckling from crowds across the country. In schoolyards, you are taught to stand up to such taunts, but when you do it invariably results in more sustained taunting.

Evidently, the collective mentality of football crowds is not so far removed from the schoolyard.

In such situations, it actually doesn’t matter how the slight was intended, it matters how it is interpreted.

And if the subject of your ire feels racially vilified, and tells you so, and you keep dishing the same treatment because you didn’t intend it that way … well, maybe it doesn’t make you racist.

But it probably makes you an arsehole. 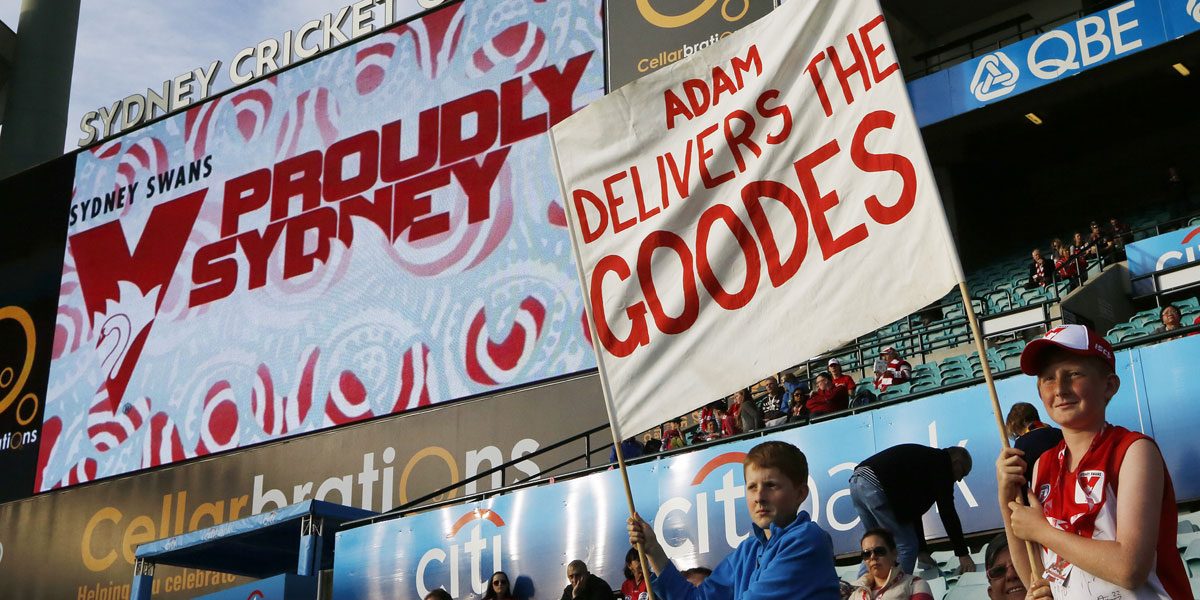 A mate wrote on social media this week that he had always liked Goodes but felt of late that he was putting himself before the game. Which is fair enough.

But two of his friends (not mutual) took the opportunity to comment on this post that Goodes was an “ape” (along with various other invective), which kind of ruins the notion that this is a reasonable national conversation to have.

And really, if you find yourself in the same moral universe as the likes of Shane Warne, Jason Akermanis, Sam Newman and Andrew Bolt – the axis of boofheadedness – you really have to start questioning your values, don’t you?

At the end of it all though, this whole episode just makes no sense: why would anybody want to boo Adam Goodes when they could be booing Kurt Tippett?