On Friday, a friend tried to explain to her eight-year-old son why there would be no AFL football in Adelaide on the weekend. Like many other parents around South Australia, she struggled with her explanation – a balancing act of conveying the terrible truth while shielding his youthful innocence.

The boy nodded stoically and declared: “We must fly as one.”

I wasn’t going to write this column this week.

After all, the grist to our Fumbleland mill – banter, rivalry, taking the piss and hatin’ on Port Adelaide – none of it seems either relevant or even appropriate anymore.

And, in any case, what is there left to say?

It was going to be a no-brainer too. Port losing to a Tippett-less Sydney had given me enough material to see out the weekend, even without the Crows playing.

Which, of course, they didn’t.

No, instead 20,000 supporters – and not just Adelaide supporters – gathered at the Oval and stood in silent contemplation, embraced, shared a drink and dobbed footballs around the turf. That was nice.

I watched the Crows-garbed hordes swell into Adelaide Oval, but only on a screen many kilometres removed.

Game-day plans abandoned, I took my family away for the weekend. That, too, seemed an appropriate response.

As Phil Walsh himself said, we all grieve differently.

But if the Adelaide Football Club can find a way to go on this season, it seems only reasonable that my jaded little Siberian outpost of football fandom can do so as well.

It will be sombre, sad and difficult, and it will never be quite as it was. Maybe one day we can even start hatin’ on Port Adelaide again. I do hope so.

As reporters, we tend to be assigned our patches to oversee. Politics, courts, crime, sports … each has a different feel, a different rhythm. And seldom, if ever, do they intersect.

Senseless violence is the daily bread of those covering courts and police rounds, for whom a big news day might mean a siege or a shooting. By contrast, a big news day in sport tends to be a team losing a final, someone getting the sack or walking out on a club, or a drugs scandal.

It seems to me in hindsight that when I first heard the news about Phil Walsh, I was processing it as a journalist. My editor called. Have you heard what’s happened? I hadn’t, but it was clearly a big deal. Was this about work or someone I knew? Phil Walsh has… What? Quit? Been sacked? What else could it be? … been murdered.

These two concepts – the coach of the Adelaide Crows and violent crime – are heard every day in newsrooms, but in the same sentence it just sounded bizarre.

I recalled a similar response learning of the tragic death of Port Adelaide player John McCarthy in 2012; again, it was my then-newsroom boss that told me. I was expecting to hear he had got into trouble on his overseas trip. Had a run-in with authorities? An accident, maybe? 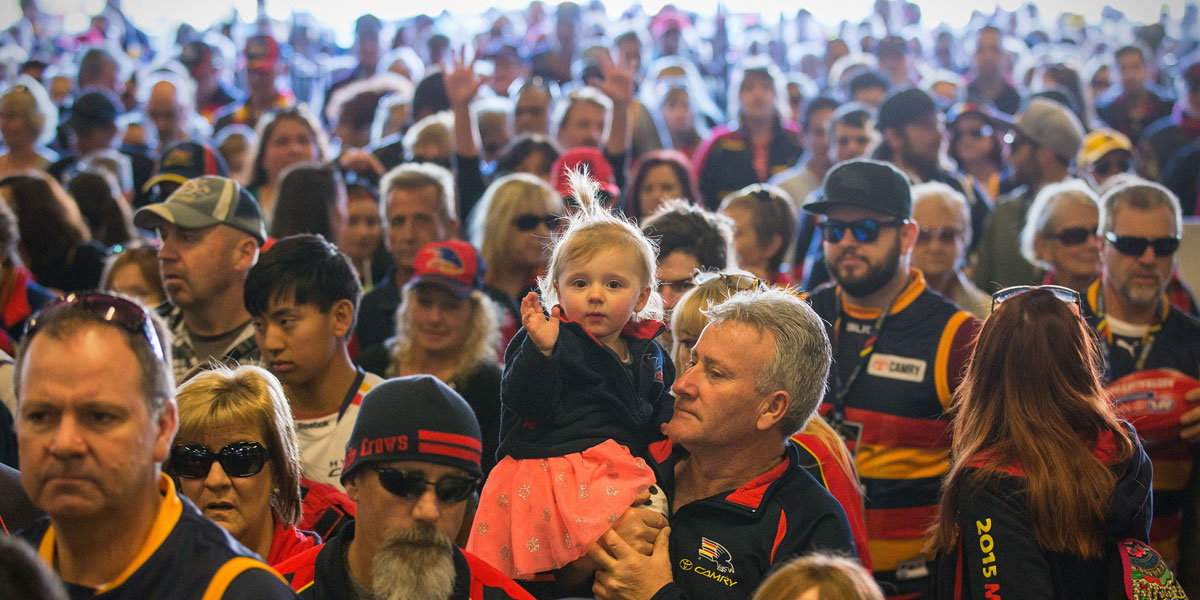 Whether it’s a loved one or just someone you’re used to hearing about in a context so steeped in life and enthusiasm, any time you hear that phrase – “they’re dead” – there’s something that doesn’t compute. That phrase snatches away any reasonable retort. It snatches away any hope.

McCarthy had been in my AFL Dream Team that year. Now he was dead. Guys in Dream Teams aren’t supposed to die.

And AFL coaches certainly aren’t. They’re supposed to get sacked, or shove drunken hecklers, or go to Europe to study while suspended for 12 months after a drugs probe. But not this.

Weirdly, all weekend I kept hearing in my head the voice of Basil Fawlty after he discovers one of his guests has carked it overnight: “It’s so final, isn’t it? I’d say it was pretty bloody final!”

The Crows called this a crisis unprecedented. In any crisis, the first question is: ‘What can be done?’

In death, though, there is nothing to be done. Nothing you can say. It is final.

I didn’t know Phil Walsh; I had reported and written on him at a distance, but never exchanged a word. I didn’t know him, except in the way all supporters knew him – as the public and human face of the Adelaide Football Club. Staunch or smiling, his lot was to carry on his shoulders the hopes of a passionate supporter base. When the Crows began in 1991, the state was crippled by economic ruin and an all-pervasive lack of confidence. In that context, their early success meant something more than a team merely finishing atop the table. In many ways, it literally did restore the Pride of South Australia. Correspondingly, there has probably been a disproportionate amount of expectation heaped upon the club’s collective shoulders in the years since, and much of that was invested of late in Phil Walsh.

So much hope. So much expectation. It’s so final, isn’t it?

It seems somehow reductive, trivial, to consider where to now for Adelaide’s season. After the cancelled Geelong game, there are two away games, in Perth against the Eagles, and in Adelaide against the Power. The Cats, West Coast, Port. He coached them all. 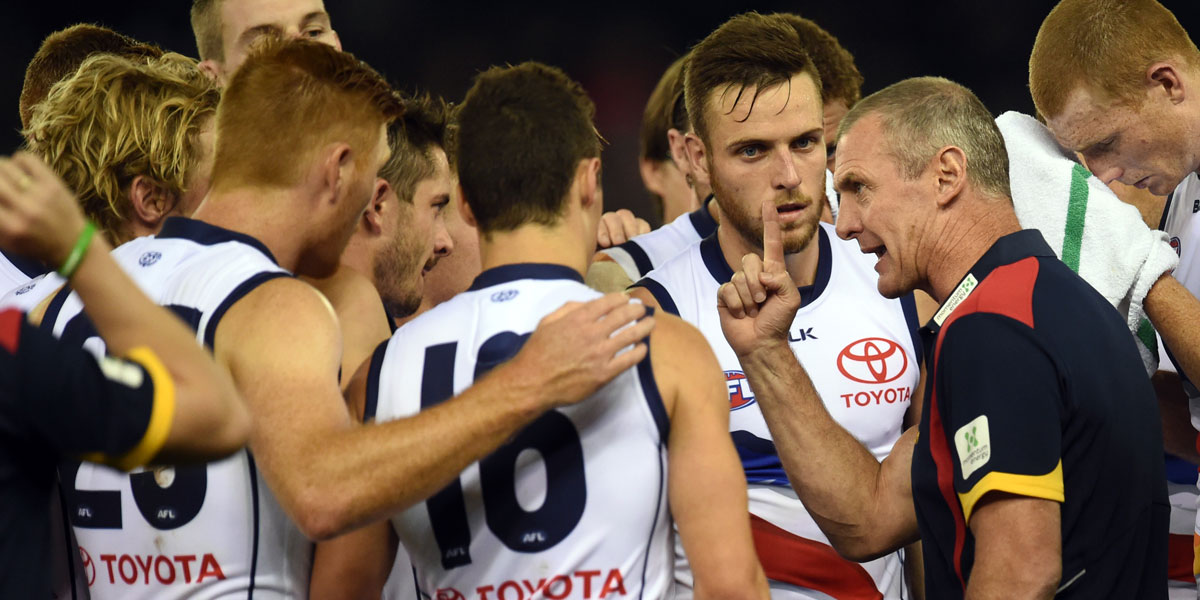 What difference could those two premiership points have made? And does it really matter now anyway?

Of course it does. It matters more than ever.

To say there is nothing left to achieve this year would be to undo all the work Walsh put in to making 2015 a success since he arrived at West Lakes nine short months ago.

Sure, the players don’t need to feel the added weight of his legacy on their shoulders, and no-one can gamely predict how they will respond from here, either individually or collectively.

But overtly or indirectly, every skerrick of success will be a tribute to the man that started the journey. He spoke of building a car and driving it as fast as possible in the right direction.

The journey may take longer than we hoped, but the keys are waiting in the ignition.

He spoke of channelling frustration to create great art. His masterpiece is sadly left unfinished; but many a great artist leaves behind unfinished works. They may be unfulfilled but that doesn’t make them any less masterful.

So we carry on, because that’s the one thing we can do.

It will be sombre, sad and difficult, and it will never be quite as it was. Maybe one day we can even start hatin’ on Port Adelaide again. I do hope so.

But in the meantime, that social media slogan that only six months ago seemed just a wee bit naff is suddenly the perfect expression of a wounded community that has set aside rivalry, banter and self-interest to stand arm in arm in reflection, bereavement and solidarity.

For now, together, we fly as one. All of us.