There are few moments of schadenfreude more satisfying than when Port Adelaide suffers a devastating defeat.

And there are few defeats more devastating than losing to a side that had, by the halfway mark of the year, won exactly zero AFL matches on Australian soil.

I could go out on a limb to say I haven’t enjoyed a loss so much since the Power hosted Gold Coast in 2011, or visited Greater Western Sydney in 2012.

Of course, there would be no need for such schadenfreude if one supported a team that was sufficiently competent that one could simply celebrate its various successes, rather than take disproportionate joy in the failures of others.

But one doesn’t, does one?

No, the Crows fumbling their way to a five goal home defeat against Hawthorn was monumentally depressing, especially in a milestone match, albeit an entirely confected one, celebrating 24-and-a-half seasons in the AFL.

The faux-anniversary and familiar final quarter fadeout merely combined to remind ourselves how long it’s been since back-to-back premierships and, moreover, to emphasise that one flag every twelve and a half years is actually a pretty average average in an 18 team competition.

For, in their manifest generosity, the Power ensured the Thursday night loss didn’t ruin my entire weekend, and, by late Saturday, my mood had lifted considerably.

Mitch Grigg had some poise, but he appears to have become the anti-Pacino in the Crows’ lineup: just when we thought he was in, they pull him back out.

It’s a guilty but delicious pleasure to jump on social media after a Power failure and observe the Port supporters eating their own. It’s a bit like being awkwardly stuck at a dinner party when a marital spat erupts, with partners telling their nominal loved ones just what they really think of them – the sort of stuff they’d never normally admit and, having done so, can never take back.

The umpiring seems to be the default culprit whenever Port fail to get themselves over the line, even if there was some justification for the ref-bashing this week (which just made the schadenfreude sweeter still). Besides the umpires, poor old Mitchell, Jonas and Pittard seem to have become perennial whipping boys: “Put a line through his name, just not up to AFL standard,” the faithful fume.

Evidently Jay Schulz copped a fair brunt as well after he capped off a quiet night by sending a sitter hurtling into the woodwork when the game was there to be snatched away in the frenetic final term. So much so that his wife Amy took to Twitter to castigate those having a go, explaining that the spearhead had just been told she was in the hospital two hours before the game.

Which is, of course, entirely reasonable.

Indeed, half Schulz’s teammates must have heard similarly bad tidings before the game, or else come out in sympathy with his plight, because they collectively played a hesitant, listless game, punctuated by bursts of brilliance that invariably fell quickly away again.

It’s kind of the competition benchmark by which every other team’s supporters assess your competence, or lack thereof: “Oh yeah, at least we didn’t lose to them!”

Last year, of course, it was Melbourne, and it was the Crows whose one-kick defeat haunted them throughout an ultimately fruitless season.

So while I acutely appreciate the “there but for the grace of God” mentality, the fact is my team has already played Carlton and managed to come away with a win, despite doing our utmost to achieve otherwise.

So whatever else happens this year (and that includes another Showdown – a Power home game, no less) we can now offer the unanswerable retort: “Yeah, but at least we didn’t lose to Carlton!” 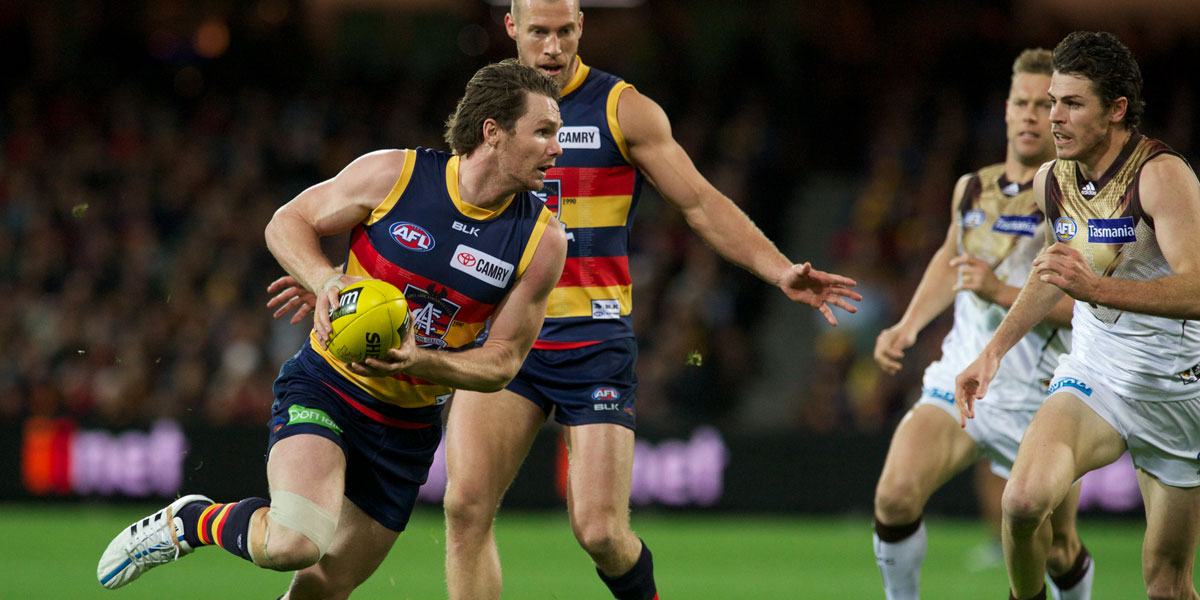 But while it’s easy to bash the poor old Power (fun too!), the sad reality is that kicking Port when they’re down is about the only kick with which the Crows can hit a target this week.

If there was a moment the Fremantle Dockers came of age in setting up the team that is now favourite to take out this year’s premiership, it arguably came somewhere between the 2007 and 2008 national drafts. In the former, Freo selected Rhys Palmer with its first-round pick, a player who amassed possessions but frequently burned the ball. A year later, the Dockers’ first selection was Stephen Hill, who collected it less but made every touch count.

Subsequent draft selections, and the 2011 trading of Palmer to GWS, suggests the shift was more strategic than symbolic.

The problem for the Crows appears to be we have more Rhys Palmers than Stephen Hills.

And we may soon have to wrestle with the awkward realisation that, despite fervent hopes to the contrary, we are simply not a very good team.

Watching Adelaide play over the past two and a half seasons (exactly one-tenth of our tenure in the AFL), it’s often evident their problem lies not in their endeavour, but their decision-making. Lousy decisions under pressure are not the exception, but the norm; and with a gameplan emphasising swift ball movement, ‘under pressure’ is pretty much the default place to be. Adelaide is now 17th in the comp for disposal efficiency, their 69.6 per cent accuracy only bettering the ailing Suns.

Mitch Grigg had some poise, but he appears to have become the anti-Pacino in the Crows’ lineup: just when we thought he was in, they pull him back out.

The only consolation on Thursday night was that we never have to wear an away strip as bad as Hawthorn’s, whose players looked like extras from a bad 70s sci-fi show.

The fallout, though, is more worrying than the loss itself, amid suggestions Dangerfield was yanked from the ground for deviating from his role at stoppages. I note that Dangerfield was taken three picks below Rhys Palmer in the 2007 draft. There may be something in that, but probably not.

And in any case, we shouldn’t single him out because, of course, there is no “I” in “team”.

Although, conspicuously, there are two in “Patrick Dangerfield”.

There may be something in that too. But probably not.