But he confessed to having lost all motivation for the game, disrespecting it and no longer caring how he performed in grand slams.

“To me, this is one of the biggest tournaments in the world that I have done really well in my career and, yeah, I just couldn’t find anything,” Tomic said.

“It’s happened to me a lot. Just can’t find anything on the court.

“This is my eighth Wimbledon, or ninth I think. I’m still 24, and it’s tough to find motivation.”

Despite being heard complaining of a back problem during a medical time-out midway through the match, Tomic later said he wasn’t overly injured at all.

“It was definitely a mental issue out there,” he said.

I feel holding a trophy or doing well, it doesn’t satisfy me anymore

“I just tried to break a bit of momentum but just couldn’t find any rhythm and, you know, wasn’t mentally and physically there with my mental state to perform.

“I don’t know why, but I felt a little bit bored out there, to be completely honest with you.

“So I feel holding a trophy or doing well, it doesn’t satisfy me anymore.

“It’s not there. I couldn’t care less if I make a fourth-round US Open or I lose first round.

“To me, everything is the same. I’m going to play another 10 years, and I know after my career I won’t have to work again.

Clearly emotionally burnt out after almost a decade on tour, the dual grand slam junior champion is unsure how to rediscover the spark but, for now, ruled out taking a break from the sport.

“I’m happy with my life and… we have to look back,” said the two-time grand slam junior champion.

“I was in worse positions than this, you know, at 120, 130 in the world, and then managed to turn around the past few years and be a top-20 player.

“But it’s my choice. I know I have to work hard. For sure I don’t do the right work.

“I know I have another 10 years to go. We all work for one thing. And I believe you have to respect the sport.

“But I think I don’t respect it enough, yes, because I – you can say – (am) super talented… I just believe playing many years on tour now has sort of taken a toll.

“You need to find that sort of energy. I’m just trying to find something. Now heading into the US. Maybe (I’ll) play well in some tournaments there.

“Nothing to lose. Just try and enjoy it.”

Premature exits for Bernard Tomic, Thanasi Kokkinakis and Jordan Thompson overnight left Australia without a men’s singles representative in the second round at the All England Club for only the second time since 1938.

And only Russian-born qualifier Arina Rodionova – who fought off seven match points – has saved Australia from a humiliating and unprecedented first-round wipe-out.

Rodionova stunned former compatriot and 16th seed Anastasia Pavlyuchenkova – a player ranked 149 places above her and a quarter-finalist last year – 3-6 7-6 (7-5) 9-7 to be Australia’s sole first-round survivor from nine starters at tennis’s greatest event.

Daria Gavrilova dubbed herself a grand slam choker after adding a despairing first-round Wimbledon defeat to her depressing run at the majors.

Little more than a month after also falling in the opening round at Roland Garros, the new Australian No.1 suffered a gut-wrenching 6-4 2-6 10-8 loss to Croatian qualifier Petra Martic.

Despite her steady rankings rise to 20th in the world, Gavrilova has won just four grand slam matches in her past five majors – and only one outside of Australia.

“I think I can’t really cope with the grand slam pressure,” said the former junior world No.1.

“Like I seriously feel like I’m more intense on the court and I was getting very hot and I was like ‘oh my god, what’s happening?’

“I never sweat and I was feeling hot for some reason and I never have to feel like ‘oh my god, why is my grip so sticky?’ and stuff like that. 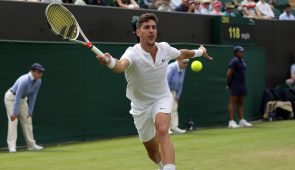 Close but again no cigar for plucky Kokkinakis

“Before the match, I was calm and I had great preparation and in my pre-match warm-up I didn’t miss a ball.”

The 23-year-old’s candid confession came despite the Russian-born, Melbourne-based talent storming to the second week at the past two Australian Opens.

“I was thinking the same after the match but, I don’t know why I play well in Australia,” Gavrilova said.

“I’m more familiar and I stay at home and then I play night matches. It’s almost more pressure there, but I almost don’t feel it or I embrace it.”

Gavrilova said she may consider turning to a sports psychologist but hoped to conquer her demons independently.