Caught up in the weather dramas on a wet and windy Sunday in Paris were Australian pair John Millman and Jordan Thompson, both of whom were unable to take the court for scheduled matches.

Half of the matches on opening day were cancelled without so much as a warm-up and barely a quarter were completed.

One of the few that did go the distance was that of combative rising star Kyrgios, who waged a verbal war with chair umpire Carlos Ramos before downing Italian rival Marco Cecchinato in straight sets 7-6 (8-6) 7-6 (8-6) 6-4.

The steady light rain ensured the clay surface was even more slippery than usual, and may have contributed to Kyrgios taking a hard fall early in the first set.

The 21-year-old slid when he came to the net to hit a volley, but was beaten and fell to the floor as he swivelled to reach Cecchinato’s winner.

“When I woke up this morning and saw the rain, I knew it was going to be heavy conditions,” Kyrgios said.

No stranger to on-court controversy, the enigmatic tennis star found himself in a slanging match with chair umpire Carlos Ramos over a code violation for shouting at a ball boy, which the Australian described as “rough”.

He said it would be “a circus” if he shoved an umpire in the manner world No.1 Novak Djokovic did last week, but insists he’s not worried about being the victim of double standards, despite again earning the ire of a court umpire in his feisty straight sets win.

Kyrgios argues he had to raise his voice when requesting a towel from a ball boy because of noise made by the crowd following a crucial tiebreak point – with the 20-second limit between points leaving little time to wait for the crowd to quieten down.

“Every time I get a towel from a ball kid, I say thank you,” he said.

“Sometimes when you’re a bit frustrated you do … obviously, you know, not scream at them, but you do get a little mad at them.

“The crowd was going on (and) I’m not going to wait for the crowd to quieten down to get my towel. I just felt like it was a bit rough.”

The 21-year-old may face further sanctioning for his comments directed at Ramos, who he said showed “unbelievable bias” and whose decision he described as “f**king bulls**t”.

Kyrgios has already been put on notice by Australian Olympic team boss Kitty Chiller, who may have been inclined to turn away from the screen as commentators apologised for his MA-rated language.

But of greater concern for Kyrgios is the growing belief that he is held to different standards than his contemporaries such as Djokovic.

The 11-times grand slam champion was roundly criticised last week for shoving the arm of chair umpire Carlos Bernardes during a win over Rafael Nadal in Rome, but escaped sanction completely.

“I think we all know in this room if that was me that did that, it would be an absolute circus,” Kyrgios said.

“But if he did it, you know, nothing really happened of it. It speaks for itself.”

After the match, a relaxed Kyrgios said he thought referees – and ball boys – did a good job, and while he felt Ramos’ decision was “a little bit rough” he understood “it was just his public opinion on how he thought I went about it”.

“I haven’t had too many bad experiences (with umpires),” he said.

“It’s not an easy job out there, especially five-set matches, to concentrate.

Kyrgios also earned the support of his Italian opponent, who described him as a “very, very good guy”.

A host of Australians will be in action on Monday (starting Monday night AEST), starting with Millman and Thompson as the backlog of matches is cleared. 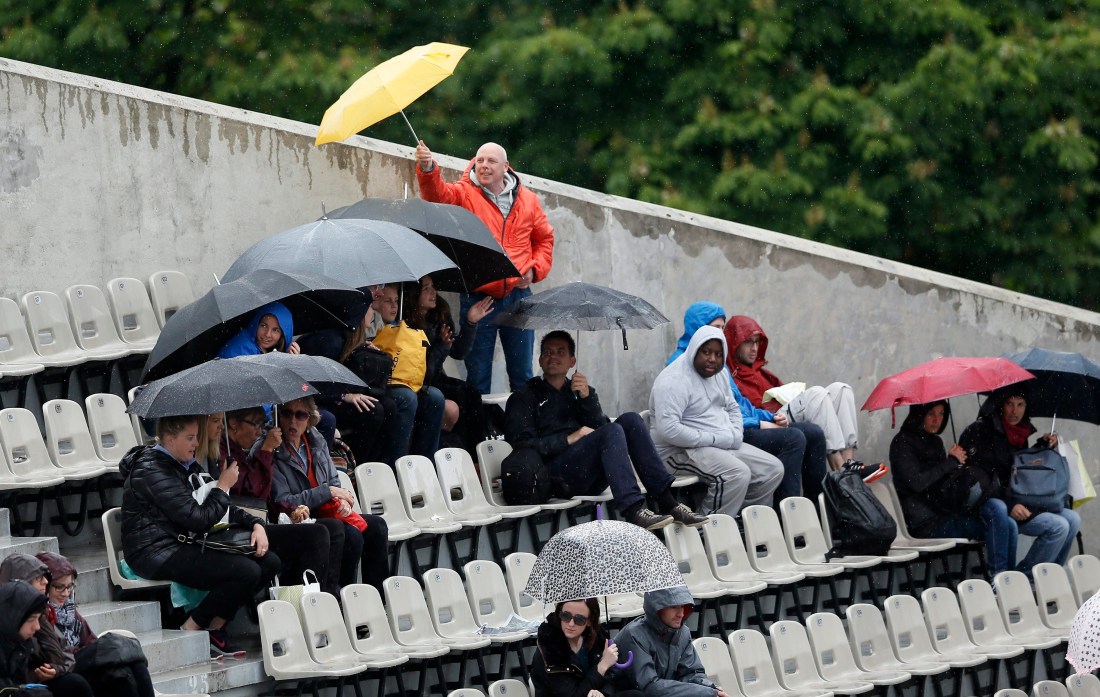 Samantha Stosur will meet the dangerous Misaki Doi as she embarks on a tricky draw that would likely require her to go through last year’s runner-up Lucie Safarova and sixth seed Simona Halep to reach a potential quarter-final with world No.2 Agnieszka Radwanska.

Australia’s remaining trio of Bernard Tomic, Sam Groth and Daria Gavrilova will all begin their campaigns on Tuesday.

Meanwhile, Kyrgios will next face Dutch world No.123 Igor Sijsling on Wednesday.

“I know he’s probably played a lot of grand slams and my good friend Thanasi (Kokkinakis) played him a while ago, so I know what kind of game style he plays,” Kyrgios said.

“I’m just glad I got through today and got a couple of days off and can do everything I can to prepare for that.”