The 2005 finalist needed two hours, 23 minutes to put away Duckworth and, apart from a brief reprieve in the second set, there was barely an easy moment.

Once the five-set king of tennis, Hewitt has lost his past six matches that have gone the distance and even his most loyal of fan must have been edgy when Duckworth led 4-2 in the third set.

But, not for the first time, the baseline warrior rallied back to win four straight games and raise the roof after clinching his first grand slam win since last year’s Open with a trademark topspin lob on match point.

“This is what I’m going to miss most – this adrenaline buzz of coming out here,” Hewitt said.

“Hearing Craig Willis announce you from Australia and the whole crowd erupts. It doesn’t get any better than that.”

Hewitt admitted it’d been difficult not to get distracted by the fanfare and emotion of the occasion.

“It was a tough situation to try and block out everything else that’s going on,” he said.

“I tried to prepare as much the same as normal and – playing Ducks (Duckworth) as well, who I’ve tried to help out for the last few years – that was really awkward.

“But I just came out and tried to stay in the moment as much as possible.”

“It’s been one of the most satisfying things of my career,” Hewitt said.

“The kids are now old enough and they’re going to have lifelong memories of dad being an old man and limping around on the tennis court.

“It’s been a lot of fun. I’m really proud that the family – Bec and the kids – can enjoy this with me.

“Obviously, it’s a really emotional time but we’re just trying to enjoy this as much as possible.”

Duckworth conceded he struggled with the role of spoiler, gunning for not only a second-round berth but also the end of Hewitt’s career.

“It was a great atmosphere … I’ll look back when my career ends saying that I shared the court with one of the best players ever in his last tournament on a big court.

“We played some good tennis out there … but, yeah, there is a lot of disappointment right now.”

Duckworth admitted he found it difficult to be cast as the bad guy in his home grand slam.

“It’s always tough playing a good friend and also someone I’ve looked up to for a number of years,” he said.

“It was a little bit different. It’s not exactly common to go out at your home grand slam, playing on the biggest court and most of the crowd’s not really on my side.

“Just the massive roar when he came out, when he was winning points was a bit odd. But it is what it is.”

Duckworth had a brief conversation with Hewitt at the net after the match.

“You’ve had a great career. You’re a legend,” he told the former world No.1.

“What made my day today was the sign from Lleyton’s son – go Lleyton,” Azarenka said.

“Just seeing him warming up and boxing, to see so much passion after so many years is remarkable.

“I really admire that.

“I hope he does well and I hope you guys support him even more because he really deserves that.”

A who’s who of Australian tennis, including Hewitt’s past four Davis Cup captains – John Newcombe, John Fitzgerald, Pat Rafter and Wally Masur – were all on hand at Rod Laver Arena to see the former world No.1 in action for possibly the last time.

Thousands of fans with the hottest ticket in town also queued outside to take their seats after Rafael Nadal’s shock loss earlier delayed the start of the big show.

But they needn’t have worried as 34-year-old Hewitt fended off Father Time – and retirement – for at least one more time, and two more days.

“He loves it – it’s amazing,” Newcombe said from his courtside seat in the Seven Network’s commentary bunker.

The victory – featuring 28 winners, four service breaks and more than the odd signature “come on” – set up a second-round crack at Spanish eighth seed David Ferrer on Thursday.

If he finds a way to win that, Hewitt will be back at Melbourne Park on Saturday playing for a dream spot in the second week in his record-setting 20th consecutive Open campaign.

First though, he must recover from last night’s sapping win. 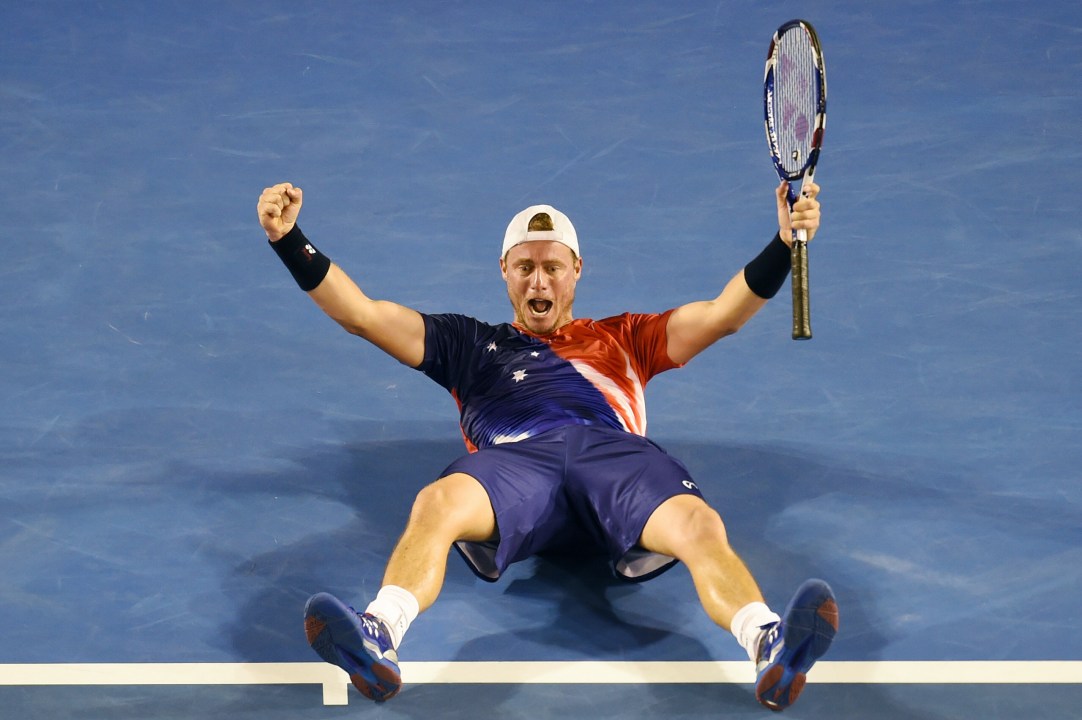 Nick Kyrgios, Omar Jasika and Daria Gavrilova will carry the local weight of expectations when the second round of the Open starts today.

All have a chance to be the first Australian through to the third round of the Melbourne Park tournament.

Kyrgios, who reached the Open quarter-finals in 2015, takes on Uruguay’s Pablo Cuevas for the first time in his career.

Cuevas is ranked No.41 in the world but prior to this year had never progressed beyond the opening round in Melbourne.

Jasika, a wildcard who won the US Open junior singles and doubles titles in 2014, faces a far more stern test against ninth seed Jo-Wilfried Tsonga.

“There’s going to be support for him, for sure … I expect to have a good fight,” Tsonga said.

“Whether you’re part of the top 100 or you qualify for the second round – at this kind of tournament it means you play good tennis.”

Gavrilova is the only remaining local hope in the women’s draw.

She is up against Petra Kvitova on Margaret Court Arena following Jasika’s clash with Tsonga.

Roger Federer, Kei Nishikori, Tomas Berdych, Maria Sharapova and Agnieszka Radwanska are some of the other seeds that will also be looking for a quick win.

Some 12 women’s seeds faltered in the opening round, but Victoria Azarenka never looked like joining them last night.

Azarenka, who won the Brisbane International earlier this month, continued her strong form by dishing out a double bagel to Alison Van Uytvanck.

The Belarusian wasted little time on Rod Laver Arena, bossing Belgian Van Uytvanck around the court to complete a 6-0 6-0 victory in 53 minutes.

“I just tried to stay focused,” she said courtside after crushing her opponent.

Azarenka is back to full fitness after a frustrating 2015 campaign, during which she failed to progress beyond the quarter-finals at any grand slam.

Already the 26-year-old, who won the Australian Open in 2012 and 2013, looks like one of the most potent players in the draw.

“I expect to have fun. I expect to take it day by day, it’s a long road,” Azarenka said.

“I just want to enjoy the journey. Right now I just can’t wait to be out here again.”