And it was a pair of players representing the old and new school – Mile Jedinak and Tom Rogic – who sparkled above the rest in last night’s 3-1 triumph.

Rogic, 24, will head to his first World Cup in Russia next year.

His fleet-footed brilliance was the chief source of delight for the 77,060-strong crowd at ANZ Stadium before Australia finally broke though on 58 minutes.

It was no surprise that it was his genius that brought the opener, frustrating the Honduran midfield into fouling him within range of goal.

The Australian captain was helped by a healthy deflection off Henry Figueroa’s stomach, only to be credited with the goal by officials after the match.

He would finish with a rare hat-trick – just the second by an Australian in the last five years – and now gets to lead Australia in his third appearance at a World Cup.

It’s a feat all the more remarkable given the year that preceded it. 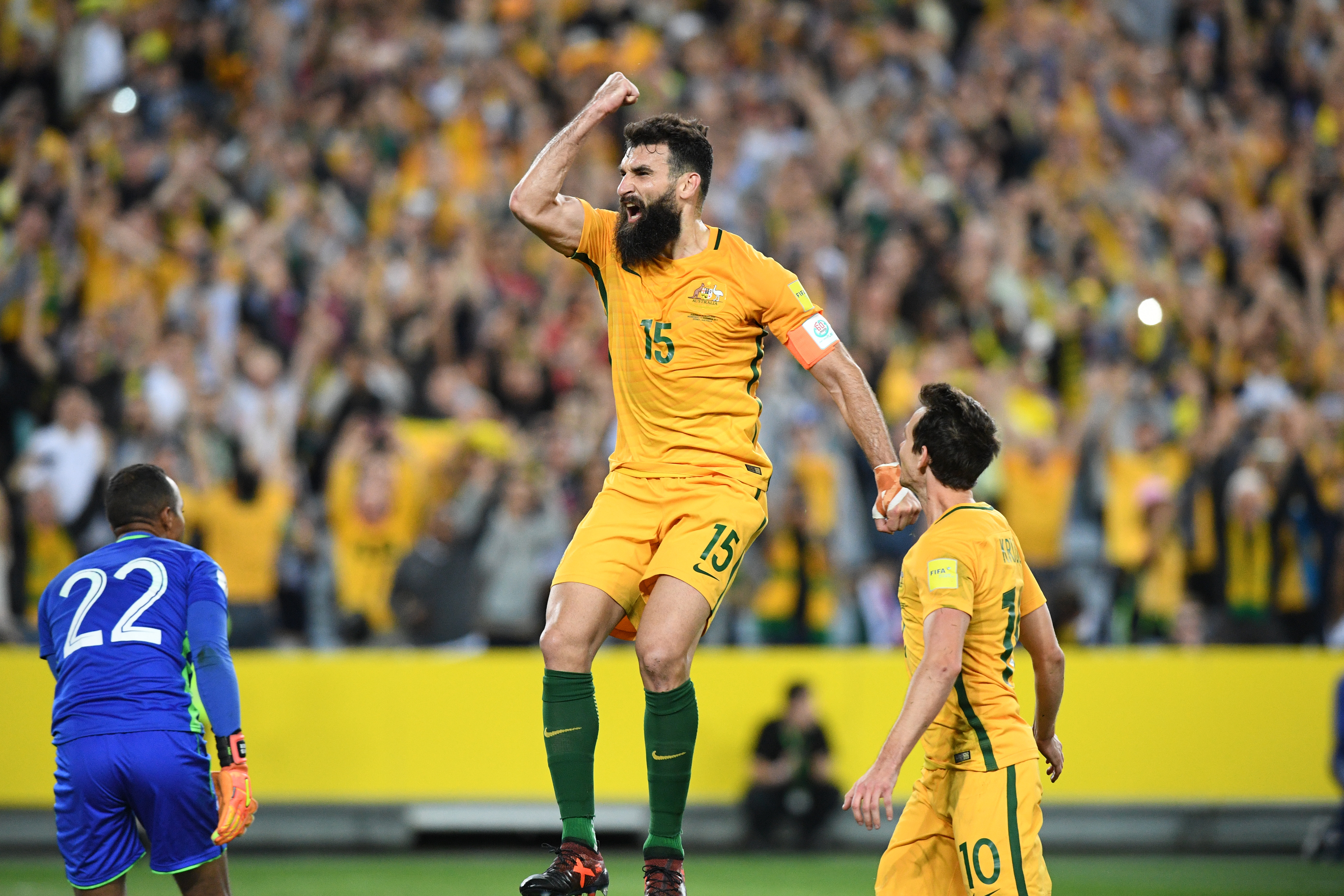 Back in June, an injured Jedinak had no idea when he’d next get back on a field, let alone play for his national team.

Five months, 180 minutes and one hat-trick later, the heroic Socceroos skipper can say with confidence that yesterday’s World Cup qualification will feature prominently on his career highlights reel.

Since hurting his groin and withdrawing from the Confederations Cup, Jedinak has been the biggest absentee in Australia’s qualifying squads and managed a total 98 minutes for Aston Villa.

He clocked nearly double that over the Socceroos’ two play-off legs with Honduras.

And while there are already numerous high points in a career featuring an FA Cup final, two World Cups and an Asian Cup triumph, this rates as at least an equal.

“Its probably right up there,” Jedinak said.

“I’m a bit lost for words on how I’m feeling at the moment, but I’m immensely proud of everybody and what we’ve done.” 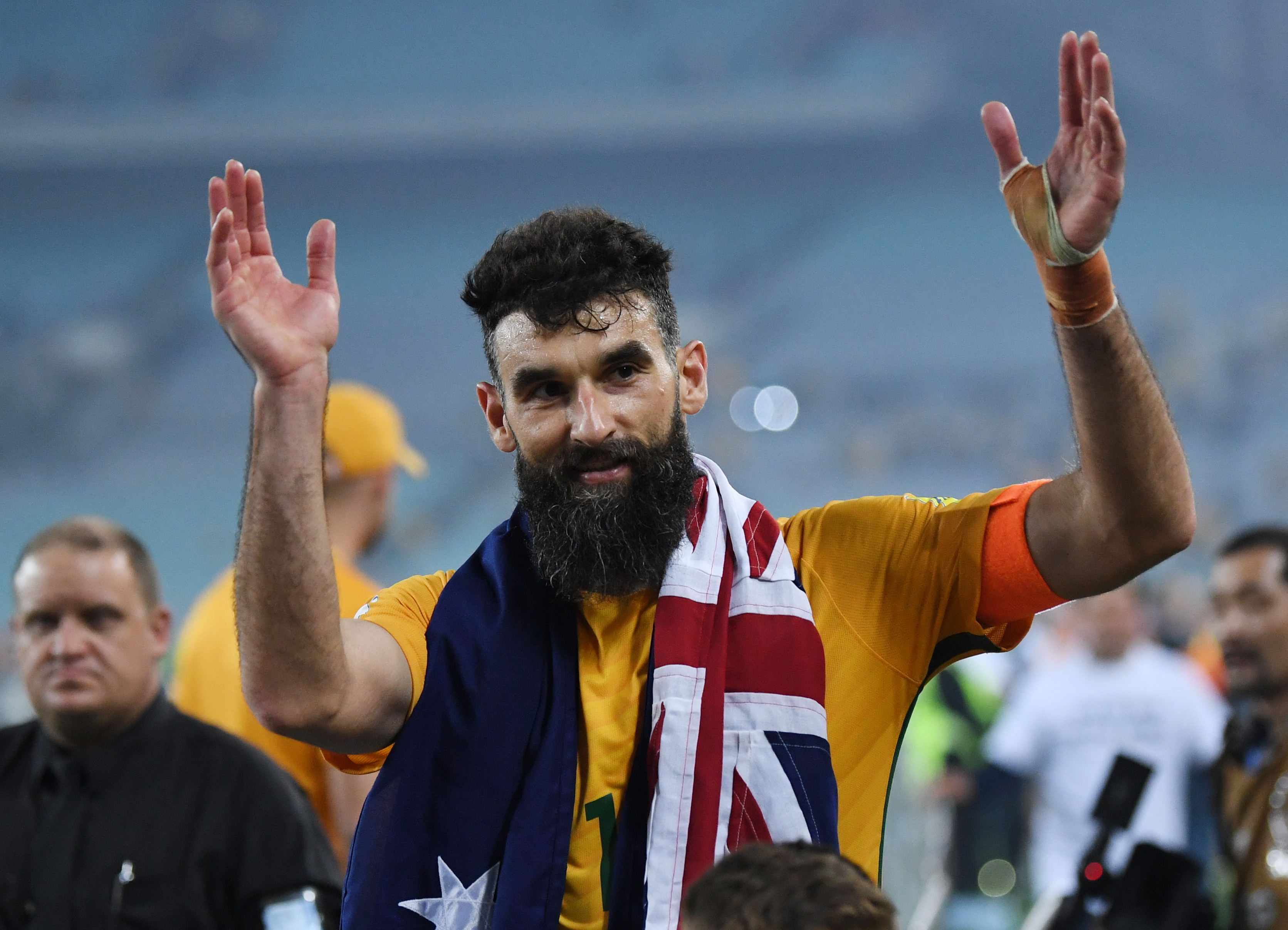 Jedinak gestures to the crowd after the match. Photo: David Moir / AAP

That was about all Jedinak could muster as he reflected on the sheer work it had taken to get his body right.

For Socceroos staff, the return was always worth it given Australia have lost only once in the past 21 internationals the 33-year-old has played.

“I always wanted to be in this position,” Jedinak said.

“To have actually done it now on both occasions is probably surprising, just being able to back up.

“It’s a credit to everybody who’s helped me along the way. There were no doubts, you can just never predict how you’re going to pull up.

“It probably means more than I can describe.

“We set out on a task a couple of years ago to qualify for a World Cup and make an impact, but first it was always getting there.

“We were one of the last teams to do it, but we did it our way and I’m very proud of what we’ve done.”

Jedinak was quicker to find his words when it came to claims by under-fire Honduras coach Jorge Luis Pinto that Australia played a “brute game” to try and neutralise gun winger Alberth Elis.

“They can talk all they want, they were aggressive as well,” he said.

“The referee blew as many fouls for them as he did for us. The yellow cards, same sort of thing.

“We just do our talking on the pitch. If you try and play football without being aggressive then you’re never going to do anything right.”

For coach Ange Postecoglou, the Australian players – old and new – had been vindicated after a long, difficult and often contentious campaign.

“They got what they deserved,” he said.

“It wasn’t luck or chance. They believed in something that they started.”

Postecoglou said Jedinak had proved an inspiring choice a captain, and deserved his moment in the sun after missing the last five months of qualifying.

“It was right he was out there today,” he said.

“When we started four years ago we literally started almost from zero in terms of experience.

“Right from day one Mile stood up and I think he’s been an outstanding captain and leader on and off the park.

“It was the likes of him and Timmy (Cahull) and Millsy (Mark Milligan), a couple of others that steered (us) through it.”

Postecoglou lauded Rogic’s showing, barely containing his excitement to give the Celtic midfielder a global stage on which to shine.

“I said to him before the game, I knew it was going to be his night,” he said.

“Tonight he was the one that provided that spark… it was always going to be a tight game and we needed someone like him or an Aaron (Mooy) to really break it open.

“Tommy was outstanding. He was brilliant tonight.”