Having locked in a six-year, $346m broadcast deal with Fox Sports, FFA has promised each of the 10 clubs a significant increase in the central grant of $2.5m a year they currently get and pledged to give them a figure within months.

Clubs are chasing $6 million a year each and will argue they deserve at least that much given the A-League brings in a large proportion of FFA’s revenue, even more so now given Fox Sports has bought the rights to most Socceroos games from the Asian Football Confederation.

Chief among their worries is that their slice could be far less if the yet-to-be-sold free-to-air rights are purchased by a commercial network next year for less than the $7 million a year its outgoing FTA partner SBS has been paying.

Their wariness was evident on Tuesday when the clubs’ representative organisation moved quickly to seek “immediate assurances from the FFA regarding the future distributions and associated financial models required to ensure the sustainable financial health of the league and its clubs”.

“Whilst it’s true the A-League is the commercial engine room of the game, it really needs to be thought of in the context of a broad eco-system,” Lowy said.

“The A-League will be more successful with successful national teams and grassroots.”

No matter how the pie is sliced up, a leading sports academic has called the agreement a “solid deal” in a tight sporting market.

“When this component gets added in 2017, it will likely match or exceed the 60-70 per cent ‘deal-on-deal’ increases seen in the most recent AFL and NRL broadcast scenarios,” he said. 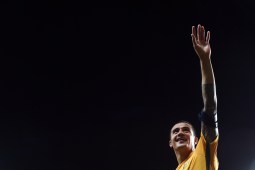 Soccer stumps up for star power under new TV deal

While soccer’s $57.6 million annual windfall – which will grow with the free-to-air deal concluded next year – falls short of the AFL’s $417 million and NRL’s 360 million, Karg said the boost would help the code grow in line with its expansion plans.

“The figures are reflective of A-League and soccer’s wider positioning; not leading the pack but certainly more than viable and growing,” he said.