Incidents abounded – during and after the 1-1 draw on Saturday night – but North’s dive was the most unsavoury.

Roar’s vice-captain clashed with City marksman Bruno Fornaroli early in the second half, falling theatrically to the turf and clutching his head after the lightest of contact from the Uruguayan.

In a statement released by the club yesterday, the Roar said North wanted to publicly acknowledge his disappointment and the unacceptability of the act.

“North is sincerely apologetic to the club, playing group and supporters for letting game-related emotions get the better of him causing an error of judgement during the match,” the statement said.

“As a club, we do not condone simulation … (and) recognise that this is an isolated incident and believe North is an excellent leader and ambassador of our club and our game.”

Breaking his silence yesterday, North – who has represented Australia 41 times for the Socceroos – told Fox Sports: “I’d like to apologise first and foremost to all the football fans out there, and secondly to everyone at the Roar — the supporters, the players, the staff and the coaching staff.”

“I also apologise to my opponent (Fornaroli), Melbourne City and everyone that was involved. It’s not a good look. People that have known me throughout my whole career know that’s not what I’d normally do,” he reportedly said.

“I just got caught up in the heat of the moment. It’s a reaction that’s well out of my character.

“I always like to play in the spirit of the game, and always have respect for my teammates and who I play against.

“I’m sure a lot of people out there are judging me as a person and as a footballer at the moment, and they by all means have the right to their own opinions. I’m sure people are having a go at me.

“That’s fine, they’ve got every right to.”

North has been heavily criticised, but he – like everyone else involved in the match – escaped sanction either by the match review panel or through a separate code of conduct charge.

Aloisi told News Corp he said sorry to Rose but he was in no mood to apologise to van ‘t Schip after the Dutchman called the senior coach a whingeing baby in the build-up to the AAMI Park clash.

“(Van ‘t Schip) had plenty of chances to say whatever he wanted to my face or my brother’s (coach John Aloisi) face the other night, but didn’t have the courage,” he said. 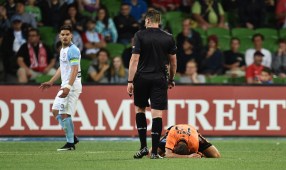 All the world's our stage (but can we stop the playacting)

“(It’s) easy to talk in the newspaper, (but) pretty hard to talk when it’s face-to-face.

In a season where three A-League coaches have already been punished for speaking out about officials, the Dutchman also avoided sanction for saying “it looked like” referee Shaun Evans was influenced by Aloisi’s pre-match comments that Fornaroli was treated too easily by whistleblowers.

In the only matter looked at by the match review panel, Western Sydney goalkeeper Jerrad Tyson had his one-match ban confirmed for a red card.