A mightily frustrating goalless draw at home to Burnley was followed by news that the Portuguese manager’s behaviour towards the officials on Saturday would not only dent his wallet but see him banned from the touchline at Swansea this weekend.

But those issues were compounded this morning, Australian time, as United failed to win a seventh straight European away match, with Fenerbahce deservedly winning 2-1 as the visitors couldn’t add to Rooney’s late stunner.

The captain’s strike saw him equal Ruud van Nistelrooy’s record as United’s all-time European top scorer, but it was too late to spur a comeback in a match that was just 65 seconds old when Moussa Sow scored with a superb overhead kick.

Zlatan Ibrahimovic was fortunate that his altercation with Simon Kjaer was missed by officials as tempers frayed, with Jeremain Lens, on loan from Sunderland, adding to United’s problems with a superb second-half free-kick.

Rooney’s wondrous 89th-minute drive led to a frantic ending, but Fenerbahce held out to secure a memorable victory that sees them usurp United in the Group A qualification spots.

Mourinho said Fenerbahce fully deserved their Europa League victory and accused his players of treating the match like a “summer friendly” at the outset.

Pulling no punches in his post-match assessment, he told BT Sport: “I think they (Fenerbahce) deserved to win, football is not just about quality, it’s about effort, commitment, playing the limits and giving everything.” 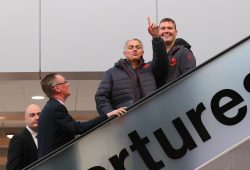 “Then they defend, then the counter-attack, then they stop the game, then they simulate free-kicks, then they put pressure on the referee’s decisions. But it’s their game, and this is our fault that we let them be in that situation.

“After their second goal we had a reaction, probably we could have got a different result but we didn’t deserve more.”

Expanding on United’s poor start, Mourinho said: “Our problem started in our global attitude. They were playing the Champions League final and we were playing a summer friendly. That is the reality of the way the game started.