Mourinho, twice sacked by Chelsea after three times winning the Premier League title, was embarrassed on his return in opposition as United imploded.

The United boss spoke at length to Conte at the final whistle, with suggestions the Portuguese had been annoyed that the Italian had encouraged the home support to cheer on the Blues when they were already 4-0 up.

Reports in Italian media said Mourinho told Conte: “You don’t celebrate like that at 4-0, you can do it at 1-0, otherwise it’s humiliating for us.”

And the self-proclaimed Special One insisted the conversation should be private, despite choosing to conduct it in front of 41,000 people and the Stamford Bridge press box.

“I speak to Conte, I don’t speak to you (the media),” Mourinho said.

“It was me and Antonio and stays with me and him. Unless he wants to share.”

Conte declined to do so.

“I’ve been a player too and I know how to behave,” Conte told Sky Italia.

“I always show great respect for everyone, including Manchester United.

“There was no incident, it was just a normal thing to do. I wasn’t mocking anyone, I wouldn’t do that.” 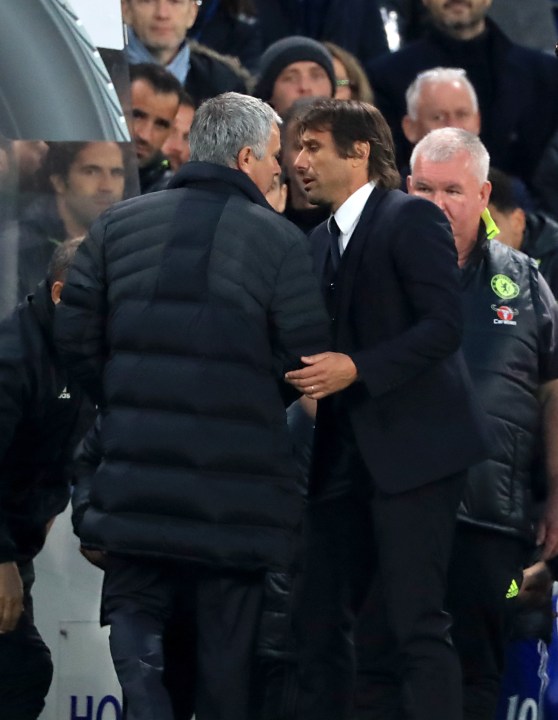 The Chelsea head coach added in his post-match press conference: “Today it was right to call our fans in a moment (when) I was listening (to) only the supporters of Manchester United, at 4-0.

“The players, after a 4-0 win, deserved a great clap. It’s very normal.

“If we want to cut the emotion we can go home and change our job.”

The Chelsea fans once derided by Mourinho, who had described playing at Stamford Bridge like playing in an empty stadium, responded.

“When you work very hard, it’s important to win. When you win you trust in your work.”

Jose Mourinho blamed “incredible defensive mistakes” for the humiliation, after United conceded the quickest goal in the Premier League this season to Pedro after 30 seconds and were then ripped apart as Gary Cahill (21), Eden Hazard (62) and N’Golo Kante (70) completed the scoring.

Most of the goals stemmed from poor defending as Chelsea found ever more ingenious ways to inflict pain on Mourinho.

“We made incredible defensive mistakes and you pay for that,” he said.

“If you score you have a chance and the match would have been different. When you come with a strategy you can’t concede a goal like that in the first minute.

“We were coming to have an offensive approach, we wanted to create chances, we showed that after the 1-0. The second and the third were counter-attack goals. If we score a goal like we almost did for 2-1 the game would be different.”

Marcus Alonso began the unravelling with a defence-splitting pass between De Gea and his central defenders that found Pedro, while Cahill could not believe his luck when the ball fell to him in the area after Chris Smalling failed to clear a corner.

“I couldn’t miss from there,” said Cahill.

Two up at half time, when United replaced Marouane Fellaini with Juan Mata, Chelsea sat back and waited to hit United on the break with Hazard adding a third after a clever one-two and then Kante driving forward to score his first goal for the club.

That goal would have particularly difficult for Mourinho to stomach because the former Leicester midfielder met so little resistance from those supposedly charged with stopping him getting into the area.

A downbeat Mourinho struggled to find a positive spin to put on a terrible result. It was only the second time in his Premier League career that one of his sides had conceded four goals.

“We need to win matches now to close the gap.”