Redlands United shocked A-League champions Adelaide United, coming from a goal down to win 2-1 in the FFA Cup last night in front of a small but heaving crowd at Brisbane’s Perry Park.

It marked the third time a semi-pro team has beaten an A-League side in the FFA Cup – Adelaide City toppled Western Sydney Wanderers two years ago, while Green Gully defeated Central Coast Mariners on Tuesday night.

The last time Adelaide took the field was in front of 50,000 spectators in last seasons grand final at Adelaide Oval, but they struggled for fluency on a cold and bumpy Perry Park pitch.

It was a low-key performance from a new-look Adelaide side, who nevertheless dominated possession for lengthy periods, and seemed in total control thanks to Ryan Kittos goal on the hour mark.

However, Redlands drew level with the last kick of regular time as United’s Socceroo goalkeeper Eugene Galekovic made a disastrous attempt to claim a through ball and Michael Lee pushed home into an empty net.

Joy for the home fans turned to disbelief as Paul O’Brian stabbed home the winner eight minutes into extra time.

Still Adelaide struggled to find any real cohesion in attack and they could do little to avoid being the second A-League club to be embarrassed within 24 hours.

Redlands boss Matt Chandler believes it’s proof there is plenty of untapped talent below the top tier, plugging away in the National Premier Leagues (NPL) – if A-League coaches care to look.

“It’s amazing, now, for Australian football that the NPL is now producing more and more teams that can compete with A-League teams in a one-off battle,” Chandler said.

“I do feel there’s a number of players in the NPL that could actually play in the A-League.

“Especially in Queensland we’re underestimated – obviously in Melbourne and NSW there’s some superb sides, but there’s a number of good sides that play in this league.

“We’re sitting fourth or fifth, that shows the depth of the league in this state.”

Chandler could barely wipe the smile off his face after the historic victory, which seemed out of the realms of all possibility when Kitto put Adelaide ahead.

Redlands had spent most of the night on the back foot, camped in defence and struggling to keep Guillermo Amor’s men at bay. 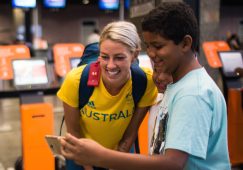 Soccer's come a long way - but what does it signify?

But Galekovic’s howler opened the door for Queensland’s second-oldest club, and Michael Lee swept into an open net to level the scores in the dying moments.

Belief grew from there.

Lee then provided the cross for Paul O’Brian, who put Redlands ahead eight minutes into extra time, and they hung on for dear life to the final whistle.

Redlands will now advance to the round of 16, and Chandler believes few teams will want to face them now.

Amor, meanwhile, said Adelaide was disappointed, but not embarrassed.

“This is football. Sometimes, it can happen – it shouldn’t happen, but sometimes it does,” he said.