“I don’t see anything wrong with the fans fighting,” Igor Lebedev, a member of both the Russian Football Union’s executive committee and the lower house of Russia’s federal assembly.

“Quite the opposite, well done lads, keep it up!”

The first weekend of the Euro 2016 tournament was overshadowed by violence in Marseille where English and Russian fans were involved in serious disorder, leading to tear gas and water cannons being deployed by French riot police.

European governing body UEFA have begun disciplinary proceedings against the Russian federation after some of their fans appeared to charge at England’s fans in the Stade Velodrome near the end of the Group B clash that ended 1-1.

UEFA have warned English and Russian officials that their teams will be sent home if the trouble continues. 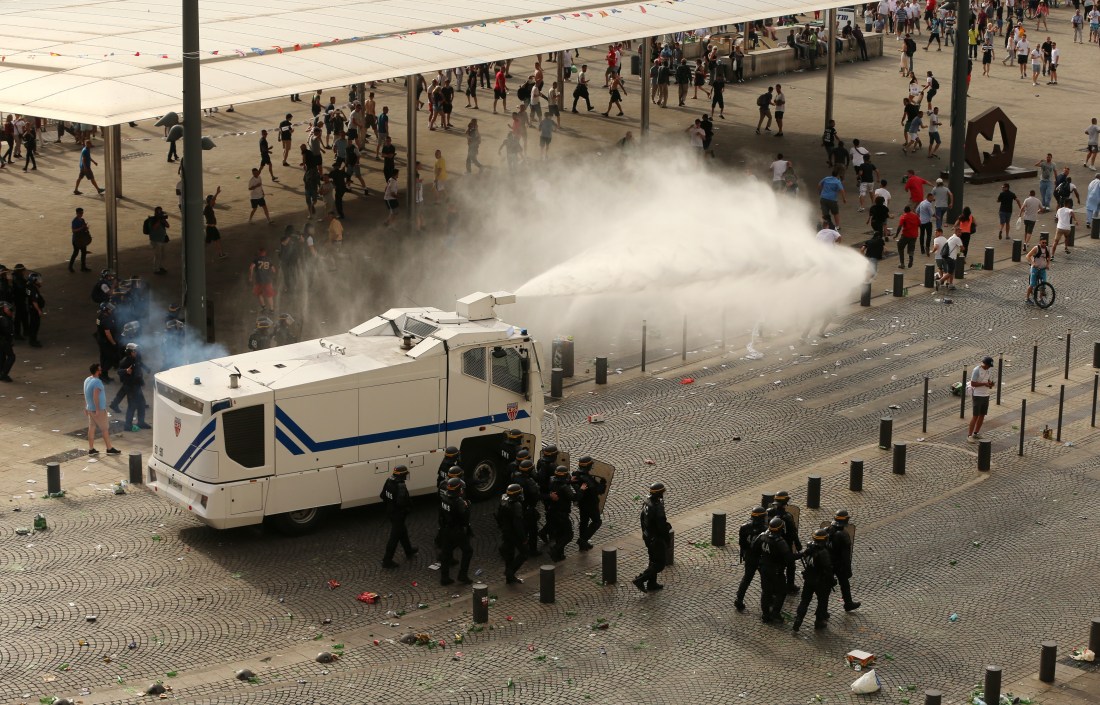 But Lebedev blamed the French authorities for the trouble that marred the game, and criticised other team officials for speaking out against their fans.

“In nine out of 10 cases, football fans go to games to fight, and that’s normal.

“The lads defended the honour of their country and did not let English fans desecrate our Motherland.

“We should forgive and understand our fans.”

The city’s chief prosecutor said some of the Russians involved in the worst of the violence had been trained to fight.

The Russian hooligans, who often refer to themselves as ‘ultras’, belong to an organised tradition of hooliganism which has its roots mainly around clubs in Moscow and St Petersburg.

They belong to “firms” modelled on what they view as the 1970s heyday of English soccer fans’ thuggery.

After Saturday’s clashes, some posted photos of themselves on social media holding stolen English supporters’ flags – some spotted with blood – as trophies.

Many are tattooed with nationalist and Orthodox Christian slogans. Some have links to white supremacist far-right groups and, at matches in Russia, have unfurled Nazi flags and taunted black players by throwing banana skins on to the pitch and making monkey sounds.

Although Russian authorities have banned the worst offenders from domestic stadiums, high-level political criticism of their behaviour has been rare.

Russian soccer fan sites were overnight awash with praise for what they portrayed as a famous victory over soft English soccer hooligans in France.

“The complete victory of our hard core in Marseille,” was how Spartak Moscow’s Fratria fan club described the clashes, linking to a video of the violence. 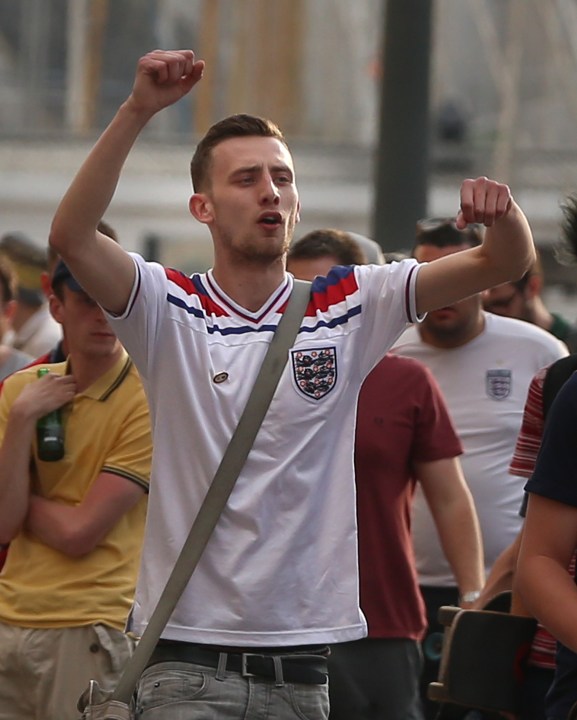 Alexander Booth, on the seafront in Marseilles, has been jailed for two months for throwing a bottle at police. Photo: Niall Carson, PA Wire.

Meanwhile, a French judge has jailed two English soccer fans for their involvement in the street violence in Marseille.

“I’m truly sorry. I was in the wrong place at the wrong time, but I’m no hooligan,” Booth told the judge before his sentence was read.

Both men will be barred from entering France for two years.

England manager Roy Hodgson and captain Wayne Rooney have appealed to fans to behave around Thursday’s Group B game against Wales after European soccer chiefs threatened to throw the country out of the tournament following three days of violence over the opening weekend.

"Be safe, be sensible and continue with your great support for the players."

In a video posted on the Football Association’s Twitter page, Hodgson and Rooney expressed their concern that further flashpoints could lead to an early end to their tournament.

“As the England manager, I am obviously now very concerned about the threat that is hanging over us and the sanction that could possibly be imposed upon the England team,” Hodgson said.

“We worked very hard to get here and we want to stay in the competition.” 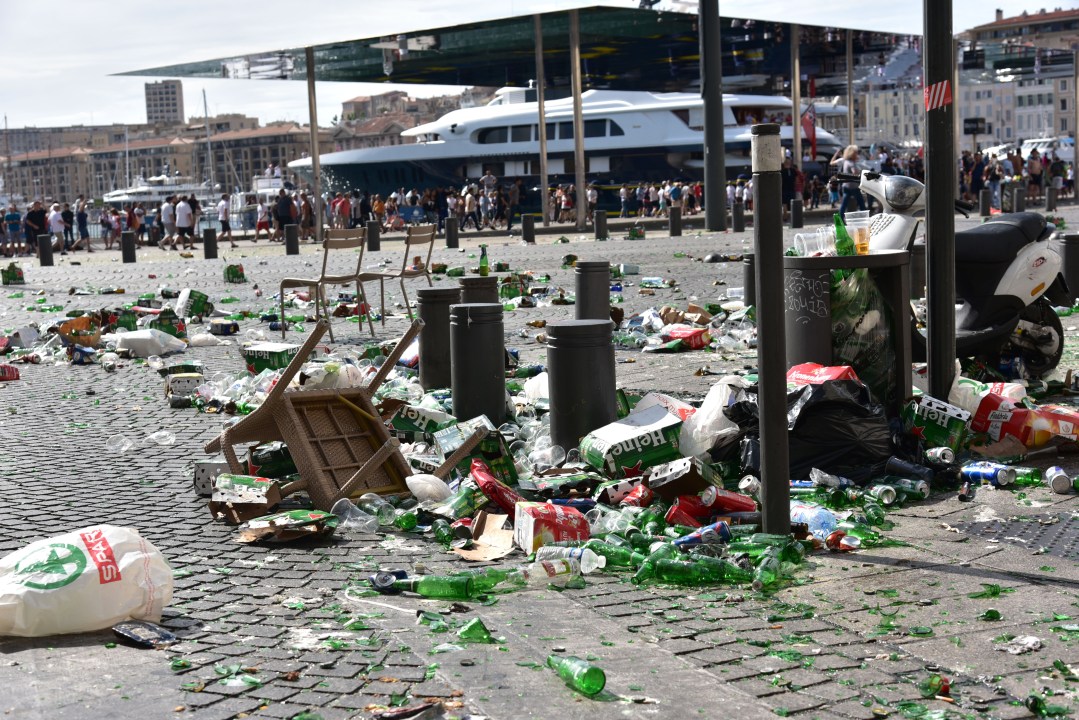 But there are fears that England and Russia fans could start fresh trouble this week. Russia play Slovakia in Lille on Wednesday, while England face Wales just 40km away in Lens on Thursday.

“I’m appealing, therefore, to all of our fans, and we appreciated your support at the matches, of course, but I’m appealing to you to stay out of trouble to try and make certain these threats are never carried out and we will be able to do the best we can to stay in the competition,” Hodgson said.

Rooney pleaded with fans to stay away from Thursday’s match against Wales unless they have tickets.

“I’d like to ask the fans: ‘Please, if you don’t have a ticket, don’t travel. And for fans with tickets: ‘Be safe, be sensible and continue with your great support for the players.'”

Welsh fans were praised for their behaviour before, during and after their 2-1 victory over Slovakia in Bordeaux on Saturday but their match against England is another potential flashpoint.

“The aggression starts on the pitch and must remain on the pitch,” Wales coach Chris Coleman said overnight. “Off the pitch there should be no aggression. Unfortunately there is a mindless minority.

“What we want from our fans is to support us in the perfect way like they did in Bordeaux.”