The timing should be perfect.

For had Sepp Blatter resigned just before the ballot that re-elected him last Friday, we would have ended up with a FIFA president who was elected by default.

That’s not a criticism of Prince Ali bin Hussein, the only other person that remained in the ballot. It’s merely recognition that others didn’t enter the race (or dropped out of it) because they felt Blatter couldn’t be defeated.

The Jordanian prince (pictured below) will carry greater authority if he wins the top job now. 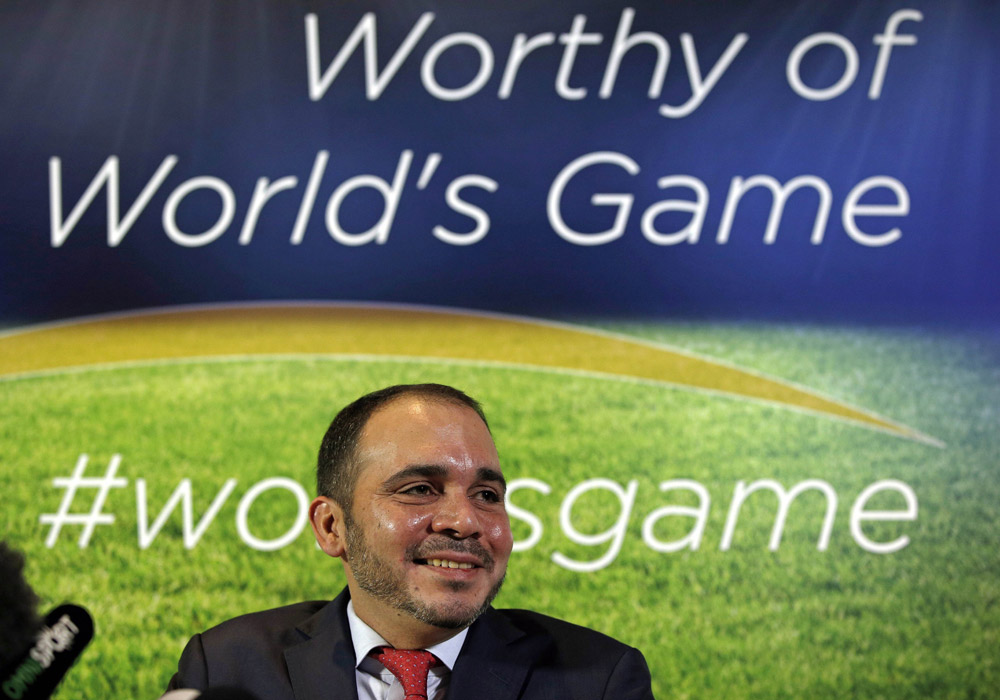 Whoever does get the job faces an almighty task. Several months ago I wrote that some members of FIFA’s executive committee make Blatter look like a choirboy. If that claim needed validation seven days ago, it certainly doesn’t now.

The next president will have to deal with more allegations, investigations and revelations. He or she might be a cleanskin with no history in any murky FIFA dealings, but the challenge will be finding satisfactory solutions.

What you’ll see now is a lot of disagreement on what change should look like. And that’s partly because you can throw people who have been clamouring for change in FIFA into two broad categories.

There are those who genuinely care about the welfare of the game and want proper governance and transparency to ensure that, as far as possible, decision makers act in the best interests of everyone that loves the sport.

But there are also plenty of hypocrites who only called for change after they played the FIFA game and lost.

(Indeed, there might be some embarrassment in England – where opposition to Blatter has been fiercest – if allegations that England colluded with South Korea in their respective bids to host the 2018 and 2022 World Cups are proven.)

If it’s the sham change agents who become beneficiaries of Blatter’s demise, there may not be genuine reform; you’ll simply have different people enjoying the spoils of being at the top of the world’s most popular game.

We can only hope that a fresh election will flush out less worthy aspirants.

In the recent campaign for the FIFA presidency, anti-Blatter hysteria was so great that there wasn’t enough focus on other candidates.

Everyone who challenged Sepp Blatter (including Luís Figo and Michael van Praag, who both eventually withdrew) promised World Cup expansion and sending more of FIFA’s cash reserves to its member associations.

I’ve said it before: that’s straight out of Blatter’s playbook. It was ensuring more World Cup places for Africa, Asia and the Americas, and sending funds to developing nations, which helped him build and maintain power.

Of course, Figo, van Praag and Prince Ali could all be highly principled guys who just made those promises because they felt there was no other way to win. There should be no excuses now.

Nevertheless, anyone would be better than Blatter, right?

No. If you think that, it’s because you don’t know much about Michel Platini, president of UEFA (Europe’s regional confederation).

Platini voted for Qatar’s bid to host the 2022 World Cup and supported moving the tournament from June/July (when it’s traditionally held) to November/December (which disrupts the big European leagues) well before that decision was made.

Not long after Qatar won the hosting rights for 2022, Platini’s son landed a job with Qatar Sports Investments.

And British newspaper The Sunday Times claimed Platini was given a Picasso painting in return for voting for Russia to host the 2018 World Cup.

Perhaps he never accepted a Picasso. And perhaps his son’s job had nothing to do with supporting Qatar’s bid.

But Platini has definitely expanded the European Championship from 16 teams to an unwieldy 24 – a Blatter-esque way of winning support among smaller countries.

(For a much deeper look into Platini, see this article written by a compatriot of his.)

Yet betting markets for the next FIFA president have already made the Frenchman the short-priced favourite. Because despite everything, when he was recently up for re-election as president of UEFA, those Europeans (who have been so aggressive in their campaign against Blatter and so outraged about Qatar) couldn’t find a single candidate to challenge Platini.

Paul Marcuccitti’s regular soccer column is published in InDaily on Mondays. He is a co-presenter of 5RTI’s Soccer on 531 program which can be heard from 11am on Saturdays.