Even against a Queensland side without more than 100 Origin games’ worth of experience.

But Andrew Fifita provided it, sparking the Blues’ record 28-4 game one win over Queensland with a man of the match effort in front of a 50,309-strong crowd.

It marked the Blues’ biggest Origin win over Queensland in Brisbane, eclipsing their 32-10 game three romp in 2005.

And it was the first time NSW had won a series opener since 2014 – the last year the Blues won the Origin trophy.

“We caught Queensland on an off night but we will take a lot of confidence out of that,” NSW coach Laurie Daley said.

The Blues were installed as bookies favourites for game one in Brisbane for the first time since 2005 – and NSW didn’t like it one bit.

The Blues still knew they would need an X-factor to defeat a Queensland side celebrating skipper Cameron Smith’s record 40th Origin.

The Cronulla enforcer was unstoppable to rack up 119m and nine tackle busts by halftime before all but sealing the result with a 55th minute try.

Fifita set up another try and ran a total of 175m to help NSW win their second game in their last 10 Origins in Queensland.

“He was unreal. I thought a couple of his carries got us on the front foot,” new NSW skipper Boyd Cordner said.

“He was enormous but he has to back it up (in game two).”

NSW also found some inspiration in the man who sparked the Blues’ last series win in 2014 – Jarryd Hayne, albeit at centre not fullback. 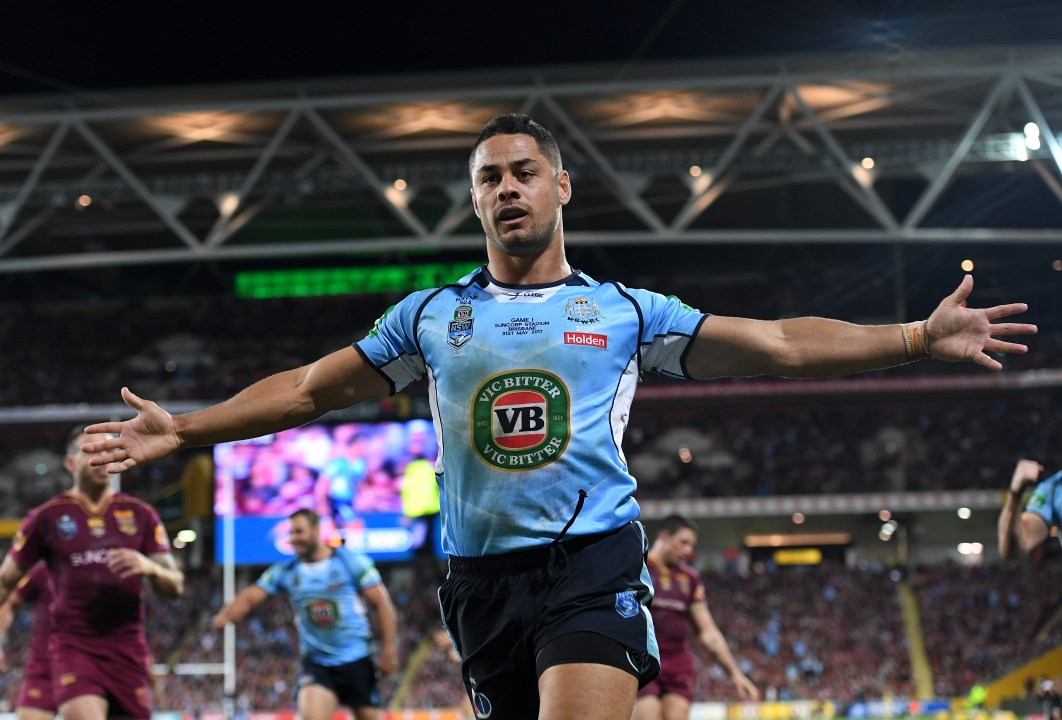 The Blues’ five tries to one win was made even more impressive considering they were without recalled NSW halfback Mitchell Pearce from the 50th minute after copping a late Will Chambers hit.

“He’s okay. Just concussion. I thought he was great. He was in control,” Daley said.

Queensland also lost Milford after he suffered concussion in the 50th minute.

“NSW just didn’t give us anything. They played Origin style footy tonight and we didn’t,” Walters said.

Fifita ran amok in the first half, running for 119m to hand NSW a 12-4 halftime lead.

Yet another Fifita bust set up Pearce’s try on halftime in a body blow to Queensland.

And he delivered the knockout punch with his 50th minute try after Queensland centre Justin O’Neill spilt the ball just metres from his own line.

Since the introduction of the three game format in 1982, the team that has won the opener has gone on to win the series 26 times out of 35 – including seven in the past eight.

Jarryd Hayne is set to end the mystery surrounding his club future today after celebrating his triumphant return to the State of Origin arena.

Making his first appearance for NSW since 2014, Hayne picked up almost right where he left off with an impressive display.

After the match, a cryptic Hayne told reporters to watch out for an announcement from his club, Gold Coast, on Thursday but refused to say what it would be.

The 29-year-old had until midnight to tell the Titans if he wants to activate his option for a second year, or if he will move to another NRL side next season.

Speaking before the deadline had passed, Hayne said: “I’ll have a couple more beers and see how we go, hey?”

“The Titans will put out an announcement tomorrow and I kind of want to give them the respect to put the announcement out, and we’ll go from there.

“Once we make the announcement I’ll go into a bit more detail.”

Hayne said he made his decision on Tuesday and that the issue was not a distraction in the lead-up to his representative comeback.

He certainly played like a man at peace with himself, contributing to the Blues’ second-half pile-on of tries with a sizzling run down the left.

“I’m pretty laid back, I wasn’t really thinking about it,” Hayne said.

Hayne looked delighted to be back playing Origin, launching into his usual ‘Hayne Plane’ try celebration and even jumping into a patch of NSW supporters in the crowd after scoring his 10th career try for the Blues.

“When I saw them it just pumped me up,” he said.

“I knew when I got close to the line how special it would be to go and celebrate with them.”