Every Saturday, 16 unlucky souls put up with me being their coach.

As I shout instructions from the sideline, I can’t help but think they’re wondering what they did to deserve me as their manager.

But even I – someone without a single coaching qualification – am aware of the most basic principles in our game, like how you should change the shape of your team when you’re reduced to ten players.

That’s why it bothers me that Carl Veart and Ross Aloisi got it so wrong against Central Coast after Joe Gauci’s early red card. 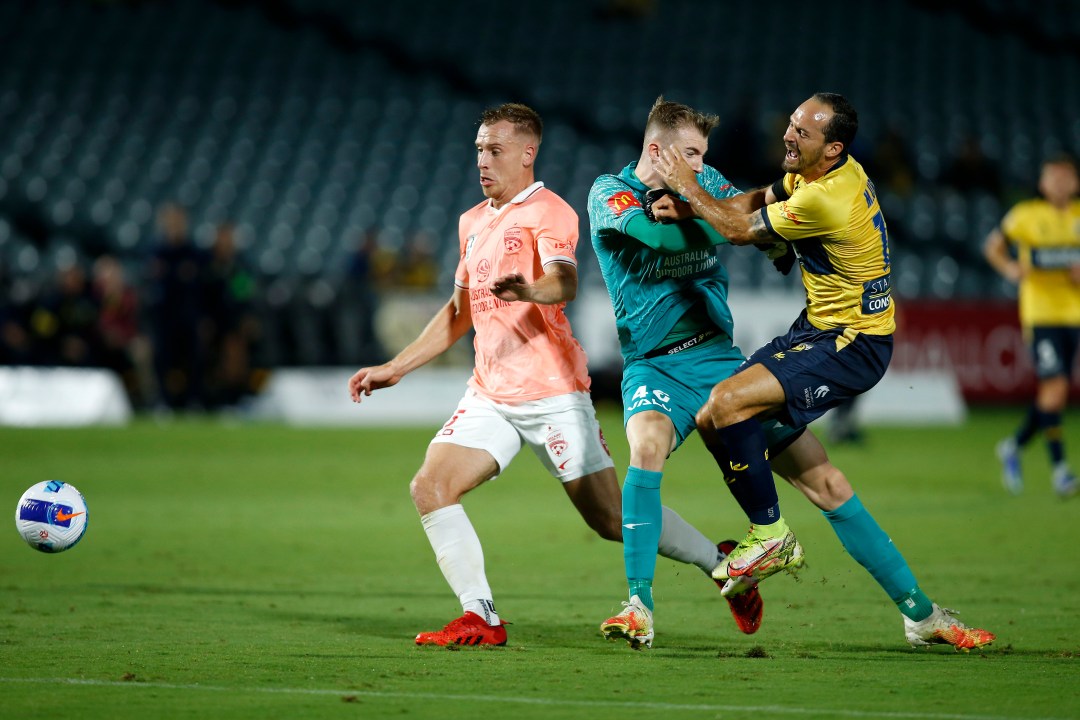 I accept it’s not easy to play a game when you’re a player short. But from where I was sitting, Veart’s tactical changes cost us a chance of a result.

Foremost, the decision to take Lachlan Brook off after Gauci’s dismissal piqued my curiosity. Adelaide has mostly played in a 4-3-3 shape all year but after the red card, United should’ve changed into a basic 4-4-1 formation with Toure playing as a traditional right midfielder, Brook on the left and either Blackwood or Clough as the lone striker.

Instead, it seemed the Reds decided to play a 4-2-3 as they moved Clough to the right wing, Blackwood stayed on the left wing and Toure was told to lead the line.

I know why you’d leave Toure up front; his explosive pace suited the counter-attacking style Adelaide needed to play if they were going to offer any kind of attacking threat for the rest of the game, but the balance of the team felt off.

Initially, Adelaide looked solid enough, despite the Mariners taking control of possession. Then in the 63rd minute, Blackwood and Toure were replaced by Goodwin and Cavallo.

Taking Toure off at this point in the match was curious. It seemed logical to leave the youngster up front for the same reason he wasn’t moved to the wing when Adelaide was reduced to 10 – his formidable pace and finishing.

Instead, Zach Clough was asked to play as a striker, Goodwin played as a right-winger and Cavallo took Blackwood’s position on the left.

After another 10 minutes, Adelaide was keeping Central Coast at bay and a point, if not a snatch-and-grab win, looked possible. At this point, I’m beginning to think my misgivings about the substitutions weren’t justified.

Veart should be under more pressure than he is. Perhaps his status as a Reds legend has meant he’s avoided the public scrutiny applied to past coaches

That’s about where it began to unravel. Juande picked up a needless yellow card for time-wasting and Veart decided to make our two final changes.

I think every United fan was expecting to see Juande’s number flash up on the substitutes board. He had just been booked, and you can’t afford to have your central midfielder walking the disciplinary tightrope in this type of match. Right? Well, apparently not.

Off came Clough and Timotheou in exchange for D’Arrigo and Caletti.

Now just let that sink in for a moment. The Reds are down to 10 players, they have no defenders on the bench due to a spate of injuries in recent weeks, and you take off Timotheou – one of only two fit, recognised central defenders.

I accept Timotheou hasn’t lived up to expectations at United and it’s clear he only played last weekend because there was literally no one else. But he and Barr looked comfortable in defence, and I didn’t feel he deserved to be taken off.

While I was nervous about the decision to shift Juande, who was on a yellow, to centre-back, I reminded myself that he had proven himself as a decent makeshift option in that position.

Except that’s not what Veart did. He kept Juande in the midfield engine room and shifted Isaias into the heart of defence. It was puzzling: a player the club itself touted as a back-up central defender remained in midfield, while our best defensive midfielder was moved to centre-back.

Central Coast quickly went on to score three goals, with Isaias looking like the proverbial ‘deer in headlights’ for the first two. I was left scratching my head as to how a coach and his assistant could get it all so wrong.

This isn’t the first time Veart’s tactics have left me (and others) puzzled. I’ve already written about the decision to play Toure as a ‘super-sub’ despite the team crying out for more flair (after that piece was published, Toure contradicted his manager and said he was fit and ready to play full games). A few weeks back, George Blackwood started against Newcastle and scored. He was then promptly benched for the next two games. These are just two recent examples.

As I’ve said before, it’s too simple to look at Adelaide’s current ladder position (third) and think the Reds are having a good season. Because, contrary to common wisdom, the table does lie.

In reality United are clinging on to finals: should Melbourne Victory, Macarthur, Wellington, Central Coast and Newcastle take a few wins from their games in hand over the Reds, they could very well be out of the top six.

United’s form has dipped right when it should be peaking. Veart should be under more pressure than he is. Perhaps his status as a Reds legend has meant he’s avoided the public scrutiny applied to past coaches.

But as we build up to Saturday’s derby against the Victory, a loss or a draw would mean four games without a win and questions need to be asked about Veart’s suitability to continue leading the team.

Based on the season so far, especially the last month, it wouldn’t be an unfair conversation to have.