Adelaide United’s performance against the Victory was in stark contrast to what they dished up a few days earlier against Perth. It was an impressive performance from a team who had been so very average against the Glory.

The Reds outplayed the Victorians for much of the game. In fact, the game could have been sewn up by half-time, if multiple half-chances had been converted.

All the plaudits have been for young Mohamed Toure who, at 16, is showing abilities well and truly beyond his years.

He has people in awe of his pace, physicality and skills – a perfect mix. He also seems to be just as adept on his right foot as he is with his left.

But much of what went right for Adelaide on Saturday night is due to two players who probably won’t get many mentions this week.

Louis D’Arrigo and Joe Caletti worked as hard as anyone on the pitch.

They frustrated the Melbourne midfield with their continual ability to intercept passes, make vital tackles and distribute the ball well when they had possession.

A special mention also goes to Ryan Kitto who was impressive in his return to the team.

It’s been a very pleasing start to the season (the Perth game aside).

But the reality is Adelaide will face better teams than the last-placed Victory this season, and they will need to perform better than they have been.

His assistant is Steve Kean. Kean is a former manager of Blackburn Rovers in England and you would therefore assume someone with vast experience.

The reality is that Kean was a disaster at Rovers.

He was catapulted to the top job from nowhere after the mind-boggling sacking of Sam Allardyce (who had made Blackburn a competitive Premier League team) by the then-new club owners Venkys.

His time in charge at Rovers was littered with poor results, player revolts, public gaffes and finally, relegation.

Therefore, Adelaide must reflect honestly on the game and realise that despite the win and many impressive passages of play, they gave Melbourne multiple chances to score and, quite possibly, previous Victory teams would’ve made the Reds pay.

Rudy Gestede’s header hit the post, Elvis Kamsoba blasted a shot straight at Delianov and Marco Rojas took a heavy touch when clear through on goals.

And while the Reds are going well, and fans should be happy with results, they cannot become complacent as there is still room for improvement.

Against Melbourne City and Western United, for example, Adelaide were second best for long patches.

They were totally dismantled by Perth.

The Reds have to work hard every game. If they snooze, they will suffer the same fate as they did against Perth.

Carl Veart is an astute mentor – as shown by his tactical reshuffle against the Victory.

But in the end, he’s not out on the field kicking the ball.

The A-League is a very competitive league with a high level of soccer being played, despite what many critics would have you believe.

And, as such, the players must keep pushing themselves in every match if they want to continue winning.

This Saturday’s match against the Roar will prove a much sterner test and maybe we will see exactly where United is. 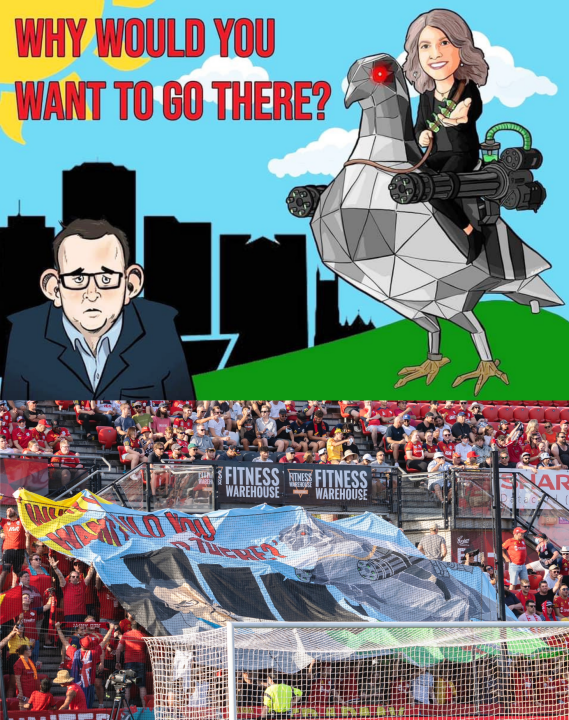 The tifo design and its unfurling at the game. Source: Red Army and Adelaide United

Tifo-rrific. That’s the only word I have to describe the excellent tifo unveiled by the Red Army at the Victory game.

It’s not often a banner gets people talking but whoever came up with the idea is an early contender for South Australian of the year.

The tifo displayed Victoria’s Premier Daniel Andrews below his infamous “why would you want to go there” quip about South Australia.

Behind him was our Chief Public Health Officer Nicola Spurrier, riding the Gawler Place pigeon with a vaccine-loaded machine gun and a bandolier filled with hand sanitiser.

Also, we had our first example of safe smoke being used. I’m not an advocate of flares at games but the use of safe smoke was a great touch and one that I would love to see again.