There is an infamous quote that goes around in soccer circles.

“You can’t win anything with kids”, uttered ex-Liverpool star Alan Hansen when discussing Manchester United’s title hopes at the start of the 1995/96 Premier League season.

Of course, that Manchester United team was loaded with young superstars who, subsequently, went on to claim the title.

Adelaide United’s focus on young talent (primarily from South Australia) has pleased the majority of its fans.

But it is true that young players can be inconsistent, and the United “kids” will need to show their worth if the Reds are going to add trophies to their cabinet.

Let’s take a closer look at the questions surrounding this year’s squad.

Adelaide United has always had talented goalkeepers (with the exception of Robert Bajic who, when he wasn’t kicking Fred or spitting the dummy, looked like he was swatting flies).

All three have now departed and the biggest question is whether Adelaide has recruited solid replacements.

(For the record, Izzo is yet to save a ball in anger in the Greek second division. The competition hasn’t even started.)

The first choice appears to be James Delianov.

The former Melbourne City shot stopper was recommended by one of Adelaide United’s greatest ever: Eugene Galekovic.

Galekovic, now a coach at United, played with Delianov at City.

On the face of it, it’s hard to argue that Galekovic doesn’t know a good goalkeeper when he sees one.

But truth be told, Delianov has very little experience at the top level in Australia and it will be a test for him to step up from perennial reserve to number one.

Behind him are Joe Gauci and Dakota Ochsenham. Both appear to be very talented players, but we are yet to see either of them paying regularly at a high level and are unknown quantities.

Without a goalkeeper who’s able to stop the ball hitting the back of the net, the Reds will struggle irrespective of how well the rest of the team performs.

Someone much wiser than me once made the point that finding a capable left back is arguably the hardest job a coach has in football.

Michael Maria was recruited to play their last season but struggled defensively.

Ryan Kitto has performed admirably in that position when asked to do so. It seems logical that he becomes United’s long-term left-back.

But again, Kitto is naturally an attacking player and can be caught out defensively.

Another option is George Timotheou, who despite being a centre back, is left-footed and could slot into that important role.

The more extreme possibility is Ryan Strain. He could play as an inverted wingback, something made famous by Pep Guardiola at Manchester City, cutting in from the left wing when the Reds attack. This would allow either Michael Marrone or Javi López to play right back.

The only problem with this is that Ben Halloran would need to move to the right wing as it would cause a lot of congestion if both Halloran and Strain were cutting inside. You would need a left-footed winger to create space for Strain to move into. The only option would be Kitto in that role.

It will be very interesting to see who lines up at left-back come 6:45pm Monday.

No Troisi, no ten?

James Troisi’s departure has left a huge hole in the vital number 10 role – it’s impossible to argue any other way.

Carl Veart has already stated publicly that new captain Steven Mauk will play in that position.

Whilst Mauk is a very capable footballer, he’s more suited to a box-to-box role rather than a creative role.

We saw how effective he was as a box-to-box player in his first spell with the Reds.

If Adelaide decides not to recruit a replacement for Troisi, there will be a lot of pressure on Mauk to perform. He’s already got a lot on his plate being named captain, so it will be interesting to see how he copes with his new playing position.

The Toures are no longer an unknown quantity in Australian soccer.

Opposition players will be ready them. The media and fans will scrutinise them.

The youngsters seem to have a level head, but will they be able to cope with expectation – especially if they do not find the form which brought them both national attention last season?

The other question is how does Veart accommodate both of these highly talented players in his team?

Al Hassan is obviously a striker but right now is behind Tomi Juric in the starting line-up.

Mohamed is able to play anywhere across the front three and also in the number 10 role, though it would seem very unlikely that he would replace Ben Halloran, Stefan Mauk or Juric in the starting line-up.

That leaves the right-wing position as the only place that the brothers could slot in to.

But it would seem, based on what we saw in the hub at the end of last season, that position is Pacifque’s to lose.

Right now, Al Hassan and Mohamed both look likely to be starting on the bench.

Son of a gun

Does Dom Costanzo find a place in this team?

The son of former Adelaide United defender Angelo was brilliant in the NPL this year; so-much-so he made the team of the year.

But he may have to bide his time and wait for an opportunity to present itself before getting into the team on a regular basis.

Adelaide is not short of young and/or talented attacking players but it will be curious to see how far up the pecking order Costanzo actually is.

There’s only one person whose opinion really matters on this front, and that’s Veart.

A best 11 is always subjective. Here’s mine: 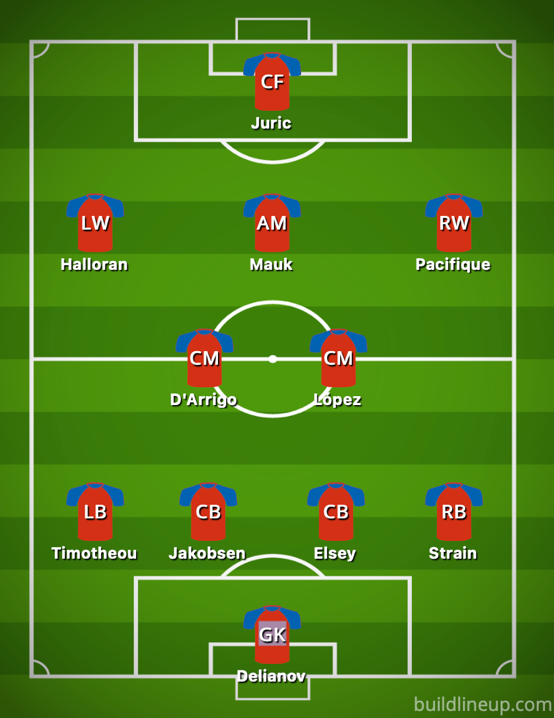 Does Adelaide have depth?

Constanzo, Caletti, Yengi, Konstandopoulos, Smith, Dukuly and the Toures. These young men will need to step-up should Adelaide have an injury crisis or regulars don’t find form.

Konstandopoulos and Caletti have played enough at A-League level to know the ins and outs of the league. The Toures also have some experience.

The others are still finding their way but will need to be ready when the chances come their way.

Should Adelaide need to reach deep into its roster, it may struggle whilst the young brigade adjusts to senior football.

Can Adelaide win the Premiership or Championship?

Losing Troisi puts a dent in the title hopes but, should things go well, Adelaide should be in the mix.

If injuries, bad form or suspensions hit, then it may be too much to expect the youngsters to carry the team.

It’s great to have football back.

A reminder to all members and fans that ticketing arrangements have changed for home matches for the foreseeable future.

Owing to COVID-19, everyone in the stadium must have an allocated seat, with capacity at Hindmarsh capped at 75 percent.