Over a charcoal barbeque on Sunday night, my friend and I got to talking about the A-League.

Well it is back from its hiatus, but there’s every chance you didn’t know that.

I’m not going to bash Greg O’Rourke – the FFA’s Head of Leagues.

I feel some measure of sympathy for him. It cannot be easy to try and get this season sorted after the shutdown.

Around 3:30pm on Monday, we finally got some clarity around the remaining fixtures.

Up until that moment, we weren’t sure if Thursday night’s restart would go ahead.

Melbourne Victory, now under the tutelage of Grant Brebner (their third manager for the season), was scheduled to face Western United.

But, the Victorian teams need to quarantine for 14 days after entering New South Wales with an official exemption from that State’s Government.

Now, New South Wales is having an COVID outbreak of its own, and there’s talk all teams will be re-located to Queensland.

Anyway, back to the barbeque.

My friend, who is a more recent convert to Adelaide United, but as passionate as anyone I know, asked me how I felt about the season re-starting.

It’s a question I’ve been asking myself for a few weeks.

And while I’m excited to see Adelaide United and furthermore, how they play under the tutelage of Carl Veart, my head tells me it would have made more sense to draw a line under this season and just focus on getting everything right for next season.

It made perfect sense to make Sydney FC premiers and declare there wouldn’t be a champion this season.

And for the purposes of Asian Champions League qualification (if indeed that competition will even go ahead), the A-League could very well have nominated Sydney FC (as premiers) and Adelaide United (as cup champions) as two of the representatives.

It’s easy to say these things from afar without being across all the machinations and the behind-the-scenes argy-bargy.

But is there any true benefit to seeing this season out?

I understand perfectly that the AFL and NRL had to get things going again – they were at the start of their respective seasons.

But for the A-League, just how vital was it to recommence?

Most fans would have respected a decision to wrap this season up.

Unfortunately, the shutdown has accentuated that Australian soccer is (again) at a difficult juncture in its existence.

The FFA have released its XI Principles discussion paper in the hope of re-aligning the game and is consulting with the public.

A move to winter seems imminent and that, in my opinion, will represent a slow death (we’ve tried it before folks, and it didn’t work).

And for those who are wondering why Optus Sports haven’t made a play for the rights to the A-League, it’s worth noting that the new Optus boss is Kelly Bayer Rosmarin.

Rosmarin resigned from her role on the FFA board in late 2019. Insiders said she wasn’t happy with the lack of transparency about the Olyroos incident in Cambodia.

But, it has also been muted that she was not popular with club powerbrokers, who are taking charge of the A-League… eventually.

I try really hard not be a doomsayer but it’s not easy to ignore the warning signs.

The abovementioned Hill, who many believe to be the voice of soccer in Australia, has penned this excellent article about the state of the game and the continuous errors that have been made.

I do disagree with Hill’s stance on the Lowy family’s continuation in the FFA boardroom in 2015.

Sometimes when I close my eyes, I can see Frank and Steven Lowy, sitting in front of a log fire, drinking a fine cognac and repeating Steven’s words when he announced his departure:

“To those who are tired of the debate and wish for an outbreak of peace so that the game can get on with life, I say: be very careful what you wish for.”

It’s a very lukewarm feeling of anticipation that has occasionally surfaced in my subconscious about the A-League’s resumption.

Nevertheless, when all is said and done, I will be watching. And I hope you are too.

His logo won the U-Design-It challenge run by Adelaide United.

To no-one’s surprise, the fans also favoured it over the existing logo.

Well, we lost. So we’re changing our profile pics for 24 hours to @BenjaminHampel‘s U-Design-It winner.

But here are a few variations open for discussion… pic.twitter.com/GrqkfqVxWF

“Adelaide United will not be changing its logo as a result of the U-Design-It Challenge but it has opened up for an interesting discussion,” a spokesperson for United told InDaily.

I’m no fan of the piping shrike but I seem to be in the minority.

I voted for every logo that didn’t have the bird in it, even the one below, which I assume is a representation of the Festival Theatre or possibly the flagship from Starchaser – the Legend of Orin: 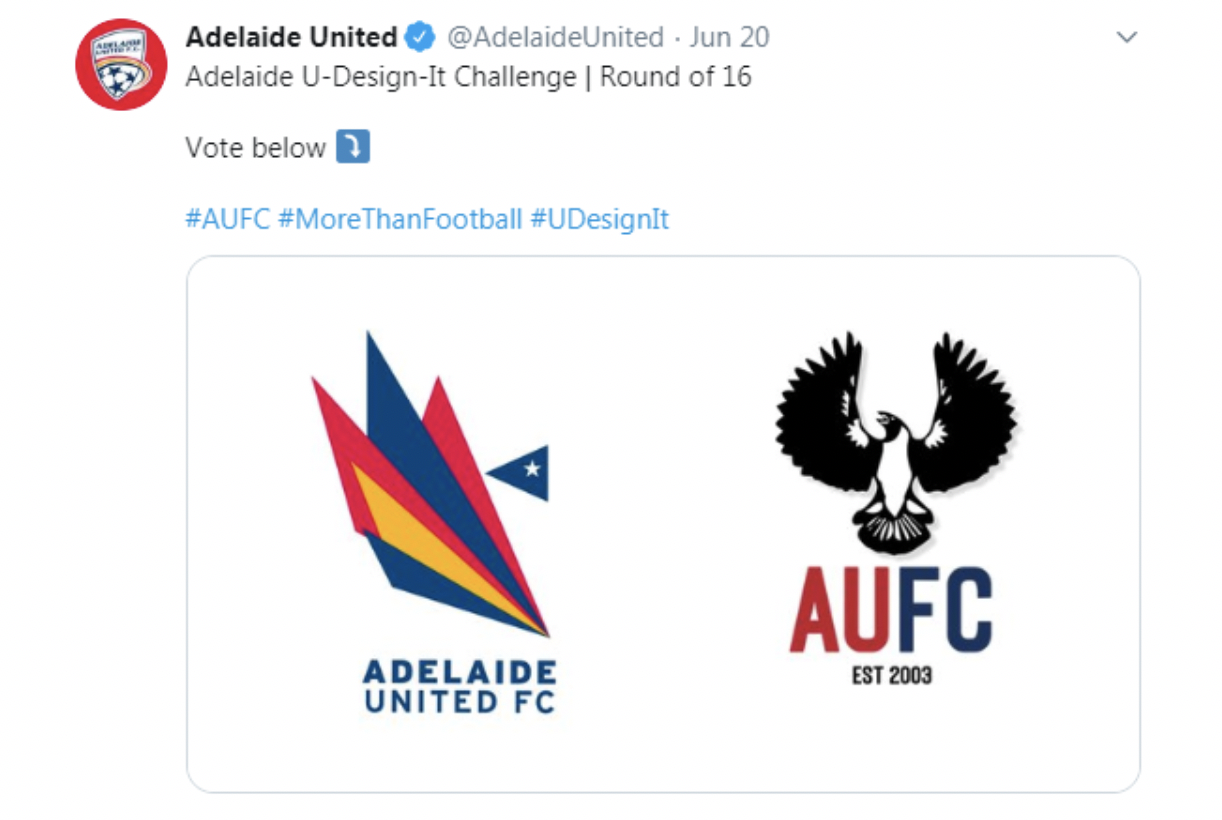 Even fans of other A-League teams are saying that Hampel’s logo is the way forward.

If in the future United decide to change things up, and it was a choice of the four Hampel variations, I don’t mind the plain red version.

And one more thing…

Dakota Ochsenham has signed a contract with the Reds until the end of the 20/21 season.

The young keeper started the season as fourth choice.

But with Daniel Marguš departing for pastures new, and Isaac Richards changing careers, he is now Paul Izzo’s deputy.

Izzo was involved a serious car accident recently. He’s returned to training but it will be interesting to see if he is selected for Adelaide’s game against the Fowler-less Roar.

If Izzo isn’t ready, Ochsenham will play. That will make him the seventh player from Adelaide United’s youth team to debut this season.