You can lead a horse to water but you can’t make it drink. And it seems, when it comes to Marco Kurz, some people refuse to end their aridity.

You see, it just doesn’t matter how much information they get about Marco Kurz, they believe he should still be coaching the Reds.

The German’s tenure at Melbourne Victory was ended last week, after just 13 games.

This brought out the “he should still be at Adelaide United” fan club, despite some scathing allegations about how he went about things at Victory.

For Adelaide United’s part, the Kurz era is well and truly done and dusted.

Owner Piet van Der Pol made some public comments at the member’s forum a few months ago but you’re hard-pressed to get anything more from United about Kurz and his time at the club.

They’re done with it.

Melbourne Victory have not been so schtum about his short-lived tenure.

Victory chairman Anthony Di Pietro’s public comments about the reason for Kurz’s departure centred around concern about Kurz’s tactics and included a mea culpa about appointing him at all.

The day after Kurz was dumped, this article appeared on the Herald Sun and it was cutting in its assessment of the German.

It’s hard to ignore some of the revelations in it particularly about things within the inner sanctum at Victory.

It will resonate with Reds’ fans about some of the things we know happened here at United.

One thing I don’t agree with is the statement of Victory “not doing their homework” on Kurz. They spoke to three people associated with Adelaide United during the recruitment process. In their own way, they all said: “don’t do it.”

The Victory did it anyway and here we are.

Despite this, some fans simply won’t accept what is known. For example: 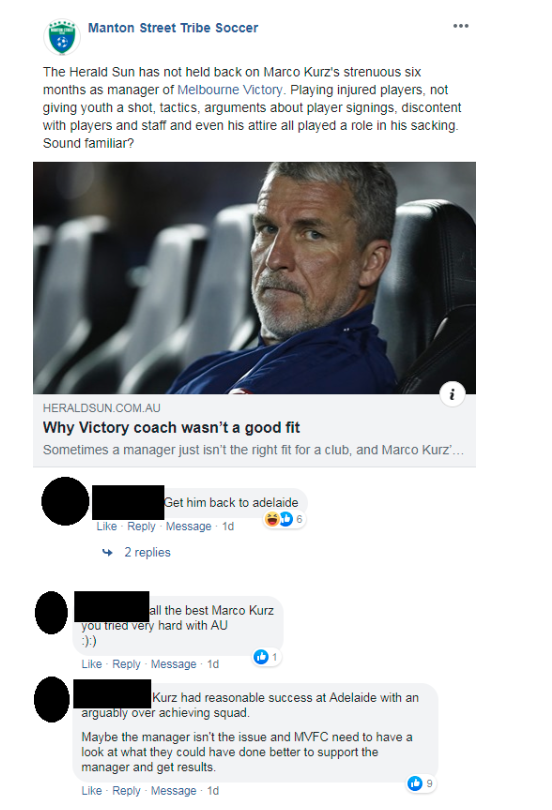 I get it: fans want results and Kurz did get them at United.

You can play the game in many different ways and get wins. Kurz prefers a pragmatic approach and that’s fine.

However, United’s concerns seemed to be more about “employee” Kurz than “coach” Kurz.

Adelaide United, for the fans, is a sporting team that we love and are passionate about. They provide us with an escape. We live and breathe every game.

And some fans will even say that a sporting club is different from any other place – that workplace issues can be tolerated, as long as things are going well on-field.

I can’t agree with that. For the players and staff at the Reds, the club is their workplace.

What evidence do we have about the Kurz’s performance as an employee and a manager of other employees?

Kristian Konstandopoulos ended his two-year stint as a senior Adelaide player at the end of the 2018/19 season.

Last week he spoke to Purebred Reds – Adelaide United Fan TV about his time at the club and detailed his frustrations as a player under Kurz.

“It was tough because I think Marco just wanted to win and … he didn’t believe the young players could do so as much,” he said.

“He played some young players but, especially in the second year, it was more like ‘okay, I’m just going to win games and do what I need to do to win games’ and it was like maybe you should give the young guys a chance as well, they can show something?

“It was frustrating for me because I never just got the opportunity to show myself.”

Konstandopoulos, who’s signed for Adelaide Olympic for the upcoming SA NPL season, went on to explain the disconnect between the senior team and the youth team was particularly “weird”.

He elaborated that both teams played a different style of football and weren’t on the same page about tactics. This meant players like him, who trained with the first team but played mainly with the youth team, found it hard to know what to do.

This was a point reiterated by Bruce Djite who said at the aforementioned forum that he couldn’t believe how separated the youth team was from the senior team and that the players in the youth team didn’t even feel part of Adelaide United’s set-up.

Maybe we need to be reminded about what Taylor Regan said on Twitter about his former mentor.

“As a fan I can definitely understand all the frustration, as I agree, Marco can coach,” wrote the current Selangor FA captain.

“But I also had the chance to see things from the inside. Sometimes there is more to football than just what the fans see. I’m staying on the fence with this one.”

Rob Cornthwaite, who did not play under Kurz, wrote the following on his Twitter:

“Kurtz (sic) while at Adelaide United used the same recovery session and recovery measurement implemented at Bayern,” he said.

“Players often running large distances the day after a game in the hot Australian sun.

Van der Pol and the Adelaide United executive could very well have had egg on their face of Kurz had led the team to a Grand Final last season.

Making managerial changes would have been a much harder sell if that had been the case.

But sometimes, for the greater good, the hard decision needs to be made.

There were minimal ejections in the southern stand (where I sit) and I want to credit fans, security and police for being on the same page when it came to spectator conduct.

There was a lot of the usual banter and back-and-forth with the away fans but when things escalated, it was quickly brought under control and there seemed to be a lot more tolerance from police and security.

This made for a great atmosphere.

More of this please.