Despite Old Mate’s best effort to dismantle the hype, the season has finally arrived. 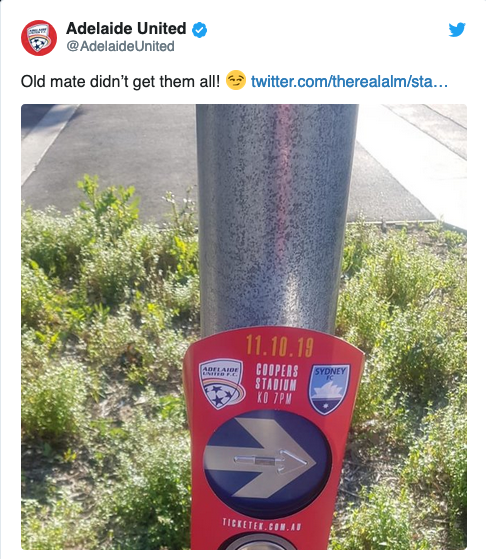 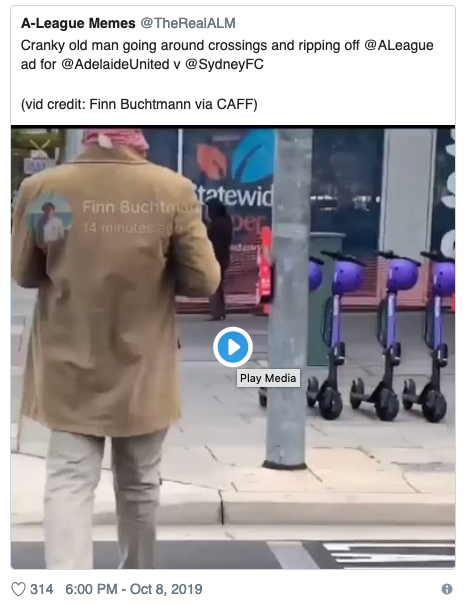 It’s been a long, long wait for the A-League to return and we haven’t exactly seen a media blitz in the lead up.

Clubs have been trying hard to ramp up the rhetoric on social media this last two weeks – it seems to have had a small effect.

The best promotion of the off-season was run by parody social media account A League Memes, which offered a season ticket to a fan who got their club to post an A League-themed gif.

The clubs got in on the act and it was a huge success.

Adelaide United then awarded a season ticket to one of their fans (who didn’t win the overall prize).

Even Hyundai – the league’s principle sponsor – got in on the fun.

A family member asked me yesterday when the new season started.

He got a season ticket from his daughter for Father’s Day.

So it’s been a slow burn.

We’ve only just found out that there won’t be a sixth foreigner this year.

We also now know clubs will be able to have seven substitutes if they want them.

Adelaide will only have five tonight. Why, you ask?

Well, the official communication confirming the seven subs rule was circulated yesterday at about 10:20am Adelaide time, and Verbeek had already decided on his squad of 16.

I am an advocate for seven substitutes and it seemed like a simple decision, but I would hazard a guess the delay would have been around the expense of taking additional players to away games.

But letting teams know the day before the opening fixture – that’s peak A-League.

Honestly, is there any other way?

And deep down, despite your frustrations at the lack of promotion, despite your misgivings about unbalanced scheduling and a season starting on an international weekend – meaning some teams will be missing some of their best players – you know you wouldn’t have it any other way.

There’s much to look forward to:

See, the season is already a winner and a ball hasn’t been kicked in anger yet!

Adelaide United will be there, or thereabouts, this season.

Verbeek hilariously stated in his press conference yesterday that there was no pressure on Adelaide to succeed as soccer experts had tipped them to finish seventh – a subtle dig at Robbie Slater’s predictions this week.

(Gertjan, for the record: Andy Harper thinks Adelaide will be champions.)

The Reds have recruited well, supplemented nicely with the signing of the abovementioned Troisi last week.

Their squad currently has 23 players, with one more to arrive soon from China – a defender – which will probably end Adelaide’s transfer business.

Tonight’s season opener will be a good indication of just how competitive Adelaide will be.

Sydney will be showcasing their latest signings: Baumjohann, McGowan, Barbarouses and Brattan, but will be missing Redmayne and Grant who are with the Socceroos.

Verbeek suggested Al Hassan Toure could start tonight, but also said he saw Blackwood as a ‘10’ (something, to be fair, Blackwood himself has said in the past) and not a ‘9’.

So, the interest will be around if those two and Opseth start, or whether Mileusnic – who was superb when he came on against Central Coast in the FFA Cup – regains his place in the team.

It’s unique, it’s special, it’s infuriating but it’s ours – it’s great to have the A-League back.