SKM: Congratulations on the new role – how’s the first week been?

BD: Extremely busy, but very enjoyable. My phone has never run so hot – I’ve never received so many calls or messages since it was announced.

I’ve managed to get back to everyone that’s tried making contact with me and that obviously includes a lot of agents and players as well.

I doubt my phone will be subject to this level of activity in the future, however it was so nice and really humbling to hear from so many people how well the announcement last week had been received.

How was your first chat with new coach Gertjan Verbeek?

It was really good, actually, and he was very relaxed.

We spoke very briefly about what recruits we need and he’s looking forward to coming to Adelaide and is very excited for the season ahead.

Gertjan wants to see the boys and put them through their paces for a few weeks, and then, after he’s assessed the group more closely, we’ll be looking to ramp up recruiting of the necessary players we need to complement the core of the squad that we have retained from last season.

The chat was enough to get a good understanding of what we’re both about, what’s required for the season going forward, and talk about the club in general terms.

You’ve said publicly that the owners intend to spend more money than ever before. Is this just on the playing roster or across the whole football department?

It will be across everything.

Costs rise every year and if you want to be competitive in a league that’s getting more and more unequal, you have to be prepared to continually increase your spend.

The Collective Bargaining Agreement (CBA) just got extended for another year with some slight tweaks and you see how Sydney FC’s used that to get Kosta Barbarouses in and keep him in the salary cap.

The league and the structure of the CBA, especially in terms of player payments and wages, does allow quite a lot of flexibility.

We still have the same challenges, just at a slightly different scale.

We’re never going to be one of the biggest-spending clubs in the league, but to try and keep up with those bigger clubs and bigger spenders, we’re going to have to incrementally spend more year on year.

With 16 senior spots filled (plus three scholarship contracts), Adelaide can sign up to seven senior players. Will the club do that, or is it about quality over quantity?

Considering we have kept the core of the squad that performed exceptionally well last season, it’s definitely quality over quantity.

We don’t need numbers and we’re not going to just sign people for the sake of signing them.

We probably need three or four really quality players to complement what we already have to have a stronger squad than last season.

That’ll come in the shape of foreigners and local talent. We have already begun talking to Australian players and we’re starting to canvass some foreign options, who we believe can come and strengthen the squad.

The club is not in an absolute rebuilding phase like Wellington Phoenix or Brisbane Roar who need to bring in 14 or 15 players and basically start again.

We have a very strong core and we’re looking to make some good, strategic signings.

What positions are you looking to fill and have you started that process?

The shortlist is there and the positions we need are no secret to anyone.

The club’s needed a number nine for a number of years and we need a number 10 as well.

There’s a few positions there that’ll be taken up by foreigners.

We’re confident that we will be able to bring in, not only good players, but good characters who have the strong mental, emotional, technical, and tactical attributes that we need.

It’s a complicated puzzle and getting all these jigsaw pieces in the right place is tricky, but it is a challenge, which we’re comfortable with and confident in executing. 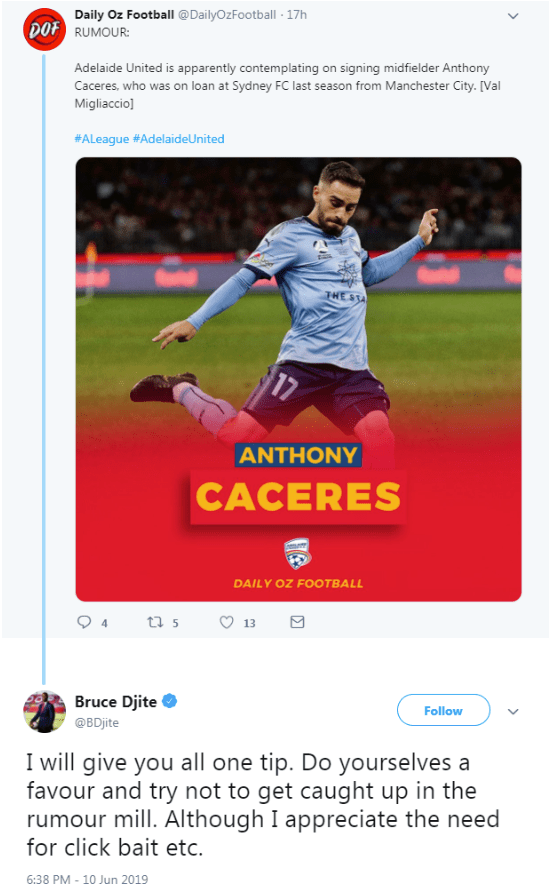 Djite has shown a strong willingness to communicate with fans over social media.

With three international spots available, will it be a team effort to fill those? In other words, will you, Verbeek and the chairman get together and tap into the contacts and resources you have?

It will definitely be a collaborative effort.

I don’t believe in any unilateral approach to player recruitment.

At the end of the day, as a football director, you’re running the whole football department and with that come multiple responsibilities.

So too the head coach, because it’s his or her job to get the best out of each individual player as well as the team as a whole.

Therefore Gertjan deserves and will have a say on player signings because he will be working with the playing group every day.

I think it’s crucial to have everyone rowing in the same direction, so as I said earlier, there will be collaboration around any signings.

What type of import are you looking to attract – a big name for a season or someone who will stay for a few years and create a legacy?

Ideally, all your contracted players want to stay for the foreseeable future and want to be remembered by the fans. Whether you want to call it ‘a legacy’ or not is up to you.

They need to have a desire to positively impact the club and contribute to what we’re trying to achieve here.

I think that’s up to the individual player, but the players that we’re looking for are players that have the right attributes, not just physically, technically, and/or tactically, but also the mental side of the game.

We know it’s not always possible to get every signing absolutely right, but that’s the aim.

Ideally, we want to sign people that are prepared to stay for the medium to long-term and, as long as they are performing, they should be rewarded with contract extensions or longer-term deals.

We’re after quality players, who are not necessarily big, household name players – players with footballing qualities over marketing qualities.

In part two of the interview tomorrow, Djite discusses the importance of reconnecting with local clubs, the women’s football program and his rallying call to fans.