You remember the National Soccer League, don’t you?

Some of my fondest memories growing up are sitting in the outer at Hindmarsh Stadium with my late father watching West Adelaide play.

On reflection, the NSL was much like that weird relative that you see at family events.

Growing up, you think they’re cool and fun to hang around. But once you hit maturity, you realise that they are still living at home with their parents and they never bring food or presents to gatherings. They’re not going to ever amount to anything, irrespective of how many times the family tries to bail them out of trouble or push them in a new direction.

The NSL finally died in 2004. It had been coming after years lurching from one crisis to another.

If you can stomach it (and maybe understand how far we’ve come in such a short time), go check out the Death to the NSL twitter account. (Okay, I’ll admit, there are some great memories on that feed as well).

After the West Adelaide Sharks folded in 1999, I never thought I would have another team to support in Australia’s top tier. There was no way I could support Adelaide City – they were our biggest rivals and I just wasn’t able to do it, though I know of a few who did.

Then, in late 2003, all that changed. Adelaide United was born. The rest is history.

It is often forgotten that Adelaide United played one season in the NSL. United, along with Perth Glory, were the only two teams to transition to the newly formed A-League in 2005.

Though, I can’t help and wonder if keeping the name Football Kingz may have been a better option for the New Zealand A-League entrant.

Kings. With a zed. Amazing.

(Disclaimer: to be fair, the Kingz did want to play as the Kings, but were threatened with legal action by basketball franchise Sydney Kings).

The Reds had a great season in 03/04, finishing the minor round in third place. Only Paramatta Power team featuring Lucas Pantelis and Travis Dodd (second, 11 points ahead) and Perth Glory (first, 17 points ahead) were better teams. 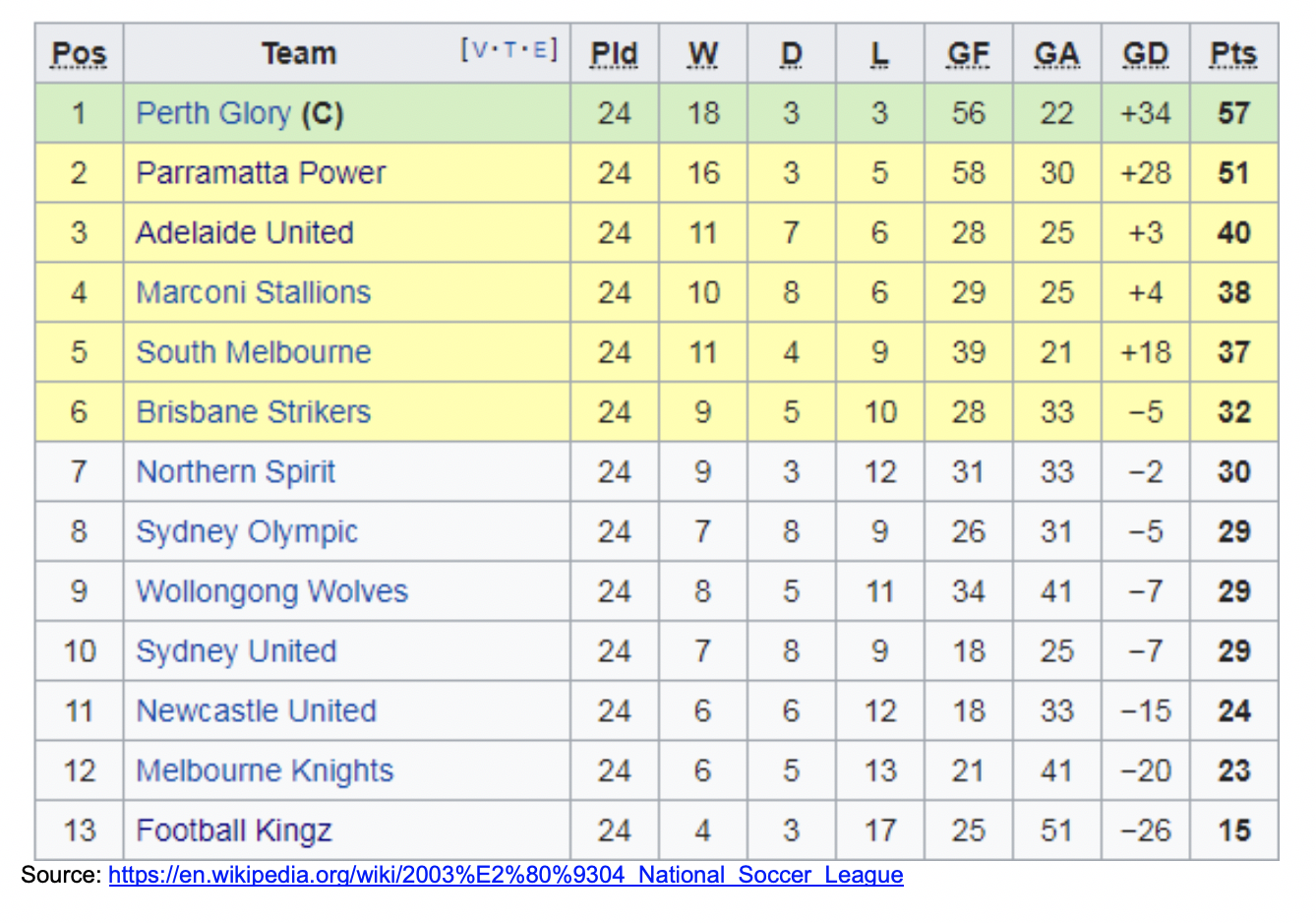 Adelaide finished fourth and 16 points behind the Glory this season.

Heading into 03/04 finals series, United were considered an outside chance to claim the Championship.

It all started well enough: a 3-0 home win against the Brisbane Strikers in the first leg of the elimination final highlighted by a thunderous Freddy Agius goal. But it almost unravelled. Adelaide lost 4-1 in Queensland but snuck through on away goals.

Next, the Reds played South Melbourne at Hindmarsh in a one-legged semi-final (because nothing was easy in the NSL). This game is still very fondly remembered by United fans.

On the team list for South that day were Eugene Galekovic, Vince Lia and United’s now general manager of football Ante Kovacevic. South took an early lead through Michael Curcija and was looking solid until Sam Poutakidis was controversially sent off on the stroke of half time.

Adelaide equalised through Ross Aloisi and then won in extra-time when Richie Alagich almost broke the net converting a penalty.

The Reds progressed and set-up a preliminary final against Perth, in Perth.

Is this all sounding a little familiar? Well, I hope, this is where the similarities end.

John Kosmina’s team were huge underdogs heading into the game but I remember feeling mildly optimistic that I would be travelling to Parramatta for a grand final the following week.

If I can just pause here:

Adelaide was torn apart by the Glory. Bobby Despotovski started the scoring in the 10th minute and the Glory never looked back.

The highlight for Adelaide fans? Kosmina being caught by an effects microphone calling one of his players “chicken shit”.

Adelaide lost 5-0 and Perth went on to win the grand final and claim the Championship/Premiership double.

The task before this current squad of Reds is not much easier. Under the guidance of Tony Popovic, Perth has been the standout team this season, playing attractive soccer and thoroughly deserved their Premiership.

But the A-League finals series is essentially a cup competition and, as Adelaide has already shown this season, it has a real liking for this format.

Revenge for that loss 14 years ago is definitely a possibility this week and, if Adelaide does win, it will either face Melbourne Victory or Sydney FC for the Championship in Victoria or New South Wales.

And while we are talking about revenge: wouldn’t it be nice to play the Victory and bury some of those demons as well?

Spiro Karanikos-Mimis is co-host of Soccer on 531, which can be heard Saturdays from 9am and 11am on Radio Italiana 531am.