It may seem odd to suggest that a publication that has just rolled off the press is indispensable.

But it’s hard to imagine that any Australian soccer fan could believe that a collection of must-have books would be complete without Andrew Howe’s Encyclopedia of Socceroos.

Howe – who lives here in Adelaide and works as a demographer for the Australian Bureau of Statistics – is the only person who could have put it together.

He is the creator of the official list of players that have represented Australia in A internationals (i.e. matches between FIFA-affiliated associations in which selection of eligible players can’t be restricted).

You might think that all the relevant records would live in filing cabinets at Football Federation Australia’s headquarters. They don’t.

Indeed, it was FFA that turned to Howe – the governing body’s honorary statistician since 1999 – to ensure that it had definitive lists of A international matches and players that could be used to award caps.

Not surprisingly, the task took several years to complete. Australia played its first international in 1922. To get results and lineups from the national team’s earliest years meant digging through old newspaper reports (which didn’t always provide clear information).

Matters would have been complicated by all the non-A internationals. From the beginning, Australia played many matches against club sides and the chaps who only represented our country in those games can’t be capped (fortunately, however, there is recognition of those players in the Encyclopedia).

The tiniest error by Howe, particularly in the difficult task of drawing information from the national team’s early years, could have thrown the list of Socceroos into disarray.

But, as he writes himself, “a large part of a statistician’s workload is checking, double-checking and triple-checking their work”.

Still, undertaking the task required more than expertise; it couldn’t have been done without great dedication to the game. And while Howe is quietly-spoken and modest, he is incredibly passionate about soccer.

In my most recent conversation with him, we talked about the grand final of the 1991-92 National Soccer League season, played at Melbourne’s old Olympic Park Stadium. I was at the game but there’s nothing surprising about that as Adelaide City was playing.

But it is remarkable that Sydney-born Howe was also there. He was living in Canberra at the time and went as a neutral fan.

The official attendance that day was 15,463. It’s hard to imagine that there was more than a handful of spectators who had travelled from other states without being either officials, media or fans of one of the competing clubs.

Come Saturday morning, Howe will be contributing to grassroots soccer by doing a spot of refereeing.

It’s been pleasing to see that, in the short time since copies of the Encyclopedia began circulating, the mainstream media columns about it have focussed as much (if not more) on Howe than the publication itself.

That’s not what he would have intended but the recognition is well deserved – you can’t overstate his contribution to Australian soccer.

Moreover, though Howe researched and wrote an entry for each of the nearly 600 men who played in at least one A international for Australia, the work also defines him. The numbers, records, facts and maps are statistical paradise, but Howe has said that they’re also an important part of telling a story. He might have also been described as a historian before the Encyclopedia was published; there is no doubt now.

We also see the influence of Howe’s professional life through charts and maps in the appendices.

What an education! I didn’t know there was a town called Cloncurry, never mind that Kasey Wehrman (cap 438) was born there.

Yes, among other things, Howe has found the Socceroos’ birthplaces and clubs they played for (some of which no longer exist). It would be a shame if you never knew that one of Queensland’s great teams in the 1920s – when Australia was playing its first internationals – was called Pineapple Rovers.

Though the Encyclopedia of Socceroos has been more than 20 years in the making, there is no time for the author to rest. Next year he intends to publish a similar Encyclopedia for the Matildas in the lead up to the Women’s World Cup.

I’m certain Howe has also worked out that the 100th anniversary of Australia’s first international will fall in the lead up to the 2022 FIFA World Cup finals – surely the perfect time for the next edition of the Socceroos’ work.

Until then, he’ll continue producing official season guides for both the A-League and W-League, as well as occasionally taking to Twitter to give us random stats such as how six “Ms” (Mark, Massimo, Mathew, Mile, Milos, Mitchell) started for the Socceroos against Iraq last year and the “last time >6 same 1st letters started was 1957 (Jack X2, John X2, Joe X2, Jim)”.

It should be enough that the Encyclopedia tells us something about every Socceroo. But readers will learn (and work out) even more. Such as our record in matches against Mexico, who the first player to wear the green and gold while on the books of a European club was, and the identity of the man who’s coached the Socceroos in more A internationals than anyone else (which might surprise a few people). 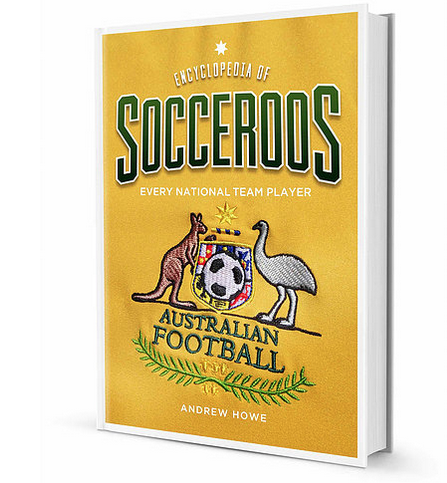 Many of these statistics and records do exactly what the author intends – help tell the extraordinary history of Australian soccer.

The Encyclopedia of Socceroos is both an outstanding achievement and, thanks to Andrew Howe, it’s something that we can all enjoy.

And we’re incredibly grateful. Just yesterday, he sent me a message telling me that one of the people who provided material for the Encyclopedia drove him from Sydney to Newcastle and back for an event to launch the book (a six-hour roundtrip). Howe added that, “the support from people like him is overwhelming”.

But Howe shouldn’t be surprised. If he is, it’s because he sees his work as a labour a love and doesn’t realise what a gift it is to the rest of us.

The Adelaide launch of Encyclopedia of Socceroos will be held at 5.30pm on Wednesday, June 6 at Adelaide City FC, corner of Fosters Road and Hilltop Drive, Oakden. Entry is free and tickets are available at: https://www.fairplaypublishing.com.au/events/adelaide-launch-encyclopedia-of-socceroos

There will be some copies to buy at the launch for $65. It can also be purchased at: https://www.fairplaypublishing.com.au/product-page/encyclopedia-of-socceroos