Do you fancy a sporting event which involves balls but has no one keeping score?

Where, rather than gasp in awe at the skills of the participants, you can see you’d do a better job?

And there’s plenty of glamour but it’s brought to you with the type of cringeworthiness that you’d expect from the Eurovision Song Contest?

If so, be prepared to have a late one on Friday night because the Final Draw for the 2018 FIFA World Cup is the event you’ve been waiting for.

Oh, and if you’re a fan of the game or have statistical/nerd interests (or both), add another star.

For many people interested in knowing how the eight groups of four will look in next year’s big tournament, including finding out who Australia will face, it’ll be enough to wake up to the news the next morning.

But where’s the fun in that? Particularly when you have all the caffeine necessary to keep you going to the 1.30am start and you can pretend that your two year-old won’t wake you before 6.00am.

On that front, there’s good news and bad news. The good news is that the draw only takes around 20 minutes (and seems even quicker). But the bad news is that, before that, you’ll probably sit through 90 minutes of … err… entertainment.

I haven’t checked out what’s planned for Friday night’s extravaganza in Moscow’s State Kremlin Palace but, if previous editions are anything to go by, I can guess!

Old World Cup footage, of course, but it will probably be presented in a cheesy way (for Germany 2006, a ball was kicked from the stage and it became the narrator).

A clip of kids smiling while kicking a ball on a South American beach followed by a group doing the same on a dusty field in Africa and then another few on an ancient street in a hilly European town? A must.

At some point the home nation will show you how amazing it is and even the least salubrious host city in Russia (whichever one that is) will be presented as a major tourist destination.

There will be singers and dancers; maybe even an illusionist.

Eventually famous ex-players will come on to the stage and they’re likely to be asked unpredictable questions like “What did playing in the World Cup mean to you?”.

But they will perform the draw. Standing behind giant glass bowls with what look like little soccer balls inside them, they will awkwardly stir the balls before picking one out at a time (usually in a clumsy enough way to remind you that their main skill in life was playing). The little ball is then opened and it will contain a piece of paper with a country’s name on it. 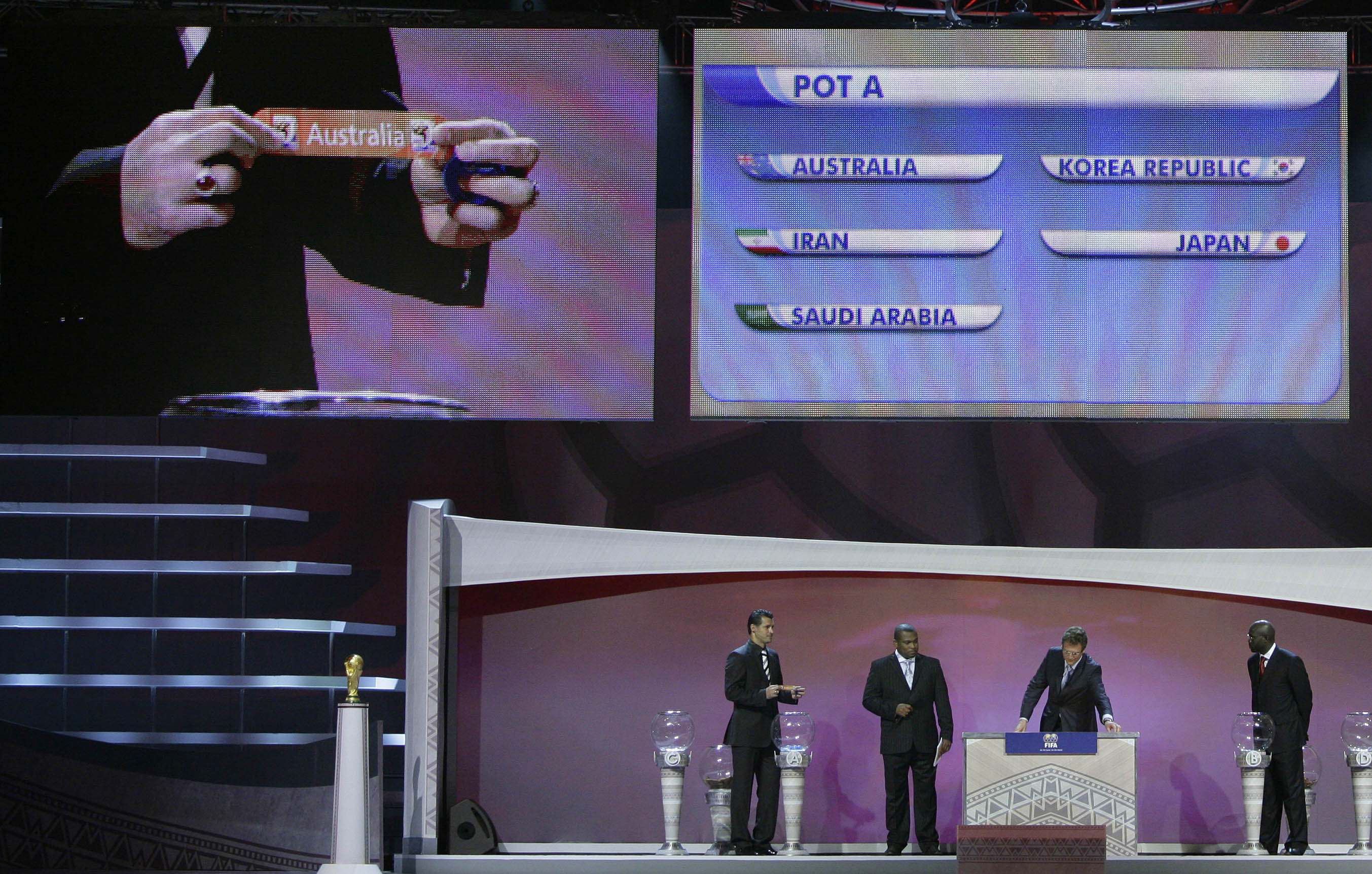 Australia is drawn from the pot during the Asia zone draw for the 2010 World Cup in South Africa. Photo: Odd Andersen / AP

Still, the draw itself is worth waiting for. All the above-mentioned nonsense aside, it is the moment that the World Cup transitions away from continental competition.

The 2018 FIFA World Cup began on 12 March 2015 with qualifiers in our own Asian confederation. They were the first of 871 matches that have featured 208 countries.

Of those countries, 177 have been eliminated and that leaves 31 that will join Russia at the World Cup’s next stage – the finals.

And Friday night’s Final Draw goes a long way to helping us see how the 64 matches in June and July might unfold: both the group phase and the subsequent knockout matches.

For example, let’s say you think Germany and Brazil are the two best teams in the world and wonder whether they might meet in the final.

Here in Australia, we’ll be happy to get whatever gives us the best chance of making it to the round of 16 (as the Socceroos of 2006 did).

It won’t be easy and a change for this year’s draw will ensure that weaker teams in the tournament are even less likely to face Australia in the group stage.

In the past FIFA hasn’t bothered using what it calls “sporting principles” for the draw, except that eight of the 32 teams would be seeded. The other 24 were organised geographically to ensure that each group would have no more than one country from each confederation (apart from Europe where numbers dictate that most groups will have two of its teams).

The result would invariably be one or two really strong groups, and one or two weak ones.

For 2014, Australia found itself drawn with Spain (ranked 1 in the world at the time), Netherlands (8) and Chile (12). Had the principles that will be applied for Friday night been in use four years ago, Netherlands and Chile would have been in the same pot, meaning that they couldn’t be in the same group. 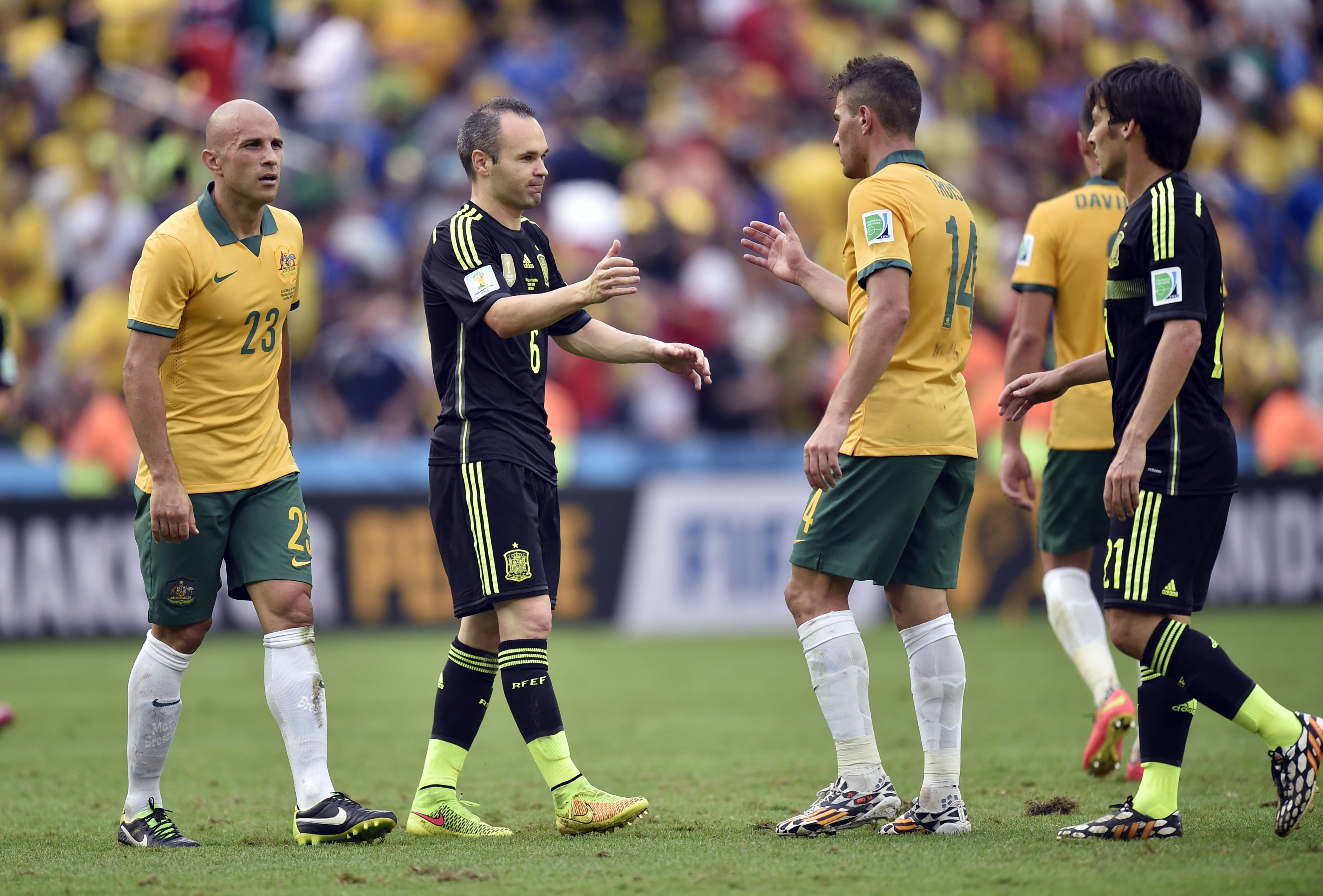 Now all four pots are organised according to rankings. But FIFA will continue to keep geographic balance in the groups and that’s going to make the draw a little more complicated than normal.

These are the four pots with Pot 1 being the strongest, Pot 2 being the next strongest and so on.

You could say that the toughest possible combination would be a group of Germany, Spain, Denmark and Serbia while the weakest would be France, Croatia, Iran and Saudi Arabia.

The likely way around this is that if drawing a team in a particularly group would break the continental balance FIFA strives for, it will be moved to the next available one.

Example: Pot 1 is likely to be drawn first, then 2, 3 and 4. If Group A has Russia and Spain, and a European team is the first one to come out of Pot 3, it won’t go to A and will instead be moved to the first group that doesn’t already have two European teams. It could be Group E because it’s possible that all the groups from A to D have already reached the limit.

On rankings – and probably in reality – the toughest group would be Brazil, Spain, Denmark, Nigeria (because if you take Germany from Pot 1 and Spain from 2, you can’t have Denmark or Iceland from Pot 3 or Serbia from Pot 4).

And here’s the bad news. A group of Brazil-Spain-Denmark-Australia is possible. Nowhere to hide there.

But I doubt that would be the weakest group in reality. We’ve talked before about flaws in the FIFA rankings and I’d be surprised if many observers think Croatia is the weakest team in Pot 2. If I could choose an opponent from it, I’d take Mexico.

The elephant in the room which (as far as I can see) hasn’t been pointed out in Australia while we’re going through this bizarre post-Postecoglou lovefest, is that the Socceroos really could have been in Pot 3. Iran made it there and, as it’s a fellow Asian confederation team, it has the same barriers and opportunities.

The Iranians just kept winning matches in qualifying and the Socceroos didn’t. It’s as simple as that.

Their reward might be getting Panama out of Pot 4 (and given that Panama narrowly finished ahead of Honduras in qualifying – and we saw how poor the Hondurans were – that would present a golden opportunity). There is a decent chance of that happening too because Iran can’t get drawn with any of the bottom pot’s Asian teams – Australia, Japan, South Korea or Saudi Arabia.

The scary part for us is that, because our pot will probably get drawn last, we’ll already know which groups we’d rather not be in. And if you do see Brazil-Spain-Denmark or similar, you’re going to at least take a deep breath when the Pot 4 team for that group is about to be revealed.

When it’s all done, we have six months to predict/imagine what the results in all these groups will be and even how the knockout rounds will go (on the basis that we’ll get all the outcomes right of course).

Whatever you think the ideal group for Australia would be, the outcome surely couldn’t be worse than it was four years ago.

And you don’t want to wait to find out. Or miss this show.