Both in the battle with Honduras and in the gap between the first leg and the second.

I’m pretty experienced in dealing with this agonising period. But still not particularly good at doing so.

Back in 2005, when the second leg of the Uruguay-Australia qualifiers was also played at Stadium Australia on a Wednesday night (a few days after the first match in Montevideo), I decided to fly to Sydney on the Monday morning.

I’m still not quite sure why I did that. But it’s possible I thought that it’d be easier to switch off from pregame hype in less familiar surroundings.

And if, like me, you bleed green and gold, will be crushed if Wednesday night doesn’t go our way, and you’re finding your anxiety levels rising every time you see another discussion about Ange’s future, Timmy’s ankle or what qualifying/not qualifying means for our game, here’s the best piece of advice you’re going to get: switch off.

Yes, just switch off. And re-engage on Wednesday evening.

You can do it safely because most of the babble between now and then will be irrelevant.

Sure, there might be the odd bit of genuine news, perhaps a top player being ruled out after sustaining an injury in training. But it’s mostly tomorrow’s fish and chip paper (or at least it would have been once).

Even the more high-brow tactical discussions are largely a waste of time.

Tactics are obviously important but, if there’s one thing I can assure people who weren’t following Socceroos’ qualification attempts in the pre-2006 era when we regularly had to go through these playoffs, it’s this: they’ll be decided by moments.

Unless there’s a gulf in class between the two competing teams in matches like these, the outcome will probably come down to whether a couple of chances to score are taken, or a penalty decision, or an offside call.

This may all sound odd coming from me given that I engage in these discussions and want more (and better) soccer coverage in Australia.

But all these conversations have reached a logical end in this qualification campaign. On Thursday, new ones will begin – if you can bear them.

So if you need a break from all the chatter, take one (after you finish reading here of course!). 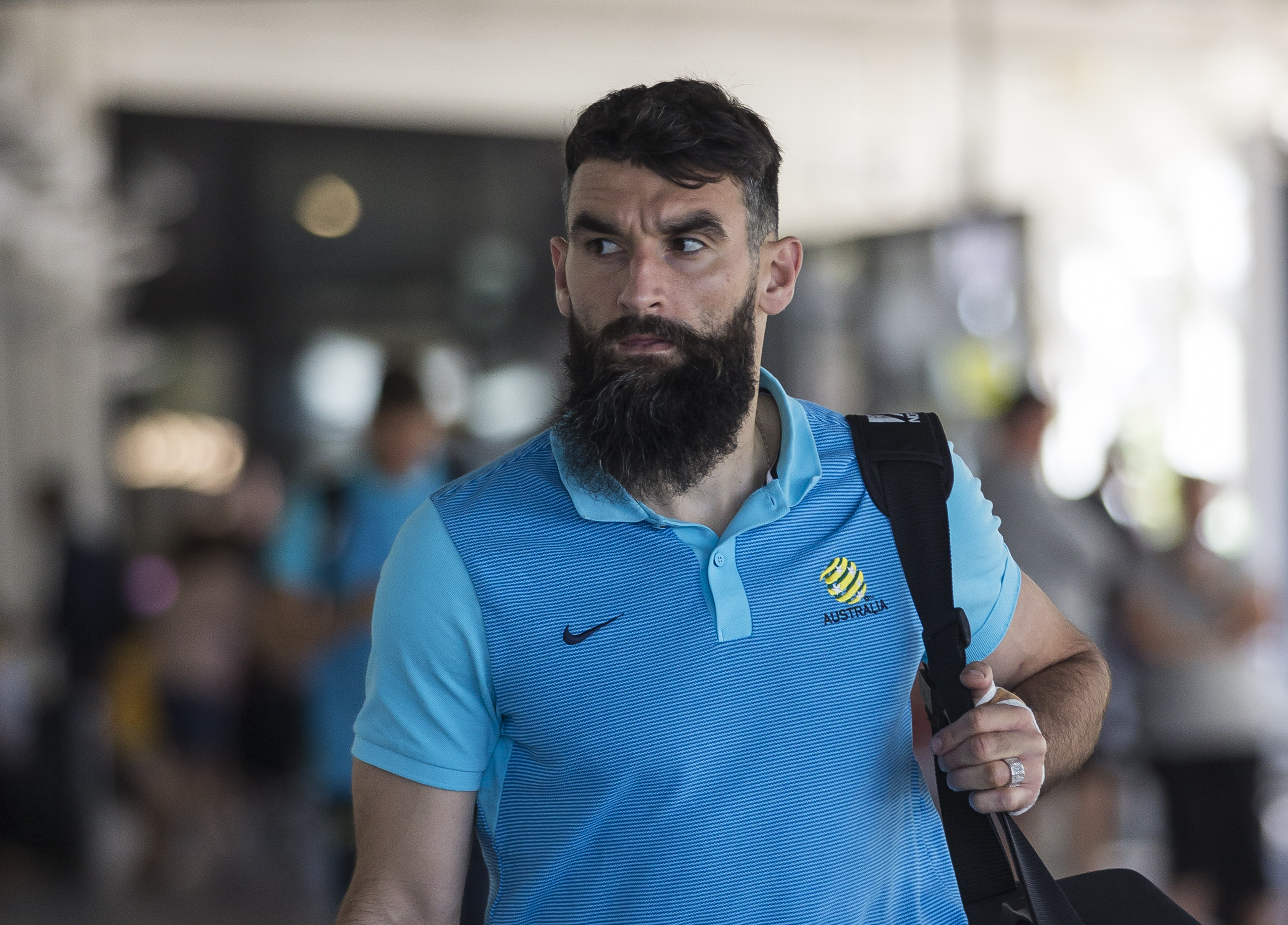 It is possible that either Australia or Honduras will dominate Wednesday night’s match, waltz to a 3-0 or 4-0 win, and we won’t be on the edge of our seats in the closing minutes.

But it’s more likely that we’ll see a match similar to the ones we were accustomed to in intercontinental qualification playoffs in the 1990s and early 2000s. For a guide, here are the results in those games:

There are several takeaways from those results but the one I want to focus on is that in three of those five ties, both nations scored the same number of goals.

Which leaves the ’93 tie against Argentina, decided by just one goal, and the ’01 playoffs against Uruguay, decided by two.

Also, to emphasise that these encounters tend to be close unless there’s a huge difference in class between the two teams, note that in 1993, Australia’s overall result against Argentina was just one goal worse than it had been against Canada.

And, while I don’t wish to recall every moment in those matches which underlines the point – that one or two incidents could well decide the outcome on Wednesday night – there are several which are worth mentioning.

One of the reasons why an Australian side good enough to compete with Argentina in 1993 only squeezed past Canada a few months earlier was because a few of those little episodes went against the Socceroos in North America.

Less than 15 minutes into the match in Canada (with the Socceroos playing in their memorable spew top) the ball struck the referee’s feet as Ned Zelić was bringing it forward. The deflection went straight to a Canadian opponent who was immediately able to play it to a teammate moving toward goal. Aussie ‘keeper Robert Zabica rushed out, fouled the forward outside the penalty area, and was red carded.

With an extra player, the Canadians would win 2-1 but both their goals resulted from shots which were blocked but then rebounded kindly.

The return match in Sydney saw a dominant Australia hit the post and force several good saves before Frank Farina finally made it 1-0 with a bicycle kick just before half time.

Then the Canadian ‘keeper Craig Forrest could easily have been sent off. After picking the ball out of the net, he threw it as hard as he could at the celebrating Aussie players and missed by centimetres.

Canada managed to reply in the second half and retake the overall advantage but, with Australia just 13 minutes from elimination, defender Mehmet Duraković, possibly the outfield player least likely to trouble the scorers, converted a header to make the aggregate score 3-3. The Socceroos won the penalty shootout thanks to the heroics of a young mullet-haired goalkeeper playing in just his second international: Mark Schwarzer. It really shouldn’t have been so close.

A lot of Australians point to the Argentine goal in the second match (in Buenos Aires) which took the cruellest deflection off Alex Tobin’s leg, looped over Zabica, and in to the back of the net.

But that goal really wasn’t relevant in the end because, as the first match in Sydney ended 1-1, the Socceroos had to score in Argentina (the away goals rule meant that even a 0-0 draw would see Australia eliminated). They didn’t.

The goal that proved decisive was Argentina’s in the opening game. In the first half, Socceroos midfielder Paul Wade managed to stop Diego Maradona surging down the sideline and the ball broke to Milan Ivanović.

The normally impeccable Ivanović (seriously, the guy made about one mistake a year) took a heavy touch and Maradona won the ball back and crossed for striker Abel Balbo who scored.

On to my least favourite Socceroos subject: Australia v Iran at the MCG, 29 November 1997. Goodness, even thinking about it 20 years later is distressing.

Again, there are myths around this game. The main one is that Australia’s momentum was killed by serial pest Peter Hore who ran on to the field in the second half, damaged one of the goal nets, and caused a delay of around five minutes.

But the Socceroos’ dominance of the game, which they were leading 2-0 before Hore’s intervention, continued for another 15-20 minutes.

With the first leg in Tehran finishing 1-1, a 2-2 draw would see Iran through (on away goals) but, until the last 20 minutes, the visitors looked incapable of scoring one, never mind two. And Australia should have been out of sight; many chances had been squandered.

Then a few mad minutes turned the playoff around. And a decision – in fact, a non-decision – by the match officials helped Iran’s comeback. The build up to the visitors’ first goal included a clear offside. It was missed and a few minutes later, the score was 2-2. With no further goals, our dreams were shattered in the most heartbreaking way.

The 2001 series looks the most one-sided with Uruguay winning 3-1 on aggregate.

But although the Socceroos were outplayed for a lot of the second leg (in Montevideo), they were in the tie until the dying minutes.

That’s because Australia carried a 1-0 advantage from the home leg and a goal in Uruguay would have forced La Celeste to score three.

And the Socceroos nearly did get an away goal that could have decided the playoff in their favour. They were particularly good in the first 20 minutes of the second half (at 1-0 down) and Josip Skoko, Harry Kewell and Mark Viduka all went close.

Even after Uruguay took a 2-0 lead in the 70th minute (2-1 on aggregate), one goal would have tipped things back Australia’s way. Defender Shaun Murphy was nearly the unlikely hero and forced a sharp save out of Uruguay’s ‘keeper with around 10 minutes to go.

The home team made it 3-0 at the end with the Socceroos pushing everything forward and leaving themselves exposed; they wouldn’t have had to do that if one of their chances had gone in.

And so to the storied playoffs against Uruguay in 2005. There were many of those moments that often prove decisive and in the second match in Sydney, it must be said, they went Australia’s way (finally).

Just as the Uruguayans would have been in serious trouble if they’d conceded in Montevideo in 2001, Australia couldn’t let their opponents score in Sydney in 2005. 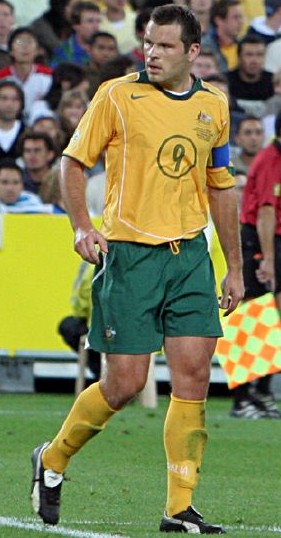 Mark Viduka during the home leg of the Uruguay playoff in 2005. Photo: David Luu / Wikimedia Commons

That’s because the Socceroos also came into the second match carrying a 1-0 deficit from the away fixture.

In the 20th minute, Uruguayan star Alvaro Recoba made himself a golden opportunity to score. From where I was sitting, it looked like it would be harder for him to miss. “It’s all over,” I thought in that split second. But his shot was wide.

Later in the game, striker Richard Morales should have done better with a free header.

Australia won 1-0 on the night, drew 1-1 on aggregate and penalties decided which team would go to the World Cup finals. Mark Schwarzer (sans mullet this time) was the hero of the shootout, as he’d been against Canada 12 years earlier.

A couple of things had gone against the Socceroos in the first leg in Montevideo; notably, the Uruguayans scored their only goal from a dubious free kick. The referee, however, might have also given them a penalty in the second half when Recoba went down in the box after being met by an onrushing Schwarzer. But there was no contact. I think…

And all that just reinforces that these playoffs are generally decided by a few incidents. Wednesday night probably will be too.

And as good as Australia’s performance was in the first leg against Honduras, the 0-0 result and the away goals rule mean that the Socceroos must win to qualify for Russia 2018.

A score draw is enough for the visitors, just as the 2-2 draw at the MCG was enough for Iran 20 years ago.

That’s what’s funny about how the away goals rule works. Once a goal is scored on Wednesday night, even if it’s a Socceroos goal, Australia will need to win to qualify. Only another 0-0 match would give us extra time and penalties.

An emotional rollercoaster beckons. And, if you’re anything like me, the best way to prepare will be to try to switch off between now and then.