Genuine ones that is; household names from soccer’s top competitions.

The idea has its limitations and one of them is that, even if our clubs can find the money for really famous players, they’re not likely to arrive until their careers are winding down.

Signing a Harry Kane or Eden Hazard in the next year or two? Forget it. Dreaming.

But tomorrow afternoon a global star of the game will be playing in quiet little Marden.

And she truly is an electrifying player.

There’s nothing new about Sam Kerr visiting Adelaide. She’s been here several times, having made her W-League debut in the competition’s first season (2008-9) just a few weeks after her 15th birthday.

But now she’s officially one of the world’s best.

Three months ago, Kerr was one of ten on the shortlist for Best FIFA Women’s Player 2017.

A month later, her omission from the list of three finalists for that accolade was met with howls of outrage. And not just in Australia. US greats Abby Wambach (a former winner of the award) and Julie Foudy were among those around the rest of the world who felt Kerr deserved better. 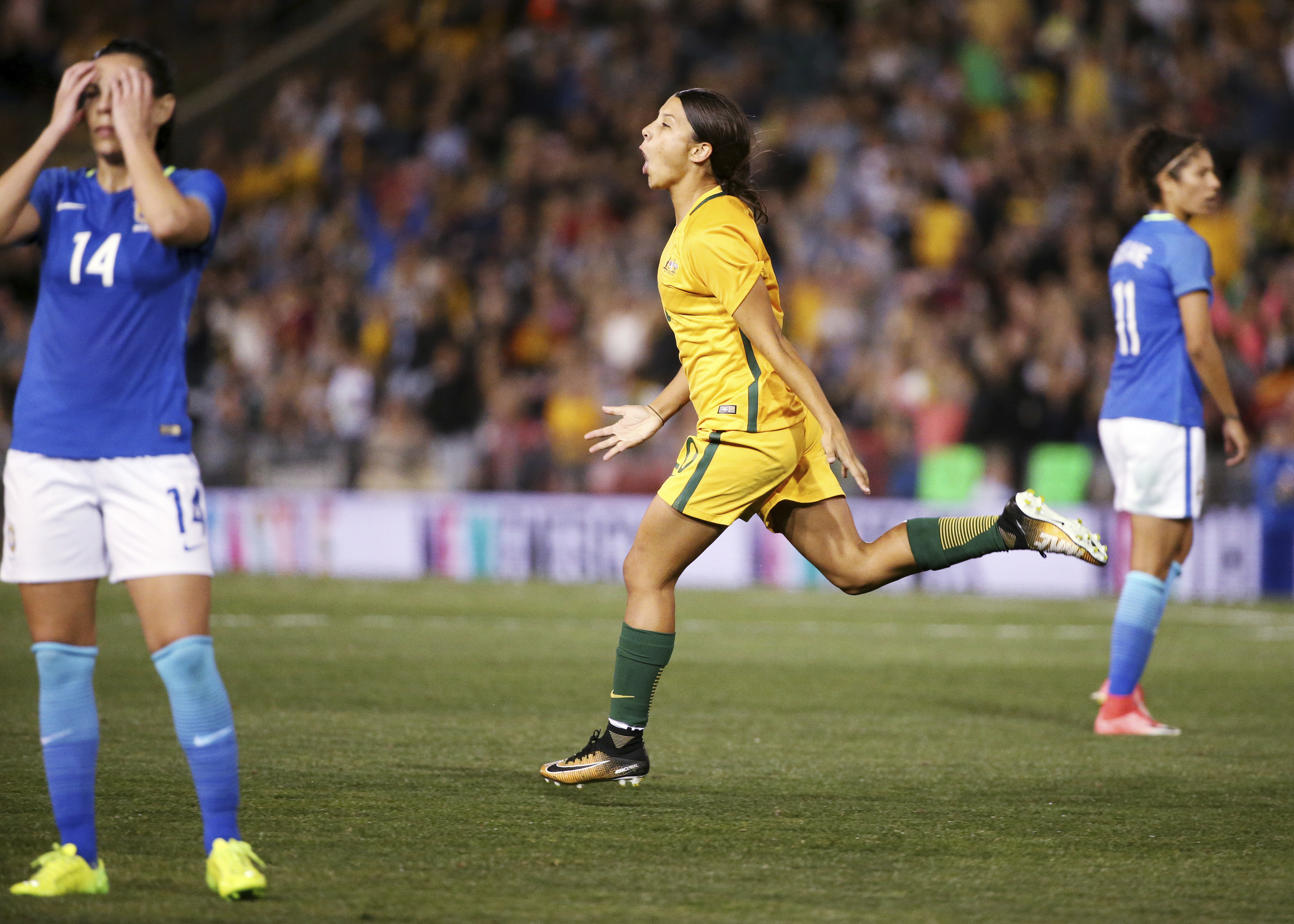 On the pitch in the US, Kerr bagged 17 goals in this year’s National Women’s Soccer League – a record for a single season. She’s also scored 42 in 75 W-League matches despite often playing wide.

Her Perth Glory side has made a fast start to this season’s competition with two 4-1 wins. It has plenty of other guns, including emerging US forward Rachel Hill who has five goals from those two games.

Adelaide United has sensational players of its own and you’ll be able to see them more than once this season.

At the age of 18, Alex Chidiac has already played for the Matildas four times – and they’re currently one of the world’s best teams.

Her dominance of the closing stages of this year’s Women’s National Premier League in Adelaide was something to see.

Chidiac’s Adelaide City side missed out on the premiership by losing its final match in the regular season. But two trophies were still on offer in the next four weeks: the knockout cup and the championship.

City defeated Adelaide University in the cup final 3-2 and Chidiac netted twice. But there was more to come. Much more.

To win the championship, City had to defeat the other three teams that made the finals: Adelaide University, Metro United and West Adelaide. All teams with several current and former W-League players.

And they succeeded with Chidiac scoring twice in all three games.

Her performance in the preliminary final against Metro United was especially outstanding and it’s a pity there’s no footage to show what she did that evening.

Metro, title winners in 2015 and 2016, led 1-0 late in the match. Chidiac had played well but her opponents were doing their best to nullify her, closing her down quickly.

But with around ten minutes remaining, Chidiac found the tiniest bit of space near the edge of the penalty area, just enough to shoot, and her precise effort went in off the post. With extra time looming, she scored a second and in minutes Adelaide City had gone from facing elimination to securing a spot in the grand final.

It was as if Chidiac just said “I’m not having this” and found a way to propel her team to victory. And it was absolutely stunning.

No less exciting than Chidiac is lightning-fast striker Adriana Jones. Her personal story is extraordinary and, on the field, her pace and ability keep opposition defences under tremendous pressure.

Emily Condon has been with Adelaide United for long enough to be described as an experienced player. But the midfielder is just 19. Like Kerr, she debuted at 15.

Condon is a great playmaker with a high work rate. She missed the entire 2016-17 campaign with illness after representing the Young Matildas in China so her return to W-League action is effectively a boost for United this season.

At the back, the team will be well served by two returning South Australians: Jenna McCormick and this season’s captain, Emma Checker. Both have won W-League honours with other clubs.

Behind them is one of the competition’s bravest and most talented ‘keepers: Eliza Campbell. She was called on regularly last season as United’s attack-at-all-costs approach left plenty of space for opposing teams to exploit.

But Campbell saved the team on several occasions. No one who saw her superhuman performance in a 2-2 home draw with Canberra last season – on a night when the visitors dominated and should have won comfortably – will forget it.

United have brought in four excellent overseas players again and this season they’re all from the US. Defender Katie Naughton and midfielder Danielle Colaprico return for a second campaign in Adelaide.

They’re joined by Alyssa Mautz, who was with Perth last season, and Makenzy Doinak. Both can play as midfielders or forwards and Doniak scored on her A-League debut on Friday night in United’s 2-1 loss to Western Sydney.

While they’ll all be worth watching, Colaprico might be a standout this season. Her contribution for United in 2016-17 was a little underrated while Adriana Jones, Sofia Huerta and Racheal Quigley were scoring freely. And she’s just had a superb year in the National Women’s Soccer League.

And, frankly, the whole team will be worth watching.

I should disclose that I’ve been commentating W-League matches played in Adelaide for radio over the last two years; I wouldn’t do it if the competition wasn’t skilful and exciting.

See you at Marden.