As all sports fans know, you’ve gotta have a team.

Indeed it was quite brave.

Let’s just remind ourselves how we ended up with that message: soccer has more than two million fans in Australia but nearly half don’t have an A-League team.

Which can’t be that surprising – most of the clubs are 21st century constructs.

But rather than ask the hackneyed question “why isn’t interest/support growing?” I’d pose something else: “how much can it grow?”

The same ten clubs have played in the last five A-League seasons (the longest ever period without teams entering or leaving the competition).

The most recent season’s overall attendance was actually leading 2015-16’s before Sunday’s grand final but dropped below it because the Sydney Football Stadium has a smaller capacity than Adelaide Oval (which hosted the decider a year ago).

Nevertheless TV ratings are up 11% this season so talk of decline is off the mark.

I wouldn’t argue that interest in the A-League is either better or worse. But can it substantially increase?

We (in the soccer community) expect growth. Yet, while it should be obvious, we rarely seem to acknowledge the biggest limitation of all: we don’t have a top product and we never will.

England does. Germany does. Spain does.

And if we can go back to where we started, that’s also why so many Australians who love the game don’t have an A-League team.

These discussions don’t just occur here – where the sporting landscape is crowded by four football codes. They can be heard in traditional soccer nations where low domestic attendances are also often blamed on fans’ obsessions with the big leagues of those above-mentioned countries.

So why do we carry on as though the possibilities for our sport are endless?

Sure, some changes are needed and improvements can be made. But if you read the online thoughts of many of the more opinionated fans, you might imagine that the game is beset with problems.

Fifteen years ago it was on its knees: low attendances, a broken TV broadcast deal, and a bankrupt governing body.

We’re the depressed economy that got rich quickly. (Who really thought we’d maintain the crowds we get now? With all matches broadcast live on pay TV? And yearly revenue of $100 million?)

Forget that we were fretting about our survival not that long ago. No, no: suddenly it’s “how big is my piece of the pie?”

And why don’t we have a national second division yet? Why do we decide our championship with finals? Where is the free-to-air deal?

A more appropriate motto for our game might be: you’ve gotta have a whinge.

Even better if your whinges contradict each other.

On Sunday the boring we-shouldn’t-have-end-of-season-finals crowd were out in force, doing what they do best: trying to ruin everyone else’s fun.

But then the match set a new TV ratings record. And I kid you not, some of the anti-finals people switched to posting about how much better it would have been if the game had been broadcast live on free-to-air.

You wouldn’t read about it. Except I did.

There are also fans out there who are against finals but have plenty of suggestions about how FFA should spend its money (e.g. on a national second division). But they must be aware that once you take away finals, you take away a massive earner.

Then again, I guess that’s ok because if a result is that the governing body makes big losses people can whinge about that too.

FFA could provide a lot more leadership in these discussions. Its slow pace of change may or may not be best for the overall health of the game but without being at the forefront of these conversations, it leaves a vacuum which others fill. (Occasional media telling us, for instance, that expansion would be costly simply won’t do.)

And because others fill that space, the A-League’s problems are exaggerated; its successes diminished.

It’s been a fine season. Some pundits have suggested that we’re a bit bored with the same league structure and teams but the stable attendance figures coupled with TV ratings increases suggest otherwise.

There was good and bad on the field. The Australian clubs’ Asian Champions League campaigns were undoubtedly disappointing but the nation’s two best teams this season – Sydney FC and Melbourne Victory – didn’t play in the ACL.

I’ve mentioned it before but it’s worth repeating: Melbourne Victory accumulated the same number of points in the 27-round season that Adelaide United did in its winning 2015-16 campaign.

Yet the Victory still finished 17 points behind rampant Sydney FC.

The Sky Blues took the A-League to a new level and completed their mission in Sunday’s decider in one of the most spirited matches the competition has seen. 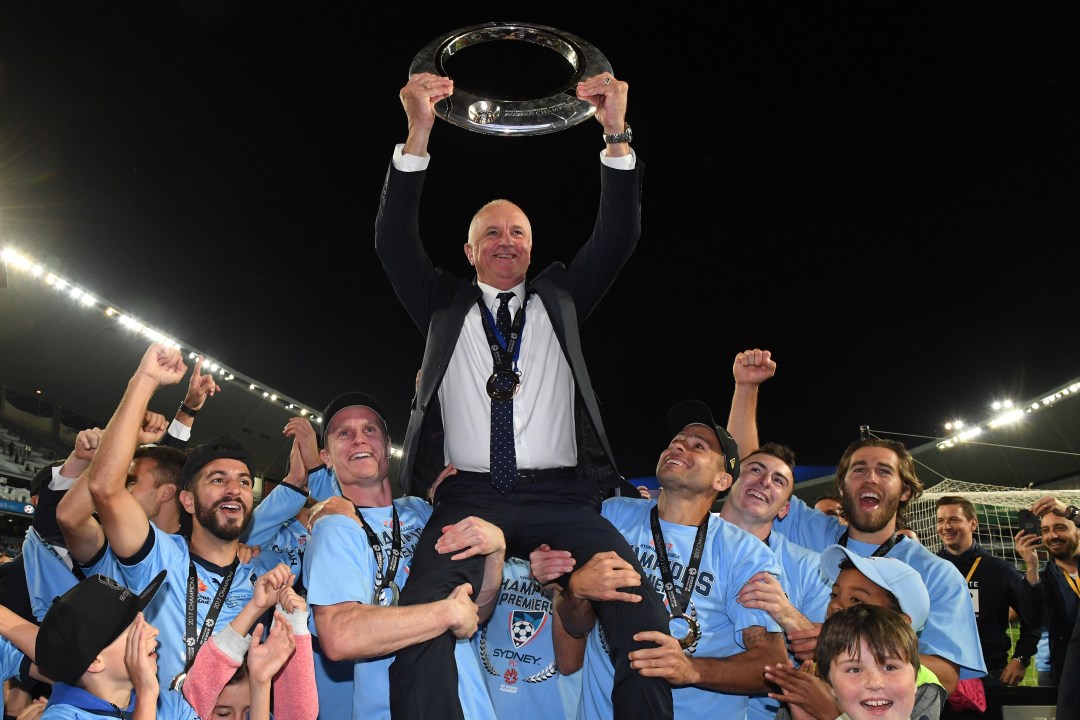 Here in Adelaide we saw our champions fall to an ignominious 9th place which equals the lowest ever finish for an A-League title holder (though after winning the grand final in 2007-8, Newcastle finished bottom the following season – eight teams back then).

Nevertheless, amid the carnage, young guns Riley McGree and Jordan O’Doherty emerged and they’re contracted for next season.

It’s hard to predict what the 2017-18 A-League will look like not least because it won’t kick off for five months.

And while I’ve whinged about the whingers, there is one thing most of us agree on – some decisions about what the competition will look like over the coming years need to be made soon.

But no matter how well thought out and executed they are, they may only take us so far.

For some people, who look wistfully to Europe and imagine that there are formulas that could deliver a similar environment in Australia, it will never be enough.

This was his final Manton Street Tales for the 2016-17 A-League season, but he will continue to contribute intermittently before Adelaide United’s next campaign kicks off – hopefully with more success!