Most Adelaide United fans probably can’t wait for Sunday’s grand final to be over as it will mean that this wretched A-League season finally ends (though at least we can still call ourselves champions until then).

But there is something to look forward to. Indeed, this weekend’s decider could add to a string of highlights that 2016-17 has provided.

They began in November when Melbourne City beat Sydney FC to win the FFA Cup.

Then on the same glorious weekend in late January, Melbourne City defeated Sydney FC in the National Youth League grand final and Sydney FC also failed to win the W-League premiership thanks to a 5-2 thrashing at the hands of Adelaide United.

For good measure, Sydney’s shot at the W-League championship ended the following weekend with a 5-1 loss to Perth.

And Sunday could make it five when the Sky Blues face my second-favourite A-League team: whoever is playing Sydney FC.

But the odds are heavily in The Establishment’s favour.

Sydney FC dominated the A-League this season with a record 66 points from 27 games. The Sky Blues only conceded 12 goals (also a record) and finished (a record) 17 points ahead of Melbourne Victory whose total of 49 points equals Adelaide United’s tally from last season… and that was enough for the Reds to finish top in 2015-16.

And it will be Victory, which has scored just twice in its last five matches in a stuttering end to its season, trying to stop Sydney’s seemingly inevitable march to the title.

It’s not impossible. While the goals have dried up for Victory in recent weeks, a team with the attacking gifts of Marco Rojas, James Troisi, Fahid Ben Khalfallah and Besart Berisha should provide a few threats to Sydney FC’s (admittedly miserly) defence.

And while Victory has lost all three of its encounters with Sydney this season, it’s been a one-goal margin each time.

Which is a fair reflection of the gap between the two teams; the Sky Blues are undoubtedly better but Victory should be good enough to give us a competitive encounter on Sunday.

For what it’s worth, there’ll be a lot of neutrals hoping Victory succeed too.

Unfortunately some of them will be doing so for the wrong reason.

The right reason is obvious – anybody-but-Sydney.

But recent weeks have given us the latest battle in Australian soccer’s culture wars with a predictable movement of commentators arguing that Ange Postecoglou’s Brisbane Roar teams were better than the current Sydney FC team.

If Melbourne Victory scores an against the odds win, it will be used as justification by those who want to insist that Postecoglou’s Brisbane was the A-League’s best ever team

If we can leave finals aside for a moment (particularly as this season’s decider hasn’t been played yet), the numbers support the Sky Blues’ case.

Their 66 points from 27 matches surpassed Brisbane’s famous 2010-11 season in which Roar collected 65 points from 30 games.

And while this Sydney FC side is mostly credited for its defensive record, it scored 55 goals in the 27 round home-and-away season; a higher average than what Postecoglou’s team achieved six years ago (with 58 goals from 30 matches).

What Ange’s Roar lovers have up their sleeves is that Brisbane completed 2010-11 with grand final success (and would win the following season’s grand final after finishing 2nd on the ladder). 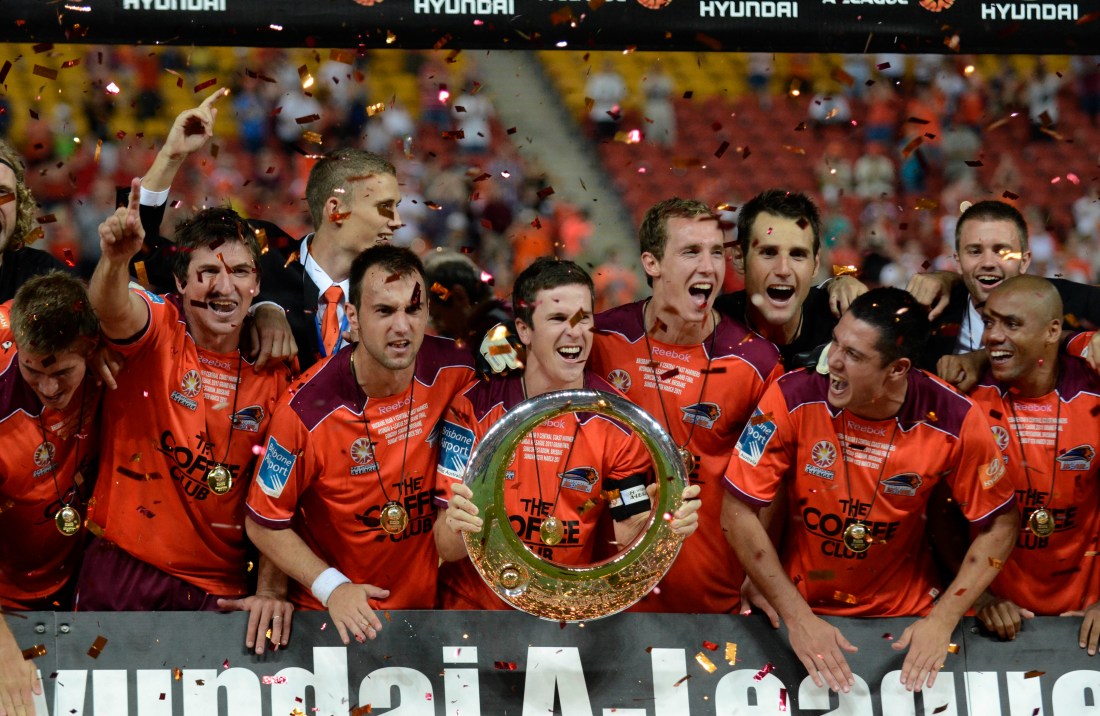 No matter what happens in this Sunday’s grand final, many commentators will maintain that Ange Postecoglou’s Brisbane is the best team the A-League has seen. Photo: Steve Holland / AAP

Make no mistake, if Melbourne Victory scores an against the odds win on Sunday, that’s going to be used as justification by those who want to insist that Postecoglou’s Brisbane was the A-League’s best ever team.

Mind you they’ll probably keep insisting that anyway because… you know… Ange’s teams played proper possession-based soccer while Graham Arnold’s Sydney FC is often described as being “efficient” (one of our game’s great backhanded compliments).

Which is all part of the flawed thinking that has had such a negative influence on the sport in Australia. Thinking that, at best, suggests that the possession or passing game breeds improvement and, at worst, overvalues style while undervaluing results.

I’m not going to expand this discussion further here as I’ve written it all before, particularly in my closing piece for 2016 (which, coincidentally, also summarised my aversion to Sydney FC).

But, as much as it will pain me, if the Sky Blues complete their record breaking season with grand final triumph on Sunday, I will acknowledge that the A-League has seen no better team than the Sydney FC of 2016-17.

Because, as in every other sport, success in soccer is decided by results and they provide the most meaningful comparisons.

Attractive play may produce goals but I’m pretty sure our game has never used judges to award them for artistic merit.