Now I’m sure if you’re an Aussie Rules fan, you probably know a few people who could easily name every VFL/AFL or SANFL grand final winner since birth.

But when I ask that question about 1978, the NSL’s second season, I’m more likely to get two wrong answers than I am to hear the correct one.

There are good reasons why many fans make these mistakes. West Adelaide did win the NSL title in 1978 and did so by finishing top of the ladder.

Then a funny little thing happened – a finals series was held for the top four teams anyway.

And it used the Page-McIntyre system (first devised for Australian Rules in the 1930s) which gave the top two teams a double chance.

Perhaps here in SA more people would remember or at least know about those matches if West Adelaide played in the grand final. But the title winners went out in straight sets leaving Eastern Suburbs – aka Sydney City – to defeat Marconi in the grand final.

It’s instructive isn’t it? Despite observing the sport’s traditions and awarding the (second ever) championship to the team that finished on top of the table, the Australian Soccer Federation couldn’t resist organising a playoff series using a system which was first designed for another code.

Perhaps even more instructive is that 9136 people attended that grand final which pitted two Sydney clubs against each other. (That may be laughable by today’s standards but their two home-and-away games that year drew crowds of just 5731 and 3598.)

And all that for a match which didn’t award a title of any sort, except perhaps that the victors could call themselves “grand final winners”. Eastern Suburbs / Sydney City is now known as Hakoah Sydney City East and its website has a page dedicated to its honours. Any mention of 1978?

Over the next five years, the championship would continue to be awarded to the team that finished top. But most of those seasons still had a finals series which didn’t really award an honour.

Nevertheless, interest in those playoffs continued. Sydney City won the championship in 1980 and then reached the grand final against Heidelberg United. That match – between a team from New South Wales and a team from Victoria – was played in Canberra and drew a crowd of 11,126. Again, in those days, that was a lot. There was an NSL team in our national capital back then as well so it wasn’t a case of the attendance being boosted by soccer-starved fans.

For 1984 the NSL was expanded and two “conferences” were established. And for the first time, the championship would be awarded to the grand final winner.

Even though the grand final was between the two divisional winners, each conference used the McIntyre final five system to decide which team would advance rather than simply rewarding the team that finished on top of its ladder.

This format lasted for three years and the grand finals, played over two legs (home and away), were mostly well attended.

The 1986 edition should have ensured that end-of-season playoffs would be a permanent presence. In the first leg at Hindmarsh, Sydney Olympic defeated Adelaide City 1-0. The only thing I remember my father saying on the drive home from the game was, “that’s all”. Carrying a deficit into the away leg? No chance.

But City would stun Olympic at Parramatta Stadium and clinch the championship with a 3-1 win (3-2 on aggregate).

The NSL had its first upset in a grand final that decided the title … and then threw it away.

For 1987, the league returned to a single division (which meant the departure of ten of the previous year’s clubs) and chose to revert to awarding the title to the team that finished on top of the ladder.

And what did this return to previous practice achieve? Nothing. Except perhaps the realisation that something was missing; finals were popular, especially when they counted. The tortuous (and torturous) story finally ends in 1988 when the grand final decides the championship again. That arrangement would continue in the NSL and was retained for the A-League.

It paid dividends too. The 1988 grand final between Marconi and Sydney United attracted 17,064 fans. The same two teams drew the highest crowd in the home-and-away season as well but that was just 8014.

Records would keep tumbling. The grand final attendance for the NSL’s first summer season (1989-90) was 26,353. For the 1996-97 decider between Brisbane Strikers and Sydney United, more than 40,000 were at Lang Park. And in the NSL’s twilight years, three grand finals in Perth would average more than 40,000.

We’ve had ten A-League grand finals so far; five of them have attracted more than 50,000 spectators.

But there’s something else these matches offer; something beyond high attendances, gate receipts and TV ratings. It’s the drama and emotion they produce.

Astonishingly, there are fans out there that would happily take these matches away from us

Next month will mark the 25th anniversary of one of the most sensational games played in this country: the 1990-91 NSL grand final. Melbourne Croatia was easily the better side and was within minutes of securing the championship. But South Melbourne scored an unlikely late goal to send the match to extra time. The title would be decided by penalties and, after three misses by South, Croatia had two shots at winning – both hit the frame of the goal. After both teams had taken eight penalties each, South Melbourne prevailed. The encounter saw the eventual champion complete not one but two great escapes.

Nine years later we were treated to an even more extraordinary finale. In the first ever decider in Perth, the home side had 43,000 locals celebrating with a 3-0 half time lead. The second half saw a stunning comeback from Wollongong City. Again, the equalising goal was scored just minutes before the full time whistle. Then another feature of the 1990-91 decider was repeated: Perth missed two penalties in the shootout which would have clinched the title. It went to Wollongong.

We’ve had plenty of memorable grand finals in the A-League too. Brisbane Roar v Central Coast in 2010-11 anyone? With the Mariners 2-0 up and four minutes of extra time remaining, some of the nearly 50,000 Queenslanders at the match were heading out of the stadium. Any Roar fans that missed what happened next will probably regret it for the rest of their lives. Somehow their team got the two goals they needed and then won on penalties. Late drama has been a feature of all three A-League grand finals played in Brisbane. 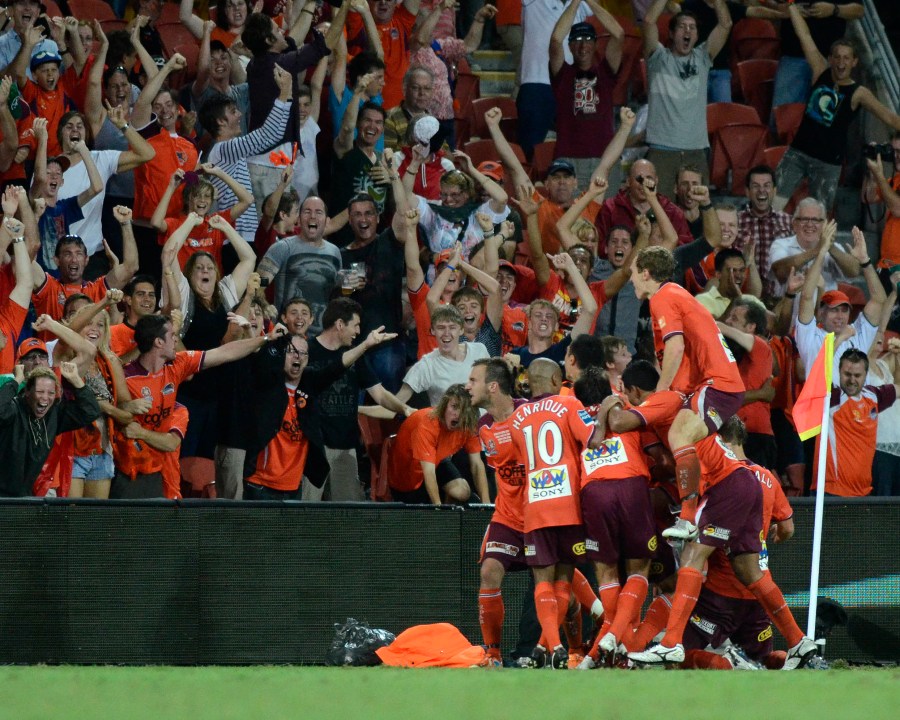 If you left early, you missed this. Photo: Steve Holland, AAP.

There have also been many great matches in earlier weeks of finals series and Friday night’s clash between Brisbane Roar and Melbourne Victory was no exception. You could write several books about these games.

Yet, astonishingly, there are fans out there that would happily take these matches away from us.

And why? Because (apparently) a true fan understands that a championship should only be awarded to the team that finishes top at the end of the season.

Every year, around finals time, you hear from these killjoys. They’re on internet forums, in comments sections and on radio talkback.

As well as being anti-fun, many of these sourpusses also delude themselves into believing they are morally or intellectually superior. They pull out earth-shattering arguments such as: “They don’t decide championships with playoffs in real football countries like England, Spain and Italy.”

[No, really? I’m sure Manchester City and Arsenal played each other in a preliminary final last season.]

Many of these self-styled purists also resort to that lowest of debating tactics – accusing people that don’t agree with them of being Johnny-come-latelies or having ulterior motives: “[person who likes finals] is mainly an AFL/NRL fan”; “[soccer writer who likes finals] is a tool of Football Federation Australia.” Yeah right.

Actually it’s somewhat amusing that many in the anti-finals faction reason that the practice is maintained because FFA has had people from other codes at its helm and (consequently) mimics them. In fact it was the NSL, with its use of McIntyre systems and the insistence on referring to teams that finished top as “minor premiers”, that was the great imitator.

Though we still have finals, the system has been changed to remove the double chance. Also, since the A-League began, the winner of the home-and-away series has been the premier, not the minor premier (while the grand final winner is the champion).

And rightly so. The only sensible thing some anti-finals people say is that finishing top rewards the best team over the course of a long season. But this is now given genuine recognition with the Premier’s Plate and the A-League’s first spot in qualification for the Asian Champions League. (By the way, that can matter. In 2013 Australia only got one direct spot in the ACL and it was given to Central Coast, the 2011-12 premier, not Brisbane Roar, the champion.)

It’s also true that there are many great matches in the home-and-away season and that sometimes it produces an exciting finish (as it did a week ago). But why not have the excitement of finals as well?

They’re undoubtedly what the majority wants. The most recent example of that is here in SA. Adelaide United hasn’t been able to sell out a home-and-away match at Hindmarsh all season but this week’s semi-final against Melbourne City has the hottest tickets in town.

That majority can afford to remain relatively quiet in this debate knowing that FFA is unlikely to be stupid enough to throw away matches that generate revenue, increase interest and culminate in a yearly showpiece which can be used to promote the game.

Yes, finals attract part-time fans and event goers. But really, so what? If there are people that wouldn’t normally attend putting some extra dollars into the sport that’s fine with me.

And, as it happens, those “real” football nations have worked this out and in some cases have overlooked the fairness principle for the excitement of playoffs.

They may not decide who wins championships, but England and Italy, among others, use them for promotion between divisions. In some ways (e.g. financially), that’s more important than titles.

Until 30 years ago, the top three teams in the second level of English football would be promoted to the top division. But then a change was made so that only the top two would be promoted automatically and the next four teams would go into playoffs to decide the last spot.

Given the riches of the English Premier League, promotion is estimated to be worth more than £120million. And that figure rises every year.

Most fans know the promotion playoffs compromise fairness; most fans also want to keep them. They have provided some incredible scenes over the years.

So if you’re feeling some sort of guilt because you love soccer and love playoffs, my advice is: don’t.

Enjoy the A-League finals and ignore those who imagine they’re superior fans because they’re pure.

As a famous Australian prime minister said years before taking office: certainly the impotent are pure.