It’s a little odd swinging between discussing your A-League team and the latest events in FIFA, an organisation which often seems to be even further away than its headquarters in Zürich.

But our game’s governing body was the story of the weekend, not least because it has a new leader for the first time this century.

When people raise the subject with me, they normally ask one of two questions: Is it really that important (following what happens in FIFA)? Or: How did those people keep getting away with all that… dodginess?

[OK, the word is usually stronger than “dodginess” but we’re not ready to be sued just yet.]

The two questions are not unrelated. One of the reasons FIFA officials got away with dodginess for so long is not many fans think it’s that important.

Sure, the organisation is widely derided but for every story about its latest shenanigans, there’ll be hundreds of transfer rumours, results updates and clips showing the latest outrageous examples of breathtaking play by Cristiano Ronaldo, Zlatan Ibrahimović or anyone that scores goals for Barcelona.

And there’s nothing wrong with that. Sport is supposed to be a release; through it we can focus on something other than our daily travails. The game will go on so why ruin your fun by obsessing about FIFA’s power players and their… dodginess?

I am in the minority who find it fascinating and perhaps that’s because I’ve worked in politics and government for many years. But it also helps me find answers to questions about the game.

Why does Asia get four or five of the 32 places at the World Cup finals? Why does FIFA use its dubious rankings system to decide who gets seeded at the World Cup? And why are we going to Qatar in 2022?

The easy answer is that dodgy people have made these decisions. And yes, several FIFA officials have been banned, fined or suspended for their extreme dodginess.

But more detail is available. Sometimes a bit of understanding about these matters can even give you an idea about what might happen in coming years.

One of the hot topics in the campaign for the FIFA presidency was expanding the World Cup finals from 32 teams to 40. To a casual observer, this may seem something that a winning candidate could bring in quickly.

In fact it can’t happen earlier than the 2026 tournament. Moreover, the president can’t act alone as the decision has to be carried by the FIFA Executive Committee (or the 36-member FIFA Council which will replace the ExCo).

[By the way, it’s a terrible idea. It would mean having eight groups of five teams (instead of eight groups of four) which would create a bye for each team. The tournament, which currently fits nicely into a one-month period, would need an extra week. And the problem there is that World Cups come at the end of long domestic seasons. As it is, many players have little left in the tank when they get to what is supposed to be the sport’s quadrennial showpiece and its quality suffers.]

The election process finally ends the Sepp Blatter era which began more than 40 years ago and has included more than 17 years as president. 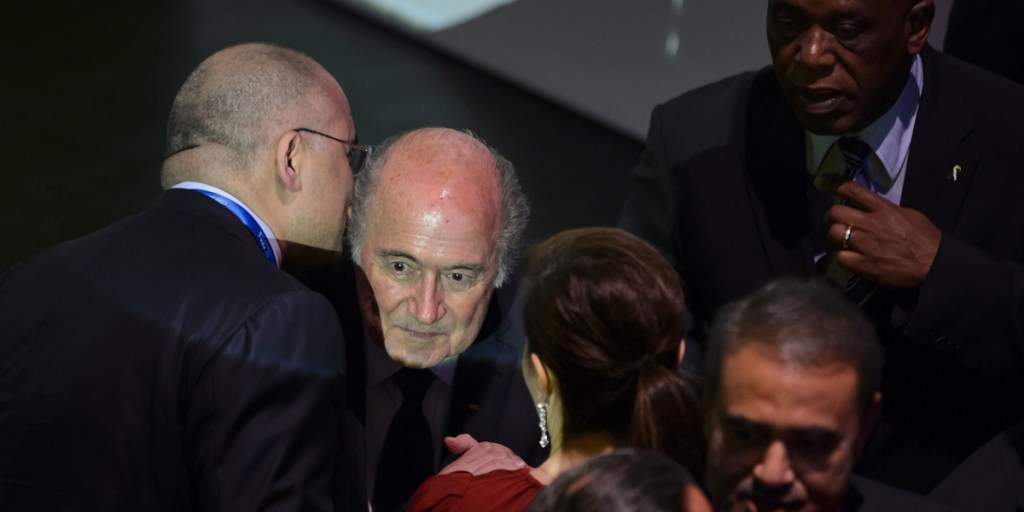 Ousted FIFA President Sepp Blatter at the opening ceremony of the 65th FIFA Congress in Zurich.

You might think that no tears will be shed for him but that’s because you’re a creature of the first world.

In those crazy days last year when Blatter was re-elected before suddenly announcing he would resign, the few Africans I could find on social media were mainly positive about him. Here are a few Tweets from that time:

“Blatter brought the World Cup to Africa at a time when it was sightly unthinkable. I certainly won’t forget that.”

“Blatter did well for African football as far as I am concerned. Including the world cup and other FIFA sponsored footy programs in Africa.”

To his critics, Blatter’s support for Africa was a cynical vote buying exercise. Dish out money to poorer countries, give them tournaments and you’ll be rewarded at the ballot box.

But he was driving development in countries outside the sport’s traditional heartlands (Europe and South America) well before he first stood for the top job in 1998. Blatter had been doing that since he joined FIFA in 1975 – it was part of his job as “technical director”.

In the mid ‘70s, FIFA – and soccer – had nothing like the wealth or global reach you see today.

The 16-team 1974 World Cup finals included just three teams from outside Europe and South America. That number will be 13 or 14 (in the 32-team tournament) in Russia in 2018.

And its revenue (more than US $2billion in 2014) has increased exponentially since the mid ‘70s when the sport’s governing body couldn’t even generate US $10million a year.

Blatter must get some credit for this growth. When he joined FIFA the organisation, famously, had just 12 staff.

Why point all this out? Well much dancing has been done on Blatter’s political grave so balanced assessments have been few and far between.

He did earn much of the ire of fans and observers around the globe. There were gaffes, daft ideas and promises he couldn’t deliver.

And any discussion of his legacy will always be dominated by his spectacular fall and what forced it – the dodginess that flourished on his watch.

Sexwale’s biography is far more interesting than his run for the presidency was. An anti-apartheid campaigner, imprisoned on Robben Island, who became a wealthy businessman. But he faced the humiliation of receiving no votes – even South Africa wasn’t backing him – so he announced his withdrawal at the end of his candidate’s speech.

Champagne was my favourite contender. Though a long-time FIFA insider, the former French diplomat has actually spent a few years putting some sensible ideas together which are designed to meet the sport’s challenges. He opposed World Cup expansion but supported more technology in the game and trying to reduce the gap between soccer’s haves and have nots.

But he’s more of an operative than a front man. While Champagne is no brut, his campaign wasn’t sparkling and he received just seven of the 207 votes cast.

Having been knocked out by Blatter in last year’s election, Ali returned for another shot at the title. His policies were a mixed bag (greater focus on women’s football – tick; expanding the World Cup – cross). But no one’s going to remember them because his campaign was dominated by his complaining about other candidates’ tactics and election procedures (which, as far as I could tell, were no different a year ago). Perhaps the Jordanian prince was bitter that he was losing a lot of the support he had when he was the anyone-but-Sepp candidate. With all of Ali’s jabs missing their intended targets, he received only 27 votes.

The biggest concerns around Bahrain’s Sheikh Salman were allegations of human rights abuses. His campaign seemed short on specifics too. There were noises about reform and tackling corruption but they lacked detail. Nevertheless, he went into the final week as the narrow favourite as it seemed he had locked up most of the votes in Africa and Asia (which have 100 between them). It wasn’t enough. The 85 votes he received in the first round only increased to 88 in the decisive second round so Salman failed to leap into the top job.

The successful candidate was Gianni Infantino which means we’ve replaced one Swiss chap with another (goodness, the towns he and Blatter were born in are only around 10 kilometres apart). The most concerning thing about him is that he was only running because of Michel Platini’s ban.

And his platform was straight out of Platini’s playbook (which itself was inspired by Blatter). Of the five candidates, Infantino was the strongest supporter of a 40-team World Cup and sending even more of FIFA’s cash reserves to its member associations. He has trotted out the line about the need to have a “credible, trusted and transparent global governing body”; just how he defines that remains to be seen.

To his credit, Infantino grew in the campaign and, after leading by just three votes in the first round, he was able to smoke Salman by gaining the support of voters who’d originally chosen Champagne or backed Ali. The Swiss-Italian received 115 of the 207 votes cast in the second round.

It is impossible to make predictions about how successful his presidency will be. Infantino isn’t likely to be able to wield the amount of power that Blatter did and old Sepp, as we know, often didn’t get his way.

So the new FIFA council may be even more important in carrying out reforms that were agreed on Friday. The elections to choose its membership will have a lower profile but they too will be worth following.