This is a public service announcement.

If you’re a Socceroos fan, or someone close to you is, batten down the hatches on Thursday night.

There’s a storm coming and it will continue on Friday. The weekend might bring clearer weather but then we’ll still be reading about the previous days’ damage.

One of the most despised systems in our game – the FIFA rankings – will place Australia in its lowest position (probably 68th) since last year’s Asian Cup catapulted our national team from 100th to the dizzy heights of… 63rd.

By Friday a few bright sparks will see that we’ve also dropped to 6th in Asia (from 4th), that Saudi Arabia and United Arab Emirates have overtaken us, and that Uzbekistan isn’t far behind.

And this is the part someone might work out by the weekend: it could hurt our chances of qualifying for the 2018 World Cup. More on that later.

The rankings system is probably FIFA’s most transparent practice

When you hear or read outraged comment about FIFA rankings, complaints normally fall in to one of three categories: the system is flawed; they aren’t that important; or they’re part of a giant conspiracy in which the results are manipulated to suit some FIFA agenda.

Of those, only the first type of complaint is valid, however, while there are flaws and the methodology could be improved, any system that attempts to rank nations is going to have its shortcomings. Some are unavoidable, such as the infrequency of meaningful international matches. For example, in the last four years, the Socceroos have played just 29 games that truly matter: 20 World Cup qualifiers; three matches at the 2014 World Cup finals; and six in last year’s Asian Cup (using similar criteria, England has only had 32 important games since February 2011 – the problem is not confined to our region).

But it’s wrong to suggest there is manipulation of the rankings or some sort of conspiracy is to blame for outcomes which at times seem to make little sense.

Indeed, the rankings system is probably FIFA’s most transparent practice.

On its website there is a fact sheet with a complete explanation of the calculations (and, by the way, they haven’t changed since 2006). People with skills in mathematics and programming have all the information they need to create rankings predictors.

Which is why I can tell you that the Socceroos will probably drop to position 68 when FIFA updates its rankings on Thursday. Some people are doing this useful work.

And yes, to answer the other type of criticism, it is important. But even among those who accept this, it’s easy to focus on the wrong thing.

In Australia’s case, it wouldn’t matter whether we were 20, 60 or 100 in the world. Sure, a high position can fill us with pride and a low one might embarrass us but that doesn’t affect anything in FIFA competitions.

For the World Cup finals, the host nation and the top seven ranked nations (that qualify) are seeded so that none of them meet during the opening phase. But beyond that, FIFA prefers to ensure each group has countries from different continents.

That means some World Cup groups are much stronger than others. There’s nothing stopping one having Africa’s best team and Asia’s best team while another has the weakest qualifier from each continent.

In short, unless a country is heading to the World Cup and it is (or might be) ranked in the top seven or eight, its position is largely academic. Australia has never been higher than 14th.

What does matter is where we sit among countries in the Asian Football Confederation because the AFC uses those rankings to determine how it seeds teams in World Cup qualifying.

By the end of March the current phase of World Cup qualifiers in the Asian region will give us 12 countries that move on to the next round. They will be divided into two groups of six and only the top two teams in each group will go to the 2018 tournament in Russia.

[It is possible to finish third and reach the World Cup finals, but this would require winning a playoff against the team that finishes third in the other group and then facing a country from CONCACAF, the confederation that covers North America, Central America and the Caribbean.]

When the AFC draws those groups, it will almost certainly use FIFA rankings to ensure that Asia’s two highest teams will be in separate groups, the next best two will also be kept apart and so on.

And this is why the real concern for Australia is not the imminent drop to 68 in the world, it’s falling to 6th in our region (instead of 4th).

Asia’s leading countries at that point are likely to be (in order): Iran, South Korea and Japan. If Australia gets back to 4th it will avoid Japan and one of the top two teams.

If, however, the Socceroos remain outside the top four, a group with either South Korea or Iran and Japan will be a 50 per cent possibility. And that will make qualifying so much harder.

Of course, we need to respect all other potential opponents, particularly the much improved Gulf nations, but a combination of Iran and Japan or South Korea and Japan is the most likely to turn Australia’s road to Russia into a dead end.

So when Australia plays Tajikistan (in Adelaide) and then Jordan in late March, there is more at stake than reaching the next round. The Socceroos can ensure that happens just by beating Jordan or beating Tajikistan and then drawing with Jordan.

But to maximise the chance of returning to Asia’s top four and getting a better draw for the next phase of qualifying, Australia must win both games.

It surprises me that there is so little recognition of where we are placed in our region. The AFC has already used FIFA rankings twice for this World Cup cycle alone: first to work out which teams would get a bye through the opening round; and then to decide seeds for the current qualification phase. And, incidentally, the Socceroos could have missed being one of the eight countries seeded at the head of a group in this round if they’d flopped in the Asian Cup – they were tenth in the AFC before that tournament.

Even Football Federation Australia, which must know how important our position among Asian teams is, rarely acknowledges it publicly. No mention in its story about the latest FIFA rankings last month. 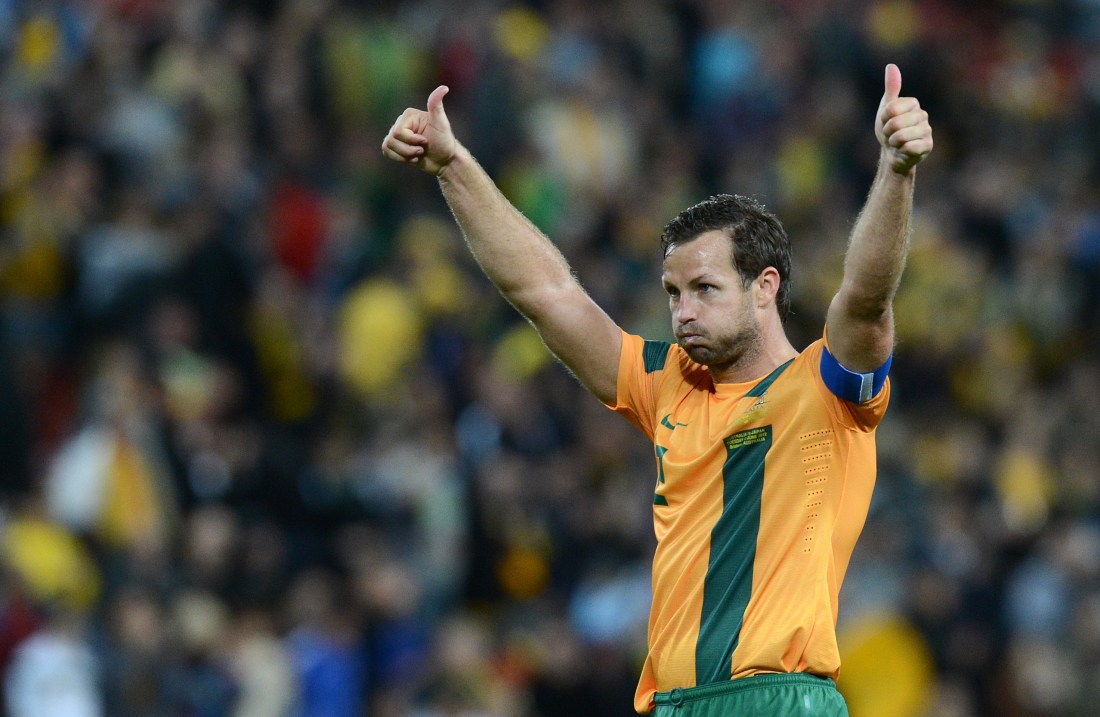 Then-captain Lucas Neill reacts with the crowd following the 1-1 draw between Australia and Japan in the World Cup Asian Qualifier in 2012. Photo: Dave Hunt, AAP.

Now you might have another question or two. Why will we drop so far this month? And why have we fallen so dramatically in recent times?

Both answers are straightforward.

Yesterday was the first anniversary of the Socceroos’ victory in the Asian Cup and that tournament boosted Australia’s ranking points. But those points eventually lose value. Results over the last 12 months have a 50 per cent weighting; it’s 25 per cent for matches played between 12 and 24 months ago.

And, simply, the reason for the impending drop is those Asian Cup games are moving to the 12 to 24 months old bracket.

Australia’s fall in recent times has largely been because of the period between the June 2013 match that clinched qualification for the World Cup finals and the beginning of last year’s Asian Cup. The 18 games played by the Socceroos in that time resulted in three wins, three draws and 12 losses.

That period included Australia’s gallant performance at the 2014 World Cup but you get no points for losses irrespective of goals scored, the strength of the opposition or the importance of the match.

As the rankings include games played up to four years ago, the poor run of results in the 18 month period from July 2013 to the end of 2014 won’t begin to drop out of calculations until the middle of next year; they won’t be completely gone until December 2018.

By then we might not be dreading the monthly release of FIFA rankings.