It’s the major talking point out of the 12-point loss to Richmond at the MCG.

Jonas and Butters returned to the field with bandaged faces only a few minutes after what Hinkley himself called “a hit”, although Butters had to go to the bench for further treatment near the end of the match.

It was Fisher’s call not to put the two players through 20-minute concussion protocols.

The collision and its aftermath has reignited discussion in the AFL about concussion, which is a major issue throughout world sport.

But Hinkley said the two players were not concussed, adding he spoke to them immediately after the game.

“They both got bashed up … (but) they weren’t laying down and they weren’t fainting, they weren’t doing anything silly, they were talking to me very clearly – ‘aw mate, I’m going to have a big black eye, but I’m pretty good’,” Hinkley said.

“They’re tough players, too … that’s a hit, for those who don’t think the game’s tough.”

Hinkley made it clear he has full faith in Fisher and team football manager Chris Davies, who were on the bench as the two bloodied players left the field.

“I have a doctor who’s been with our footy club for 25 years and the conversation between our doctor and our football manager (Chris Davies) … was these boys, they have no issue with concussion,” Hinkley said.

“So if anyone has a challenge on that, and they feel more qualified than Mark Fisher … feel free.

“But I think you need to be really, really sure that you’re not trying to umpire or make some calls from outside the fence when you have no knowledge.”

Hinkley bristled when asked if there would have been further assessment had the collision happened earlier in the game.

“Do you think a doctor of 25 years would take a risk with concussion, with the seriousness of the injuries that go on now with concussion? … Do you want him to go back to medical school?”,” he said

Hinkley was also asked whether he expected AFL scrutiny over the matter.

“I expect they’ll ask questions around a lot of things – injuries, incidents, all sorts of things,” he said.

“But that’s a normal process for the AFL.”

The Power had activated their medical sub before the collision, after Trent Dumont suffered a calf injury. 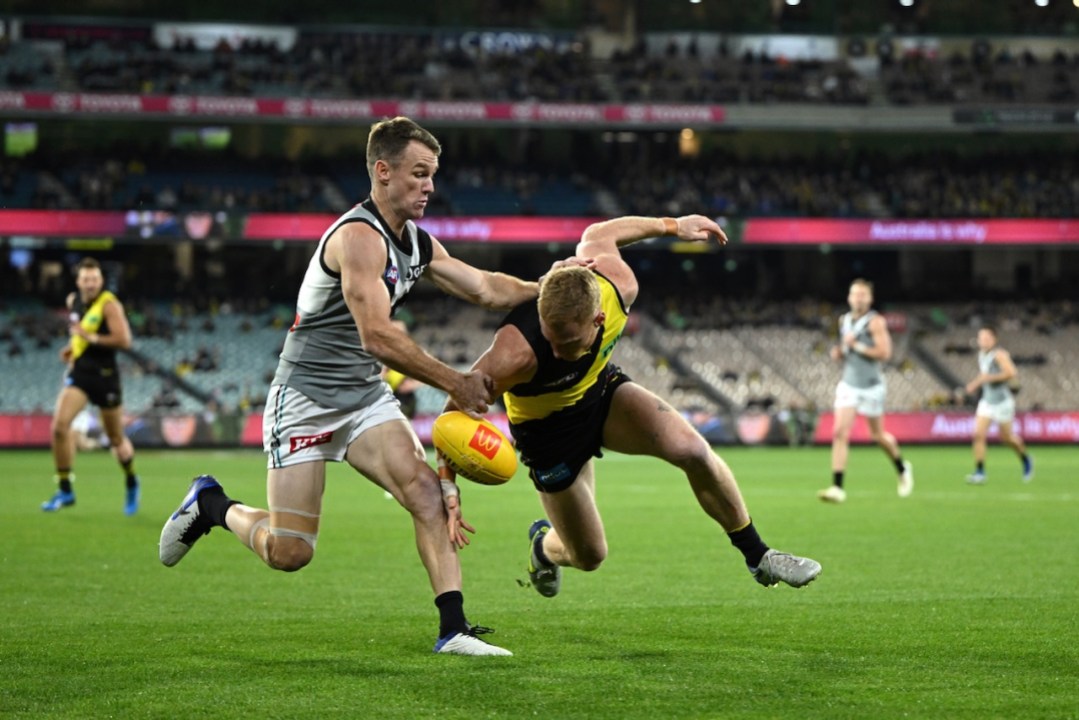 “I don’t think there’s a sport in the world that looks after their players as well as the AFL,” he said.

“You have to love that about our game – you wouldn’t see a collision like that anywhere else in the world.”

Six years ago, Port were fined $20,000, with half of it suspended, for breaching concussion rules when Hamish Hartlett was allowed back on the ground too quickly following a head knock.

But there were extenuating circumstances, with the Port chief medical officer attending to another injured player at the time.

The star Tigers utility also boosted his bargaining hand in contract negotiations with a best-afield performance.

Baker proved the difference last night, kicking a goal in the last quarter when he was moved into attack and racking up a team-high 26 disposals in their 12-point win.

Port players Tom Jonas and Zak Butters tried to tackle Baker in the final term, but he masterfully evaded them and they smashed into each other instead.

Moments after their collision, Baker set up Dustin Martin for a goal.

Just as Port’s decision not to put Jonas and Butters through concussion protocols after their head clash was the big controversy out of the game, Baker was the standout player.

“He’s just such an important player. He’s out of contract, too, so he’s not helping us.

‘He’s a wonderful player. He’s a guy that you love to coach, because you wind him up and off he goes.

“His last quarter was pretty special.”

At 173cm, Baker is one of the AFL’s shortest players, but just like new teammate Judson Clarke and Caleb Daniel of the Western Bulldogs, he proves height isn’t everything.

“We look at his size, but what we don’t see is the enormous heart of the kid.

“Our recruiters saw something, they knew this kid deserved to play AFL and what we’ve seen with guys who are short of stature, they can play the game,” Hardwick said.

The win put Richmond back in the top eight with a 7-5 record and sets up a massive game next week against Carlton.

Tigers key forward Tom Lynch will return from injury and Kane Lambert, who returned as the medical sub against Port, should also be available despite his ongoing struggles with a hip problem.

In front of a disappointing Thursday night crowd of only 21,757, the Tigers lost the lead at the start of the pulsating final term before rallying for the win.

It puts the Tigers back in the top eight with a 7-5 record, while the Power drop to 5-7.

Liam Baker was outstanding for Richmond and his move into attack late in the game was crucial, while Port’s Karl Amon had a game-high 29 possessions.

In his 200th game, Richmond co-captain Dylan Grimes blanketed Robbie Gray and at the other end, Port defender Ryan Burton was solid on Dustin Martin.

Richmond 18-year-old Judson Clarke had a dream start to his AFL career.

Clarke’s first kick in the opening term was a goal and he kicked another a few minutes later.