It was a simple question: If you had a blank sheet of paper, how would you design a national AFL competition?

The answers proved just how complicated the debate on the structure of Australia’s premier winter sports competition is becoming in the lead-up to deciding if Tasmania will finally have its own AFL team.

Or will Tasmania inherit a Melbourne-based club – in particular North Melbourne – to avoid expansion to the awkward number of 19 teams forcing an unpopular bye each weekend?

The 18 AFL club presidents will vote on the Tasmanian question in August. If at least 12 of the presidents agree to expansion, Tasmania will get its longstanding wish to be part of the national league in 2028.

Every Australian state will then have at least one AFL team. Only the territories will be shut out, although the ACT shares Greater Western Sydney. The Northern Territory is pushing for the 20th AFL licence which would clear away the weekly bye on the already lopsided fixture.

Can the AFL competition support 20 teams? Are there too many clubs (10) in Victoria? Could mergers be put back on the agenda? Can North Melbourne co-exist in Victoria and Tasmania, more than a decade after rejecting a $100 million carrot from the AFL to do such on the Gold Coast?

Every day, it is more like the AFL has set up ‘McDonald’s franchises’ across the competition

The North Melbourne to Tasmania “solution” – that annoys both North Melbourne and the Tasmanians – would keep the AFL at 18 teams and appease those who suggest Melbourne’s city hub cannot sustain nine AFL clubs.

But this is a tough sell for the AFL Commission, as history recalls. Former Crows chief executive and chairman Bill Sanders remembers 2007 when the North Melbourne president of the time, media personality James Brayshaw, canvassed his counterparts across the national league on the AFL-promoted option to co-exist at Gold Coast.

“We met for a coffee at Henley Square and I told James, ‘Take the money and go to the Gold Coast’,” Sanders said. “It was a very short meeting!

InDaily consulted from coast to coast some of the biggest and most-experienced players in Australian football – leaders who were at the coalface of national expansion through the 1980s and 1990s when there was no blank sheet of paper. It was simply expanding the old Victorian Football League.

The recommendations from this esteemed group that has experiences in AFL expansion and club mergers included:

The simple question – how to set up a new AFL? – did indeed become complicated in the search for an answer.

There certainly is unease with the structure of a Victorian-dominated AFL. Boulton and Whicker even questioned the tone of the current AFL club competition outside of Victoria. 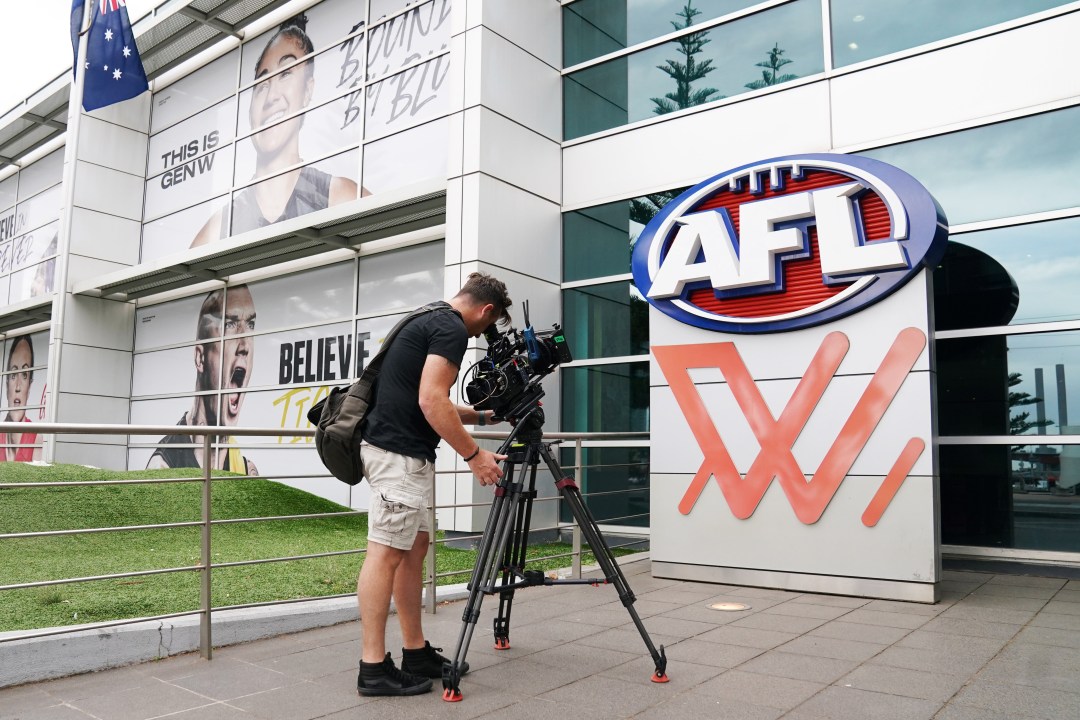 Whicker feels the AFL and its 18 clubs is losing touch with club members. Boulton is concerned the AFL has created “McDonald’s franchises” rather than clubs, mirroring the whitewash former Soccer Australia chairman David Hill undertook during the mid-1990s when the A-League was formed by creating new clubs, while wiping out the ethnic heritage of the old National Soccer League competition.

Since 1990, the AFL has built new four teams (Adelaide, Fremantle, Gold Coast and Greater Western Sydney) and taken only one from a suburban competition (Port Adelaide from the SANFL).

“Every day, it is more like the AFL has set up ‘McDonald’s franchises’ across the competition,” said Boulton, who was part of the Port Adelaide board that tried to elevate their club as South Australia’s first entry to the expanding VFL in 1990.

“And forget private ownership of AFL clubs (as is being touted for Tasmania and endorsed by current AFL Commission chairman Richard Goyder). Yes, there is upside with privatisation, but there’s more downside. Why would you buy an AFL club when the AFL Commission will own the club’s name, its players, the guernsey, the club song?”

Pridham, a South Australian who has made his personal fortune in Sydney, will be one of those 18 men and women who will vote on the Tasmania question at the club presidents’ meeting in August. He is in an awkward spot when discussing the hypothetical question on how to structure a new AFL considering his remarks would echo into the Tasmania debate.

No-one says otherwise, considering the rich history Tasmania has in Australian football. But almost everyone questions the island state’s ability to finance and support – with a population of 541,000 – an AFL team needing to work to an annual budget of at least $50 million.

If you stretch a rubber band too much, it breaks

Pridham took the blank sheet of paper and immediately answered: “(The structure of the national league) will depend on what you are trying to achieve,” he said.

“As for how many teams – the fewer teams, the more elite the competition. But you also need enough teams for an interesting competition and for game plus fan development and engagement.

“The United Kingdom has one team per 3.3 million people in the England Premier League (where seven of the 20 teams will be based in London next season).

“We are well serviced (with 18 teams for 26 million people in Australia, one club for every 1.4 million). This is why so many AFL clubs lose money. Clearly, all markets are different. If you stretch a rubber band too much, it breaks.”

Hence, the 18 AFL club presidents – while acknowleding a truly national AFL would embrace Tasmania – are nervous about expansion to 19 teams, which would then open the debate to finding the 20th team … or forcing two current AFL clubs to take on a merger, as Brisbane and Fitzroy did in 1996 to allow for Port Adelaide’s entry to the national league in 1997.

The InDaily panel picked up the blank sheet of paper and offered these models for a new AFL:

Bill Sanders (inaugural Crows chief executive, former Crows chairman and former Woodville SANFL chief executive): “If you want a truly national competition, you have to include Tasmania and the Northern Territory – and forget what it costs.

“There are too many teams in Melbourne. That is easy to say, but difficult to solve when it becomes a very emotional issue. You need a lot of understanding to complete a merger as we did at Woodville and West Torrens. South Melbourne went to Sydney – supporters were hurt at the time, but their club is better for it. Same with Fitzroy in their merger with Brisbane. They are stronger clubs.”

Greg Boulton (inaugural Port Adelaide president): “Every proposal you will get needs to be tested financially – and primarily against the money to be made on television rights.

“One option to consider is a 20-team AFL with two divisions, and promotion and relegation. No-one is guaranteed a spot in the first division with a ‘national clause’ saying there must be at least one team in each state. It is all about performance.

“If you work on needing a million people for each AFL team, you get two clubs in Western Australia, two in South Australia, two in Queensland, two in New South Wales, and recognise Tasmania and the Northern Territory don’t have the population base to drive their AFL entries.

As for Victoria, you can’t change the past. We have to remember that fans follow a club, not the AFL. If you cull clubs, you lose fans – and shrinking your supporter base is not the smartest move.”

Leigh Whicker (former SANFL chief executive): “There must be teams in each state and preferably 12 in the league; 14 at a maximum. That would be a truly national competition – and a good one.

“Two in South Australia, two in Western Australia, one in Queensland, one in New South Wales and six in Victoria. Tasmania cannot afford an AFL team. You need the clubs to stand on their own feet. I appreciate Tasmania is a rich football state, but it is not big enough to meet the demands of an AFL club.

“I don’t know the answer on how you get 10 clubs to six in Victoria. But I am concerned that the AFL is moving more and more to satisfy corporate agendas rather than have a competition that is based on clubs that are driven by their members and to their members’ needs.”

AFL financial reports include data revealing that since 2011, when the league started its northern expansion strategy with new teams on the Gold Coast and in western Sydney, the broadcasting rights have generated $3.291 billion for the league.

The AFL has spread this cash bounty with differing allowances to the 18 clubs – the most to Gold Coast ($195.9 million); the least to West Coast ($121 million); and with $123 million to Adelaide and $145 million to Port Adelaide.

“I’d keep growing the league with Tasmania, the Northern Territory, three teams from South Australia. But I would have two less teams in Victoria.

“We all want to see Tasmania in the AFL for sentimental reasons. It is a more holistic national competition with a Tasmanian entry. But we are always going to get back to financial issues. Can they generate $60 million a year to make the Tasmanian team viable and sustainable?”

Robert Walls (Carlton premiership coach and player, former Brisbane coach and Hall of Famer): “Sixteen teams, that’s more than enough for a country of our size. The product has been diluted already with 18.

“One team in Sydney; forget about Greater Western Sydney. Two teams in South Australia and Western Australia. Still two in Queensland to keep an AFL game in a growth state each weekend, even though I do worry about Gold Coast.

“One in Tasmania, for the history that state has in Australian football – even if the numbers are not great. And eight in Victoria. Just don’t ask me how to get it from 10 to eight.”

“If you are starting from scratch, you would not have so many teams in Victoria.

“Probably eight in Melbourne and the ninth Victorian team in Geelong. Nine out of Victoria; nine in Victoria. Two teams in Western Australia, two in South Australia, one in Queensland, maybe three in New South Wales, certainly one in Tasmania and none in the Northern Territory.”

The August vote of the 18 AFL club presidents will be heavily loaded with financial projections, particularly on how the size and structure of the national league changes the revenue from the broadcasting rights that are currently being renegotiated.

Myth has it that a 19-team league offers no more games than an 18-club series – and therefore no more television money.