Thousands of football fans will find their normality this weekend while returning to unrestricted AFL venues (except Perth Stadium) by clearing their lungs to appeal for a holding-the-ball free kick.

As leading AFL umpire Ray Chamberlain notes, very few of the fans (and media commentators) – in contrast to the three field umpires – have read Law 18.6 and its five sub-clauses. Nor have they had the luxury of being briefed on how this contentious rule should be interpreted.

No rule in Australian football has been rewritten as often as holding the ball since the game began in 1858. There was no “holding the ball” among the first 10 rules written at the Melbourne Football Club on May 17, 1859.

Tackling was not even included in the rules – “only when an opponent has the ball in hand in general play” – until 1866. In 1874, the first holding the ball rule compelled the carrier to “immediately drop” it when tackled. Today, dropping the ball would concede a free kick.

For 118 years the rule has been rewritten again and again. And this season there is yet another tweak to the interpretation that demands a new lens on “prior opportunity”, “legal tackle” and “correct disposal”.

Be prepared to hear much groaning from the terraces, but not the players – unless they are prepared to concede 50-metre penalties for dissent, another new interpretation for Season 2022.

It is a strange game that can have a commentator look at an incident and say: “That could have gone either way (holding the man or holding the ball).”

In recent years, the argument for rewarding the tackler with holding the ball free kicks has been championed by former Hawthorn coach Alastair Clarkson and senior graduates from his academy, such as Brett Ratten and Damien Hardwick.

Clarkson, after a cup of coffee with AFL chief executive Gillon McLachlan in 2020, remarkably had the league boss make a rare mid-season adjustment to the interpretation of the holding the ball rule. Umpires were told to take a tougher stand against the ball carrier.

But this edict – which later embarrassed McLachlan for seeming to act on Clarkson’s protest – did not hold last season when St Kilda coach Brett Ratten was seething with the umpires who awarded just three free kicks for the 85 tackles made against Geelong.

“Our players,” notes McLachlan, “are so skilled and so quick that they will ride the tackle. They have had prior opportunity, so they should be penalised.”

Such is the plan this year with players being on notice since January when the league declared no “material rule changes”-  but a new interpretation of holding the ball:

Umpires are to be “less lenient towards players who have had prior opportunity and do not immediately and correctly dispose of the ball”.

Players who “duck their head prior to being tackled” will be penalised rather than rewarded with a “high-contact” free kick.

The interpretation changes are the first mark on the law book made by new AFL football boss, Brad Scott. The Brisbane premiership hero and former North Melbourne coach makes the rule that has sparked more than a century of debate among players and fans seem very simple when he says: “There are two key elements to holding the ball.”

“The umpires are looking to make sure a legal tackle is applied. If it is, the ball carrier has to either break that tackle immediately or dispose of the ball. If he doesn’t, it is holding the ball.”

Prior opportunity is still the weak point of this rule, because it is subjective. Assessing the legality of a tackle should not be loaded with much doubt. Nor should judging if a player has correctly handpassed or kicked.

What could go wrong? 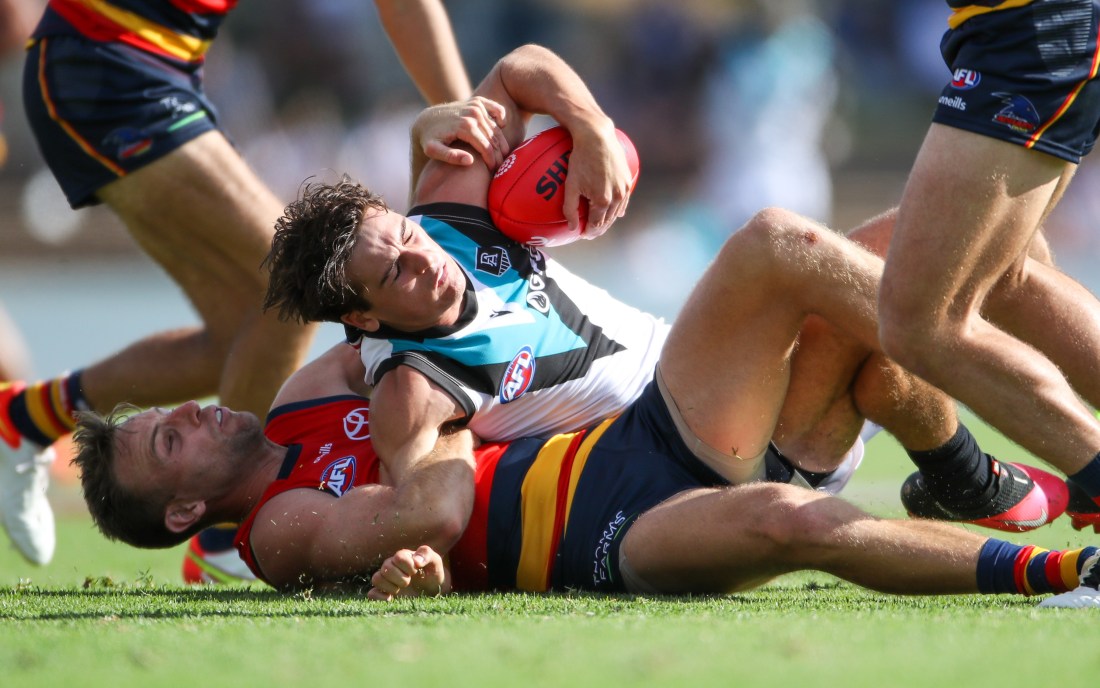 “The umpire (is behind the tackle) and can’t see the ball,” SANFL umpiring director Shane Harris told InDaily.

The umpire will then call “play on” while thousands of frustrated fans will rise from their seats yelling: “BALL!” And then groan in chorus if there is no free kick for the tackler.

Prior opportunity is the ultimate “grey area” of a rule the AFL wants to have umpired with greater vigour and consistency. The new interpretation will regard players who “evade, fend or duck” the tackler as having “prior opportunity to dispose of the ball”.

Australian football has been tormented by the holding the ball rule since its pioneer days. It has been rewritten decade by decade with “prior opportunity” being a hot topic during the game’s refit during the 1920s and 1930s.

In 1938, dual Brownlow Medallist Ivor Warne-Smith wrote in his newspaper column that the game of Australian football – “our very own game” as the Sydney-born Melbourne captain called it – was “at the crossroads” with its rules, umpiring and the vexing holding the ball law.

There was the suggestion in 1938 that tackling from behind be outlawed.

And Warne-Smith suggested prior opportunity be defined as “the man in possession is allowed two seconds to rid himself of the ball after a tackle”.

Hardwick, the three-premiership coach at Richmond, would have “prior opportunity” completely removed from the holding the ball rule.

“Prior opportunity just makes the umpires’ job harder,” Hardwick said. “Scrap it. Put the pressure on the players. The players will adjust really quickly.

The game’s best and fairest player according to the umpires is Port Adelaide vice-captain, 2021 Brownlow Medallist Ollie Wines. He has astutely read the AFL’s intent with the new interpretation with holding the ball. During the summer, the bullish midfielder took to honing his game by sharpening his disposal by handball and, even with his solid 98-kilogram frame, being better in “driving through” tackles so as to avoid being caught holding the ball.

But despite two practice matches and the appearance of AFL umpires at Port Adelaide training sessions at Alberton, 27-year-old Wines will enter Saturday night’s season-opener against Brisbane at the Gabba with doubts on how the whistle will be blown on holding theball.

“When we first had the presentation (from the AFL in January) we noted they would be really hot on it,” Wines said. “But we have not seen it umpired like they presented; they have been going for other things, like 50-metre penalties for any back-chatting.

“When we were presented the rules, with the change being you would not have much of an opportunity to get rid of the ball – you have to get rid of it as soon as you get pinged – we immediately trained for that. But during the intra-club trials with umpires taking charge, it has not been a big issue. It has been pretty similar to the past.”

Wines’ first thought on how he would need to change his game was to think: “Of not taking on the tackler at all. Even if you did – and you were looking around for your next option – that is going to be holding the ball. That is the way it was presented to us. But it has not turned out that way, so we have not had to change too much.”

At Adelaide, where a former Welsh rugby team trainer has worked drills to make the Crows stronger in their tackling, club champion Rory Laird has, in contrast to Wines,  noted the umpires are “super quick with holding the ball” calls.

Laird adds there is almost a fundamental shift in a game that is supposed to protect and reward the player who makes the ball his object. Now it might be better to concede first possession, to ultimately win the free kick by solidly tackling an opponent.

“You would need to be pretty smart to do that,” Laird said. “Most players are still ‘see ball, get ball’. I still will be 100 per cent at the footy.”

Despite there being one code of Australian football, the sport does work to differing interpretations from league to league.

How will the fiercely independent SANFL deal with the AFL’s new interpretation on the contentious rule?

“We have been where the AFL wants the rule for the past couple of years,” Harris said. “We have been a lot tougher on the player with ball – when the ball is free and can be handpassed or kicked – for some time now.”

The SANFL’s aim was to open up the game with less stoppages from ball-ups called by the umpire when the match official has not awarded a free kick, for holding the ball or holding the man. There has not been an increase in scoring, as the SANFL had hoped.

“But we have been more consistent with holding-the-ball calls,” Harris said. “And this interpretation is much easier to umpire, provided the umpire can see the footy during a tackle.”

AFL umpires are expected to use the whistle more often this season. In the past five seasons (excluding the COVID-truncated 2020 season) the umpires have called between 7788 free kicks a year in 2017 to 8500 in 2018. This is an average of 40 free kicks a match.

This is less than half the 83 free kicks awarded in 1977, when the AFL was a 12-club competition totally based in Victoria rather than today’s national league of 18 teams. The 1977 season is famous for one game – Essendon hosting South Melbourne at Windy Hill in suburban Melbourne – having a record 132 free kicks (67 to Essendon and 65 to South Melbourne). All but three of the 40 players on the field were handed a free kick in  match decided by 12 points.

It also was the era when a player – as made famous by Richmond great Kevin Bartlett – would bounce the ball just as he sensed he was to be tackled. The rule punished the tackler for holding the man. Today, the rule has the umpire call this moment as holding the ball.

Hawthorn legend Leigh Matthews takes issues with the fans and critics who count how many free kicks are awarded in a match.

“This annoys me. I hear this commentary, ‘We don’t want many free kicks’,” Matthews  said. “This is lunacy.

“Is the game going to be better with no free kicks? Let’s look back to 1989 – best Grand Final ever played, probably – and there were 50 free kicks. Football is better when the umpires are prepared to blow the whistle.

“It will create controversy because you will have people disagree with the decisions. But this thought that we should ‘let it go, let it go’ with the umpires not blowing the whistle is total lunacy. I cannot understand that philosophy that some seem to espouse.”

Matthews contradicts the view expressed by Warne-Smith in 1938 when he became concerned with the high count of free kicks in Australian football. He wrote: “In our present game we argue and curse an umpire because he blows a whistle too frequently.

“Which would you have? An afternoon of a tense, thrilling and argumentative struggle or one spent in peaceful, soothing enjoyment of an open, fastidious game in which no player is likely to bump the other?”

That question – asked over 80 years ago – remains relevant today.