The Adelaide Football Club cult figure courted the superstition of bad omens when he donned the No.13 guernsey. He has survived numerous controversies and challenges but is now amid his greatest, over the racial abuse of an Aboriginal footballer.

Walker, 31, is halfway through a six-game ban for his comments towards North Adelaide and former St Kilda midfielder Robbie Young at Prospect Oval in mid-July.

No-one can condone Walker’s remark, even if today there are those seeking to defend Walker by saying he was angered by the alleged actions of Young towards Crows midfielder Matt Crouch during the first quarter of the SANFL match.

Walker was a spectator, not a player, at the game and made his remark about Young while speaking to Crouch at the quarter-time huddle.

If the AFL, the first Australian sport to develop a racial vilification code, is to win its determined battle against racism it needs to ensure Walker is not cast aside from Australian football while he attempts to redeem himself and return to the game.

Exclusion by shame is no less vindictive and deplorable than exclusion by racism.

Walker’s comments against Young have been and must be condemned.

Back in 2017 he united the Adelaide and Port Adelaide football clubs to stand against racism amid attacks on Eddie Betts and Patrick Ryder during  Showdowns.

Walker argued racial vilification from fans should be met with lifetime bans from the game. Today – as he undertakes education on Aboriginal and Torres Strait cultures as part of his AFL-imposed penalty – Walker is to learn exclusion is not the answer.

The first AFL player called to mediation for racial vilification was Collingwood ruckman Damian Monkhorst over remarks towards Essendon legend Michael Long in the Anzac Day clash at the MCG in 1995. Monkhorst remains in top-level football as an assistant coach at AFL club Hawthorn. He also manages a successful business in Melbourne.

Racial vilification has moved from the terraces (where fans are being called out) to Twitter, Facebook and Instagram, with three English players hounded after missing penalties against Italy in the recent European football championship final at Wembley. Social media giants are being urged to demand identification before opening accounts to help track down and prosecute those posting racial abuse.

For Walker, his off-field prospects with media, a book launch at the end of his football career and commercial endorsements are diminishing while his case is heavily debated amid a divided public.

His biggest challenge is not winning back the faith of the fans or players who applauded him on Saturday night while he collected his award as Adelaide’s leading goalkicker. 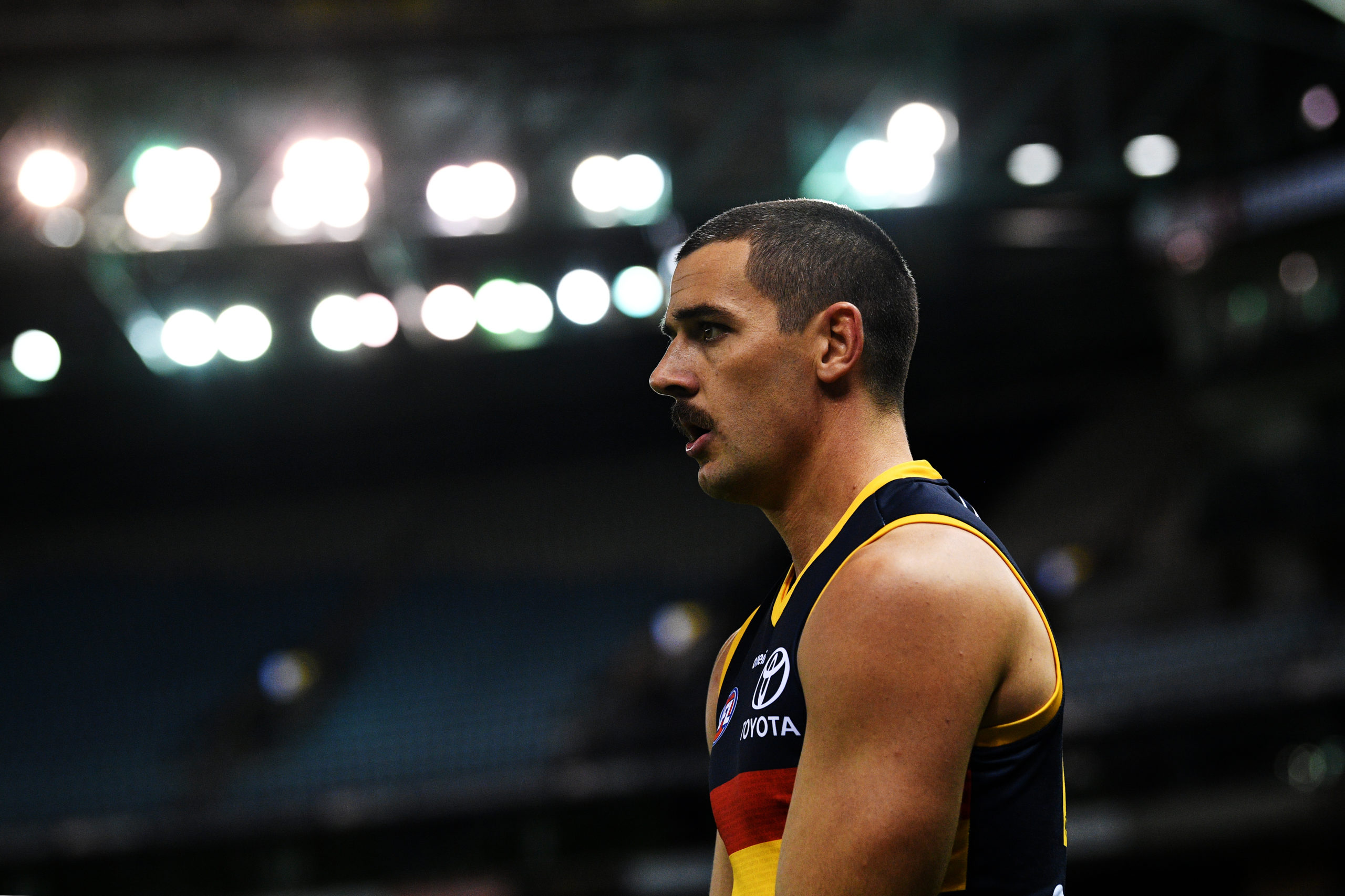 Walker needs to regain and hold the trust of Adelaide’s Indigenous players – one of whom expressed concerns when Walker met Crows players a fortnight ago – and those across the national football competition.

Adelaide is understood to have reached out to Port Adelaide and Hawthorn premiership hero Shaun Burgoyne, the only Indigenous player to reach the 400-game AFL milestone, to help Walker on this front.

Burgoyne is the brother-in-law of Adelaide’s AFLW premiership captain Erin Phillips, who last month described Walker’s remark to Young as a “huge stain on our club that may never go away”.

Club champion midfielder Rory Laird is endorsing Walker’s return to the club and his right to take up his playing contract next season.

“A lot of guys have seen the processes Taylor has put in place with further education,” Laird said. “It’s now more around the Indigenous players at our club: Wayne Milera, Ben Davis, Tariek Newchurch, seeing how they handle him coming back.

“Taylor is in constant dialogue with the people within the club through not only the players but also (club indigenous liaison officer) Jeremy Johncock and the wider AFL community, such as Eddie Betts.

“It is more for them to have a conversation with him and say what they would like him to do. He also wants to go to (Indigenous) communities with his next steps.

“The majority of the player group – like me – we have accepted his apology.”

Walker’s strength to overcome this last hurdle to a memorable swansong as an AFL player next season, and a path to a post-playing career in the game, will demand more than he has shown while enduring heavy challenges during the past 15 years.

The lad from Broken Hill first overcame Crows’ senior coach Neil Craig’s reluctance to play him in the AFL in 2008,  while Walker made Norwood fans rise from their seats in excitement with his booming, match-winning kicks at half-forward.

Not even a Rising Star nomination impressed Craig, who wanted to see his “defensive efforts” improve – and, as fate would have it, Walker was later suspended twice for tackling.

In 2011, Walker hit the headlines for having a beer with mates in the crowd during a Port Adelaide match at Football Park after being dropped from the Crows’ AFL line-up. Collingwood premiership captain Tony Shaw and Brownlow Medallist Gerard Healy, from the television commentary booth at West Lakes, questioned his commitment to the game and his team.

Later, Walker’s season was wiped out after his fifth match of the premiership season when he ruptured the anterior cruciate ligament in his right knee.

In 2015, Walker had to help carry a team emotionally battered by the murder of its new coach, Phil Walsh, midway through the season. Walsh so much admired the inspiration “Tex” had on his team-mates that he chose him as club captain. For two years, Walker’s peers across the 18-team AFL national competition admired him so much that they named him “captain of the year”.

At the start of Walker’s 11th season in the big league in 2019, Memorial Oval at Port Pirie seemed well named for those ready to write off a player with extraordinary resilience and thick skin to the critics’ eagerness to refer to his career in the past tense.

Walker did not score against Port Adelaide in that summer Showdown on March 2. He appeared unable to compete in aerial contests – a prime function of a key forward – while his arms did not readily lift beyond his shoulders.

And Walker was charged with rough conduct and fined $3000 for his tackle of Port Adelaide defender Riley Bonner in the first term of the pre-season match. Not even a protest to the AFL tribunal spared Walker from writing a cheque. After this, Walker was repeatedly criticised for seeming timid and reluctant to enter physical contests in AFL matches.

There were moments during the 2019 AFL home-and-away season, in which Walker played all 22 matches, that the under-performing key forward seemed to hold his place in the line-up simply because the Crows match committee struggled with the thought of dropping the team captain.

And 2020 was not much better even though Walker finished the season with the Adelaide Football Club’s record for all-time goals, beating the long-standing mark of 440 goals set by another misunderstood Crows hero, Tony Modra.

This storyline, built on defying the stinging reviews from a heavily scrutinised career, made Season 2021 a tour de force for Walker. Until last month, when he made a racial slur at Prospect.

Walker might have won the Malcolm Blight Medal as club champion had he not been banned from the last three games. He finished equal fourth – his first top-10 ranking in the award – 20 votes behind two-time winner Laird, butplayed 17 games compared with Laird’s 22.

Walker certainly missed his first All-Australian selection. He also was denied a nomination in the 40-man nomination squad that included Sydney power forward Lance Franklin, who had slightly inferior numbers to Walker while both played 17 home-and-away games and kicked 48 goals each in Season 2021.

Walker was named on the bench in the Adelaide Football Club all-time time for the club’s first 30 years (1991-2021) despite being the Crows’ greatest goalkicker (489 goals in 220 matches). The centre half-forward role many thought belonged to Walker went to 1997-98 premiership key forward Matthew Robran.

The one award that could not be taken from Walker was the 2021 leading goalkicker trophy for his 48 goals, which he personally accepted.

“It was a great first step to come back in the public’s eye,” Laird said of Walker’s presence among 600 at the club champion black-tie dinner.

“They are accepting of how he went through the process of educating himself further and the steps he can take in communicating with the Indigenous people at our club and the AFL as a whole.”

The Adelaide Football Club is caught in the fall-out by outlandish remarks such as they should have kept the case in house, when AFL regulations demand an independent and confidential investigation by its integrity unit. The Crows official who lodged the report is labelled by some as a “dobber”, when his actions should be applauded as part of a zero tolerance attitude toward racism. And Adelaide is accused by some of “abandoning Walker” and the club is threatened by petitions from Crows fans threatening to tear up their membership tickets if Walker does not play next season, when chairman John Olsen says his club must show a “duty of care to everyone”.

While Walker last week – in his first and only media appearance – declared playing next season is “not a priority” while he focuses on mending broken bridges at his club and in the community, there are the reassuring words of senior coach Matthew Nicks.

In highlighting the career-best form of senior players Laird, Ben Keays, Paul Seedsman and Walker, Nicks said: “We will need all four of you next year.”

This remark drew applause, another vote of endorsement from the major backers and supporters of the Adelaide Football Club.

Walker’s case is the first use of the AFL racial vilification code in a decade, following the four-game ban of Justin Sherman at the Western Bulldogs in 2011 for his remarks to an unnamed Gold Coast player.

So where is the game in its fight against racism from within the boundary line where players such as Betts have become frustrated and exhausted campaigners?

“I’d like to think we are in a good space on the field,” Laird says. “But there is a lot of social media stuff from people who find it easier to hide behind fake accounts. People make accounts and then burn them.

“But the AFL industry is in a pretty good space. Eddie (Betts) has been vocal in saying there is still work to be done.”

Walker is increasingly likely to be part of Adelaide’s on-field campaign next season. But the question of where Australian sport – and society – ends racism is not answered by Walker’s presence or absence from football fields.

His absence would only highlight how much work still needs to be done in an AFL system that thought it was the leader of the pack in Australian sport.