Port Adelaide Football Club members on Friday were called to arms for the last week of AFL club membership sales.

But the email saying the club is “closing in on our all-time club membership record” told just half the story.

Port Adelaide knows the race for bragging rights with the Adelaide Football Club as “the No.1 team in town” has become much tighter after the Crows gained a surge in membership sales in late May, thanks to renewed fan enthusiasm following the one-point win against the previously unbeaten Melbourne at Adelaide Oval.

Earlier updates from AFL House in Melbourne had signalled Port Adelaide was well ahead of the Crows in the chase of the larger local membership base for just the second time since Adelaide became a two-team market in 1997.

Beyond the surprise win against Melbourne helping Adelaide membership sales, a strong grassroots campaign was launched last month with club president John Olsen saying: “We have opened more and more of the inner sanctum experiences to our members.”

Port Adelaide is publicly declaring its unaudited membership number is 59,861 – well ahead of the record set in 2018 with 54,386 after the annual AFL audit. The check at headquarters retains only memberships that have listed a residential address (rather than the mailing list from a corporate backer) and those that offer a game-day ticket to at least one match. 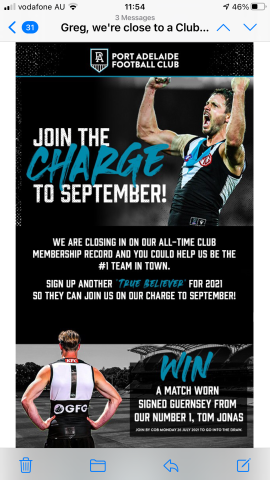 Adelaide, for the first time in many seasons, is not publicly spruiking a membership figure.

“We have well exceeded last year’s numbers,” Silvers said. “We will know on August 1 (after the AFL audit), but we are tracking for just over 58,000.

“Which is a massive increase on last year and a strong response after all we have gone through over the past 18 months.”

In Adelaide’s case, it is not just a worldwide pandemic that dented usually solid membership sales. Another factor was the club’s fall to last of 18 in the national league and collecting its first wooden spoon in 30 seasons of top-level football competition.

“We have had some challenging times,” Silvers said. “We finished 18th last year when we lost our first 13 games. We have had our ups and downs (this year), but we’d just love our members and fans to stick with us – members are the lifeblood of the club.

“For them to stand by us is just special. They are seeing the positive signs – we will get better over the years to come.”

Membership figures have been a status symbol offering as much off the field in bragging rights as those won on the park in the Showdowns played between the Adelaide and Port Adelaide football teams since 1997 when South Australia became a two-club AFL market.

Port Adelaide’s AFL membership began at 35,809 in 1997 and has wildly fluctuated, particularly during the so-called “tarps era” around 2010 when large plastic coverings blocked out spectator bays in the concourse terraces at Football Park while fans turned away from the poorly performing club.

Port Adelaide’s record low for membership sales was 29,092 in 2010. That season also marked the greatest gap in the membership count between the two SA-based AFL clubs – 16,453 (while Adelaide had 45,545 members).

While the membership figures were a hotly contested status symbol during the pre-COVID seasons, the pandemic has all 18 AFL clubs fully appreciating their members in a new and perhaps more relevant light.

“This year, we have been more conservative with our budgets and luckier to have played more home games with crowds at Adelaide Oval,” Koch said. “But we only survived last year because of the loyalty of our members and commercial partners.

“We will be eternally grateful to our members for standing by us.”