“Buckley’s an arrogant bastard,” said the bloke in the bar last week as discussion turned to whether the Collingwood legend should be replaced as coach.

“I know blokes who played with him, and they say the first thing he used to do after a game was buy The Sporting Globe to see how many kicks he’d got.”

It was just another version of the many negative anecdotes told about Nathan Buckley in the almost 30 years since he started playing at football’s highest level.

The Sporting Globe was a Melbourne institution; a sports newspaper that was printed on Wednesdays and in the evening on Saturdays with all the stats and results from Saturday’s matches.

The problem with the bar-room story is that Buckley started in the AFL in 1992 and the Saturday edition of The Sporting Globe ceased production in 1979.

It’s the same with the FIGJAM story, still told in pubs and clubs today. It goes that Buckley was known among team mates as FIG JAM, an acronym for Fuck I’m Good, Just Ask Me. The story arose in print in 1993 (Buckley’s first year in the AFL), written by Melbourne journalist Jon Anderson, who later admitted to Buckley that the source was a bloke in Melbourne who knew a bloke in Brisbane who had told him. In other words, third-hand crap.

Throughout his career, Buckley’s football excellence, brought about by deep commitment and an intense drive to succeed, was misinterpreted by those who envied his talent.

The stories that grew via pub talk became established fact. They are also the polar opposite of the truth about Nathan.

Our paths crossed many times, mostly in Darwin where we both lived and were involved in the Northern Territory Football League, he as a player and emerging star and me as a commentator and administrator where I served on the board of the NTFL with Nathan’s father Ray.

Ray was a real estate valuer and he’d worked in Canberra, Brisbane, Adelaide and Darwin and was himself a handy footballer. He played for Woodville in that club’s formative years alongside some big names in Australian football; Malcolm Blight, Ralph Sewer, Ray Huppatz, Bob Simunsen, Noel Teasdale.

The young Buckley wasn’t an obvious talent in the early stages, because he was very slight for his age and as he has often reflected, was one of the the shortest kids in the school class photo.

His talent was the result of sheer hard work and it delivered a SANFL premiership with Port Adelaide in 1992, a Jack Oatey Medal and Magarey Medal. 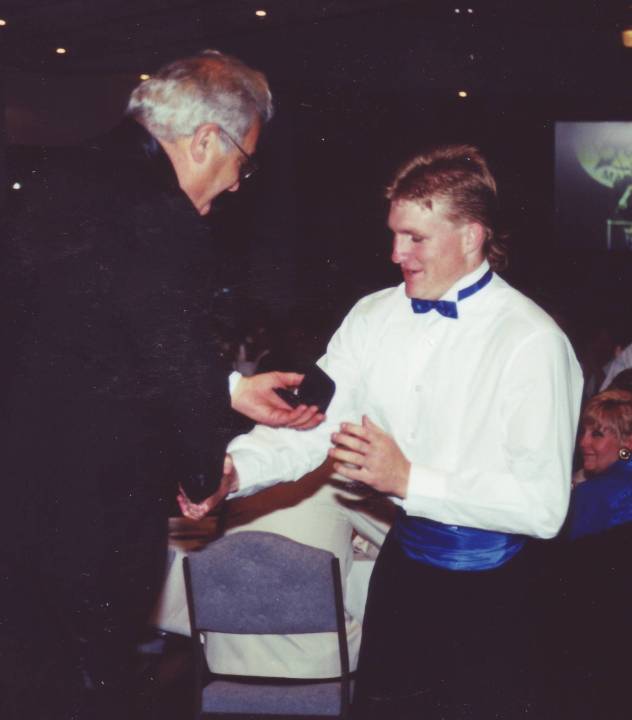 Buckley went on to claim six Copeland Trophies for Collingwood’s best and fairest, a Norm Smith Medal and seven All Australian honours, and was awarded a Brownlow vote or more in one third of the matches he played. 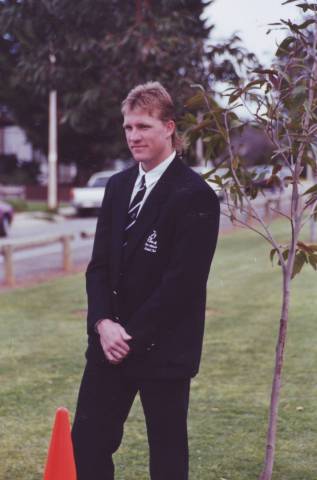 For local fans, Buckley notched up 22 Brownlow votes against Adelaide alone, which is probably more than most of that club’s players had in their careers.

Nathan Buckley and his family believed in hard work and giving to the community. It’s shown by the voluntary service his parents Ray and Karen, gave to football, community nursing and finding time to help others.

When my great friend and journalist, the late David Nason, died 10 years ago there were some in his family who had heard that David played football with Bucks at Southern Districts. The family member wrote to Nathan via the Collingwood Football Club and got a quick response to confirm that they were indeed mates and played in a side that also included  AFL stars Adrian McAdam and Allen Jakovich. The response was read out at the funeral, including how Buckley had learnt so much from those he played with.

Years earlier, and not long after his Magarey Medal and SANFL premiership win, we bumped into each other on North Terrace. With me was politics lecturer and occasional political commentator John Hepworth. Nathan was keen to hear about politics and John was keen to talk footy, so we stepped into a nearby bar and enjoyed a long conversation. Buckley was interested in other worlds beyond football and was studying architecture at the time. He has always had a thirst for learning.

One of our more recent catch-ups was at Melbourne airport where the Collingwood team was getting ready to fly to Sydney for a match against the Swans. He came over to our table and sat down for a quick chat, introducing himself to my wife Louise as a “friend of Kevin’s from Darwin”. Louise wondered after he left why people had been staring at us. Louise’s knowledge of AFL is on par with my knowledge of quantum physics.

Earlier this year I caught up with Ray and Karen Buckley and talk turned to the recent loss of a famous Tiwi Island teacher and footballer, Patrick Puruntatameri. Karen said that the “vultures were circling” around Buckley’s tenure in the top job.

It’s been interesting to see how he handled himself as the calls got louder and the old stories of arrogance started to surface. Watching his press conference on Wednesday would give a much clearer view into the man who had spent 27 years in the service of the club. He talked about the privilege of playing and coaching and the “interests of the club and its supporters”.

The depth of his character means that he won’t be tormented by having not won a premiership for the Pies, but will appreciate the extraordinary journey from skinny kid, to All Australian and Collingwood legend.

He has added a depth of respectability to a sport that needs more people of his grace and intellect.

I have enjoyed every moment of his football career, from the juniors debut at Districts in 1988 to the day in 1991 when I was in town and went to Alberton to see his irresistible 5.5 goal effort for Port Adelaide reserves, right down to the last minute of his press conference.

It’s worth remembering that Buckley debuted for Port Adelaide’s SANFL seniors against West Adelaide in late 1991, where Westies had a young bloke at full forward also playing his first senior game; Tony Modra. He hasn’t got a premiership either, but remains Adelaide’s most loved player.

Kevin Naughton, an Adelaide journalist, is a Collingwood tragic.