The league issued a statement about noon confirming it had reviewed and not approved Port Adelaide’s request to wear the black and white striped jumper in the May 8 Adelaide Oval match.

“In 2019, the AFL, Port Adelaide and Collingwood came to an agreement that allowed one-off approval for the ‘prison bar’ guernsey to be worn in Port Adelaide’s home match against the Adelaide Crows to celebrate the club’s 150th anniversary. 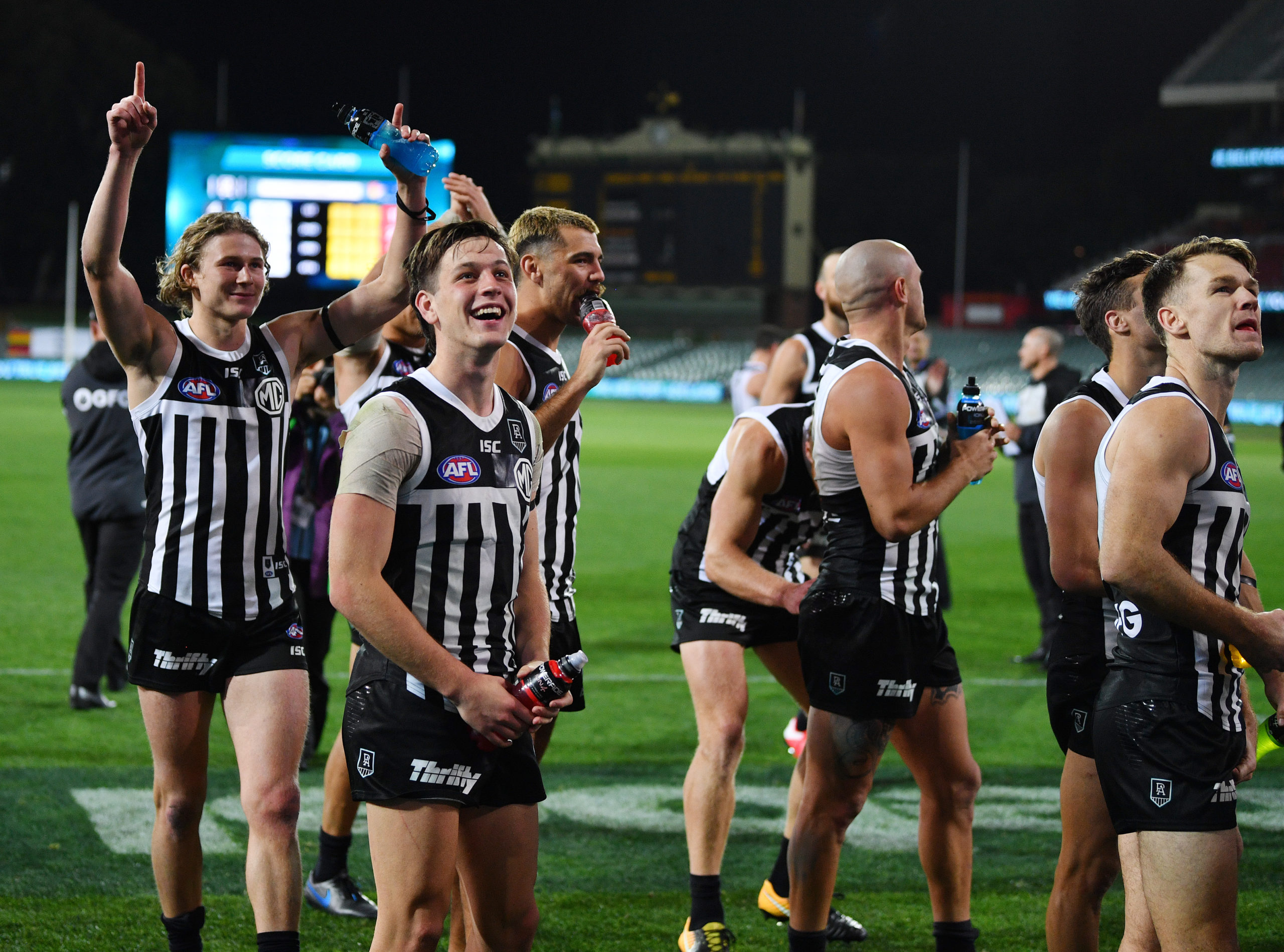 The Power wore the guernsey in last year’s Showdown, in front of a limited crowd. Photo: David Mariuz / AAP

“That agreement, signed by all parties, stipulated the guernsey was specifically approved for Port Adelaide’s use only for that single match in 2020 and Collingwood’s approval did not bind it with respect to any other future proposals by the Port Adelaide Football Club in respect of the guernsey.

“Collingwood Football Club has made it clear that, at this time, it does not agree to further use of the guernsey by PAFC including in ‘Showdown’ matches against Adelaide Crows.

“On that basis, and consistent with the arrangements that have applied to all previous instances of use of the ‘prison bar’ guernsey by Port Adelaide since the club joined the AFL (i.e. with the approval of the AFL and Collingwood) the AFL does not grant permission for the guernsey to be worn in Round 8.”

In a statement, Port Adelaide chairman David Koch said the club was “extremely disappointed with this decision”.

“Port Adelaide signed an agreement with Collingwood in 2019 to wear the prison bars guernsey in our 150th anniversary home Showdown in 2020. At the time, both parties were unable to reach agreement regarding ongoing use of the prison bars and therefore deferred consideration for future use to a later point in time. That’s exactly what we have been trying to do for nearly 12 months now,” Koch said.

“We also note that the AFL has reached today’s decision based on the existing signed agreements in place and refer to the 2019 agreement only.

“There is no mention of the 2007 agreement also signed by all parties providing Port Adelaide with the option to wear its heritage prison bar jumper once per year in home AFL heritage rounds. Port Adelaide signed that agreement in good faith.”

He said as the AFL owns the intellectual property rights to all its clubs, “this is a decision the AFL can make independently in representing what is in the best interests of the game and all clubs”.

“This is a decision for the fans, the most important stakeholders in our game – to treat our fans and the heritage of our club in this way is disappointing,” he said.

“Our frustration sits squarely with the AFL, not Collingwood. We believe our request is reasonable. This issue isn’t just about Port Adelaide. It is about the passion and connection that all fans have for their clubs.”

He vowed the issue “isn’t going away”, saying: “It is too important to our people and our club.”

Premier Steven Marshall weighed in on the decision this afternoon, labelling the AFL’s call a “Victoria-centric decision”.

“Love them or hate them, the Port Adelaide Prison Bar jumper is iconic with South Australian football,” Marshall posted on Twitter.

“We play in a national competition and it’s time that the full history of one of our two great AFL clubs is fully recognised and celebrated.

“I stand with the Port Adelaide Football Club in calling for the AFL to overturn its Victoria-centric decision.”

Before the decision was taken, Koch had revealed the AFL would dock his club premiership points if it took the field in the prison bars guernsey without the league’s consent.

Asked on FiveAA this morning whether the club was prepared to wear the guernsey and find out the punishment later, Koch said: “It’ll cost me points, I did ask that”.

“I said I’m happy to pay a fine, I’ll just bloody wear the thing, and they said ‘we’ll fine you and take points off you’.”

Koch said the penalty would be four premiership points for each game the guernsey was worn in without approval.

It comes after the outspoken Port chairman released a statement on Wednesday labelling it “ridiculous” for the AFL to have not reached a decision on the matter yet.

“We first approached the AFL on this matter two years ago in the lead up to our 150th anniversary season,” Koch said.

“To think we are 10 days away from the Showdown and still waiting for a response is totally disrespectful to our fans and our club.

“The AFL own the intellectual property rights to all AFL clubs, and therefore this is a decision the AFL can make independently in representing what is in the best interests of the game and all clubs.”