Adelaide has appointed the Hawks’ Chief Operating Officer Tim Silvers as the club’s new CEO, replacing Andrew Fagan, who revealed in January he was bowing out of the role.

Silvers has held a range of finance-related positions at Hawthorn since 2004, and was briefly interim chief executive in 2017, until the club appointed Tracey Gaudry – who ultimately stood aside after just five months in the role.

One of the lower-profile of the names linked to the vacant Crows role, Silvers nonetheless meets Adelaide’s brief, with a strong commercial acumen combined with experience in the football industry, with chair John Olsen dubbing him the “ideal administrator for the club’s current situation and its future direction”.

Olsen told media it was an “important day in the journey of the Adelaide Football Club”.

“We’ve conducted a very thorough and rigorous search and the feedback in our inquiries has been unanimous,” he said.

“Tim is a passionate dedicated, value-based person whose focus and past has been closely aligned with the football industry in Australia.”

He said Silvers would bring “a wealth of talent required for the club moving forward in the priorities that we have”.

Silvers said he wanted to make the club a place to “pursue excellence both on and off the field”, declaring he understood “what it means to be part of a successful culture”.

“I am determined to make this club the best it can possibly be,” he said.

“The Crows are such a significant part of the South Australian community, and my family and I can’t wait to officially call Adelaide home.”

He said strengthening “the connection” the Crows’ supporters and members have with the club would be a priority.

Silvers, who joined Hawthorn at the beginning of its own rebuild that culminated in its premiership dynasty, said Adelaide Football Club was “such a big brand, such a big club, with a massive membership base and so many fans”.

“On-field there’s been some successes… and some challenges over the last two or three [years],” he said.

“What I’ve noticed from afar is the club’s undertaken a process to set themselves up for their next era of success… what I see, and why I see this as such a wonderful opportunity for myself and the club, is there’s a new start.”

He said the recent appointment of new personnel, including Olsen, coach Matthew Nicks and football boss Adam Kelly provided an opportunity to “reshape and remould this club for the future”.

The Crows are rebuilding on-field and off, with an AFL list revamp and a new home base close to the city the club’s most pressing projects in the short to medium term.

After the Adelaide City Council last night voted unanimously to reject any push by the Crows to build administrative infrastructure on the city parklands, Olsen today conceded that option had been “eliminated now and we simply move on”.

“We have a clear indication from Adelaide City Council about what’s acceptable to them and what’s not,” he said.

Asked the Crows preferred site now, he said: “Well, it’s not in the parklands!”

Olsen earlier said in a statement that “having been part of a successful era at Hawthorn, Tim has an intimate working knowledge of what it takes to deliver sustained success at the elite level”.

“We conducted a thorough and rigorous process and the feedback was unanimous – he is a passionate, driven and authentic values-based leader who has a great understanding of the football landscape,” he said.

“He also has a proven track record of delivering strong financial and commercial results, and has been a key member of Hawthorn’s executive team over a long period of time.” 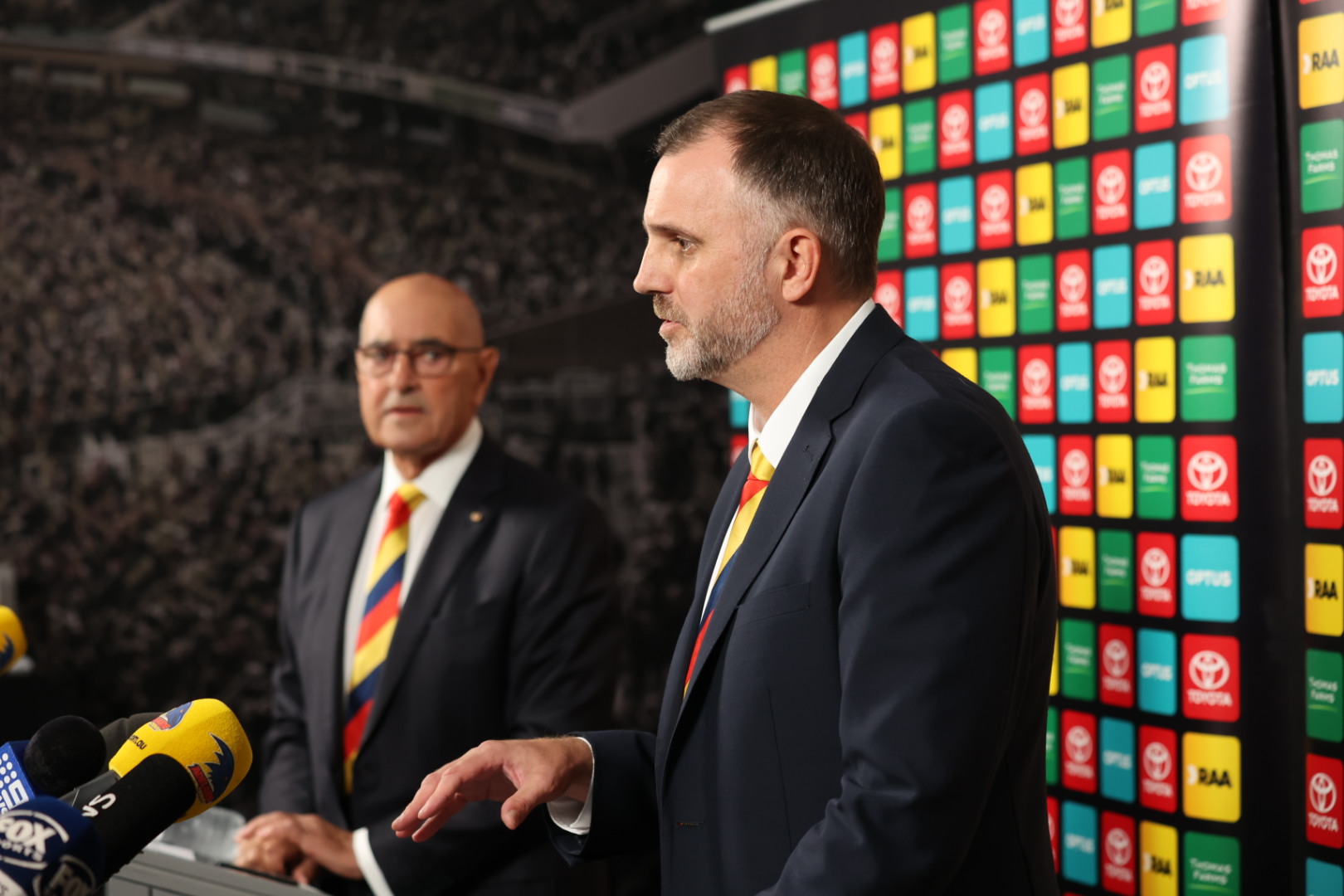 Olsen said the club’s push to build a new headquarters was “gathering momentum” and Silvers “has the experience and skills to head up the transition, having been the project lead for the Hawks plans for a Dingley training base”.

He said Silvers would oversee a review of non-football commercial investments, including eSports and the Giants baseball team.

“We will look at those business units of the club… are they performing, are they delivering?” he said.

Silvers will begin in the role before the Crows’ men’s side open their season against Geelong later this month.