AFL chief executive Gillon McLachlan opened the Zoom link to Adelaide. He and his executives saw on their screens the view from the northern mound of Adelaide Oval, the shell-like pavilions to the left and right, the Riverbank Stand at the end of a perfect green field all set against a bright blue sky.

It is the view millions of Australians could have seen – some will say “should be seeing” – next weekend, with the first AFL grand final played outside Victoria.

“It could not have been a more beautiful day – or a more impressive image,” says Adelaide Oval Stadium Management Authority chief executive Andrew Daniels.

“You could see the AFL executives lift their heads and open their eyes wider… we showed them we had the best venue for the grand final.”

Adelaide Oval is on standby for the AFL grand final that – all going to plan in these uncertain times – will be played at the Gabba in Brisbane as a tradition-breaking night match next Saturday.

The Queensland venue with 37,478 seats has less capacity than Adelaide Oval (50,000 seats); it is not as picturesque nor does it create the amphitheatre atmosphere that has made Adelaide Oval an imposing sound chamber since its redevelopment for AFL football was completed in 2014.

But the AFL Commission’s agenda demanded more than just a venue and a picture-perfect image. The AFL, in language that mirrors that of Olympic leaders, also wants a “legacy” – and next week’s grand final allows the commission to seek new facilities for Australian football, particularly for the Brisbane Lions, in a rugby heartland.

“I really wanted this grand final; we gave it our best shot,” says Daniels. “We did South Australia proud with our presentation. It was a cracker… it was a solid proposal.”

We have taken on debt – a lot more debt that will take years to pull back.

Port Adelaide tonight will play defending AFL champion Richmond in the big league’s last game for 2020 at Adelaide Oval. The winner of this preliminary final will advance to the night grand final at the Gabba against either Brisbane or Geelong.

Some will say the AFL owed the grand final to the Queensland state government for “saving the football season” by hosting AFL clubs in hubs on the Gold Coast and Sunshine Coast while the COVID pandemic shut down sport in Victoria and created hard borders, particularly in Western Australia.

But the AFL – and many others – also owed Daniels and his team at Adelaide Oval for proving sports could be played before crowds again.

That trial, completed without a hitch, was at Adelaide Oval on June 13 with 2240 at the Showdown between Port Adelaide and the Crows.

“We were the test case for Australia,” says Daniels, who still gets calls from around the world from sporting bodies and venue operators wanting advice on how to open their gates to the fans again.

“To get crowds again – after starting the AFL season with no-one at the Crows-Sydney match in March – was huge; it is our proudest moment. We’ve taken calls from all over the world from sports leaders asking, ‘How do we do this?’

“We’re proud Adelaide Oval has led the way through this challenge.” 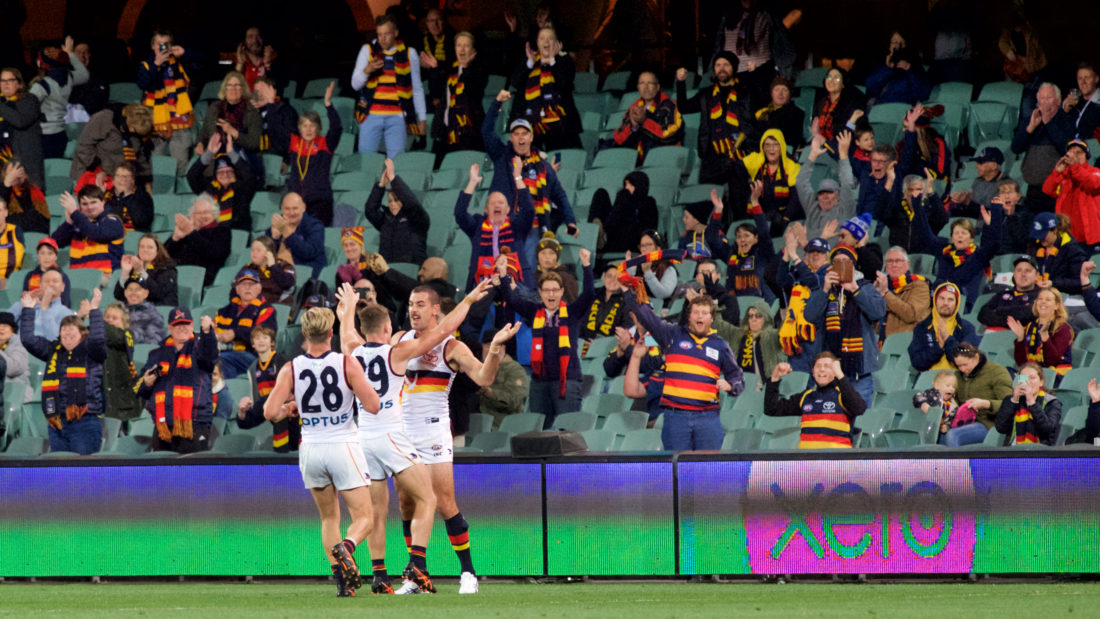 The ability to have crowds at Adelaide Oval this year has attracted attention from across the globe. Photo: Michael Errey/InDaily

Adelaide Oval shut down on March 15. The 180 full-time staff at the Oval and its associate sites, such as the bar at the Festival Centre across the River Torrens, was cut to 28. The 1500 casuals employed for events were all stood down while the AFL went into a 12-week shutdown.

No events, no regular revenue … and still bills for operating the venue, a legislated order to pay $3.2 million to the Oval’s sinking fund for future development and maintenance and a $200,000-a-month outlay for electricity. The State government has excused the sinking fund payment for the moment – the $3.2 million will need to be made up later. The Commonwealth Bank reworked the stadium’s debt facility.

Some bills, however, do not go away, particularly power bills at a venue that is lit up at night to stand as a reassuring beacon for South Australians in troubled times.

Beyond finding revenue streams to pay the bills, the more-pressing social agenda for Adelaide Oval – a local jewel – was to give local football fans more than AFL games on television.

“We had to find a way to safely open Adelaide Oval,” said Daniels. “We would develop plans in the morning and find they were out of date by the afternoon. I had never before met Nicola Spurrier – and from March 15 we were working with SA Health to come up with plans to resume football matches on Adelaide Oval.

“This has been the most challenging year we have ever faced,” added Daniels. “But we are no Robinson Crusoe … the pandemic has put us all in the same boat.”

Adelaide Oval was to have had 22 home-and-away AFL matches this season; it finished with 20 including five without South Australian teams. The stadium budgets were based on at least 900,000 football fans moving through the turnstiles from March to the end of August; in the end, just less than 200,000 were allowed to enter the Oval while SA Health oscillated the safety limit from 2500 to 10,000 to 25,000.

Every positive COVID test – such as the Thebarton outbreak in mid-August – put a together clamp on exemptions at Adelaide Oval for AFL games.

The annual count of 1.8 million visitors to Adelaide Oval – for football or cricket matches and tours – will not be made this year or next. Major concerts from international acts are unlikely before 2022.

“It was complex to shut down Adelaide Oval; and our budgets were gone,” Daniels said. “We were in a battle for survival.”

“We could not call on the taxpayer,” added Daniels who manages a venue built on a $535 million budget from the State Government from 2011-2014. “We have taken on debt – a lot more debt that will take years to pull back.”

This note will create the impression, particularly among Port Adelaide football fans who always want to squeeze the landlord for a bigger financial return from their AFL matches at the Oval, that there could be tension between the SMA, the SANFL and the two SA-based AFL clubs on the carve up of the Oval’s returns. The deal is not due for review until 2022.

We have done everything to help the AFL clubs while they have lost the income from general admission tickets and hospitality events. And they have helped us.

“And the pandemic has made us all more understanding of each other,” says Daniels. “We have learned a lot more about each other’s businesses.”

This certainly should ring true with the Adelaide Football Club. Its new chairman, former state Premier John Olsen, is leaving the Stadium Management Authority board to now fully appreciate both sides of the divide between AFL club and stadium operator. The SMA keeps a former Crows board member with Peter Hurley.

“We have wanted to help all our stakeholders – the AFL clubs, the SANFL and the SA Cricket Association – survive,” adds Daniels. “We have done everything to help the AFL clubs while they have lost the income from general admission tickets and hospitality events. And they have helped us.

“We have put in tighter (less costly) procedures to putting in events at the Oval – and those will go on forever, not just during the pandemic.

Adelaide Oval replaced Football Park at West Lakes as the home of AFL football in South Australia in 2014. Until COVID changed the sporting landscape, the Oval hosted 22 home-and-away games each AFL season and had delivered more fans through the turnstiles than in any season at Football Park.

Since Adelaide Oval replaced Football Park in 2014 as the home of AFL football in South Australia, the average attendance to an AFL home-and-away game at the city venue has fallen each season.

Before the pandemic, the SMA planned to entice fans back with a year-by-year plan to reduce the price of food and drinks.

“It was our way to encourage people back to Adelaide Oval,” Daniels said. “Our long-term plan on catering prices has been rolled out in one hit. It is an expensive decision – one that is on us and not the AFL clubs.

“We must make sure we give people an incentive to come back to Adelaide Oval. When a pie costs less at Adelaide Oval than at the local deli, we’re giving sporting fans more reason to come back.”

Plans for AFL Season 2021 at Adelaide Oval are being made on the basis – while the pandemic continues – for no more than 25,000 fans at games (50 per cent capacity).

“But we will have to operate with full staff and increased security for public safety,” Daniels said. “The cost is best described with a new technical accounting term – ‘ugly’. So it is important we attract other events and functions beyond cricket and football, such as the rugby league State-of-Origin game in November.”

Daniels has noticed a “lot less kids” at AFL games at Adelaide Oval this season. But there has been less trouble on the terraces.

“The reduced capacity has meant the games have been accessible to the core supporters, the true fans,” Daniels said.

Those fervent crowds, particularly the 22,000 excitable Port Adelaide fans who made Adelaide Oval appear to have a full house during the qualifying final against Geelong a fortnight ago, also have been important to what happens on the field. 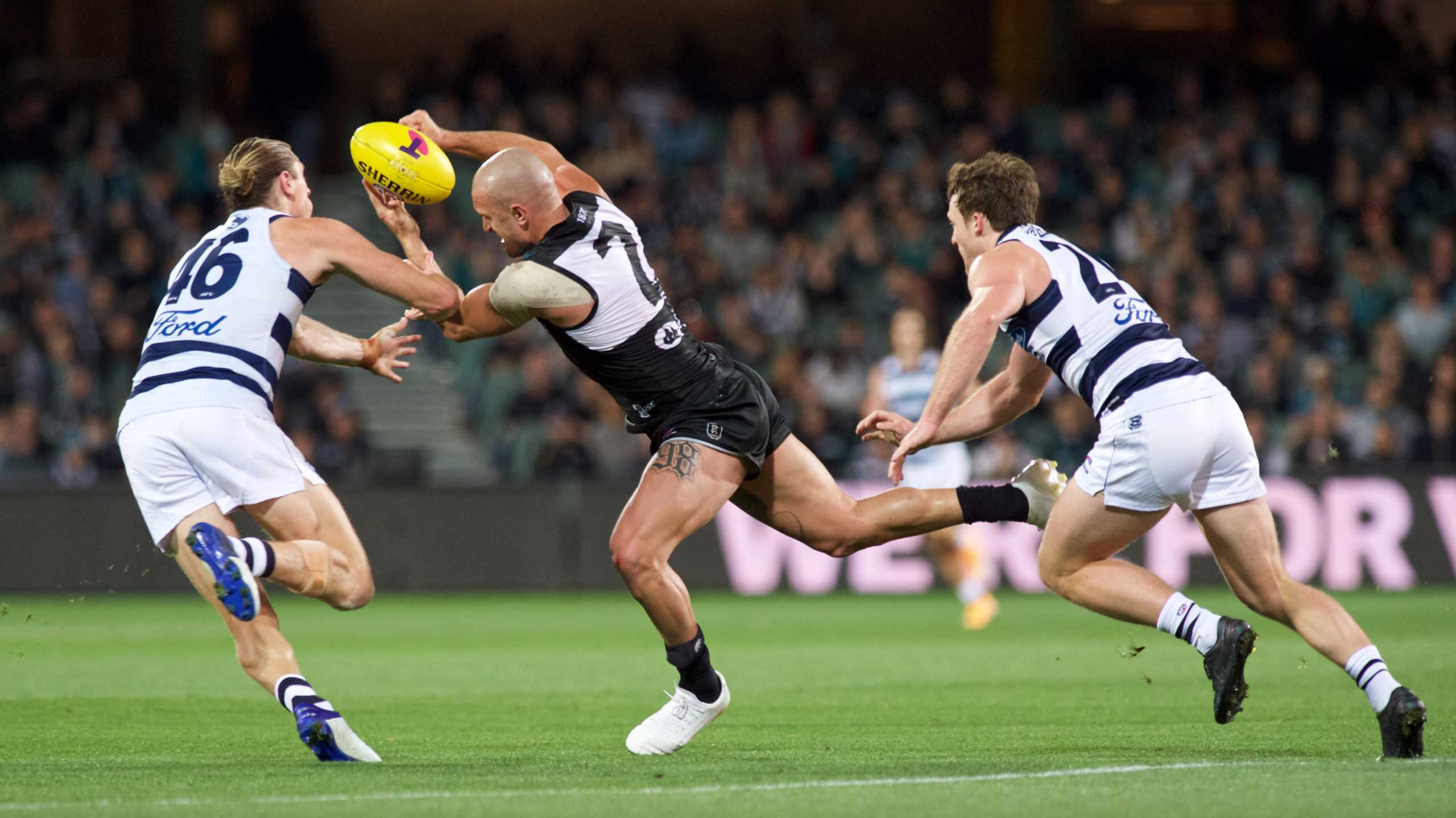 Empty, dull venues in England used for Premier League football matches this month have supposedly contributed to bizarre results, including high scoring in a sport noted for the opposite. British sports psychologist Michael Caulfield told the BBC last week: “Football is a game based on threat, fear, and that has disappeared with no fans in the stadium.

“Plus, teams with a loyal set of fans who back them up miss the arousal of the supporters in the same way Freddie Mercury would miss the audience.”

Port Adelaide, one of those teams that thrives on the energy of its raucous fans, has more reason to be thankful to Daniels and his team for opening up Adelaide Oval.

A year ago Daniels and his SMA executives and directors were before asState parliamentary committee to answer on the plans and funding for a hotel on the eastern side of Adelaide Oval.

The Oval hotel was built with a $42 million taxpayer-funded loan – and much public debate. It has not created a tacked-on look to the Oval’s eastern edge nor has it taken away an inch of grass from the gardens that surround the venue.

It does not go unnoticed that the SMA successfully met timelines for the Oval build while the Adelaide City Council is still to take away the metal barriers around the Creswell Gardens fountain that is still to function.

The parliamentary inquiry has not moved beyond an interim report – and the 138-room hotel is open and helping to save the upcoming cricket season, including the Australia-India Test series, as a quarantine centre. The Australian national team has been in residence since last month.

“We have to diversify our revenue,” Daniels said. “The hotel is an incredibly important part of that plan to generate new revenue. It has been a successful start – and today the hotel is much more important to Adelaide Oval’s business plan.”

An AFL grand final next weekend would have helped too.